There are 54 armed groups at large in the east of the Democratic Republic of Congo (DRC), according to the government, which plans to spend the next five years getting shot of them.

But will the third, US$100 million, attempt at disarmament, demobilization and reintegration (DDR3) succeed where previous bids failed?

“The future of peace and stability in the region” depends to a large extent on the answer to this question being “yes”, according to a recent paper by the Enough Project.

Even before the programme has got properly off the ground, thousands of fighters from various groups have reported to army bases in eastern DRC to take part. They had been prompted by the surprise defeat of the M23 rebellion by the combined forces of the national army and the UN military mission in DRC (MONUSCO) in December 2013, and by subsequent warnings that other groups would soon be targeted.

This Briefing unpicks the issues.

What’s different this time round?

The security context, and some details of the plan itself.

Armed groups have wreaked havoc with virtual impunity in eastern DRC since 1998. Around two million people are displaced from their homes in part of the country which is suffering a chronic humanitarian crisis. The health system in particular is in a “catastrophic state” because repeated armed conflict has led to large-scale dilapidation of infrastructure and frequent interruptions of services, according to a report published on 4 March by Médecins Sans Frontières.

The establishment in 2013 of a 3,000 strong Force Intervention Brigade within MONUSCO proved to be a game-changer because of the specialized support it lent the national army, FARDC, to crush the M23 rebels.The brigade’s aggressive use of combat support helicopters is widely seen as the decisive intervention
Now, MONUSCO's adoption of unmanned aerial vehicles has greatly increased its surveillance capabilities and thereby the chances of other rebel groups being defeated militarily.

Fighters began leaving these groups in large numbers after the M23 formally surrendered. Around the same time, the government began to unveil its plans for DDR3, although it had not then (and has not yet now) secured the required funding from donors.

One important addition in this DDR operation is a preliminary sensitization phase, whereby combatants themselves, host communities, as well as military and civilian authorizes and civil society, will receive detailed information about the entire process.

This is especially significant in DDR3, because the programme’s participants are slated to undergo most of the demobilization process in locations far from their home turf (specifically, in camps in Kamina, North Katanga Province; Kitona in Bas-Congo; and Kotakoli in Equateur).

“Given the lack of trust among some communities and towards the government, sensitization will be vital to convince surrendered militia groups to leave their fiefs in order to undergo DDR in the west and southeast of the country,” DRC analyst Christoph Vogel of Cologne University’s Institute for African Studies wrote on his blog.

Another difference in this third DDR exercise is that only a very few participants will have the option to join the national army; most will be assisted to reintegrate into civilian life. (See below)

“It’s vital to learn from past experiences,” Chantal Daniels, a policy and conflict adviser for Christian Aid, told IRIN. “DDR is not new in the DRC and past projects failed lamentably.”

Why did they fail?

“National DDR programs in the past have failed due to the lack of resources and political will, duration of program implementation time, failure to effectively sensitize armed groups and communities, and failures to properly reintegrate ex-combatants into the military or provide alternative livelihoods,” explained the Enough Project paper.

“Poor demobilization... facilitated recruitment,” according to a recent paper
on Congolese armed groups published by the Rift Valley Institute and the Usalama Project.

In some areas “a large number of current rebel fighters have been through demobilization programmes, only to be re-recruited by rebel groups. Many found no alternative livelihood. Their former leaders pressured them to re-join, or they were prompted to do so by continuing insecurity in their home areas,” said the paper, subheaded Untangling the Gordian knot of insecurity.

“The reintegration stage was especially difficult: it targeted individual combatants and in the communities to which they returned the perception tended to be that those who took up arms were rewarded financially and given vocational training. This complicated reconciliation efforts,” the paper said.

In a 30 January resolution which noted “with great concern the persistence of serious human rights abuses and humanitarian law violations against civilians in the eastern part of the DRC, including summary executions, sexual and gender-based violence and large-scale recruitment and use of children committed by armed groups,” the Security Council demanded the DRC government accelerate DDR3.

"If it is not done fast, those people who surrendered because of military pressure, they will return to the bush and take up their weapons again," Martin Kobler, head of MONUSCO, warned. This appears to be already happening.

“Unclear about what’s ahead, and tired of waiting, a small number of combatants have already left the regroupment sites and returned to their armed groups,” Ida Sawyer, senior researcher with Human Rights Watch (HRW), told IRIN.

She also made a point that underlined the importance of proper sensitization.

An official (in red) from MONUSCO’s Child Protection section screens child-soldiers from the Mai-Mai militia group in a joint operation with the Congolese Armed Forces (FARDC). Hundreds of fighters from various armed groups in eastern DRC have surrender 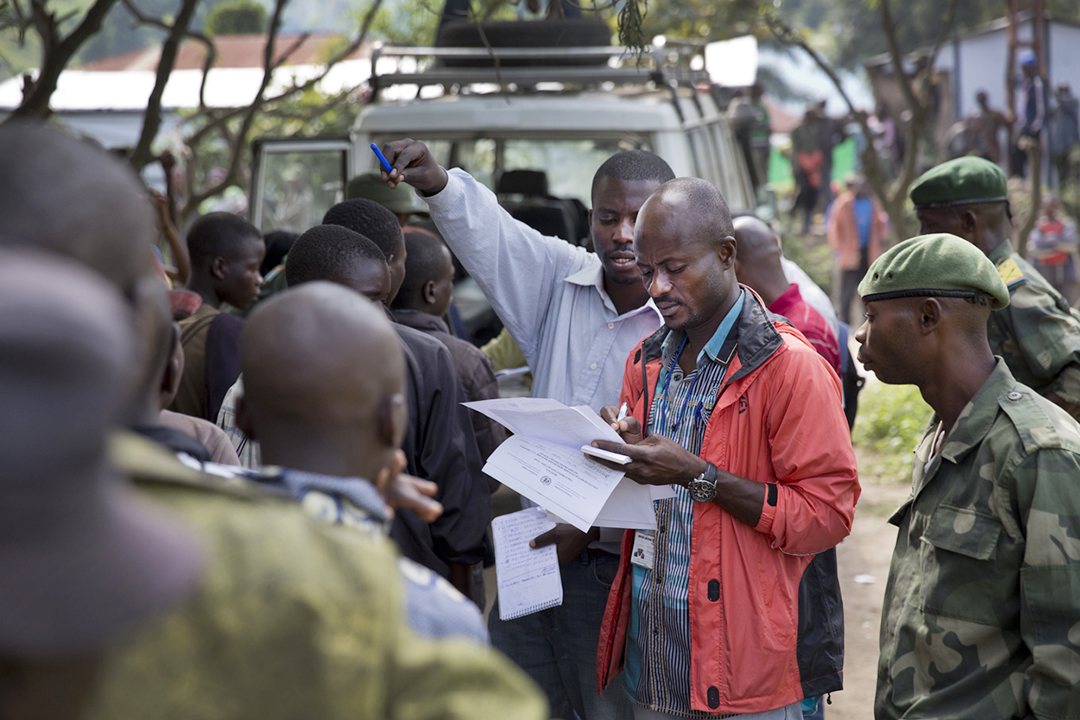 Why is this important?

“DDR 1 and 2 failed because we accepted to integrate the bad elements into our army due to advice from our friends, neighbours and donors. In this DDR3, we shall never, never again accept these criminals in our army,” said DRC government spokesperson, Lambert Mende Omalanga.

“We understand the need for reconciliation, but no army in the world can entertain undisciplined soldiers. We can’t reintegrate elements who mutinied twice,” Mende told IRIN.

“We shall get a few people with a good record to integrate into our army and the rest will be reinserted into the community.”

For analysts such as Vogel, this is a sensible policy.

“Army integration appears not to be on the plate for now, certainly a lesson learned, with past, hastened integration efforts that largely failed to tame insecurity and impunity across the spectrum of conflict actors in eastern Congo,” Vogel wrote.

“In the past, the DRC has allowed the reintegration of individuals in the FARDC whose alleged involvement in the commission of atrocities had been extensively documented,” Sofia Candeias, senior associate and criminal justice coordinator for the International Center for Transitional Justice (ICTJ), told IRIN.

“Today, we know that after their integration in the FARDC ranks, these individuals have allegedly continued to be involved in the commission of serious crimes. The continuous impunity lived in DRC has allowed renewed cycles of violence,” she added.

“While military reintegration has often produced new violence, it can’t be dismissed as an option altogether but must be slowly phased out as other economic alternatives emerge,” noted Timo Mueller, a Goma-based researcher with the Enough Project.

Are donors on board DDR3?

Not quite. Although the broad concept of DDR3 has the backing of the international community and UN Security Council resolutions, donors have not yet stumped up much of the $100 million the DRC government says this operation will cost.

This hesitancy appears rooted in concern over the cost of moving so many fighters so far from their home bases and over lack of details about the reintegration phase - all too often the weak point of DDR programmes all over the world.

“It doesn’t feel like it’s completely ready yet,” said Russ Feingold, the US special envoy for the Great Lakes and the DRC. “You’ve got to have a credible programme for them [the ex-combatants] to go to.”

“We visited one of the facilities for the DDR,” said Feingold. “Things were set up in a way that made it believable that people could be brought there safely and be there for that part - the demobilization. What didn’t seem to be clear in any way was what happens after that. Where do they go? How do they get reintegrated into the community? What about their families?”

Feingold said it was “an open question” whether DDR3 would succeed.

According to Kobler, donors want the programme to be “simplified.”

"MONUSCO is coordinating, trying to establish what are donors willing to fund, and what not," he said.

The European Union (EU) Ambassador to DRC, Jean-Michel Dumont, on a visit to the Bweremana military base near Goma where more than 2,500 combatants have gathered to take part in DDR, said the EU was waiting to see how the government planned to organize the reintegration phase before deciding on its level of support.

“It is a process that has to be voluntary, guided and prepared. So, in fact, I came here partly to see how things were going and to give us an idea of the support we could give to the Congolese government,” he said.

Mende said the government was “ready to work with development partners and agencies”, although he stressed that the ultimate authority rested with the DRC.

“None of them can dictate to us what to do. They must support the programme, as we know what is necessary,” he told IRIN. “We shall implement this programme with the few resources we have if the agencies can’t accept to fund it.”

Why is the ‘R’ in DDR so important?

It’s relatively easy to disarm a combatant and remove him from the ranks of a rebel group. Making that removal permanent is often the most difficult and least successful component of DDR.

“An effective DDR process should not simply remove the guns from the ex-combatants but should go a long way in disarming their minds, which includes equipping them with new skills beyond the fighting mentality and backed by alternative livelihood means,” Stephen Oola, a transitional justice and governance analyst at Makerere University’s Refugee Law Project in Uganda, told IRIN.

“If former combatants have long-term employment in community development projects, such as road building, and receive salaries on a regular basis, they will be much less tempted to return to the bush and re-join an armed group,” said HRW’s Sawyer.

“For this to work there needs to be strong oversight over the programme’s financing and disbursement of funds, as well as long-term community-based follow-up.”

In previous DDR programmes in DRC, the reintegration component was insufficiently funded and sometimes subject to embezzlement.

Is DDR a panacea for a stable eastern DRC?

No. While certainly a prerequisite for stabilizing the region, DDR is widely seen as but one component of wider initiatives, such as the UN-backed Peace, Security and Cooperation Framework (PSCF) for DRC and the region, and the International Stabilization Plan for the Eastern Congo (ISSSS).

The PSCF was signed by 11 African governments in February 2013 in Addis Ababa and sets out the obligations for the DRC government, regional governments, and the international community to act decisively to “put an end to recurring cycles of violence”. ISSSS aims to increase security, political dialogue and state authority, as well as reduce sexual violence, and is implemented by MONUSCO, UN agencies, international NGOs and private contractors.

“If badly managed, a failed DDR means nothing but a repeat or outbreak of new forms of conflict like we see today in South Sudan,” warned Oola.