When the corpses of migrants are discovered in the desert, floating at sea, or in airless container trucks, the official response often includes calls to take action against the smugglers. Following the deaths of over 300 migrants who drowned trying to cross the Mediterranean in October 2013, for example, Italy’s integration minister, Cecile Kyenge, declared, “Behind these tragedies… there are human traffickers who are enriching themselves on the backs of people who are fleeing war and hunger,” and urged increased patrols to target people smugglers.

Statements like Kyenge’s reflect the widely held perception that “human trafficker” and “people smuggler” can be used interchangeably to describe shadowy criminal networks preying on desperate and naïve people. The small number of researchers worldwide who study migrant smuggling say the truth is often less malevolent and more complex.

To begin with, smugglers - unlike traffickers - provide a service that migrants willingly pay for. The definition provided by the Smuggling of Migrants Protocol, which forms part of the United Nations Convention against Transnational Organized Crime, says that service must involve helping someone to gain illegal entry to another country in return for “financial or other material benefit”.

The demand for such services has increased as states around the world have shored up their borders over the last 10 to 15 years, making it more difficult for would-be migrants and asylum seekers to enter countries legally.

In a statement released on International Migrants Day (18 December), the International Organization for Migration (IOM) pointed to the “direct link between tighter border controls and increases in people smuggling”, which it described as a US$35-billion-a-year business.

Noting that at least 2,360 migrants had died trying to cross borders clandestinely in 2013 - the deadliest year on record - IOM suggested that unless the international community takes decisive action to address the causes of irregular migration, “more migrant lives will be lost at the hands of people smugglers and traffickers”.

Gabriella Sanchez, a social and cultural anthropologist who has researched migrant smuggling in a number of countries, disputes the notion that migrants who use smugglers run a greater risk. “Most people who die crossing borders die proceeding on their own,” she told IRIN on the phone from the Border Crossing Observatory, a research centre at Monash University in Melbourne, Australia. “Most people die because of exposure to the elements, not because of violence.”

"Most people who die crossing borders die proceeding on their own"

She says migrants typically think of smugglers as “mechanisms of protection”, who can increase their chances of crossing a border successfully. “Of course, there’s going to be a level of risk, but people calculate their risk… Migrants and refugees are not ignorant or gullible.”

The level of risk migrants are exposed to often depends on how much money they can afford to spend. Those who can buy plane tickets, pay for forged visas and passports, and bribes for customs and immigration officers, are much more likely to reach their destination safely. Migrants who use longer land and sea routes, travelling with different smugglers who may or may not be linked to one another - what the UN Office on Drugs and Crime (UNODC) describes as a “pay-as-you-go” package - run the highest risk of being stranded or exposed to abuse.

Routes from West and East Africa to Europe, and from the Horn of Africa to the Middle East, with their treacherous sea and desert crossings, have become even more dangerous in recent years. Smugglers have increasingly taken to extorting more than the agreed upon sum from migrants, often by means of holding them captive along the way or even at their destination, and forcing them to phone relatives to ask for money under threat of torture. Reports of such abuses, which blur the line between smuggling and trafficking, have emerged from Sudan, Yemen, Egypt’s Sinai desert and Libya.

“What’s happening now is unprecedented,” says Yitna Getachew, a regional thematic specialist with IOM’s East and Southern Africa office in Pretoria, South Africa. “Up until recently, you didn’t see abuse of migrants by smugglers. It’s a business and they have reputations to think of.” 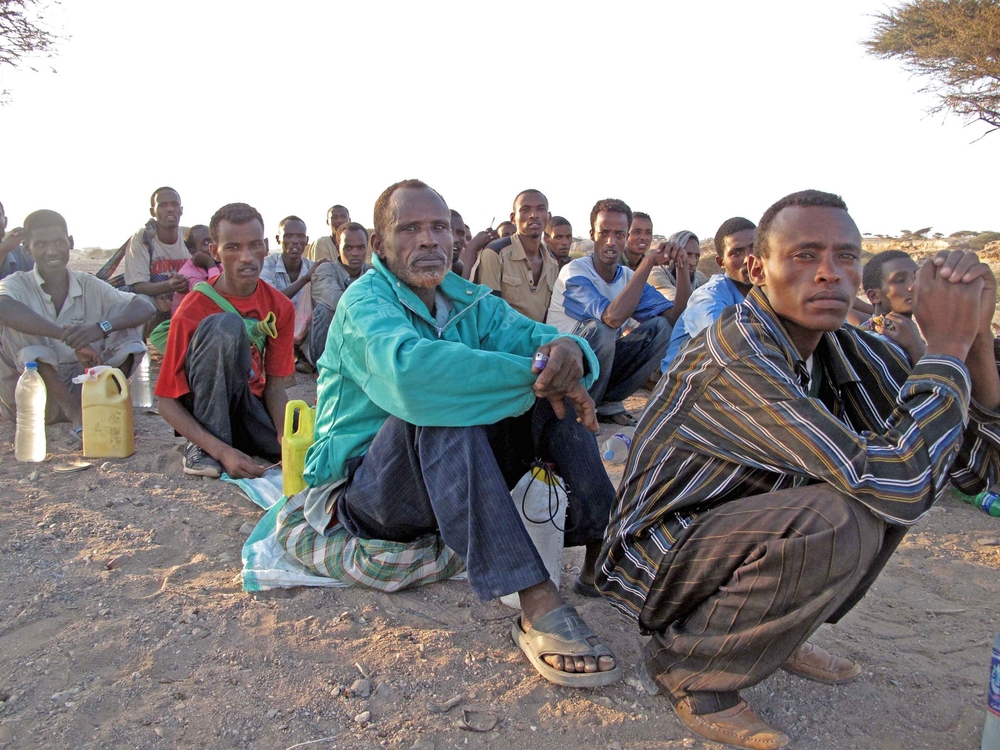 Christopher Horwood, coordinator of the Regional Mixed Migration Secretariat (RMMS) which published a report in June 2013 on migrant smuggling between the Horn of Africa and Yemen, speculated that the large numbers of migrants from Eritrea and Ethiopia have pushed up demand for smugglers’ services, and also the temptation to extort ever larger sums of money. “In the case of Ethiopians and Eritreans, the sums are so large it’s become irresistible,” he told IRIN.

Migrants who experience the highest levels of violence are those who travel “without smuggling references”, Sanchez says. “Most people travel with smugglers who are known to them and recommended by others.”

However, on the long “pay-as-you-go” routes, such as the one from Eritrea to Israel or from Somalia to South Africa, migrants generally only know the smugglers who take them on the first leg of their journey. Thereafter, they may travel alone for part of the way or be passed from one smuggler to another through what Horwood describes as "informal chains" or "loose alliances" that differ from the more organized networks typical of human trafficking.

Those migrants who do experience abuse rarely report it, particularly if they have reached their destination and are trying to steer clear of the authorities. The lack of formal complaints by migrants has added to the difficulties of prosecuting smugglers, who can be difficult even to identify.

“Unlike trafficking, smuggling isn’t done by professionals, it’s done by people who have other jobs. These aren’t arch-criminals, but people who are making money on the side,” said Khalid Koser, deputy director of the Geneva Centre for Security Policy, who has done extensive research on migrant smuggling.

“There’s no profile for a smuggler,” agreed Sanchez. “The smugglers I interviewed in Arizona [near the US border with Mexico] were teenagers who guided people through the desert... you have a single mother of three who was housing people overnight and... grandmothers feeding people.” Migrants may also assist by cooking at a safe house, steering a boat or driving a vehicle in return for a lower fee. This sometimes results in their arrest for smuggling.

“The determination of who is a smuggler is quite problematic. We think about smuggling as becoming more organized and structured, but what we’re actually seeing is how the risk is being transferred onto the migrants and refugees,” said Sanchez. “Most of the people who are prosecuted for smuggling are migrants themselves.”

Even countries that are signatories to the Smuggling Protocol often have no specific legislation to target people-smuggling. Samantha Mundeta, a regional legal adviser with UNODC's Southern Africa office, noted that most countries in her region rely on immigration laws that "tend not to get to the bottom of the crime [smuggling] and the people who perpetuate it", and which are more often used to criminalize migrants.

"There's no attempt to go after the smugglers, it's all about irregular entry by the migrants"

"There's no attempt to go after the smugglers, it’s all about irregular entry by the migrants," agreed Getachew of IOM, who says the lack of capacity and resources in local law enforcement authorities has also hampered efforts to investigate smuggling.

UNODC has set up a voluntary reporting system in Asia that allows countries in the region to collect and share data on smuggling trends and networks. In eastern and southern Africa there is no such system, and “weak coordination regionally on these issues", said Mundeta.

The role of corruption in facilitating almost every stage of a smuggling operation presents another major obstacle. In a paper published recently by UNODC, the authors note that "Migrant smuggling could not occur on the large scale that it so often does without collusion between corrupt officials and criminals."

Smugglers are often able to bribe their way out of trouble, and the combination of corruption and light penalties for the small number of smugglers who are prosecuted has made it “a very attractive activity” for criminals, commented Horwood.

Several researchers IRIN spoke to suggested that the most effective deterrent to smuggling may be fewer border controls, not more. "Countries tend to focus on border security, and that doesn't seem to work," said Koser. "The unintended consequence of more restrictive immigration policy is more illegal migration."

In the West Africa region, where a protocol on freedom of movement allows people living in member states to travel within the region without visas, there is little demand for smugglers. "Smuggling can't operate without restrictions," said Horwood.

However, the political sensitivities that inform debates about irregular migration around the world make it unlikely that such mechanisms will be introduced in the near future. As long as public sentiment remains anti-immigration, governments will continue to make it more difficult for migrants to enter their countries legally, perpetuating the demand for smugglers.