A fresh outbreak of violence between communities in northern Kenya’s Moyale area – in Marsabit County - has displaced tens of thousands and led the government to take the almost unprecedented step of deploying its troops domestically in an effort to quell the unrest.

The violence, which has broken out intermittently since late 2011, has paralysed business and transport activities.

The attacks have often been abrupt in nature, targeting people at work or who are travelling, according to a 9 December Kenya Red Cross Society (KRCS) update .

There have been incidents of roads being barricaded, as well. On 28 November, transport between Moyale and Nairobi was cut off after the road was blocked at the Turbi area for over 10 hours, notes KRCS.

What is the current humanitarian situation?

As of 11 December, at least 72,000 people in Moyale have been uprooted from their homes,  according to KRCS, which notes that about a third of the displaced families have crossed the border into Ethiopia, after violence left at least 30 people dead in the previous week.

"More than 10 settlements have been completely deserted. We found no single soul in all the areas hard-hit by the clashes. All families have left and fled," Tom Omolo, KRCS’s regional disaster coordinator, told IRIN.  Some of the abandoned areas include the villages of Arosa, Butiye, Funanyata, Kote, Oda and Sololo.

Wario Lakicha, whose family is among those that have fled into Ethiopia, said: "We are suffering. Nobody is helping us. In some cases, more than 30 people are sharing one house; a large number are being hosted by relatives."

Also newly in Ethiopia, Wario Golicha, who fled the village of Butiye, told IRIN that his family is living in a flimsy structure made of polythene. For a toilet, the family is using the open fields. "We have no water, no food, no blankets, mosquito nets or bed, and sleep in darkness. My children have no clothes - they left them all as we fled," he said.

We have no water, no food, no blankets, mosquito nets or bed, and sleep in darkness. My children have no clothes - they left them all as we fled

Several families have been camping at the Sololo Police Station, on the outskirts of Moyale town, since their houses were burned down. Moyale town has also been affected, with transport paralysed a week after some vehicles there were torched.

Abdi Wario, a Moyale trader, spoke of the hardships businesspeople are undergoing. "No vehicle has left Moyale for a week now. Some retail traders have nothing to sell. In my case, I have a lot of goods to sell but no buyers,” he said.

Livestock trade in the predominantly pastoral area has similarly been affected.

A health worker in Moyale, who preferred anonymity, said he had fled work due to threats. "Heath facilities have been closed. Health services has been disrupted and suspended in some areas because the nurses and clinical officers have also been affected by the conflicts and threatened," he said.

Who is fighting whom?

The violence in Moyale is pitting the Borana and Gabra communities against one another.

A resident, Mbarak Haji, said that the Borana community has been targeted. “We are on self-defense. Our people have been attacked and our houses are being torched in a well-planned scheme to displace us,” he said, adding that deadly clashes have persisted in Marsabit for more than three years due to a failure to arrest leaders who openly plan attacks.

Moyale is located in Marsabit County.

An elder from the Gabra community, however, blamed their rivals, saying that the clashes are aimed at paralysing county development activities.

Why are they fighting?

The Borana and Gabra communities have perennially clashed over access to resources such water and pasture, as well as raiding each other’s livestock.

Indeed, cattle raids have been attributed to some of the recent attacks, according to KRCS. On 24 November, for example, a cattle raid was recorded in the Qate area, home to the Borana, leading to a fire-fight between the two communities. One person died. 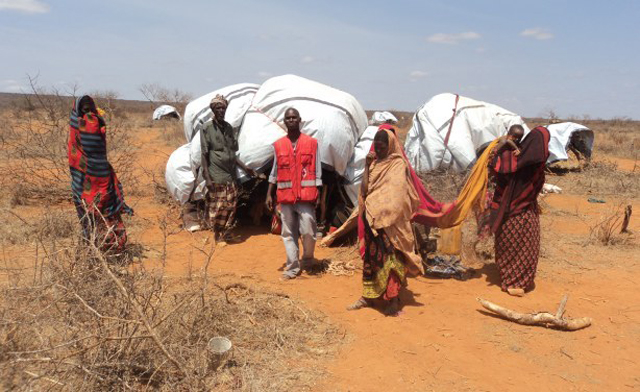 In the recent past, conflict has intensified amid the process of devolution, which has brought government resources down to previously neglected regions, making land boundaries and political positions increasingly contested.

In Moyale, security officials and residents attribute some of the violence to the local county government’s allegedly skewed process of making appointments and awarding contracts. On 9 December, the Marsabit County Commissioner, Isaiah Nakoru, accused politicians of fuelling the conflicts, which have left more than 100 dead since January.

According to Balesa Habule, a civil rights activist, the spike in conflicts in Marsabit presents a new pattern of violent clashes in under-developed northern Kenya , which has suffered decades of cattle rustling and clashes over pasture and water.

"A devolved system of governance is what the region has been yearning for… The constitution acknowledges that this region has been neglected for long [and has] granted us equalization funds and resources. We either seize the opportunity or lose it,” said Habule.

The discovery of natural resources such as oil has further upped the stakes in northern Kenya, where mega infrastructure development projects are underway.

Are there any external actors?

On 9 December, local Borana leaders, led by Ali Rosa, the Moyale Member of Parliament, accused Kenyan and Ethiopian security forces of stoking the conflict to punish the community over their alleged support to the Oromo Liberation Front, an Ethiopian rebel group.

Commissioner Nakoru dismissed the reports, but he confirmed that Kenyan forces are liaising with Ethiopia to flush out militants.

Often, there are concerns that Gabra and Borana militias from Ethiopia may cross the border into Kenya to reinforce their kinsmen, escalating conflict.

What has been the response, both security and humanitarian?

Hundreds of Kenya Defence Forces soldiers, as well as regular police, have been deployed to Moyale and to other northern areas that have recently experienced conflict, such as the Samburu, Turkana and West Pokot counties, following recent parliamentary approval.

In Marsabit County, so far, some 52 people suspected of involvement in acts such as fighting, burning houses and barricading roads have been arrested, according to Commissioner Nakoru.

On 4 December, KRCS provided first-aid services for the injured following an attack on a lorry in the area of Holale, which left the driver and three people with limb injuries. KRCS has been evacuating the injured to various hospitals for treatment. As of 9 December, KRCS had helped to transfer at least 27 people to various hospitals within Moyale.

Tension remains high in Moyale, with suspicion rife, according to KRCS’s Omolo. KRCS has initiated a reconciliation and peace process with the leaders of the warring communities.

Non-food items have been distributed to some of the affected households in the Sololo and Turbi areas. KRCS is also conducting an assessment to establish an accurate number of those displaced to help resettle them.