The rapid deployment of engineers by international and national telecommunications companies to hard-hit areas of the Philippines in the wake of Typhoon Haiyan demonstrates the private sector’s increasingly vital role in relief efforts.

With more mobile phone subscriptions than people in the Philippines (107 mobile phone subscriptions per 100 people), and industry estimates of at least one billion text messages sent daily, analysts say the telecommunications industry is not only able to re-connect the estimated 3.8 million displaced people with their families, but is also an ideal vehicle for raising relief funds.

Philippine mobile carriers Globe Telecom and SMART Communications together control 99 percent of the national mobile phone industry. “We worked with various government agencies and even the military in order to get network equipment parts and infrastructure up and running,” said Ma Yolanda Crisanto, Globe's head of corporate communications.

Within five days of the typhoon, engineers had restored the mobile phone network of three humanitarian hubs in and near the city of Tacloban, the epicentre of the storm damage, where all of its 138 subdivisions were affected and nearly 206,000 of the city’s estimated 221,000 population (2010 figures) are displaced. In less than one week, 59 percent of mobile coverage had resumed citywide.

“At least we are able to talk to our people in the cities,” Gwen Pang, the secretary general of the Philippines Red Cross, told IRIN. “It is helpful to the extent of getting in touch with our operators, but not helpful for communicating with beneficiaries,” she said.

On 20 November, the Red Cross noted that only around 20 percent of total mobile coverage to affected areas— spanning eight islands— had been restored, according to Pang.

Since then, companies have been working hard to re-establish coverage in the hardest hit areas, according to the GSMA, and on 27 November, Globe and SMART reported that they had restored 85 percent and 88 percent, respectively, of mobile coverage in the worst affected areas, including parts of Tacloban and Leyte.

Globe has also projected full restoration of its total network by the year's end.

Three telecommunications terminals, established near humanitarian hubs in Tacloban City Hall, Tacloban stadium (now used as an evacuation centre), and Cebu airport (about 160km southwest of Tacloban) are fully operational, according to a public-private partnership based in Luxemburg, emergency.lu, which provided three rapid deployment kits to local telecoms operators, including an inflatable satellite system that operates as a network on its own.

“Equipment and teams were pre-positioned to respond to network disruption and damage, but the impact of the typhoon was much greater than anticipated,” said Reid. Restoring mobile service has required finding fuel for generators, importing equipment, and navigating debris-strewn roads.

“The extent of devastation wrought by the recent super-typhoon has prompted a review of the engineering and design of… [the] network,” said Globe's Crisanto.

In more remote areas, such as Samar island, there is still no signal, making it difficult for humanitarians to assess damage and reach populations, according to the International Federation of the Red Cross (IFRC).

Cesar Esguerra, a 60-year-old devout Catholic, shows off his mobile phone and a portrait of the Virgin Mary at his flood-damaged home in Pasig, a suburban area east of Manila. Floods swept through much of the capital at the height of Tropical Storm Kets 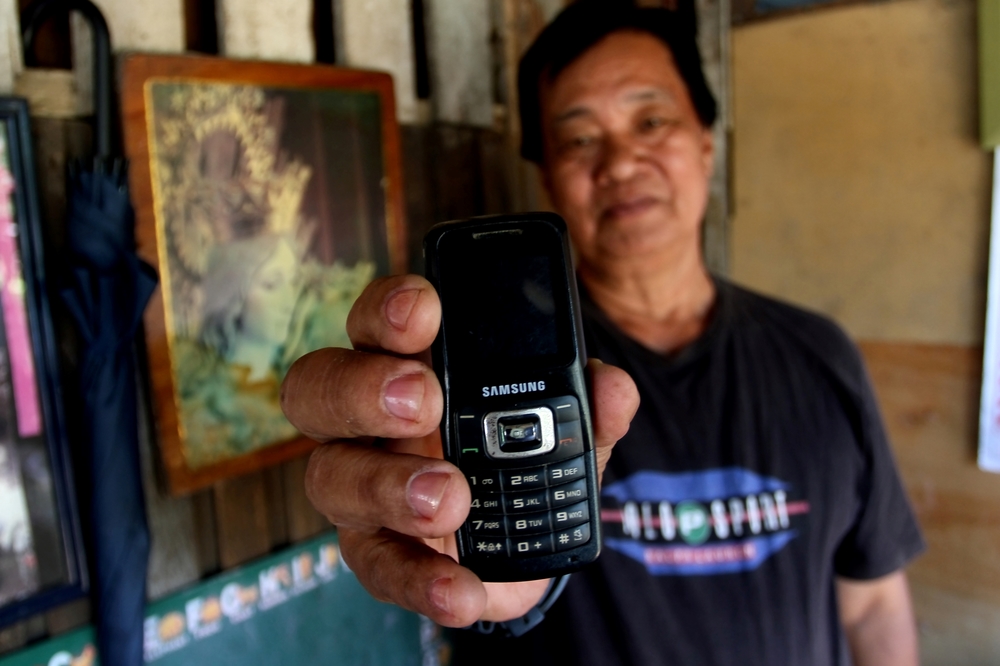 “We want to restore links between families [but] in other areas there is no signal. We want to establish a database for all those who are alive and well,” said Pang, who added that Red Cross staff in remote villages have had to walk for up to two hours to the closest town with a mobile signal to make calls.

Electricity has not been restored in most of the affected municipalities, so even if mobile phone companies can re-activate coverage, people cannot charge their phones without a generator.

“My family still has no electricity so I can only reach them when they have charged their phones at a generator in the village,” said Jocelyn Barredo, 51, from the village of Agbalo, which is usually a 45-minute drive from Roxas City, the nearest urban centre. It took five days after the typhoon made landfall before Barredo could reach her family from Bangkok, where she works as a nanny. “I am just so grateful they are safe,” she said.

At least 917,000 Filipinos work overseas, according to 2012 government statistics.

“The first thing I do when I hear about storms is to call or text message my family back home,” said Jay Allen, 31, a Filipino musician from Buenavista town, near the storm-prone northeastern Surigao del Norte province of Mindanao island, who now lives in Bangkok.

Anticipating an influx of calls that could congest systems during recovery, phone companies offered 25 free text messages daily for subscribers from 13 to 17 November in seven of the affected areas, according to local news sources.

“Text not talk” is the message companies need to give consumers in the immediate aftermath of a disaster, Reid advised, because text messages crowd the system less.

Globe has also allowed customers to defer payments until the end of February 2014 and re-launched its ‘Bangon Pinoy’ (Stand up Filipinos) campaign, started in 2009, which collects donated relief goods at its stores.

“ I don't think there's any conditioning possible, though, to be able to accept the stench of decomposing human flesh ”

Electronic funds can be sent to the Red Cross either via text messaging or through a smartphone “G-Cash” application that has added the Red Cross to its donations list.

National operators and private international dispatchers have worked beside aid workers in harrowing circumstances. Many international mobile response teams have undergone training for emergencies, according to a staff member from the UN Emergency Telecommunications Cluster (ETC), which provides IT and telecoms services to aid workers post-disaster.

“I don't think there's any conditioning possible, though, to be able to accept the stench of decomposing human flesh,” Mariko Hall, the World Food Programme representative in the ETC wrote in a 15 November blog post after travelling to Tacloban with private sector counterparts.

“Typhoon Yolanda has been a big learning experience for the mobile operators in the Philippines,” said the GSMA's Reid. “And there will be many applicable lessons for the wider mobile industry and its partners.”