Read about what we achieved.
ODDUSSUDDAN

Nearly two weeks after  the Tamil National Alliance’s (TNA) resounding victory in a local election  in Sri Lanka’s Northern Province, analysts and voters are debating  what the party will be able to achieve as the province recovers from more than two decades of a brutal civil war.

By the end of polling on 21 September, 67 percent of 719,000 eligible voters had cast their votes in the north’s first provincial election - long-awaited by international donors and local political activists - since fighting ended in 2009.

The TNA, the party with the largest representation of the ethnic Tamil minority in parliament, won 30 out of the 38 seats on the Northern Provincial Council; the governing United People’s Freedom Alliance (UPFA) secured seven. The Sri Lanka Muslim Congress won one seat.

The TNA campaigned for more political autonomy for the north, while the UPFA appealed to voters with its massive development campaign for the province. The region was devastated during two and half decades of sectarian violence that followed demands by Liberation Tigers of Tamil Eelam rebels for a separate Tamil state.

Despite its overwhelming victory, the TNA will dominate a council that is largely impotent under the control of the provincial governor, who is appointed by the president. According to the 13th constitutional amendment that established the provincial councils in 1987, the governor is the only official with executive powers, including control of provincial spending.

Top TNA leader Rajavarotiam Sampanthan has criticized the governors of the Northern and Eastern provinces as “laws unto themselves”, accusing them of deciding on provincial affairs without consulting locally elected representatives.

Power, but to whom?

Even before the election, few analysts saw a TNA-led provincial administration as a substantive devolution of power.

“The general view of voters is that …the Northern Provincial Council will have no autonomy, with the chief minister [the council’s top elected official] serving as a messenger of the governor, who in turn is the messenger of the president,” said a pre-election report released by the national election monitoring body the Centre for Monitoring Election Violence on 20 September.

But any path to power needs its starting point, say TNA leaders.

“The election is a means to work towards meaningful power devolution,” said TNA parliamentarian Abraham Sumanthiran.

According to Jehan Perera, executive director of the Colombo-based National Peace Council, despite the constitutional imbroglio, the newly elected council may play a decisive role in northern politics and development.

"The general view of voters is that …the Northern Provincial Council will have no autonomy, with the chief minister [the council’s top elected official] serving as a messenger of the governor, who in turn is the messenger of the president"

“Right now the discussions are taking place at the parliament or at donor-level, but the provincial council has the potential to become the best forum for discussion and possibly decision-making on provincial affairs. Its immediacy to the province can make the process faster as well as better informed,” he said.

The largely top-down process of managing the north now means issues are not addressed quickly, with information filtering through several layers of bureaucracy in multiple departments, Perera said.

However, he added that the TNA-led council needs to be mindful to not allow political demands to overshadow basic needs, like employment. “It [the council] would have to strike a delicate balance.”

The TNA has said it will use its victory to enforce hitherto ignored provisions of the13th amendment, which give control of policing and local economic planning to provincial councils.

In addition TNA leaders have said they will push to expand provincial powers. But in order to do that, they would need to repeal the 13th amendment and support a new amendment.

But scrapping the amendment and replacing it with one that grants provincial councils more authority is unlikely, according to analysts in neighbouring India, which helped broker the amendment that created the councils through the 1987 Indo-Sri Lanka Peace Accord.

The accord set up provincial councils as a way for the state to share power with the north; a long standing grievance of minority Tamil parties has been that power is concentrated at the national level, marginalizing ethnic minorities. Over 90 percent of the voters in the north are Tamil, Sri Lanka’s second largest ethnic group.

India has strong interest in the situation due to ethnic ties between Tamils living in India - where they form close to 6 percent of the population - and Tamils in Sri Lanka. ButRamani Hariharan, who was head of intelligence for the Indian peacekeeping force based in north and east Sri Lanka from 1987 to 1990, told IRIN that though India took on Colombo to advocate for Sri Lankan Tamils last time, it is unlikely to do so now.

“It comes at an inconvenient time for India,” he said, noting that, with national elections to be held in 2014, India is less willing to risk potential humiliation if Colombo does not agree to expand provincial powers.

They voted in TNA. Now what? 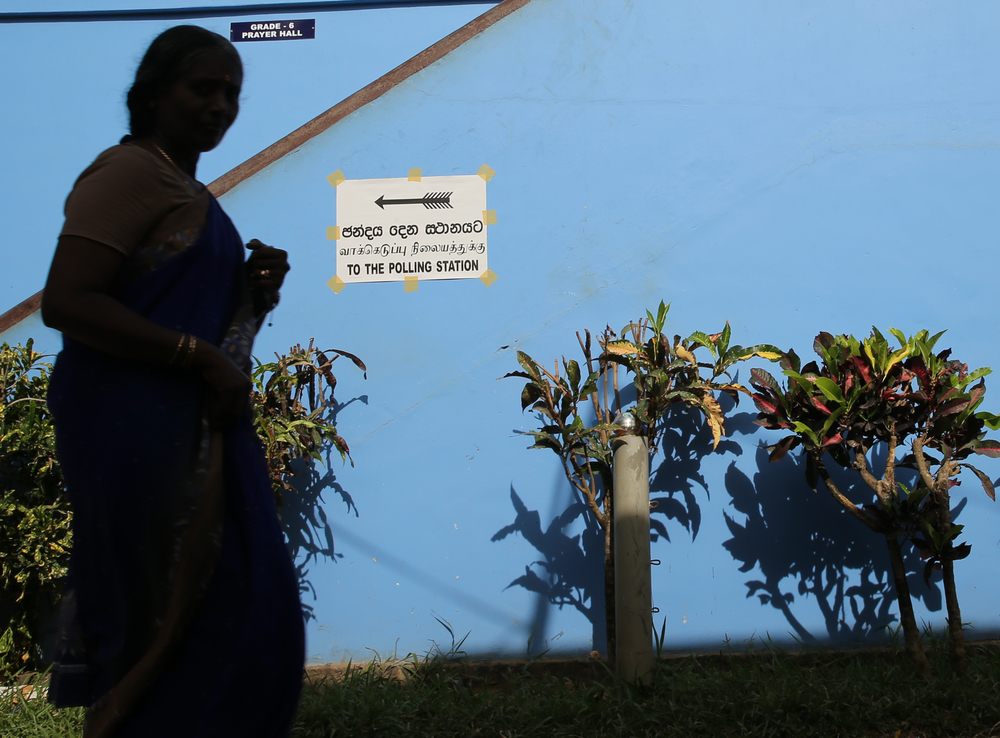 Analysts also predict that India will not want to call attention to dissatisfaction with the current amendment so that its role in negotiating power sharing is regarded as an accomplishment.

The TNA has also indicated it will try to raise development funds outside of Sri Lanka, particularly from the global Tamil diaspora - estimated to be some 700,000 people, mostly concentrated in Canada, the UK and the rest of the European Union - to invest directly in the province, without going through the national government.

But since 2009, when the government created the Presidential Task Force (PTF), the state has controlled all humanitarian and development activities in the north.

“Mainly the Task Force is…to coordinate activities of the security agencies of the Government in support of resettlement, rehabilitation and development, and to liaise with all organizations in the public and private sectors and civil society organizations for the proper implementation of programs and projects,” said a government announcement.

Run by the Defence Ministry, PTF approves all humanitarian and reconstruction work in the north.

However, according to national human rights activist, Ruki Fernando, since no “clear law” created or sanctioned the task force, “it would not be illegal for anyone to bypass that body”, setting the stage for a potential power struggle over who controls humanitarian and development work in the north.

Pushing political demands aside, Muttukrishna Sarvananthan, who heads Point Pedro Institute of Development, based in northern Jaffna, advised the newly elected council to focus on jobs by developing the region’s agriculture and fisheries sectors, the main sources of income for northern residents.

“Raising the voice for more devolution should be a low priority for the newly formed Northern Provincial Council. It is not only the central government but the provincial government as well that should get its priorities right. People are more interested in livelihoods and day-to-day issues.”

The Central Bank estimates the government has invested more than US$3 billion in infrastructure since the end of the war; critics say this multi-billion dollar development has largely been out of step with residents’ needs.

"When the northern people were asking for bread, [the Mahinda] Rajapaksa government offered them cake"

Sarvananthan said that while there is urgent demand for jobs, the government’s main focus has been almost exclusively on highway development and boosting power supply to main towns.

“When the northern people were asking for bread, [the Mahinda] Rajapaksa government offered them cake,” he told IRIN.

“Big roads are ok, but we need money to take the bus or to buy a motorcycle to ride on them,” said 21-year-old first-time voter Nishanthan, who goes by one name, from the village of Oddusuddan in the north’s Mullaittivu District

Kumaravadivel Guruparan, a lecturer in the Department of Law at the University of Jaffna, said the vote was a signal of deep-rooted disappointment with state policies.

Despite massive infrastructural repair and the recent extension of train service to the north for the first time in 24 years, voters were expressing their discontent, Guruparan explained, with the state’s continued military presence in the province.

But then there are the 82,000 residents who voted for the ruling party, like Ramalingam Sudhaharan from Dharamapuram, a village in Kilinochchi District, who said that, given the post-war devastation, what has been achieved in the last four years has been “remarkable”.

“We have good roads for the first time in my life, a very good hospital in Kilinochchi [town], new power stations. Jobs [are] the next logical step, and they will come with time,” he added.

Meanwhile, Sarvananthan from Point Pedro Institute said told IRIN via email that even with limited powers the council can still create  change, for example, by passing an equal opportunities law to benefit the estimated more than 40,000 female-headed households in the province.

“Northern Provincial Council could show the central government the correct [and] genuine path to reconciliation in lieu of building a sports stadium to international standards or constructing eight-lane highways (four lanes in each direction) in [Mullaittivu] District where [the] cattle population outnumbers human population,” he said.