This year, the two most powerful men on the globe, presidents Barack Obama and Xi Jinping, both embarked on Africa tours, pledging to increase aid and investment and work with the continent to improve development.

While this was Barack Obama's first extended tour of Africa since taking office (he made a one-day stop in 2009 in Ghana), Chinese leaders have been visiting the continent regularly for decades, quietly working on joint development, trade, foreign direct investment and assistance projects.

Since 2000, China has ramped up its aid to Africa, leading to significant interest in and speculation over its motives for doing so. With each FOCAC meeting, China has doubled its pledge to Africa, promising US$5 billion in 2006, $10 billion in 2009 and, at the 2012 summit, $20 billion.

A long history of aid

As Chinese officials are at pains to point out, China has a long history on the continent. Its first major project was the 1,860km Tazara rail line. The five-year scheme, completed in 1975, linked landlocked Zambia to the Tanzanian port of Dar es Salaam, ending Lusaka’s dependence on minority-ruled Rhodesia and South Africa.

"China historically had a robust ideological engagement with Africa, reflecting the revolutionary spirit of its foreign policy under Mao, but it didn't have any substantial economic interests in the continent," Daniel Large, professor at the Budapest-based Central European University (CEU) and a leading expert on China-Sudan relations, told IRIN.

What is different today is that it now has economic interests, in addition to being an aid donor.

"Given some of the more inflated claims about the impact of China in Africa, often contained within arguments about a 'new scramble' or 'new imperialism', there is a marked gap between the perceptions and exaggerated projections of an inexorable Chinese rise in Africa and knowledge of how this is actually playing out," wrote Large.

Some of the confusion, especially relating to aid, may be because China does not release many statistics about how much aid it gives and has a number of agencies responsible for distributing foreign aid to Africa. The structure of China's economy - where many private firms are fully or partly state-owned - and China's approach to assistance also blur the line between investment and aid.

So how much aid is there?

Quantifying the China-Africa relationship is a difficult undertaking because China does not break down its statistics or release detailed reports about how much assistance it gives to Africa, and it has a different definition from the Organization for Economic Cooperation and Development (OECD) of what exactly is meant by "aid". For example, China includes military aid in its definition, while the OECD does not, but China does not consider scholarships to students from developing countries as foreign aid when calculating statistics.

As a result, estimates by experts on just how much China gives to Africa differ widely, ranging from $580 million to $18 billion a year.

The Chinese government argues that it does not have the capability to make the data available.

"There is an assumption in some of the Western media - and to a lesser extent the African media - that the Chinese government has lots of data that it refuses to make public. It is important to ask the question - how accurate is the data we have?" said Ambassador Zhong Jianhua, China's special representative on African affairs, in an interview with the African Research Institute, published in August. "The government's statistical capacity is that of a developing country."

In 2012 and 2013, China AidData, in partnership with the Centre for Global Development, came up with a database to measure how much aid was being dispersed, using media-based sources. It classified Chinese-funded development projects into "official finance", which includes projects in four categories: those similar to Official Development Assistance (ODA), those similar to Other Official Finance (OOF) - both of which OECD indexes use - Official Investment (made up of foreign direct investment and joint ventures), and Military Aid without Development Intent.

Their database includes 1,673 non-investment projects to 50 recipient countries from 2000-2011, which they classified as ODA- or OOF-like. Over the course of these 11 years, they found these projects totalled $75.4 billion.

“In terms of the number of projects, sectors like education and healthcare were at the top of the list," he added. Infrastructure, transport and energy were also areas where China had a very large presence.

While most academics believe that transparency on Chinese aid is improving, it still falls far short of the OECD, which releases detailed reports.

"There's still some secrecy in the official statistics," said Xue Lei, a research fellow of Shanghai's Institutes for International Studies, noting that transparency and reform is something being discussed by academics domestically, too. "Maybe we need one structure, and more transparency on the statistical side. I think in the next few years China will release the actual number."

Those favouring reform point to the need to set up a single agency with responsibility for aid programmes. For inspiration, many look to China's Asian neighbours, arguing that taking a model from Japan, South Korea or India could be successful.

As China gets more involved in Africa, non-conditional aid is becoming a hugely important form of soft power for the country. But many are unsure whether China will be able to maintain its principle of non-interference in another state’s affairs should it need to protect its citizens in volatile areas on the continent; it is estimated that there are between 500,000 and 800,000 Chinese migrants residing on the continent.

Xue believes that the principle of non-interference will not change, and that China's approach will be a long-term, stability-through-development approach. "We want to try to stabilize the fragile states, to maybe prevent the crisis or conflict from happening," he said, while acknowledging that this would not always be possible.

"This whole mantra of non-interference and mutual cooperation is not unique to China. It is part of a broader south-south cooperation agenda and rhetoric," said Warderdam. Reconciling this in crisis situations, he believes, will be very difficult. 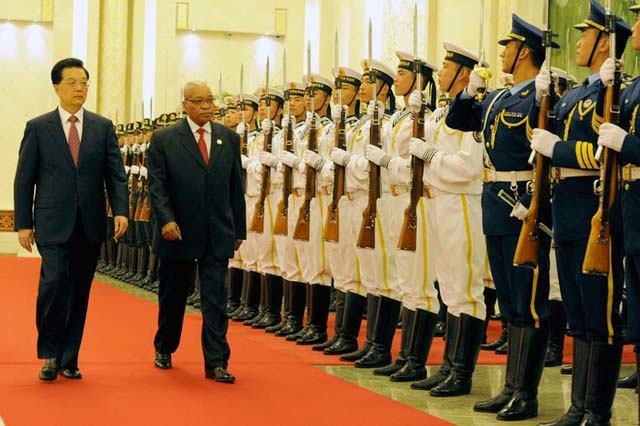 Underpinning much of the criticism of China's role in Africa is the claim that they are only interested in extractive industries and are plundering the continent's vast resources. They've attracted prominent critics, notably Nigerian Central Bank Governor Lamido Sanusi and South African President Jacob Zuma.

"Africa is now willingly opening itself up to a new form of imperialism," Sanusi wrote. "China is no longer a fellow under-developed economy - it is the world's second-biggest, capable of the same forms of exploitation as the west. It is a significant contributor to Africa's deindustrialization and underdevelopment."

Hong Kong University professor Adams Bodomo disagrees with Sanusi, believing that his colonial comparison is flawed. "We are in a world where everybody has their competitive advantages… We have minerals, they have manufactured goods," he told IRIN. "In fact, the presence of Chinese manufactured goods in Africa is an opportunity for African manufacturers to up the ante, to compete. We need competition; we can't talk about free market and then not like competition."

Kenneth King, professor emeritus at the University of Edinburgh who, for his new book, China's Aid and Soft Power in Africa, travelled across Africa with his wife and interviewed more than 200 people on the continent, also dismisses claims that Africans consider the Chinese to be neo-colonialists. "There are differences in perceptions, but they are remarkably positive," he said, claiming that they had not noticed much antagonism towards China from people on the ground.

But there is no denying that, at the local level, tensions sometimes run high.

In 2010, when Chinese managers shot at coal miners in Zambia after a labour dispute, the incident sparked outrage across the country, and Michael Sata, then the opposition leader, used anti-Chinese sentiment to rally support for his presidential campaign. Similarly, in Lesotho, protests and resentment for Chinese migrants have occurred.

Earlier this year, tensions between China and Ghana increased over allegations about illegal mining, leading to the Ghanaian government deporting more than 4,500 Chinese gold miners.

"The miners in Ghana - this is very bad for China, and the Chinese government is very upset about this," said Ward Warmerdam, a researcher at the International Institute of Social Studies in The Hague and an economic researcher at the think tank Profundo. He explained that while the government tries to influence the business practices of private Chinese firms in Africa through a series of directives on foreign direct investment, they are unable to influence companies that are not at least in part state-owned or reliant on funding from the government, nor individuals who migrate to Africa on their own.

"These are companies and actors that it doesn't have an influence over, and this is going to be a big problem for China," he added.

CEU's Large cautioned that it is necessary to disaggregate core principles of mutual cooperation and non-interference, to see how they meaningfully impact more than just the elites in recipient states. "On win-win and mutual benefit, these should be taken seriously, as constitutive of genuine convictions,” he told IRIN, “but at the same time seen as liable to more instrumental uses.”

The real question to ask is whether Chinese aid and development policies benefit the population at large, not just leaders. “Just as OECD DAC [Development Assistance Committee] principles or human rights can be subject to all sorts of uses, the same is true of China's principles," he said.

According to Xue, there is much that China can learn from the West: "Building a tall building is relatively easier compared with more in-depth knowledge of the country and their needs. We can learn from Western experiences in this," he said.

He believes that China has the opportunity to build a stronger network of NGOs and grassroots projects in Africa that may have more impact on everyday people, something that they have thus far steered away from in favour of larger state-to-state projects: "We are gradually increasing aid provided to other institutions, but a large part of the aid is still provided in bilateral aid."

But, he said, "China's aid policy is still gradually evolving."

Warmerdam agrees, but believes that in that process of evolution, it is crucial for African leaders and states to have a greater stake in the decision-making. "The cogs aren't in place, and the dynamics of this relationship aren't set yet," he said. "It's good for African leaders to be careful."