More information about groups vulnerable to HIV infection during emergencies - including those labelled “most at-risk populations” (MARPs) - is needed to improve humanitarian HIV programming, experts say.

“In tense situations where everyone is watching everyone else to see what other people get their hands on, social stigma and stratification are intensified and MARPs may experience heightened versions of whatever forces were marginalizing them to begin with,” Gary Jones, security and humanitarian adviser for the UN Programme on HIV/AIDS (UNAIDS), told IRIN.

MARPs include men who have sex with men (MSM), sex workers and their clients, and people who inject drugs (IDUs).

As unmarried men without children, MSM have not been considered a priority for food aid, shelter or any other kind of assistance in several emergency programmes that typically identify women and children as the most vulnerable.

For example, in the aftermath of the Haiti earthquake, some MSM in camps for internally displaced persons (IDPs) were not able to access food rations because well-intentioned distribution schemes targeted women only (on the basis they would more equitably distribute the food within the family) making it impossible for men to join queues.

But this criterion inadvertently excluded MSM and transgender people who had been rejected by their families - and who were living in a family with no adult females, reported the International Gay and Lesbian Human Rights Commission (IGLHRC).

HIV risk is increased by social marginalization and punitive laws, but is typically mitigated through targeted, locally tailored services, such as safe spaces provided by community centres or established social networks, often in short supply during emergencies.

Lost medical paperwork and irregular access to prevention and treatment services during a conflict or natural disaster can disrupt the “commodity supply chain” for condoms, harm reduction equipment like clean syringes, and antiretroviral therapy (ART) used to treat HIV.

Though the World Health Organization (WHO) has prioritized HIV commodity procurement in emergencies, people living with HIV are still often cut off from service providers.

“How does someone in an emergency situation access ART? The clinic might be destroyed, the staff displaced or distressed. What happens then?” asked Jones.

Henia Dakkak, a senior technical specialist at the UN Population Fund (UNFPA), said that even when ART is available, people still have problems accessing it due to barriers that are present even during non-emergency periods.

As a result, targeted culturally-appropriate services become even more critical for MARPs during emergencies to ensure access and adherence to ART.

Recent research showed that 85 percent of MSM in Kathmandu, Nepal, access condoms principally through drop-in centres that cater for MSM during non-emergency times - knowledge that could be life-saving during an emergency, say activists.

But the trust needed to connect MARPs to HIV services takes time (and is scant in chaotic post-conflict/disaster settings).

“There is a need for well-trained and skilled psychologists and a team of peer educators to gain the confidence of [the] community,” said Badar Munir, who helped establish an IDU testing and counselling programme (with WHO initially and now run with the UN Refugee Agency - UNHCR) for Afghan IDU refugees in Pakistan.

Mass displacement may boost HIV vulnerability and risk due to separation from family members, breakdown of community cohesion, as well as norms regulating social and sexual behaviour, according to the emergency response guidelines, SPHERE Standards.

The Inter-Agency Standing Committee (IASC), which coordinates humanitarian response, has warned that people who experience severe social stigma are at higher risk during emergencies to developing mental health problems, including substance abuse, which can, in turn, increase HIV risk.

“When at-risk populations are displaced due to conflict or disaster, their journey of risk during displacement only gets riskier,” said Dakkak from UNFPA. An urban informal settlement, where the displaced may find themselves, “exacerbates any risk they already experienced”, added Jones from UNAIDS.

According to SPHERE, refugees, migrants, youths and single mothers are also at heightened risk of HIV transmission during emergencies.

“In Syria we see families coping with crisis by forcing young daughters into marriages, which makes them vulnerable to trafficking or other forms of exploitation - and therefore more vulnerable to HIV,” she said.

But the problem is that vulnerability to HIV transmission is hard to quantify, said Rachel Baggaley with WHO’s HIV/AIDS Department. “The logic that risk will increase is there, but information is scant and mostly anecdotal. We need to know more,” she said.

Such research is hard to conduct, according to the London-based Overseas Development Institute (ODI), which has noted: 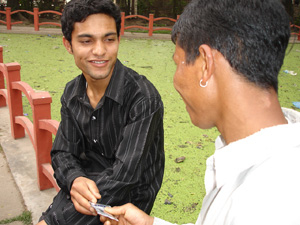 “Obtaining data on the incidence of HIV/AIDS in an emergency may be difficult, as is understanding the context in which HIV infection is occurring when societies are undergoing crisis.”

Screening programmes are in short supply during emergencies, which makes it hard to detect HIV trends, said Dakkak. “Stigma and lack of awareness among displaced populations prevent access to what limited services are available.”

The grim reality, concluded Baggaley (WHO), is the difficulty of gathering any data during emergencies. “Being a marginalized population makes it even more unlikely the information is collected in the first place.”

ODI calls for “a contextual analysis of a humanitarian crisis situation with regard to its HIV needs and implications, instead of the application of a standard set of interventions”.

Judging HIV services targeted at Afghan refugee IDUs in Pakistan a success, UNCHR is expanding the initiative to help other refugees in Pakistan.

“We are not seeing much funding or new funding come in for HIV in emergency settings,” said Dakkak. “Health is often a low funding priority to begin with, then HIV beneath that, and funding for specific at-risk populations even lower than that.”