In Anmar Alhmoud’s hands is a large stack of papers from which can be gleaned the exact cost of the Syrian refugee crisis to Jordan. So far, he says, the country has spent nearly half a billion dollars meeting the needs, both in refugee camps and in Jordanian communities, where Syrians access free education and health care, as well as subsidized food, water and electricity.

The subject of funding gives him goose bumps.

On the other side of the city, outside the Amman office of the UN Refugee Agency (UNHCR), access to the front gate is blocked by hundreds of people lining up to register as refugees. So crowded is the place that small shacks have opened along the side of the street selling cold drinks and snacks to those in the queue.

On 7 June, the UN and its partners launched the largest appeal for humanitarian funding in history: US$4.4 billion to help Syrian refugees and people in need inside of Syria, as well as $830 million to help the Jordanian and Lebanese governments cope with this crisis over the course of 2013. The appeal replaces an earlier appeal for $1.5 billion for aid operations in the first half of the year.

“Every worst case scenario we have had for Syria has been surpassed in the last four months,” said Andrew Harper, head of UNHCR in Jordan, home to more than half a million Syrian refugees, according to government estimates. UNHCR says the number of Syrian refugees across the region - now 1.6 million - could reach 3.5 million by the end of the year.

“No, probably not,” says Edouard Rodier, who coordinates the regional response of the European Commission’s humanitarian aid arm, ECHO. “There will not be enough money.”

“The donors are simply not able to meet the needs,” says Dominique Hyde, head of the UN Children’s Fund (UNICEF) in Jordan. “It’s not a criticism, it’s a reality.”

“Could we do better?”

The Syrian crisis has attracted - in dollar figures - more than almost any other crisis. ECHO, for example, has contributed more than half a billion euros to the Syrian crisis in the last year and a half. “We have never managed to mobilize that much money ever in such a short time frame,” Rodier said.

A Syrian refugee at Za'atari camp in northern Jordan. Half of Za'atari's population is under 18 years of age 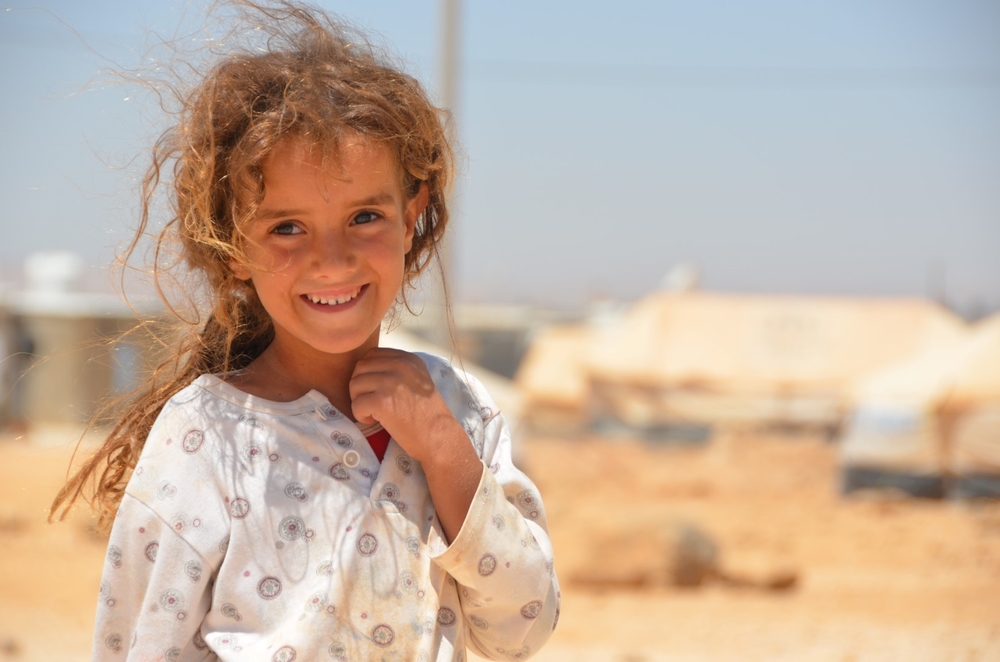 Yet, as a percentage of the needs, the funding remains lower than many other emergencies.

According to the UN’s Financial Tracking Service (FTS), the UN and partners have just 28 percent of the funds they need for operations throughout 2013 inside Syria and in the neighbouring countries sheltering refugees. One donor estimated the appeals would not be more than 40 percent funded by the end of the year.

“It is costing us a huge amount of money at the moment, but we should be spending more than what we currently are,” Harper said. “How can we do it cheaper when we are not doing enough?”

Already, many services have been cancelled or put on hold. In Jordan, UNICEF cannot afford to build a third school for Syrian children in Za’atari refugee camp; UNHCR can only afford cash assistance to one-third of the “extremely destitute” Syrian families who are renting tiny apartments in Jordanian towns and are unsure how they will pay rent next month; and a planned new camp called Azraq will not proceed past the first phase unless there is additional funding.

“Could we do better? Yes,” Harper said. “Could we have done better with the resources we’ve been provided? Probably not.”

While this latest UN-coordinated appeal is the largest in history, it is based on the lowest possible projections, Harper and others said.

“In the end, you can’t run an operation [in Jordan] involving 500,000 people and say it’s not going to cost an enormous amount of money.”

Yet in Western capitals, traditional donors appear to be fatigued.

“This [crisis] can only be solved politically,” said Beat Von Däniken, regional director of the Swiss Agency for Development and Cooperation (SDC), based in Amman. “The perception from traditional donors is that a lot has been done already and that humanitarian funds have been stretched to the maximum.”

Similarly, after a recent announcement of 400 million euros in additional funding from the European Commission, ECHO is unlikely to give any more money to the Syria operation this year, Rodier said.

These financial constraints have left UN agencies looking for other options, including diversified sources of funding. Earlier this year, Kuwait gave $300 million to UN agencies for the Syria response, and several Gulf states have contributed caravans, tents and other items to camps in Jordan and in Turkey. The United Arab Emirates has also built its own camp in Jordan., and Saudi Arabia had plans to do the same in Turkey.

UNICEF is trying to reach out to Coca Cola, with whom it partners in Egypt to connect households to safe drinking water, and to other private companies, Hyde said. But this approach has its own challenges.

“It’s a very difficult emergency to sell to the private sector because it’s seen as political,” she said.

Another approach has been to try to involve development actors in longer-term projects that will benefit the communities hosting refugees, as well as the refugees themselves.

“The needs are increasing and emergency responders cannot pay the bills all the way along,” said one Western donor. “It’s becoming an extremely expensive operation and we cannot deal with it. None of the other donors - and emergency funders all around - will ever be enough for this.”

With this in mind, the World Bank is preparing a $150 million loan - still “a drop in the bucket” according to Haneen Sayed, the Bank’s human development coordinator for Lebanon, Jordan and Syria - to help the Jordanian government pay for basic services like hospital visits and bread subsidies, on which Syrian refugees have placed an increasing burden.

Inside Syria, where the aid operation is working under many constraints, finding more effective ways of working is a challenge. But in refugee contexts, “there are a lot of questions on effectiveness,” Von Däniken said, urging agencies to examine the cost-effectiveness of different operations and share the options with donors.

In Za’atari refugee camp, a sprawling city - now Jordan’s fifth largest - that costs half a million dollars a day to run, according to Harper, there is indeed room for doing things differently.

“It’s not sustainable to continue running Za’atari as a purely humanitarian operation for much longer,” he said. “It is important that we mainstream this… That will open the door to the support of Za'atari, potentially, as part of an overall area development plan should this crisis not end soon.”

A whiteboard in Za'atari camp for Syrian refugees in Jordan lists priority needs to be funded. The UN has appealed for $4.4 billion to help Syrians inside and outside of their country, but is unlikely to get all the money it needs 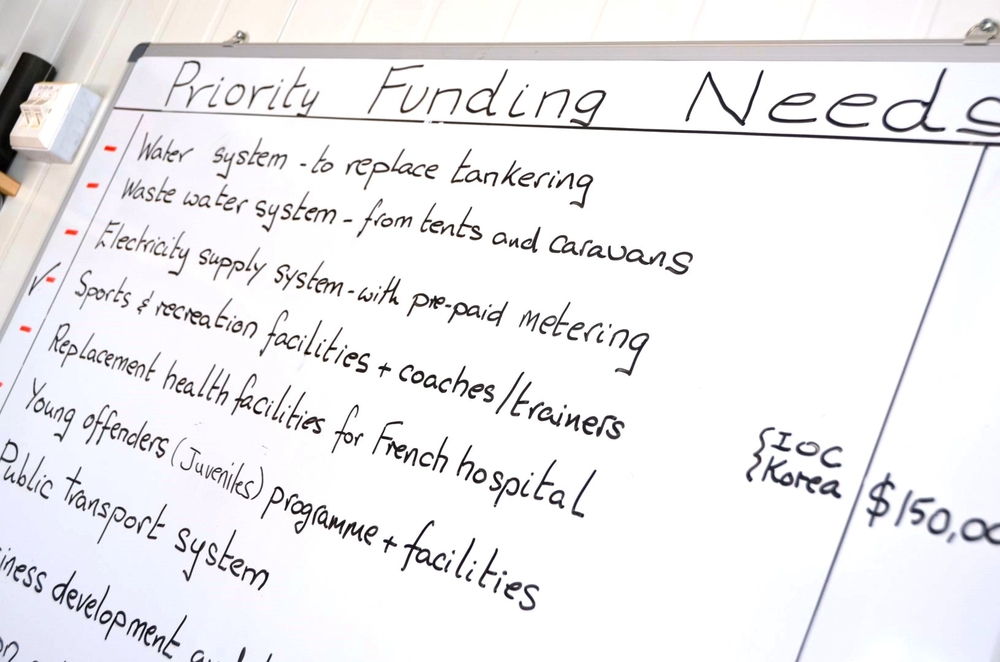 Jordanian ministries are already involved in the administration of the schools, hospitals and infrastructure in the camp, with aid agency support. The idea is that they would eventually start including the management of the de-facto city in their budgeting as well.

“We have saved lives. We have provided basic humanitarian standards. Now it is about sustainability of the services, cost-effectiveness, and to a certain extent also achieving the Millennium Development Goals (MDGs),” Kleinschmidt said.

In an effort to make the operation more cost effective, UNICEF will begin, as of 1 July, directly dealing with the private companies that truck water into Za’atari, instead of contracting them through an NGO.

It also hopes to replace the trucking system, which costs $12,000 a day, with boreholes and a network of pipes. If implemented camp-wide, this would reduce the cost of water provision by 30 percent, according to UNICEF water and sanitation specialist Kitka Goyol.

In one part of the camp, Oxfam has already started using gravity to pipe water from a tank to the bathroom taps at much lower cost.

But at the end of the day, these approaches, aid workers and donors said, will not be enough. Aid workers have already begun a process of prioritization.

"Trying to select among these needs - that are all basic needs - which are the ones that will be left aside is immensely painful. It’s like doing triage. Its’ a horrible exercise."

“Trying to select among these needs - that are all basic needs - which are the ones that will be left aside is immensely painful,” said ECHO’s Rodier. “It’s like doing triage. Its’ a horrible exercise.”

“There are some things that whatever happens, we know will continue,” UNICEF’s Hyde said, referring to life-saving needs: food, water, shelter and health care. Among the “staggering” numbers in the appeal, the latest Regional Response Plan prioritizes protection, new arrivals, emergency preparedness and assistance to urban refugees and their host communities.

But for donors, capacity-building, contingency-planning, some protection activities and even education will fall lower on the list. In Jordan, for example, nearly 150,000 Syrian refugee children are out of school, according to UNICEF.

“A lot of the work we do are not the key priorities,” Hyde said. “What does it mean for the future of those children?”

On a whiteboard in the meeting room at Za’atari camp is a list of “Priority Funding Needs” - to which nappies have just been added. UNICEF had to stop distributing them for lack of funds.

A UNHCR information portal for Syrian refugees now counts down the days in which services will run out without more funding. On 19 June, the counter says, UNHCR’s stock of tents - currently sufficient for 5,000 new refugees a day across the region - will run out (When it runs out of money, UNHCR is forced to borrow, limiting its ability to be prepared for a mass influx).

The Syrian exodus is now the largest refugee crisis the Middle East has seen in modern history, UNHCR’s Harper said.

“So how do we keep going in that sort of situation?” Harper asks. “We can’t afford to fail.”