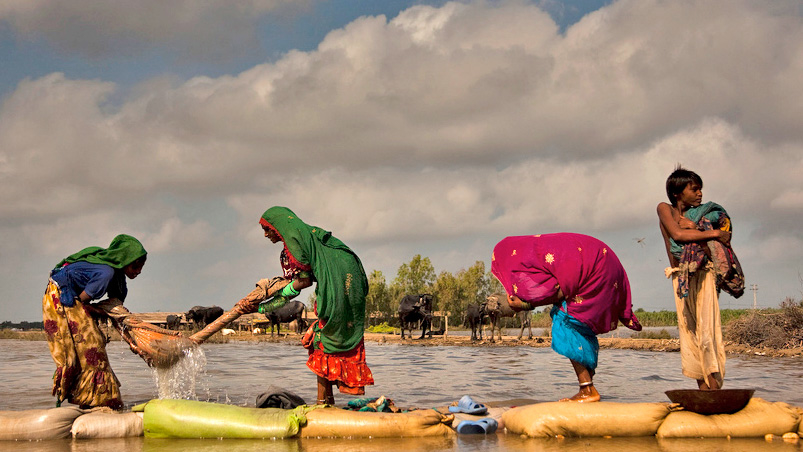 JOHANNESBURG, 4 March 2013 (IRIN) - No one working in the aid community in recent years could have avoided the buzzword “resilience” - but what does the term mean practically, and how has it helped shape action on the ground?

In fact, there is no standard definition of the term, points out a draft paper by the UN Development Programme (UNDP). The UN’s lead development agency, along with the Office for Coordination of Humanitarian Affairs (OCHA), has been tasked with finding ways to consider how development and humanitarian actors can work better together on resilience.

The UN International Strategy for Disaster Reduction defines the term as “the ability of a system, community or society exposed to hazards to resist, absorb, accommodate to and recover from the effects of a hazard in a timely and efficient manner.” The Intergovernmental Panel on Climate Change, meanwhile, describes resilience as “the amount of change a system can undergo without changing state”. The UK Department for International Development defines it as “the ability of countries, communities and households to manage change, by maintaining or transforming living standards in the face of shocks or stresses… without compromising their long-term prospects.”

But according to UNDP, these and other definitions focus too narrowly on responding to shocks rather than preventing or preparing for them, and their stated goal is only to return beleaguered communities to their original state. UNDP therefore proposes to define resilience as a “transformative process of strengthening the capacity of people, communities and countries to anticipate, manage, recover and transform from shocks” - otherwise known as build back better.

Resilience “is more of a process than an outcome,” said Samuel Doe, UNDP’s focal point on resilience, adding that he is bewildered when he hears about organizations planning to “roll out resilience.”

"Resilience is more of a process than an outcome"

Any community targeted by a programme with a resilience component is meant to end up with improved self-esteem, gender sensitivity, the ability to organize themselves, an effective early warning system, and other forms of self-sufficiency, he says.

In the field, activities that improve the “resilience” of vulnerable households and communities - such as disaster risk reduction, livelihood support, social protection and basic services - are not new, explained Sarah Muscroft of OCHA.

“What is new is the way in which needs are assessed and programmes are planned and delivered. Bringing together humanitarian and development actors and aligning assessment and planning tools will be central to this approach,” she added.

Resilience can potentially act as a bridge between emergency response and long-term development aid, tackling the vulnerabilities that make people susceptible to shocks. But there remains confusion over who should be more responsible - humanitarian workers providing immediate relief in a crisis or longer-term development actors.

Simon Levine, a researcher with the Overseas Development Institute (ODI), said, “From what I see in discussions and workshops, there is more interest in ‘resilience’ from among the humanitarians, and there is a tendency to see resilience as something that humanitarian aid should be building in its response - ‘building back better’ - to prevent crises recurring.”

He added, “I strongly believe that this puts the accent in the wrong place… the real driver behind the resilience agenda ought to be the realization that the job of ‘development aid’ is to prevent people falling into crisis.”

But humanitarians argue they are already working beyond their mandate of providing relief. Recurrent crises - such as cyclones in the Indian Ocean, droughts in the Sahel and the Horn of Africa, and floods in Southern Africa - have already led to much introspection about whether humanitarian aid provides only a band-aid for systemic problems.

Inspired by vulnerability studies in the mid-1970s, humanitarian officials have increasingly turned their attention to longer-term solutions. This led to the creation of the disaster risk reduction (DRR) approach. The Hyogo Framework for Action - the first internationally accepted framework on DRR, adopted in 2005, was “a first comprehensive attempt to detail what are the ingredients of resilience,” said Margareta Wahlström, UN Special Representative of the Secretary-General for Disaster Risk Reduction.

Today, humanitarian aid is more than just drilling a borehole to provide water in a drought, explains Dorothée Klaus, the UN Children Fund’s (UNICEF) Horn of Africa chief of programme and planning. While doing that, an aid agency considers the needs of livestock and environmental erosion, and it tries to ensure households understand the reason for the intervention and take ownership of the project - factors that a development project would take into account.

OCHA’s Muscroft says humanitarians’ embrace of resilience “will necessitate a shift from the traditional relief-to-development paradigm to embrace a much more integrated approach that is able to simultaneously address short-, medium- and long-term needs”.

That is precisely what Luca Alinovi, the UN Food and Agriculture Organization (FAO) representative for Somalia has been calling for. He says classifying aid as “relief”, “early recovery” or “development” does little to help countries like Somalia that are facing what is known in aid jargon as a “protracted crisis”.

But how aid is classified affects how it is funded; money may be made available for only an immediate intervention, or it may be supplied on an annual basis.

“If we want to help the country emerge from the crisis, we have to make a long-term commitment,” Alinovi told IRIN in 2011, ahead of the famine in Somalia, which many experts blamed on inadequate funding for long-term projects that would have boosted Somalis’ resilience to climatic shocks.

Both humanitarian and development “streams have to converge around resilience outcomes,” he said in an email.

Lynn Brown, the World Food Programme's chief economist, says the problem is “trying to do emergency work in a way that seamlessly transitions to development as the immediate emergency dissipates.”

Humanitarians can help build resilience by providing useful analysis to development actors, says Jackob Rhyner, director of the Institute for Environment and Human Security at the UN University in Bonn.

But do development actors listen to humanitarian workers? This would involve a considerable shift in thinking, particularly for big donors involved in development work like the World Bank, which use different standards for evidence, says ODI’s Levine.

Even so, donors such as the EU have called for a common planning process for both development and humanitarian aid, he points out.

As each agency, organization and donor tries to draw up frameworks around resilience, it will help them arrive at a common understanding, says UNDP's Doe.

There have been previous attempts to build bridges between humanitarian and development aid, including the “early recovery” approach, which was meant to help humanitarian programmes “catalyse sustainable development opportunities.”

"You can’t add up a score which says how resilient a child is to an endemic disease (for which immunization helps, but only depending on where they live, what other health threats they face, etc"

But “despite efforts, early recovery typically has been seen as separate rather than integral to humanitarian action,” said Muscroft.

Doe hopes the resilience agenda will prompt greater emphasis on early recovery. Asked whether the resilience approach is meant to avoid the linear relief-recovery-development route, he responded that as discussions continue on the issue, the way forward will emerge.

Muscroft says the “biggest challenges” to implementing a resilience approach will be “overcoming entrenched institutional sovereignty” and getting agencies to become more flexible and to adapt, think and act differently.

Most donors, meanwhile, would like to know if their money is actually making people more resilient.

UNICEF's Eugenie Reidy, who works in Somalia, says statistical measures such as immunization coverage, nutrition indicators and access to water could help build a picture of resilience. But there are indicators of resilience that are impossible to quantify, like confidence, capacity to adapt and empowerment.

UNICEF has been consulting with a community in south central Somalia that had been affected by the 2011 famine to better understand what resilience means from the community’s perspective. They want to see if a mix of quantitative and qualitative data will help them assess the effectiveness of their resilience programming.

Levine says “mixed method approaches are the way to go... My only disagreement here … is having a composite measurement of this ethereal essence.

“You can’t add up a score which says how resilient a child is to an endemic disease (for which immunization helps, but only depending on where they live, what other health threats they face, etc.)… [or] how resilient their son may be to a downturn in the job market in 10 years’ time.”