Donors channelling funds towards Syrian refugees in Lebanon must also assist their poor Lebanese hosts to diffuse rising tensions, aid workers and a government official said ahead of an international pledging conference for humanitarian aid to Syria and its neighbours.

“We have seen a growing sense of resentment among the Lebanese host communities that see assistance going to refugees and not to them,” Robert Watkins, humanitarian coordinator in Lebanon, told IRIN. “It is causing some tensions.”

Most of the more than 220,000 Syrian refugees who fled to Lebanon have settled in the poorest parts of the country, in districts like Akkar in the north and Ba’albek or Hermel in the eastern Beka’a Valley.

The North Governorate is home to 20 percent of Lebanon’s population but 40 percent of its poor, with more than half the people living under US$4 a day, according to a 2005 study.

Despite their poverty, people of the north have been undeniably welcoming to refugees, taking them into their homes for months and covering their food, water and electricity needs, aid workers said.

Nearly two years later, more than 60 percent of the refugees are now renting their own homes. But their presence - in some 550 villages across the country - has depleted government-provided supplies in pharmacies, increased competition for jobs, raised the price of housing, and, in some cases, more than doubled the population of the town or village.

“We are reaching the point of suffocation for Lebanon,” said Hala El Helou, emergency coordinator at the Lebanese Ministry of Social Affairs, which is responsible for helping the refugees.

“There have been many reports by the security forces of an increased number of security incidents that include Syrians,” both as aggressors and as victims, she told IRIN, pointing to killings, beatings and thefts. Reports of forced prostitution, early marriage and child begging have also increased, she said. “It’s a reflection of the social and economic situation.”

One of the early incidents was the October launching of a Molotov cocktail into a municipal building hosting refugee families in a village in Akka’rs Wadi Khaled area. No one was injured.

“It was simply a sign of the changing winds of opinion whereby the period of unrestricted hospitality and generosity was beginning to change,” said one aid worker who preferred anonymity.

In a more recent incident this month, explosives blew off the roof of a house sheltering refugee families near the town of Aidamoun, also in Akkar.

"There are tensions, and those tensions will only get worse" – Robert Watkins, humanitarian coordinator

Sahar Atrache, an analyst with the International Crisis Group in Lebanon, said Syrians are now taking an unfair share of the blame for all the ills in society: “Whenever you have a robbery, a rape, it’s because of the Syrians, as if Lebanese don’t do these things.”

“The initial reaction of the Lebanese community was different,” explained Dana Sleiman, spokesperson of the UN Refugee Agency (UNHCR) in Lebanon. “They were even picking up Syrians from the border. But 20 months have passed since then.”

This tension has also had implications for aid workers.

One Western researcher said locals near Qobayat Village in Akkar initially “welcomed” aid workers there with stones, a sign of the indignation at the aid delivered only to Syrians in a region historically neglected by the Lebanese government.

Some locals have also tried to exploit the situation to their advantage.

“Some Lebanese landlords attracted Syrians into their houses to have them [the houses] rehabilitated,” said Mads Almass, country director for the Norwegian Refugee Council, which gives landlords funding to make their homes more fit to shelter refugees. “When they got told that their houses didn’t meet our criteria, we received threats to expose us to the media.”

Watkins said the aid community has seen this shift in the feeling of host communities and tried to design programmes accordingly, focusing on improving the overall conditions and services in these areas to benefit both refugees and their hosts. These include programmes that would buy drugs to replenish pharmacies, inject cash into the economy by offering cash-for-work projects for Lebanese people, and provide credit to help small businesses start up.

“But these [kinds of programmes] are, unfortunately, very difficult to find donors attracted to,” Watkins said.

“Conceptually, [donors] understand how important that is,” he continued, “but if they are told they have a limited amount of resources and they will choose between injecting cash into the Lebanese economy to help the Lebanese population or injecting cash into a relief operation which is providing food and shelter to refugees who are bereft of both, they generally opt for the latter.

“But there are tensions, and those tensions will only get worse.”

A Syrian woman sheltering in newly constructed cement block shelters near a partially constructed mosque in the town of Aarsal, Lebanon. (Nov 2012) 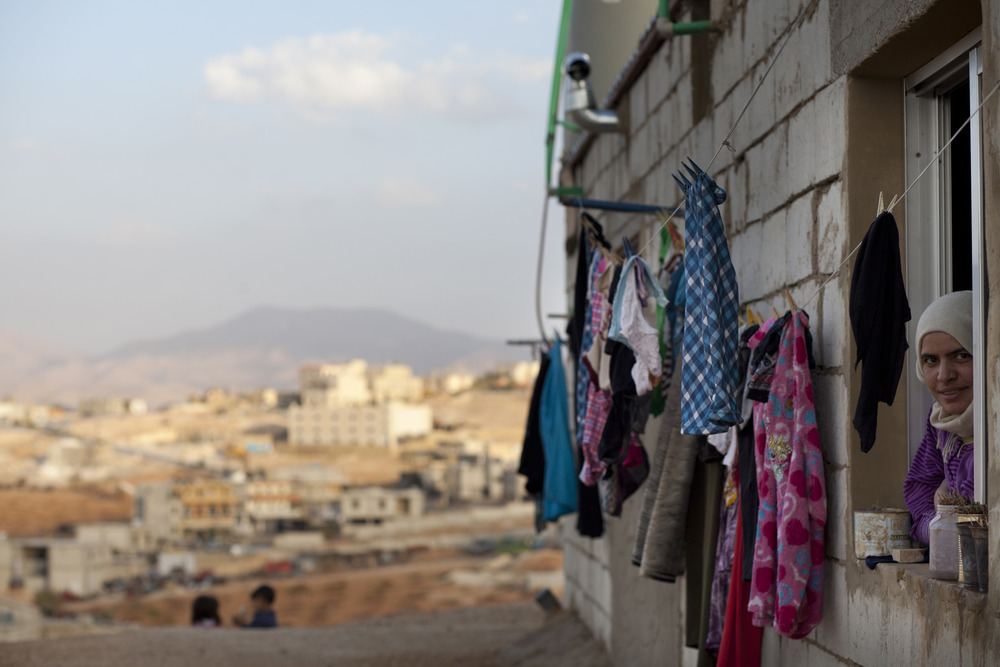 An international conference to take place on 30 January in Kuwait aims to garner funding for aid projects inside Syria and in neighbouring countries hosting nearly 700,000 registered refugees. The appeals amount to more than $1.5 billion, but donors have given less than $50 million since they were launched in December.

UNHCR has implemented so-called quick-impact projects - such as equipping mosque halls, opening a public library, and supporting agricultural co-operatives - after holding sessions with Lebanese communities at which residents expressed their village’s needs as they saw them.

The UN Development Programme (UNDP) has also done similar projects in Wadi Khaled and in the Beka’a Valley’s Arsal town, both home to many refugees. Country Director Luca Renda said he hopes to expand these kinds of programmes across the country and is in contact with many donors on this issue: “We hope the Kuwait meeting will yield results,” he told IRIN.

The Regional Response Plan, spearheaded by UNHCR, includes projects supporting host communities, as does the Lebanese government’s separate appeal for $180 million, which was launched in December and is currently being revised in line with the constantly growing refugee numbers.

Observers say the government’s capacity to deal with the mounting refugee crisis is limited, given the economic problems the country is facing and its polarized politics. Lebanon is the only neighbouring country in which refugees are not housed in camps, but rather are living in towns and cities with the support of local people.

The Minister of Social Affairs, Wael Aboufaour, recently told the Lebanese newspaper The Daily Star that camps may soon be the only solution.

One quarter of population

El Helou said there were 811,000 Syrians in Lebanon - including refugees, migrants and visitors. Added to a Palestinian refugee population of at least 450,000, the foreign “guests” are equivalent to a quarter of the Lebanese population. The UN expects the number of Syrian refugees in Lebanon, already equivalent to five percent of the population, to increase to at least 300,000 by June.

At all levels, observers say, the government has become consumed by the Syrian crisis and its impact on Lebanese soil.

As a result of upheaval in the region, the Lebanese government has downgraded economic growth estimates for 2013 from 4 percent to 1.5 to 2 percent, Samir El-Daher, adviser to the prime minister on economic affairs and development, told IRIN. The crisis has hit Lebanon’s exports through Syria, border trade with Syria and tourism industry.

Aid agencies have already tried to tailor their programmes accordingly. Instead of distributing food, for example, the World Food Programme (WFP) gives refugees vouchers to redeem food at local shops with which it has signed contracts. Instead of creating jobs for Syrians specifically, UNHCR is trying to regularize the status of those refugees who entered illegally to make it easier for them to move around freely and access the common job market. The UN Children’s Fund (UNICEF) is rehabilitating schools in which both Syrian and Lebanese students study in an effort to ensure that its emergency work for Syrian refugees feeds into long-term development of the region.