The Syrian crisis has disrupted food imports and exports in the region, raising food prices in Jordan, Iraq and Turkey, but governments have so far been able to contain the impact on consumers by finding new trade routes and absorbing some of the increased cost, according to food vendors, truck drivers and analysts.

Arab countries import at least half of the food they consume, according to the World Bank, with trade moving from agricultural breadbaskets such as Turkey, Lebanon and Syria to more arid countries such as Jordan, Iraq and the Gulf countries.

Before the crisis, Syrian farmers were suppliers of vegetables, fruit and other food products – exporting nearly 2 million tons of vegetable products and 212,000 tons of animal products in 2010, according to the Syrian Central Bureau of Statistics. Up to one fifth of that went to Turkey and Iraq alone, according to Ayesha Sabavala, a Syria analyst with the Economist Intelligence Unit.

But as the conflict drags on, exports are slowing, with violence reducing agricultural production, shutting down businesses, and disrupting trade routes.

“The fighting has prevented food supplies from crossing into other countries,” Sabavala told IRIN. “A lot of the transportation infrastructure has been hit quite badly. Even though there are some regions that are continuing to produce things like bread, transporting them to the rest of the country is proving to be a challenge.”

Syria is also a thoroughfare for many trade routes in the region, now hampered by insecure border crossings, sometimes the scene of clashes between government and opposition forces.

More than 300,000 Syrians who have flooded into neighbouring countries have also increased the demand for food in local markets.

At one of the main food markets in the Iraqi capital Baghdad, 51-year-old Muhammad al-Noaimy is selling potatoes and onions at twice their usual price.

“The situation in Syria has reduced business between both countries. The expenses of trucks that bring in the food have increased because of the bad security. The border is a problem,” he told IRIN.

Before the Syrian conflict, Iraq used to receive one third of Syria’s exports; bilateral trade between the two countries topped US$4 billion in 2010.

But Al-Qa’im border crossing, one of the major supply routes across the Middle East, has been closed to commercial traffic for more than a year, and in the past few months, the other two crossings - Al-Waleed southward and Rabi’a up north - have been closed repeatedly, making the arrival of Syrian merchandise unpredictable.

Food prices in Iraq increased by 1.2 percent between August and September 2012, an increase of 7.8 percent over the year, according to the Iraqi Central Organization for Statistics. It noted a particular increase in the cost of yoghurt, cheese, eggs and fruit.

“The crisis in Syria is the main reason for the increase in the price of fruit and vegetables in Iraq,” said Jabar Obaid, a member of the Iraqi parliament’s agricultural committee.

Sultan Shehab has been driving the Syria-Iraq route for seven years with his truck.

“It is not an easy job but it’s also good money. After what started in my country and the violence, my job became risky.”

He said drivers have had to adapt their route - sometimes taking longer, harder routes through Iraq or Jordan, or having to wait in Iraq for days until the border re-opens - “it all depends on how the security situation is on that day.”

Iraq is increasingly turning to Turkey, Iran and Jordan for food imports, and securing wheat and rice from a more diversified set of countries.

So far, prices of staple items have been mostly stable in the region because of subsidies by governments, said Abeer Etefa, senior public information officer for the Near East at the UN World Food Programme (WFP).

“What people pay for the food may not increase, but it is eating into government budgets,” warned Monika Tothova, an economist at the Food and Agriculture Organization (FAO).

Although most fruit and vegetables are still available in the Jordanian capital Amman, shopkeepers complain that vegetable imports from Syria have dropped, leading prices to soar.

"Prices normally go up in summer, especially with Ramadan and expatriates returning to Jordan, but never like this,” Abu Ali, a fruit seller in east Amman, told IRIN in September. “I used to buy a box of cauliflower for three Jordanian dinars, but this summer it has gone up as high as 14. This is insane!”

According to a report by the Jordanian Department of Statistics, the price of vegetables rose by 32.1 percent between July 2011 and July 2012.

The government has blamed the surge in demand on the arrival of - by its count - 200,000 Syrian refugees (only 105,000 are registered or awaiting registration with the UN Refugee Agency as of early October), heavily increasing the demand for food.

"I have so many customers walking into my shop. I would say it is a 20 percent increase with so many Syrians living here now,” said Khaled Ahmad, a shopkeeper in Mafraq, a border town now home tens of thousands of Syrians.

“The refugees put a lot of pressure on the regional system,” Tothova, the FAO economist, told IRIN.

But analysts warn it is difficult to isolate the Syrian crisis as the cause of the rising prices, which could also be linked to rising food prices globally. The shortages are also linked to a poor vegetable harvest in Jordan this year, owing to an especially hot and dry summer. Jordan’s limited production has also increasingly been exported to Iraq and the Gulf, to help fill the gap left by decreasing Syrian exports, according to Ahmad Murad, a vegetable seller in west Amman.

Turkey: higher prices along the border

Turkey closed its Syrian border to commercial traffic in July.

A doner stand in the Turkish economic capital, Istanbul 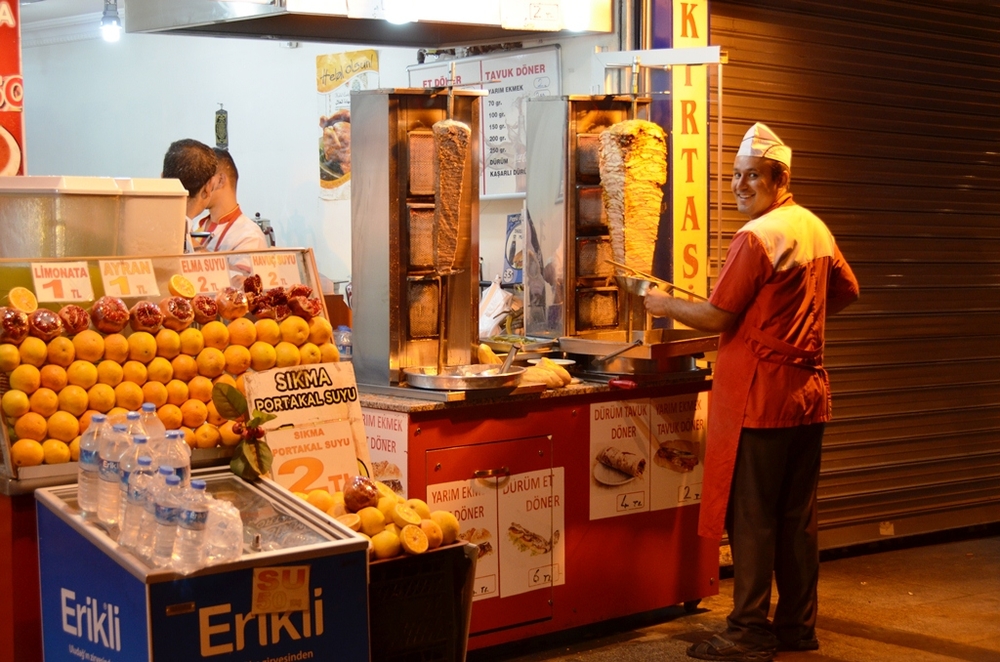 Nationally, food prices in Turkey have remained stable, but in the border regions, some food normally imported from Syria has quadrupled in price, according to Veysel Ayhan, a professor at Abant Izzet Baysal University, whose think-tank, the International Middle East Peace Research Center (IMPR), has just published a report on the economic impact of the Syrian crisis in the border region.

One kilogram of meat, for example, has risen from five Turkish lira ($2.77) before the crisis to 20 now, in the southern Turkish province of Hatay, Ayhan told IRIN. Tea, sugar and olive oil are also far more expensive.

Turkish sanctions on Syrian oil have also had an impact, he said. Oil needed for tractors and water pumps has become unaffordable for many farmers, who have had to reduce their wheat production. As a result, family incomes have dropped.

Exports of lemons, apples and other products from Hatay to Syria have also dropped by 75 percent, IMEPR found. Neighbouring Gaziantep province’s $120 million trade with Syria “is finished”, Ayhan added.

In Hatay, the impact has been much more severe.

“People have started selling their houses, their cars,” Ayhan told IRIN. “Within six or seven months, the situation in the Antakya area [Hatay Province] will be very difficult. Many will migrate to Mersin and other parts of Turkey to try to earn a living.”

As tensions between Turkey and Syria rise, analysts warn that this could lead to more price shocks.

The vast majority of Lebanon's agricultural exports are normally routed through Syria by land to the Arab region, with Iraq receiving items like apples and onions, according to vendors there.

At the Masna’a crossing between Lebanon and Syria, Turkish and Lebanese trucks can be seen lining up at the checkpoint as usual. A 15-year veteran driver who declined to give his name said there were no problems on his Damascus-Beirut route, except for delays at Syrian customs.

The route is still functional and has even seen its traffic increase thanks to the opening of a new ferry line between Tripoli in Lebanon and Mersin in Turkey (near northern Syria), meant to reroute traffic outside of some of Syria’s more dangerous areas.

Still, Lebanese media have reported trucks being seized, looted, or shot at; as well as protests by agricultural exporters about insecurity on the routes. Many insurance companies have reportedly ceased cover for convoys passing through Syria, while those that still provide insurance have raised their fees substantially.

Several closures of the main border crossings between Syria and Lebanon, as well as gunfire and looting, have affected exports.

Lebanese exports have dropped, from $2.2 billion in the second quarter of 2011 to $1.78 billion over the same period this year, according to the Lebanese Customs Department.

But until now, the impact has been limited: “For the moment at least, I am not seriously concerned about the livelihoods of Lebanese farmers,” Solange Matta-Saddé, FAO assistant representative in Lebanon, told IRIN.

The Lebanese government is setting up a new maritime route for farmers to ship their produce by ferry from Beirut to Jordan or Egypt, in order to bypass Syria.