The house where Bertrand Dodoffo was born and raised is now a pile of rubble and brick. But, if you look closely, you can still see a white plastic rosary and a metal crucifix hanging off a nail on what was the wall of Bertrand's bedroom. 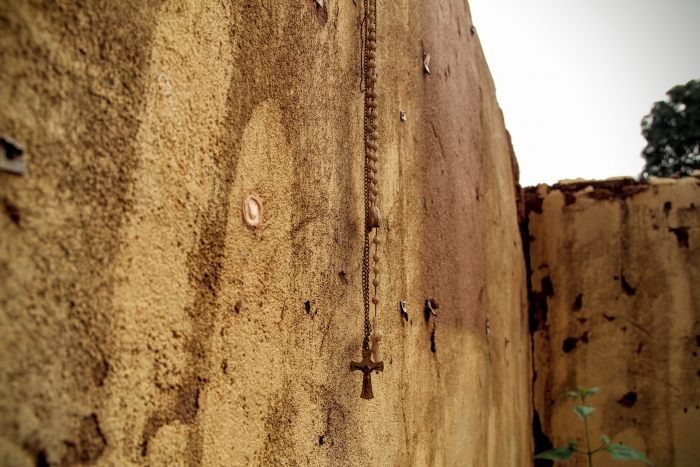 Since he was a little boy, Bertrand, now 41, had wanted to be a priest. He was training at a Catholic seminary in the capital, Bangui, and living in his parents' compound to save money.

He had managed to keep going with his studies when conflict broke out in Central African Republic in 2009. In December 2013, when fresh violence erupted in Bangui, he had been close to finishing.

His daily lessons weren't far from home. The biggest local church, Notre Dame de Fatima, is next to his family's compound. A wall, about three metres high, is the only thing that separates the church grounds from Bertrand's place.

On 9 December 2013, scaling that wall was Bertrand's only means of escape as violence tore through his neighbourhood.

For nearly three years now, the Fatima church has been Bertrand's home. During the peak of the violence between the Séléka – a coalition of mostly Muslim insurgent groups from the north of the country – and local vigilante groups known as the anti-Balaka, religious sites across the country became improvised boltholes for people fleeing the indiscriminate killings, rapes, and looting.

See: Hear it from the people: What's wrong in the Central African Republic?

Camp organiser Innocent Gbawito told IRIN that when people first started coming, around 6,000 men, women, and children were crammed into the church grounds. "You couldn't drive a car into the gate," he recalled. "The yard was crammed with people."

According to the UN’s emergency aid coordination body, OCHA, more than 800,000 Central Africans have still not returned home. Around half that number live outside CAR in neighbouring countries. The rest are in camps for internally displaced persons, or in the homes of family and friends.

Bertrand wants to leave the church but, with no home to go to, he’s going to need help. “If the government, along with NGOs, can do something to rebuild their homes then people will be able to leave,” he told IRIN. “But if that doesn’t happen, well, you can see, that’s why people stay in camps.”

The government, along with partners like the UN’s refugee agency, UNHCR, is working to try and re-house the displaced. UNHCR said that as of 6 August, it had helped nearly 900 people from six camps across the capital to return home.

But that's just a drop in the ocean, with OCHA estimating there are more than 400,000 IDPs still waiting to return. 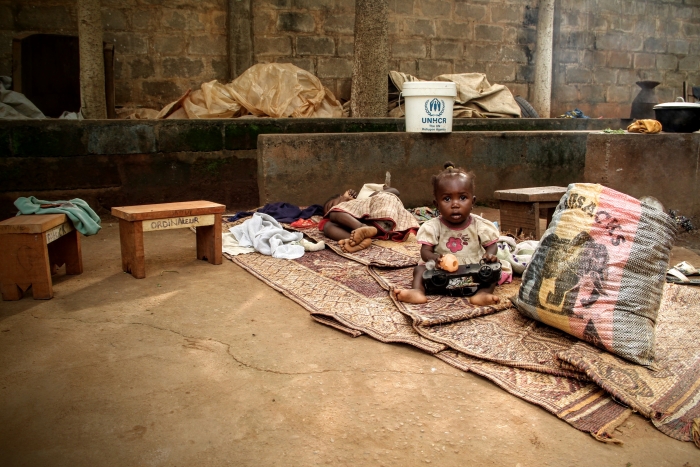 For now, government re-homing targets seem overly optimistic. "The good intentions are there," noted an official at the largest IDP camp in the capital. "But the means aren't there."

The EU's Bêkou Fund has pledged more than 11 million euros for urban rehabilitation to help rebuild homes in destroyed communities. But the government is still looking for more money, as are international relief agencies for a range of humanitarian projects. UNICEF says its education projects have so far only been 20 percent funded.

The lack of money is slowing down efforts. Minister of Social Affairs and Reintegration Virginie Mbaikoua told IRIN the government aims to have the majority of IDPs in Bangui home by the end of September.

"But that date might change," she admitted. "We are asking donors to help us so that these people can go home."

It's a Wednesday morning in central Bangui, and 38-year old Wilfred Makosso is beginning his journey back home, to the PK12 district of the capital.

Makosso fled his neighbourhood in December 2013. He sought refuge in the compound of a church, Saint Charles Lwanga, with around 200 other people. With the support of UNHCR, the church camp has now been closed. At a small ceremony, each household gets a sack containing some essentials: sleeping mats, plastic sheets, jerry cans, a bucket, blankets, and kitchen pots and pans.

"Security is coming back, little by little, to our neighbourhood," said Makosso. "Life in the church camp was terrible. So we decided it was better to leave.”  He’s planning to live with his parents for the timebeing. “At home, we can do better,” he said. “People can go farm, go to the market and trade.” 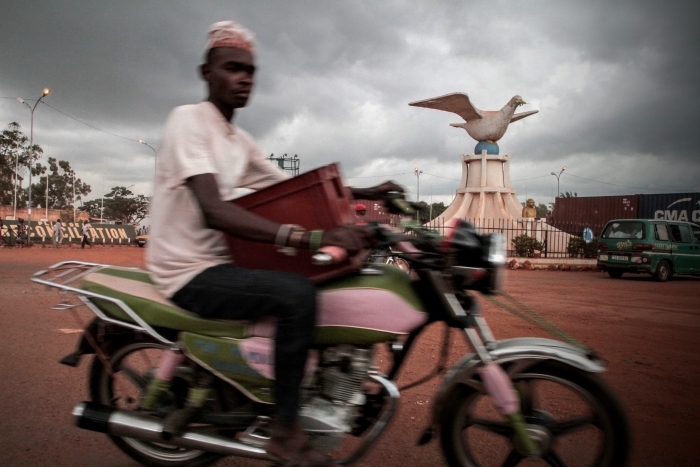 The government and relief agencies admit that people won't go home until they feel safe. In June 2016, deadly attacks by militia groups in the northwestern province of Ngaoundaye forced thousands more from their homes and into neighbouring Chad.

In a review of his first 100 days in office, CAR President Faustin-Archange Touadéra said the country remained “in danger”, with rebel groups still in control of many regions outside the capital.

It's been more than a year since armed groups signed a peace and disarmament agreement at the Forum de Bangui. But the government-led official disarmament, demobilisation, and reconciliation process has still not started.

See: BRIEFING: Can new pact bring peace to the CAR?

In the interim, the UN mission in the CAR, MINUSCA, has piloted what it's called pre-DDR. In return for handing in their weapons, ex-combatants are eligible for paid community service. The UN has committed around $6 million to the project and says more than 3,000 people have signed on.

But the UN stresses that pre-DDR is only a temporary measure. "Full DDR is the responsibility of the government," said MINUSCA spokesman Vladimir Monteiro.

In an interview with local media on 1 August 2016, Touadéra said he wanted to start formal DDR discussions with armed groups by the end of August. But full funding for that DDR process is yet to be secured. The regional community, CEMAC, has pledged around 6 million euros but more money is needed. A further European donor meeting is scheduled for November in Brussels. 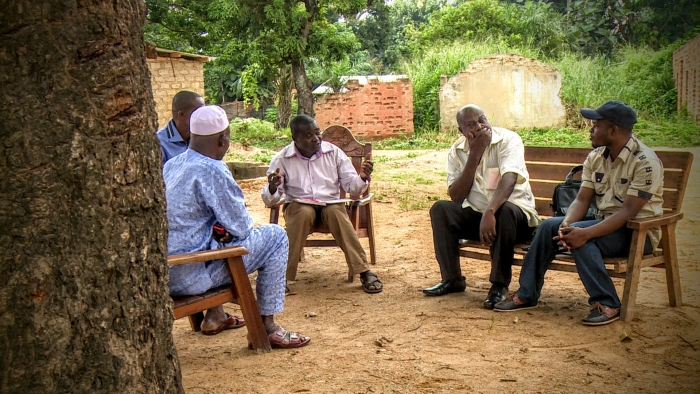 However, some communities are tired of waiting for the official DDR process to begin. In an area of the capital called Ngaragba, a cilivian-led “peace cell” is building bridges in the community and getting former fighters to give up their arms.

The peace cell is made up of community leaders from all faiths, backgrounds, and sexes. Supported by NGO Conciliation Resources, it aims to promote community cohesion through dialogue.

Godefroy Kassai is the group’s secretary. "We've worked a lot with children in the neighbourhood, trying to sensitise them," Kassai told IRIN. "One day we heard a little boy say he wanted to kill any Muslims that came back. So we realised we had to start with the kids."

Around 300 Muslim residents fled this area during the peak of the conflict. The majority had been living peacefully in the area but still their homes were destroyed, their lives threatened. Some have now returned, including local Imam Idriss Koyakomzio.

Today, he is part of the peace cell leadership. Koyakomzio’s mosque was destroyed during the fighting. It was rebuilt last year, thanks to donations from local churches coordinated by the peace cell.

But Ngaragba isn't totally free from weapons nor a potential return to violence. Hérve Yombo led the anti-Balaka group in the neighbourhood.

Yombo is 41 and was working in a quarry outside the capital when he heard his hometown was being attacked. “I had to get a self-defence group together. And together we pushed the Séléka out of our neighbourhood,” he told IRIN.

Yombo says he surrendered his gun to the local mayor's office as soon as he felt his neighbourhood was secure. He's also now part of the community peace cell.

"There are people who committed crimes who are scared to come back or hand in their weapons because of what they’ve done."

"There are people who committed crimes who are scared to come back or hand in their weapons because of what they’ve done," Yombo told IRIN. "But some of them are holding on for the DDR."

Yombo said people are expecting around one million Central African francs each, the equivalent of nearly $2,000, if they give up their weapons. However, no official sum has been revealed.

It's late afternoon and Bertrand is back at the Fatima church camp, catching up with a few fellow residents.

He's been out in the town centre all day, looking for work.

"I’m trying to find something in a school," he explained. "I did some of my training in Kenya and I speak some English, so maybe I can teach that."

Bertrand had wanted to travel again but his passport was destroyed along with his home.

“All I had is gone, but what can I do?” he asked. “I just have to stay optimistic. And hope someone can help."