Italy’s migrant reception system is buckling under the pressure of record arrivals and ill-thought-out reforms that are leaving asylum seekers with no access to state healthcare and choking those trying to help with red tape, an IRIN investigation reveals.

Irregular migration by sea from Libya to Italy has been overwhelming state institutions and personnel even before peak arrivals begin mid-summer. So far this year, Italy has received 19 percent more people than during the same period in 2016, itself a record-breaking year. In response, Italian officials are working to radically restructure the nation’s migrant reception system.

The reforms have been spearheaded by the Minniti immigration decree, passed in April and named after Interior Minister Marco Minniti. The law aims to overhaul an asylum system long mired by backlogs of applications and appeals, largely by expediting court proceedings and deportations of those denied asylum.

Key provisions include the creation of 16 new repatriation centres, the first of which is expected to open in August, adding to the nation’s existing four. The decree will also abolish secondary appeals on asylum rulings. In the past, asylum seekers were able to repeatedly appeal negative decisions on their claims, with individual court hearings taking years to process through Italy’s slow-motion bureaucracy.

The Minniti decree is an attempt to reduce paperwork in state offices and close loopholes long exploited by irregular migrants wanting to remain in the country. But aid workers say the changes have opened up new gaps in the system, which they say remains poorly monitored and continues to underserve people with legitimate asylum claims.

Most notably, the new system leaves migrants without access to state health services until they are issued identification documents containing ID numbers, usually four to six months after arriving. As recently as February, migrants could access free public facilities for emergency healthcare. Now, the medical costs of those without an ID number must be covered by the privately contracted reception centres hosting them.

How is it (not) working?

In most cases, the Italian government leases under-utilised properties such as shuttered hotels or unoccupied apartments to house migrants. The owners then hire staff or work themselves, receiving 35 euros a day per adult and 45 euros a day for each minor they accommodate. That money must now also cover private medical fees. 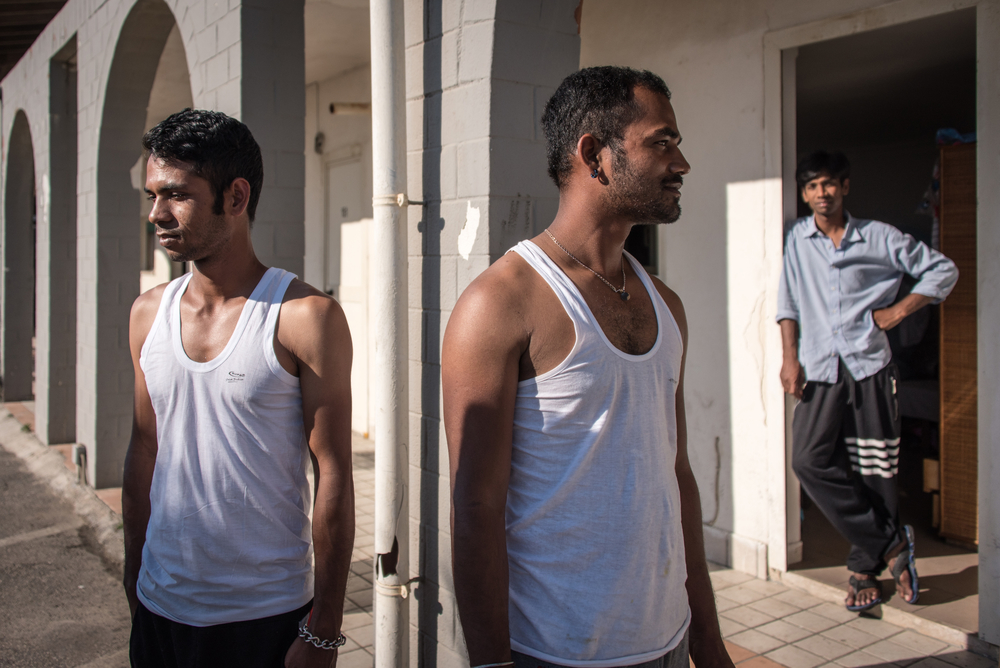 Flavia Calò, a psychotherapist with Doctors for Human Rights (MEDU) who treats torture victims, said cases of newly arrived mothers giving birth at the expense of cash-strapped centres have already been recorded.

For the many migrants exposed to physical, sexual, or mental abuse during their journeys through Libya, a prolonged period without healthcare can be disastrous.

“Just last week, we received one patient who had five teeth extracted by force in Libya,” Calò told IRIN. “This person is in need of serious, long-term medical attention… and is one example of the many migrants who carry scars from the places they have been before coming to Italy.”

Upon arrival, migrants receive a basic health check up at the “hotspots” where they are fingerprinted and given information about filing asylum claims. At these initial landing sites, scabies treatment and emergency healthcare is administered before individuals are transferred to reception centres, usually within a few days. Conditions not treated in hotspots then become the responsibility of the reception centre operators.

In one centre in southern Sicily, social workers speaking on condition of anonymity told IRIN they became aware of the new healthcare gap only after one of their residents was denied treatment in March. Asked how they were treating sick residents without access to the state system, one social worker pointed at a first aid box on her desk and said, “this is our health care system now.”

As the social workers spoke, they handed bandages and antiseptic pads to a resident with chemical burns on his feet and buttocks. They said he had open wounds, several layers of skin deep, and that many new migrants arrived with such burns after sitting for prolonged periods in boats filled with a mixture of salt water, motor oil, and gasoline.

Even when migrants are finally issued with ID documents, they face the possibility of another interruption in access to public healthcare when those documents expire after six months and must be renewed.

Tied up in red tape

Social workers said the system creates excessive paperwork for centre employees, who are responsible for handling renewals as well as managing individual asylum applications. In the first five months of the year, 61,800 asylum claims were filed in Italy, compared to about 40,000 during the same period in 2016, according to data from the UN’s refugee agency, UNHCR.

“They are completely dependent on us to handle their documents,” one employee told IRIN. “I’m a social worker. I’m supposed to take care of their personal issues, make social connections, get to know them… but I barely get to do any of that because I’m always trying to keep up with their cases, always trying to keep up with the treadmill of paperwork.”

To further complicate matters, operating standards and administrative requirements differ from one Italian province to another, meaning the reception system is anything but uniform. While one district may require centres to provide Italian language classes and work-study programmes, others do not. Quality standards are set by municipal governments, and social workers told IRIN they depend on how involved local authorities want to get in an issue that’s not always popular at the ballot box.

State evaluations of reception centres tend to be limited to structural integrity and a checklist of basic items, such as whether they have an adequate number of beds and working bathrooms, said Lucia Borghi, who monitors eastern Sicily for Borderline Sicilia, an Italian NGO. With the fundamental programmes for successful integration, such as Italian language classes, left unmonitored by authorities in some districts, many centres deliver only the bare necessities for day-to-day existence.

“They have a place to eat, a place to sleep, but they don’t have ways to enter society, to find work, or learn new skills,” Borghi said. “This creates depression and boredom in many centres, where migrants have little to do with their time, aside from watching TV or surfing the internet.

“Eventually, we see them take jobs in the black market, often in agriculture, where they become part of exploitative networks,” she added.

“Le Mole was a hotel, so it’s nice inside. But there’s nothing there,” Borghi said. “When the place first opened, the residents wouldn’t see anyone aside from the groundskeeper for six months at a time.” 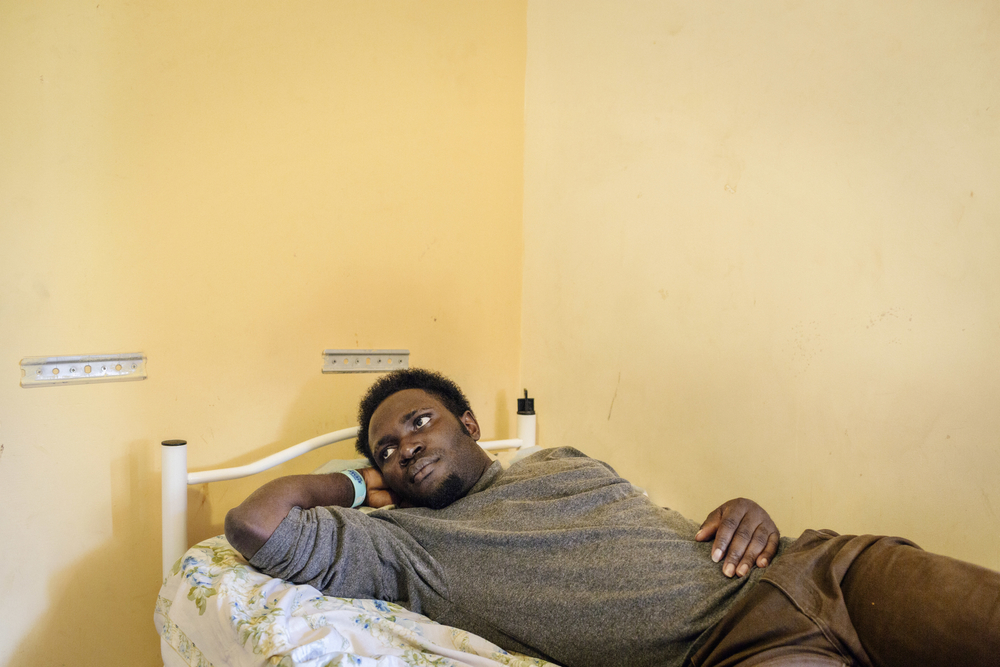 Alessandro Penso/MSF
Sylvester Paul, 26, from Nigeria, at a hotel converted into a reception centre in the province of Trapani

Outside of the state reception system, privately funded centres have been experimenting with alternative approaches in the management and integration of asylum seekers. A home for 30 minors and single mothers run by Mediterranean Hope in Sicily, gives new arrivals direct access to the local community and its facilities simply by being located in the centre of Scicli, a small city in the province of Ragusa.

The centre also employs a full-time psychologist, an education expert, and a cultural mediator to help formulate programmes and activities best suited for its residents. Giovanna Scifo, project manager for the centre, which is funded by the Federation of Evangelical Churches in Italy, said flexibility and creativity were vital to the delicate task of integration.

“The success of migrant centres depends on the will of employees and how motivated they are to help migrants through their first few months in our country,” Scifo said. “This is never an easy task.”

Explaining the difference in the centre’s approach, Scifo said, “We are a home not a house.” She pointed out that the Italian word for reception, ‘accoglienza’, has no direct English translation but generally means taking a person into one’s home and accommodating them.

A recurring theme in discussions about Italy’s reception system and changes under the Minniti decree is criticism of the emergency mode under which authorities continue to operate. Humanitarian aid workers such as Calò, of MEDU, said lapses in migrant healthcare and burdensome paperwork were consequences of patchwork legislation that seems to have been written with limited foresight.

“If the Italian government would stop viewing the phenomenon of migration as an emergency, we would be able to have adequate standards that are applied to everyone in the reception system,” Calò said.

“Because we continue to pursue the dialogue of emergency, despite the many years that have passed with repeating trends, every decision is improvised from the state level to individual districts and we are left with the system you see today.”

Officials with the Italian Ministry of Interior did not respond to IRIN’s repeated requests for comment for this report.

(TOP PHOTO: Emmanuel, 23, from Nigeria, in his room at former hotel in Custonaci, in the province of Trapani. Alessandro Penso/MSF)