Increasing reports of harassment faced by journalists and civil society in South Sudan have raised concern that the world’s newest country is curtailing the basic freedoms it spent decades fighting its northern neighbour for.

South Sudan gained independence in July 2011, after decades of rebellion against Khartoum. Today, Sudan ranks 170th out of 179 countries on the Reporters Without Borders’ press freedom index, while South Sudan is ranked 124th, having fallen 13 places from the 2011-2012 index.

Human Rights Watch (HRW) recently highlighted South Sudan as an area of concern in its annual World Report, calling on the government to "investigate and prosecute attacks on protesters, activists and journalists and pass laws protecting free expression."

Though there had been reports of journalists being detained, beaten and threatened, the first murder of a journalist in the country occurred in December 2012. The government's failure to pass legislation protecting the media has increased concerns about the state of press freedom.

"Every citizen shall have the right to the freedom of expression, reception and dissemination of information, publication, and access to the press without prejudice to public order, safety or morals as prescribed by law," says the country's transitional constitution. "All levels of government shall guarantee the freedom of the press and other media as shall be regulated by law in a democratic society."

But the law is only as good as its enforcement.

On 5 December 2012, political analyst Ding Chan Awuol, who wrote under the pen name Isaiah Abraham, was dragged out of his house by "uniformed men", according to one eyewitness, and shot in the face.

Relatives believe Abraham was murdered for his outspoken political commentary, and said he had received death threats from anonymous callers urging him to stop writing.

One employer, the Sudan Tribune newspaper, says Abraham was called into national security offices weeks before his death to answer for a piece calling for President Salva Kiir's resignation after a contentious deal with Sudan on oil and borders.

Government spokesman Barnaba Marial Benjamin said authorities were "70 percent sure it was an assassination", as public outrage grew and civil society called for the perpetrators to be punished and security ministers to step down.

"The investigation [into Abraham's murder] is going on. Probably some suspects have been arrested," said Minister of the Interior Alison Monani Magaya.

At the end of 2012, after years of hosting one of the most popular shows on Bakhita Radio in the capital, Juba, journalist Mading Ngor returned to Canada. He attributed his departure to a "climate of fear, threats, intimidations, censorship", and numerous encounters with national security officers. In 2012, he was dragged out of parliament, then barred from covering sessions, and later urged by security forces to "cooperate" and to desist from covering sensitive topics such as corruption.

The week after Abraham's murder, security forces killed at least 10 protesters in Wau, the capital of Western-Bahr-el-Ghazal State. 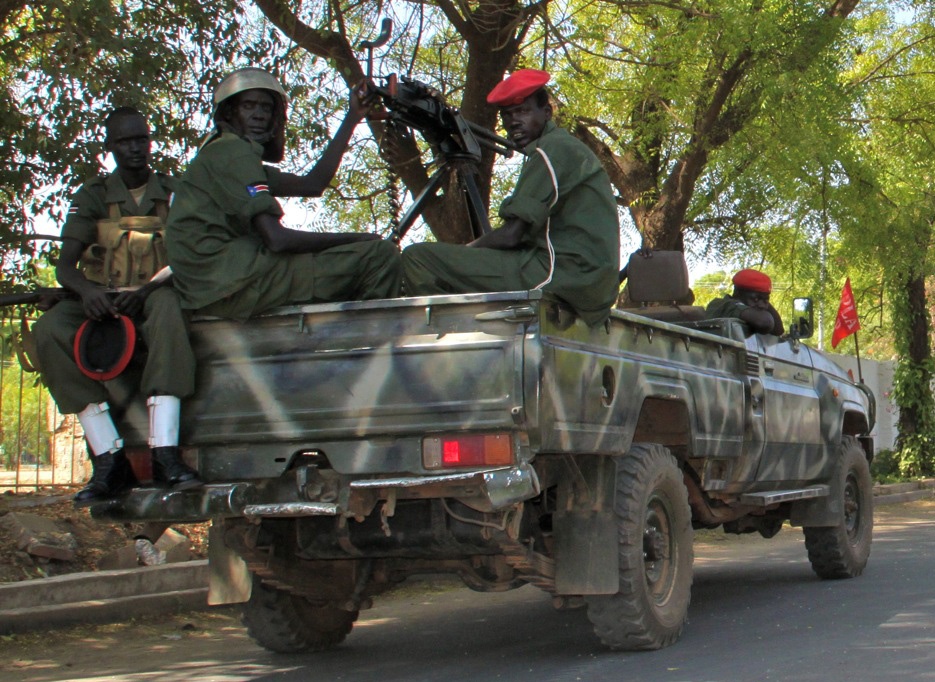 Local government officials claimed that the demonstrators were armed, had razed public buildings, and had hurled petrol bombs during a protest about the transfer of local authority to a neighbouring county. However, footage obtained by broadcaster Al-Jazeera showed protesters waving small branches known as "peace sticks" while peacefully parading through the town before uniformed police gunned them down.

Two employees of the state broadcaster SSTV were subsequently detained, accused of failing to cover the president's Christmas speech in Wau, but local journalists allege it was a witch-hunt against whoever leaked the footage.

"The year ended with two tragic incidents in which South Sudanese lost their lives for expressing their opinions," said Daniel Bekele, Africa director at HRW. "South Sudan needs to show clearly it does not tolerate repression of basic freedoms."

Two weeks after Abraham's death, and as the Wau death toll mounted following reprisal attacks, government spokesman Benjamin warned reporters, "I think you should all be careful what you report, as there is a tendency of collecting information here and there without verifying it with the government."

International journalists are also beginning to feel the heat. After an August 2012 article by McClatchy Newspapers correspondent Alan Boswell suggested US-South Sudan relations were strained, the government spokesperson accused him of being "in the pay of Khartoum" and "an enemy of the peace".

In October 2012, a group of men confiscated Al-Jazeera correspondent Anna Cavell's TV camera while she filmed in a public place in Juba; they warned her that she would be taken to prison.

Cavell said she was told there was nothing anyone could do to recover the camera; she said government officials told her, "We just don't have control over these people".

Authorities often call the shots on what can and should be reported.

Following the 2012 release of a letter, signed by the president, calling for 75 past and present officials to return US$4 billion of stolen public money, newspaper editors said national security officials warned them against covering the story.

"The year ended with two tragic incidents in which South Sudanese lost their lives for expressing their opinions. South Sudan needs to show clearly it does not tolerate repression of basic freedoms"

Editors say they were also told what they could write about during weeks of clashes along the border with Sudan in April 2012. Some have complained about security forces marching into offices and demanding that copy be rewritten.

Many journalists admit that they steer clear of stories relating to security forces altogether. Self-censorship is on the rise following Abraham's death, the Sudan Tribune noted in a January article.

Atem Yaak Atem, the deputy minister of information and founder of The Pioneer magazine, says it will take time for the country's authorities to adjust from a wartime mentality.

"During those days, it was not prudent for people to point out shortcomings, as it would be used by the other side," sometimes to deadly effect, he said.

Atem added that the quality of journalism in South Sudan was poor, with improper fact-checking and a poor understanding of the laws of defamation often landing journalists in trouble.

South Sudan is still struggling to transform a former rebel army of an estimated 210,000 soldiers into a professional national army, and to change the mindset of soldiers and militias who have been absorbed into the army. A major problem is the lack of command and control in a force that may be loyal to one commander or under the pay of certain officials.

"Armed forces who see themselves as 'liberators' are emboldened by a climate of impunity in which their crimes go unpunished," said Jok Madut Jok, undersecretary of culture and a leading academic, in a January paper from his think-tank, the Sudd Institute.

"South Sudan should reverse this worrying trend toward repression of speech and assembly freedoms," HRW's Bekele said. "It should start by thoroughly investigating and prosecuting all crimes against and abuses of those who speak out against the government, including journalists, and by passing relevant laws in line with international standards."

But a senior official provided by the US government in December to assist in investigations into Abraham's death came and left without word, while the government's $50,000 bounty for the killer of Isaiah Abraham is still up for grabs.

Following the Wau shootings, a parliamentary committee and the UN Mission in South Sudan (UNMISS), which sheltered thousands of residents during the violence and ensuing protests, launched investigations into the incident. No results have yet been released.

Significant delays to the constitutional review panel mean that a permanent constitution is unlikely to come into effect when elections are held in 2015.

After eight years of consultations, three draft media laws were submitted to parliament for debate in 2012, but none have yet passed. They will be up for discussion again when parliament reconvenes in April, but many journalists accuse parliament of stalling on bills that would give journalists greater freedom.

"In the absence of laws establishing a legal mechanism to guarantee media freedom and to enable the media to defend their reporting, editors and reporters say they are especially vulnerable to harassment, arbitrary arrest and censorship by security forces," said HRW’s 2013 World Report. "South Sudan also has yet to ratify key human rights treaties, including the International Covenant on Civil and Political Rights (ICCPR) and the African Charter on Human and Peoples' Rights, which would also reinforce free speech and other basic freedoms."