Read about what we achieved.
LIMAYI

It is just before noon in the village of Limayi in northeastern Democratic Republic of Congo (DRC). Half a dozen empty beer bottles lie scattered at the feet of five Congolese soldiers lounging in easy chairs beneath a mango tree. A freshly opened bottle is propped-up against an automatic assault rifle lying in the dust.

The roughly 4,500 people in Limayi, about 25km north of Dungu in the Haut-Uélé District, are increasingly anxious as they believe the dry season at this time of year prompts Joseph Kony’s Lord Resistance Army (LRA) to head south from the neighbouring Central African Republic (CAR) and South Sudan to loot from the relative riches of isolated communities in the country’s northeast.

Villager Faustin Mihinigoyo, 56, told IRIN the soldiers of the Armed Forces of the DRC (FARDC) stationed in Limayi for their protection, “complain to us they only have five bullets and their radios are broken… If the LRA come, they (FARDC) will run away. We are not feeling good.” The soldiers declined to speak to IRIN.

The first attack by the LRA on the village was on 27 August 2008 and the most recent in July 2011. Between these dates there have been many attacks on Limayi -“I can’t even remember the number,” Christophe Eda, the district’s paramount chief, told IRIN, adding that 47 villagers had been killed and 12 abducted, eight of whom had returned.

In the beginning when the attacks came we used to run into the fields, but it was a big mistake as more people were killed. So now we stay in our homes and pray

“In the beginning when the attacks came we used to run into the fields, but it was a big mistake as more people were killed. So now we stay in our homes and pray,” villager Roger Kuyago, 32, told IRIN.

Between 1986 and 2006 the LRA fought a lengthy war with Ugandan security forces. The government established “protected villages” in Uganda’s Acholiland, which at one time formed Kony’s support base, in an attempt to isolate the LRA from the community.

But there were allegations of gross Ugandan police and military human rights violations against the Acholi, who were forced into camps. The LRA’s senior command structure remains populated by the Acholi. Since its expulsion from Uganda, the LRA, numbering a few hundred, has roamed and looted across the DRC, South Sudan and CAR.

In July 2005 the International Criminal Court issued arrest warrants for Kony and four of his lieutenants - Raska Lukwiya, Okot Odhiambo, Dominic Ongwen, and Vincent Otti - for suspected war crimes and crimes against humanity, including the routine use of child soldiers and sexual enslavement.

Subsequently Otti was executed on Kony’s orders in October 2007, apparently for his willingness to seek peace and because of his popularity among the LRA rank and file; Lukwiya was killed during a clash with troops in northern Uganda in 2006.

Stuck on the wall behind the desk of Lt-Col Golam Faruque, chief coordinator of MONUSCO’s (UN Stabilization Mission in the DRC) Joint Intelligence Operating Cell (JIOC), housed in a container complex at Dungu airstrip, are grainy wanted posters of Kony, Odhiambo and Ongwen.

On his last day of a year-long secondment to MONUSCO before returning to Bangladesh, Faruque told IRIN: “If anyone says MONUSCO is not doing enough to protect civilians [from the LRA], they don’t know the reality.”

He said while the UN operation in the DRC in terms of Blue Helmets was the world’s largest, only about 1,000 troops were ranged against the LRA in “an area twice the size of England,” with few roads, rugged terrain and an opponent which loots and moves on. “We are forced to be defensive, rather than offensive”.

However, in a break with normal operating procedures during the 2011 Christmas period, MONUSCO deployed “huge forces” in a 15-day operation to establish a presence to thwart any repeat of the LRA Christmas massacres of recent years.

Against such a nimble, ruthless and elusive armed group, the most effective weapon - in the absence of more boots on the ground - is coordination and intelligence. The JIOC was formed in 2010 against a “background of different forces (FARDC, MONUSCO, Ugandan People’s Defence Force [UPDF]) operating on the same battlefield against one opponent” and to share information, Faruque said.

Since then MONUSCO’s Disarmament, Demobilization, Repatriation, Reintegration, and Resettlement (DDR/RR) have joined, as well as two representatives of the about 100 US military advisers dispatched by President Barack Obama to assist in coordinating the regional fight against the LRA. (Ugandan troops left the DRC in November 2011 at the request of the country’s president Joseph Kabila.) 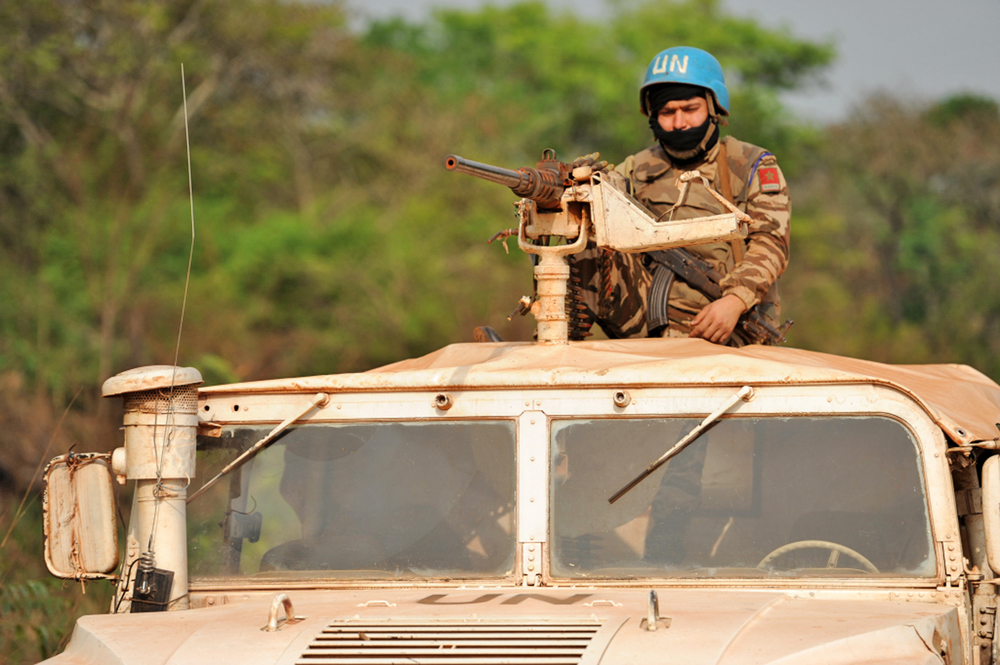 Following authorization from the Africa Union Peace and Security Council in November 2011 to deal decisively with the LRA, and with UN support, it is envisaged that the JIOC will be replicated in CAR and South Sudan with representatives from all affected countries. There was also a possibility that Ugandan military liaison officers could be deployed to Dungu, “but that was a diplomatic procedure,” Faruque said.

Since the deployment of US military advisers to the region late last year, he said, information gathering had been boosted by the deployment of an US C-12 reconnaissance aircraft, “codenamed Tusker-Sand flying over the battlefield almost every day”.

According to a 2009 web report by Jane’s Defence Weekly, a leading authority on military technology, the manned C-12 reconnaissance variant of the Hawker Beechcraft, designated MC-12W, has been deployed in both Iraq and Afghanistan “to aid high-value targeting and other tactical intelligence missions”.

On the ground surveillance is being stepped up with the expansion of high frequency (HF) radios to report incidents of LRA violence, kidnapping and sightings with the assistance of the San Diego-based NGO Invisible Children and the Catholic Church. A more comprehensive picture of a vast battleground stretching across three fragile and undeveloped countries is gradually being built up.

However, information can lead to fear: Reported LRA activity in the vicinity of Limayi in early March 2012 has seen the community hemmed in by fear, with only those fields a kilometre from the village being cultivated, while others stretching up to 9km away are neglected.

“Recently someone was taken by the LRA close to here [Limayi] and then released. He [the abductee] said they [the LRA] had new [FARDC] uniforms and new guns,” a villager told IRIN.

The high frequency radio system is an upgrade of a radio network established in 1974 by the Catholic Church, which was originally designed to provide a channel for remote parishes for prayer, messages from local administrators and a conduit for merchants to reach distant markets.

In 2009 and in response to increasing LRA violence, Father Abbé Benoit Kinalegu, director of the Dungu-Doruma Diocese, recalibrated the network as an early warning system and approached Invisible Children to assist in the network’s expansion.

Sarah Katz-Lavigne, Invisible Children DRC project coordinator based in Dungu, told IRIN high frequency radio masts had been installed in 11 communities in Haut-Uélé District as well as seven in Bas-Uélé, with a further nine planned for the district. In CAR two pre-existing HF radios were being used and the plan was to have 11 operational HF radios in communities by October 2012.

Adam Finck, Invisible Children programme director for Central Africa, said each radio installation, including equipment and training of operators, cost about US$20,000.

At 8am and 1pm daily, community radio operators report any and all suspected LRA activity to the Invisible Children’s Dungu offices, which is then disseminated to the UN Office for the Coordination of Humanitarian Affairs (OCHA) and made available to all humanitarian actors, including MONUSCO and JIOC.

Invisible Children only publish information on LRA, or suspected LRA, activity on their LRAcrisistracker.com website, while other acts of violence in the region - where aid workers say the “DRC government is absent” and there are alleged human rights abuses by FARDC and Ugandan troops operating with the assistance of US forces in CAR - never get a mention.

The single-minded focus of the NGO on Kony and his capture or killing, has created something of a firestorm after an Invisible Children film, Kony2012, went viral on the Internet recently and, although endorsed by global celebrities such as Oprah Winfrey and Angelina Jolie, has been widely condemned by analysts as “self-aggrandizing foreigners” creating a recipe for increased violence in the region.

Michael Deiberta, a visiting fellow at the Centre for Peace and Reconciliation Studies at Coventry University in the UK, and the author of a forthcoming book entitled DRC: Between Hope and Despair, explained the problem in a Royal African Society article: “By blindly supporting Uganda’s current government and its military adventures beyond its borders, as Invisible Children suggests that people do, Invisible Children is in fact guaranteeing that there will be more violence, not less, in Central Africa.”

Invisible Children uses a scale of 1-5 to determine LRA activity, with “one being the least reliable and five being the most reliable,” according to its LRAcrisistracker website. “A verification rating of 2 through 5 is considered adequately verified to be reported publicly, and is therefore mapped.”

An international aid worker in the region who preferred anonymity told IRIN Invisible Children’s information gathering system was skewed towards increasing the incidents of LRA activity “while the truth is a bit dark and not so simple”. The final arbiter of LRA activity remains the JIOC.

The aid worker said his NGO also provided security information, but the reports it had filed using such language as “presumed LRA, or unknown persons, always end up as LRA”.

It was common for civilians to carry weapons, the aid worker said, leading to misinterpretations. There was banditry in the area and “FARDC knows exactly how to behave as the LRA.”

Invisible Children’s Katz-Lavigne, when asked by IRIN whether banditry could be misconstrued as LRA activity, said: “It is tough to say banditry or not.”