Baswra squats on a dirty street corner in the eastern Afghan city of Jalalabad, watching fellow Afghans walk by with packages of assistance from aid agencies. When the door to the distribution site opens, she throws herself at it, waving documents in the face of anyone who will hear her story.

A widow, Baswra returned from a refugee camp in the tribal areas of Pakistan in 2002. Ten years later, she still has no land and no income.

“I don’t know where to look for help,” she pleads to Mohammad Eamal, a programme associate with the UN Refugee Agency (UNHCR).

He studies her documents and informs her that she falls outside the mandate of assistance.

The aid being distributed on this day is targeted at vulnerable Afghan refugees who have recently returned from Pakistan to a homeland that cannot absorb them. Like Basrwa, many no longer have land and cannot find jobs in their villages of origin.

“We’re focusing on the vulnerable of recent years. We can’t help everyone,” Eamal tells IRIN, as Baswra waits expectantly, a pout covering her missing teeth.

She spends her days shuttling in plastic sandals and a dirty shawl from the Department of Refugees and Repatriation (DoRR), where she has applied - unsuccessfully - for a land allocation to this aid distribution point, looking for help for herself and her six children.

“We assume that those who arrived years ago have been able to resettle,” Eamal says. He looks at Baswra and then adds: “But we have found that many don’t.”

UNHCR says it has realized in recent months that for the past decade, it has followed a misguided strategy in dealing with the nearly five million refugees - almost a quarter of the population - it has helped return to Afghanistan since 2002.

Despite assistance in relocating and an initial cash grant, UNHCR says most returnees have failed to re-integrate because what they need is long-term development work.

“The needs of the returning population [are] beyond the humanitarian scope,” Suzanne Murray Jones, a senior adviser at UNHCR in Kabul, told IRIN.

In December, Peter Nicolaus, UNHCR representative in Afghanistan, called it “the biggest mistake UNHCR ever made... [  ] We thought if we gave humanitarian assistance then macro-development would kick in."

UNHCR is now waking up to the reality that this never happened.

The Afghan government, dogged by corruption, lack of capacity and continued conflict, has been incapable of providing for returnees.

Billions of dollars in aid spent in Afghanistan over the last decades have not had the desired effect, in part because much of the aid has been driven by political and military goals, not humanitarian and developmental needs. And aid that has targeted the vulnerable has not been well-coordinated.

[It was] the biggest mistake UNHCR ever made... We thought if we gave humanitarian assistance then macro-development would kick in

“Everyone is working in their own silos. It has not been systematic. There hasn’t been an integrated approach by everybody,” Murray Jones said.

For too long, she said, aid workers failed to address important questions: “Where does humanitarian assistance stop and where does development aid begin? How do we bridge the gap?”

As a result of that gap, the population in Kabul has tripled in just seven years and the government’s land allocation scheme for returnees is so overwhelmed there are already tens of thousands of families on the waiting list for Nangarhar Province alone.

Nearly 60 percent of communities surveyed in a recent study by UNHCR and the Ministry of Refugees and Repatriation said returnees lived in worse conditions than local communities.

Many of them live six families to a house “that is not meant for living in, or on highways and main roads, or even in deserts, beneath the mountains,” said Ghulam Haidar Faqirzai, DoRR director in Nangarhar Province, which borders Pakistan. Others, he said, live in illegal settlements.

Reza Gul lives in one of those settlements, atop a steep hill of winding dirt paths where men smoke opium in the open and dusty children run around in open sandals in the depths of winter. She lives without water or electricity in a home she does not own. UNHCR helped her build an extra room to her house, but her situation is fragile.

“If we are kicked out, we’ll have to live under a tent,” she told IRIN.

Since returning from Pakistan, she has had no intention of going back to her village of origin, despite her current living conditions. This settlement, Majbooraba, is in Jalalabad, a large city where her husband can find work.

Asked what it would take for her to go back, she offered a long list:

“If we are provided with land, employment, water and work for my husband - that’s all I’d need.”

Stories like these have forced UNHCR to reconsider its approach to returnees. 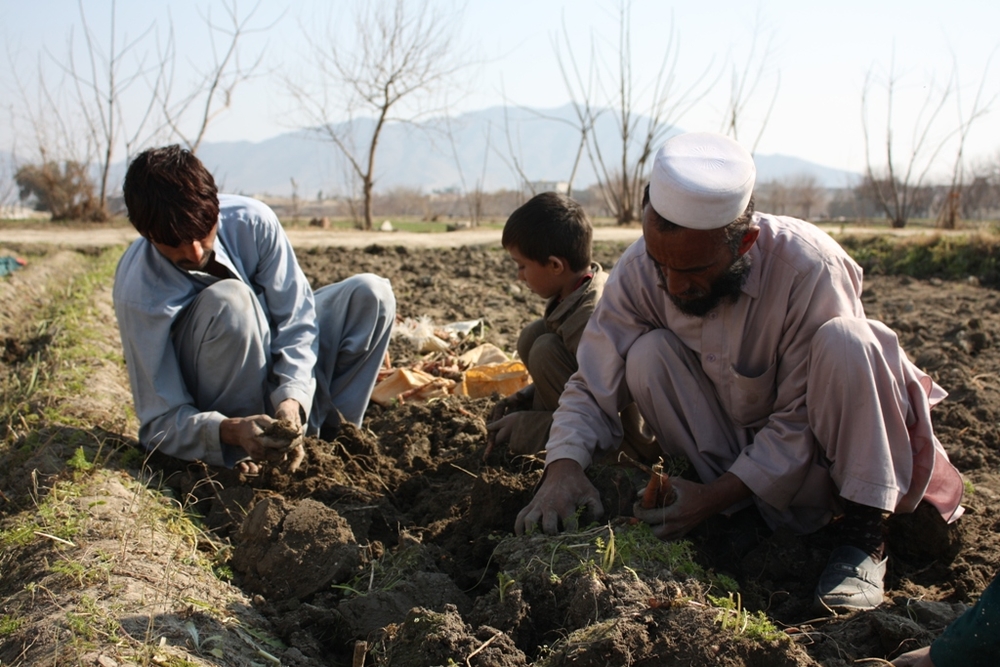 Saracha, a vast agricultural village 10km outside Jalalabad, was on the frontline of the war between the Soviets and Afghan rebels in the 1980s. Just minutes from the airport that served as the Russian base, it was often hit by rockets.

Most of the population fled to Pakistan in the 1980s and again during the civil war of the 1990s. It was not until 2004 and afterwards that they returned en masse to find damaged irrigation canals, collapsed homes and landmines in their village. Children walked to Jalalabad city for school and had to travel to Pakistan for any serious health issues.

The conditions in Saracha were ripe for poverty, disillusionment, secondary displacement or recruitment to militant groups. But the villagers got together, elected a leader and started rehabilitating their communities. Then they contacted aid agencies for help.

In 2011, UNHCR began a pilot project in the village that aimed at focusing comprehensive development assistance in areas of high refugee returns.

At a cost of US$1.4 million, development partners have helped the village build a micro hydro plant; an irrigation system; and a waste water canal. They have also provided agricultural training, promoted honey and vegetable production, offered literacy and computer classes, and provided poultry as an income-generating mechanism to vulnerable families.

“Before there would be one project here, one project there. But under this programme, it’s a package,” said Golam Nasseer, head of one of the sub-villages that make up Saracha. “Our village has been rebuilt. Now, it’s like Paris,” he joked.

The idea of the project is to pool resources, including those that already exist in the country, and direct them towards communities where refugees are returning en masse. UNHCR will highlight the areas that need investment; and ask development partners to focus their energies there.

The model will be presented at an international stakeholder conference in Switzerland in May. It hopes to replicate it in 48 areas of high return across Afghanistan.

“Once we complete [work] in [one] village, we move on to another,” explained Eamal, the UNHCR programme associate.

For more, visit IRIN's in-depth: From pillar to post – the plight of Afghans abroad