Become a member of The New Humanitarian.
TRIPOLI

A major challenge facing Libya as it emerges from a nine-month civil war will be reconciling and integrating thousands of Tawergha accused of killing and raping residents of Misrata on behalf of deposed leader Muammar Gaddafi.

Theirs is the most extreme test of national reconciliation for a government that will have to integrate several groups of Gaddafi loyalists, including those in the towns of Bani Walid and Sirte, if the revolution is to be successful.

“The principle is extremely important,” said Emmanuel Gignac, head of the UN Refugee Agency (UNHCR) in Libya. “The country will not stand if you have rejected communities within it."

The dark-skinned Tawergha minority - former slaves brought to Libya in the 18th and 19th centuries - resided until recently in a coastal town of the same name 250km east of the capital Tripoli.

With the rise to power of the rebels, the Tawergha are now on the defensive. Their town sits empty - doors hanging open and homes burned; the sign leading to the city has been changed to New Misrata and its population told not to return.

In an abandoned Turkish company compound on Airport Road in Tripoli, more than 1,500 displaced Tawergha spend their days brushing away flies and watching their children play with toy guns amid piles of rubbish.

Here, women and children have huddled around on the uncovered mattresses they sleep on, weeping. They arrived in early November after a physically and emotionally draining journey from Tawergha, having been displaced by armed men every time they settled somewhere new.

Every one told of a father, son or brother who is either dead or in jail.

"If we go elsewhere, they will kill us slowly... If the new government refuses to let us return, we will take up arms and take our town back by force."

One of the women had received news from the International Committee of the Red Cross that her son, Ali Bakara Ammar, died in detention - accused of having kidnapped women from Misrata, though she insisted “he can’t even drive a car!” She also said she saw a man hung from the ceiling by his ankles.

Next to her, another woman said her three sons - none of whom fought in the war, she said - have been taken to Misrata for detention. She suspected she would never see them again.

In the corner of the darkened locker room they were staying in, a young girl, Brega, cried over her dead father, who was beaten before her eyes.

Another young woman told stories of Tawergha detainees receiving electric shocks, having cold water poured on them and being burned with cigarettes by the revolutionaries from Misrata who were holding them. “This is Abu Ghuraib, not Libya!... We have done nothing wrong. If they continue to beat us and attack us for no reason, it will become a cycle,” she said.

Several times in November, rebels armed with heavy weapons entered sites for displaced Tawergha in Tripoli and in the eastern city of Benghazi to arrest residents suspected of committing crimes during the war.

In an attempt to “terrorize” the people, as one aid worker described it, they kicked in doors, fired shots in the air, pulled all the men to one side and uttered “unspeakable” words, according to one Tawergha leader, before hauling several men away.

Aid workers had been unable to stop these incursions because of the vast number of independently-operating brigades and the fragmented military command structure.

In recent days, the situation has improved. There have been no aggressive incursions; some Tawergha prisoners have been released; and the Tripoli Military Council has reportedly agreed with rebels from Misrata that they no longer enter the camps.

Still, the Tawergha have staged demonstrations in protest at their treatment, and aid workers are worried: "The concern is that marginalized communities like the Tawergha, if driven to the limit, may resort to using force to protect themselves," Samuel Cheung, a senior protection officer with UNHCR, told IRIN. 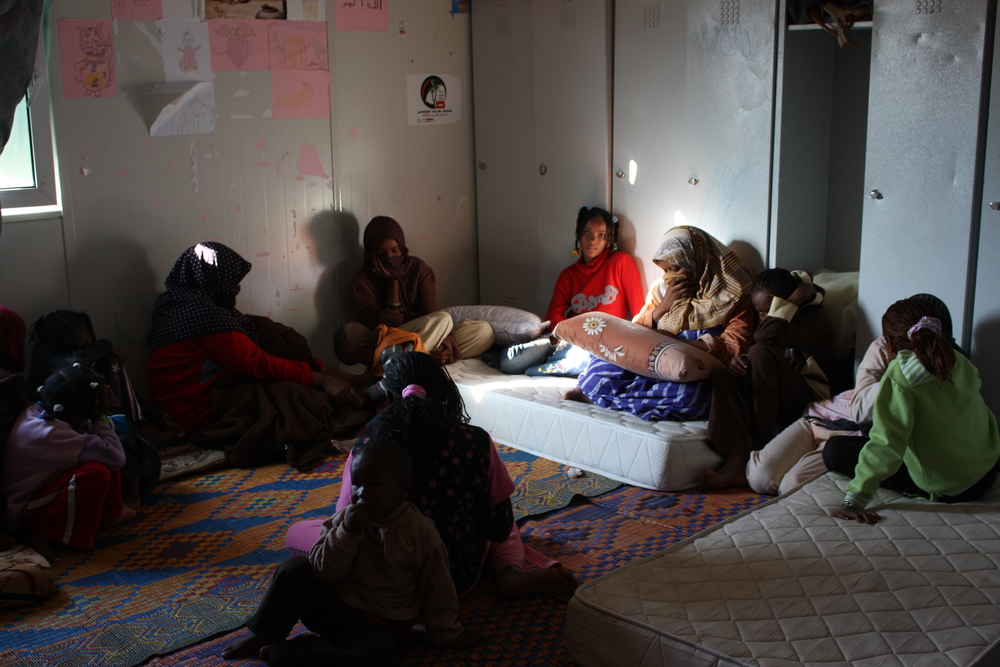 Perhaps more worrying than the incursions themselves is a belief among many Libyans that the town of Tawergha - and its population of 35,000 - is simply “getting what it deserves”. Many in Misrata say they can forgive the alleged killings, but not the alleged rape. And many more do not differentiate between fighters and civilians.

The general attitude towards them - even among the most educated and strongest proponents of the rights-based revolution - is one of rejection.

“We all look negatively upon the Tawergha,” said one Libyan aid worker. “They are not accepted here.”

“It’s easier and better that they go away,” added Abdullah Maiteeg, a fighter from Misrata.

This simplistic view of just “dumping them” in a village in the south, as one aid worker characterized it, is mirrored by the Tawergha’s insistence that a return to their land is the only available option.

“A small tent in Tawergha is the highest building in the world to me… better than a palace in Zawiya,” said Mohsen Mohammed*, a supervisor of the Tawergha site in Tripoli. “I swear by God we will not move.”

Misratan leaders have softened their original stance that the Tawergha can never return. Ramadan Ali Zarmouh, head of the Misrata Military Council, said they would be free to return as soon as those who allegedly committed crimes were put on trial.

But there is until now no justice system to try the detainees, and according to the UN Secretary-General’s report to the Security Council on Libya, 7,000 prisoners - Tawergha and others - are currently being held in prisons and makeshift detention centres, “with no access to due process”.

Some observers are skeptical that a return will ever be possible.

As one foreign researcher who has spent months in Misrata put it: “Tawergha, as it stands now, will never exist again.”

But officials are less pessimistic. They say with time, heightened emotions and heated passions will simmer.

“It’s not a question of whether [this issue] can or cannot be resolved. It will have to be resolved,” said Georg Charpentier, UN humanitarian coordinator for Libya. He sees reasons for hope.

Where people used to get upset at the mere utterance of the word “Tawergha”, the taboo is beginning to subside and people are more willing to discuss the issue, Charpentier told IRIN. Where the government used to rely on the international community to address the needs of displaced Tawergha, it is now increasingly taking on that responsibility, he added.

But asked if national reconciliation was possible after the killings, the beatings and the torture the Tawergha have endured, women in the camp looked at each other, and then lowered their faces in silence, unable to answer.

For their part, many of the people of Misrata seem to have a narrow definition of national reconciliation, a process they see as helping those who supported Gaddafi in loyalist strongholds like Sirte and Bani Walid understand what Gaddafi was really like, and bringing them into the revolutionary fold.

“National reconciliation? In general, sure,” said Maiteeg, the Misrata fighter. “But the Tawergha is a totally different subject.”

Charpentier acknowledged it could take years before transitional justice and national reconciliation were possible. 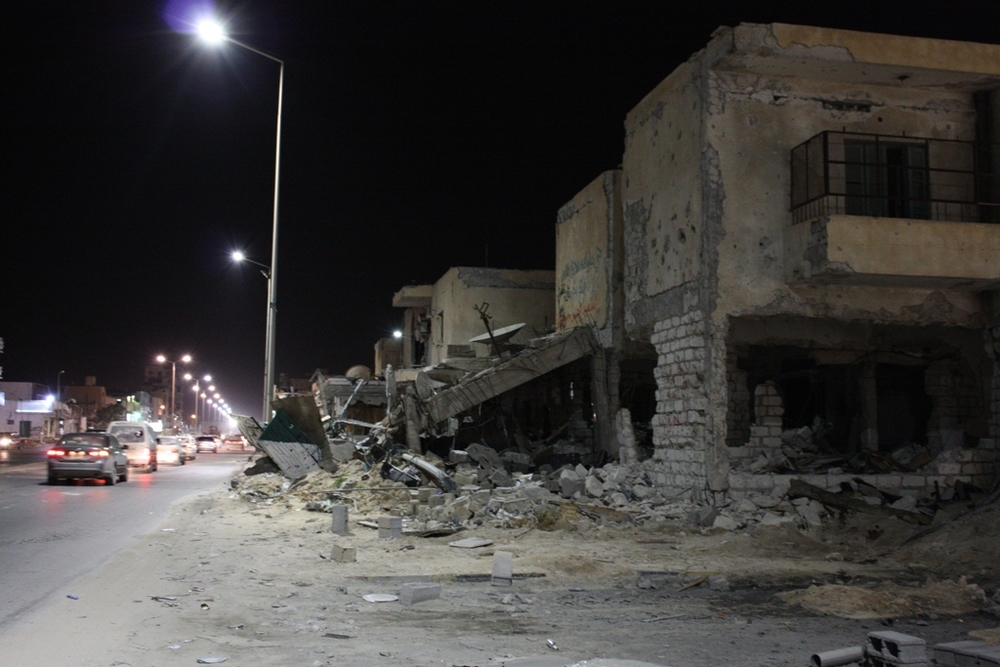 Heba Aly/IRIN
Deposed leader Muammar Qaddafi used Tawergha as a base to attack Misrata, which was heavily damaged by fighting during the war

What actually happened in Misrata?

Part of the problem is that no one really knows what and how much happened in Misrata - estimates of how many people were allegedly involved in crimes range from 1,500 to 9,000 - and for cultural and other reasons, some people are fiercely opposed to any kind of investigation.

“To have the International Criminal Court come and have doctors investigate the rapes… no way,” Maiteeg said.

Others say an acknowledgement of crimes committed would go a long way to diffusing Misratan anger. But any such truth and reconciliation process would require “a strong message and vision by the National Transitional Council (NTC) and the government,” according to Ahmed Safar, a junior minister in the new cabinet, originally from Misrata - something that has so far been absent.

On 10 December, the NTC held its first national reconciliation conference, in which interim Prime Minister Abdel Rahim al-Kib said the future “cannot be built with revenge as a base,” Agence France-Presse reported.

But among the interim government’s competing priorities are recuperating millions of dollars in frozen funds to rebuild the country; preparing elections in eight months’ time; collecting weapons which have spread across the country; and providing alternatives to the young men who fought during the war.

“The NTC doesn’t have a plan for the Tawergha,” one aid worker said. “The sensitivities of it are such that no single leader in the NTC can handle this issue without taking some significant political heat from their constituencies.” So far, Safar added, initiatives towards national reconciliation have been piecemeal, lacking a “dedicated effort”.

Sites for displaced Tawergha are growing by the day, as people from Tawergha come out of the woodwork. UNHCR says some 20,000 Tawergha are registered in sites run by LibAid in Tripoli, Benghazi, Tarhouna and other smaller towns and cities across the country.

Another 7,000 or so were recently discovered in the south, near the town of Sebha. But Tawergha's population was originally some 35,000 people. The rest remain unaccounted for - either staying with relatives or friends under the radar or hiding in the desert, afraid to emerge.

In the interim, high level aid officials advocate a temporary solution that would improve the living conditions of the Tawergha.“Return is not possible at the moment. So we must prepare a plan B,” said Khaled Ben-Ali, chairman of the Libyan Humanitarian Relief Agency (LibAid). “If it’s going to be a long-term wait, you cannot have these people living in public houses or tents or in an inhumane manner.”

The NTC has asked him to study the feasibility of building “a whole city for Tawergha” until national reconciliation becomes possible. Sites near the southern oasis town of Jalo, or Sirte, Gaddafi’s hometown, are under consideration, he said.

But this plan, too, will face resistance.

“We will not leave Tripoli unless it’s for Tawergha,” said Mohammed, the supervisor of the Tawergha site in Tripoli. This stems, in part, from the fear of an existential threat. “Some people will try to disperse us all around, like the Jews… We have to stay put together… If we go elsewhere, they will kill us slowly.”

He said he had hope that the new government would fix the problem - one he characterized as a national issue, not a Misrata-Tawergha issue - and arrange for the Tawergha to eventually return home.

“But if the new government refuses, we will take up arms and take it back by force.”

*not his real name