Kenya is at risk of plunging into a new wave of violence, despite progress in negotiations to end a political crisis, because several armed groups are mobilising on all sides of the country’s ethno-political divisions, according to the International Crisis Group (ICG) think-tank.

Firearms are much less widely available in Kenya than in neighbouring countries. In the context of this article, “armed groups” include those using machetes, spears, poison arrows and clubs.

Almost two months into the crisis, low-level insecurity persists in some areas and the threat of further unrest is hampering the delivery of essential assistance to displaced people and others affected by the crisis. UN personnel, for example, must observe stringent precautions, including the use of armed police escorts, when travelling in the Rift Valley Province.

Informal gangs and militia are responsible for most of the estimated 1,000 dead in post-election violence, while attacks and threats have been used to deliberately drive away minority groups from their homes and workplaces.

The protection of civilians from harm and abuse is a key humanitarian concern, and as protection expert Liam Mahoney writes in Proactive Presence (2006), "A good protection analysis also needs information on abusers."

“Extremists and militia are preparing for new confrontation on both camps and ODM [the opposition] believes that if international mediation fails, its only protection against repression and hope for a settlement will be its capacity to raise the stakes through violence," ICG stated in a report, Kenya in Crisis, released on 21 February.

A group of displaced women gather to await distribution of clothes donated to them at the Nairobi Showground camp for the internally displaced on 13 February 2008. 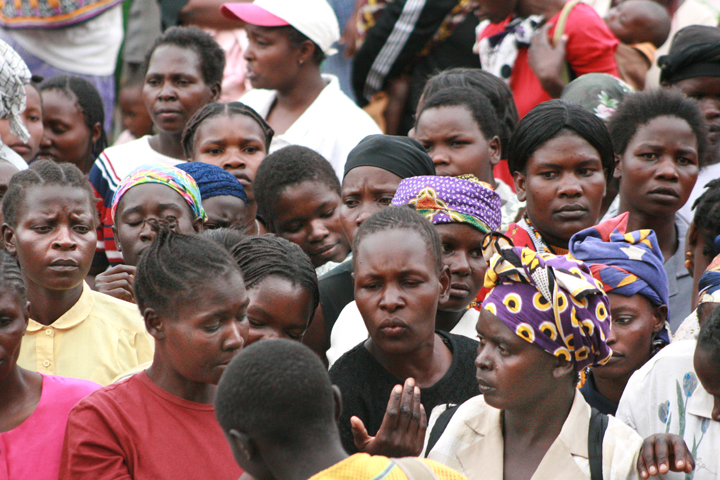 While it is common for young men from many ethnic groups in Kenya to undergo initiation rituals and induction into legitimate peer groups armed with a variety of weapons (but rarely firearms), the politicisation of these groups has increased dramatically since the 27 December election deepened ethnic divisions, observers note.

What follows is a brief overview of available information on some of the armed groups active in Kenya, based in part on the ICG report. Much is difficult to confirm, but our summary is also based on local media reports, interviews with slum residents, political observers, academics, village elders and religious leaders.

A secretive, outlawed and quasi-religious group dating back to the 1980s, whose exclusively Kikuyu male membership is drawn mainly from Central Province. Mungiki (“multitude” in Kikuyu) claims ideological links with the anti-colonial Mau-Mau movement. While rooted in the Central Province, Mungiki has a strong presence in the slums of Nairobi, where it controls and charges for access to basic services such as electricity, water and sanitation. It is alleged to have close links to senior Kikuyu politicians.

Before the current crisis, tenants moving in or out of some slums had to pay Mungiki Ksh150 (just over US$2), which soared to Ksh2,000 ($28.50) once violence broke out. The group also operates protection rackets, including in the public transport sector, confiscating the property of small businesses that refuse to pay a daily “fee”.

Mungiki also holds “trials” for people who violate its strict rules of dress or behaviour, detaining, maiming and even killing those it finds guilty.

Security forces conducted a major crackdown on Mungiki in mid-2007, arresting and killing many of its members. But immediately after the 30 December 2007 announcement that the incumbent Mwai Kibaki, a Kikuyu, had won the presidential election, the group made it plain it was far from extinct, killing and mutilating members of pro-opposition ethnic groups.

And when a second wave of violence broke out in late January, Mungiki organised “the systematic, brutal killings of women and children so as to expel Luo and Kalenjin from Kikuyu-dominated areas” in the Rift Valley towns of Naivasha and Nakuru, according to ICG.

“Mungiki also holds 'trials' for people who violate its strict rules of dress or behaviour.”

"Mungiki now casts itself as the defender of the beleaguered Kikuyu in the Rift Valley," ICG stated in its report.

"Its handlers and supporters, who are said to include some senior members of the Kikuyu elite, want to make it an effective counterweight to the Kalenjin warriors [see below], and there are reports it is accumulating weapons, including guns. The sect is also bringing young men from Central Province for oathing and then transferring them to the Rift Valley for operations," the ICG report stated.

Weapons used by Mungiki include machetes, knives and clubs.

Well-organised community defence training forms an integral part of the graduated progress from childhood to adulthood in the seven ethnic groups collectively known as Kalenjin. A specific name is used for each stage of this progress. Young men in these ethnic groups, where tradition demands a strict respect of hierarchy and obedience to elders, also undergo circumcision as a rite of passage. As a result, young Kalenjin men develop a certain esprit de corps with their age mates, a trait that facilitates mobilisation.

Such groups were particularly active in Uasin Gishu district, which includes the town of Eldoret, where they have been accused of fomenting much of the violence.

He said the Group of 41 was reported to be well-organised and commanded, “probably by people with a military background”, added Okumu, who is analysing state violence and radicalisation of armed groups after the elections.

He explained that this group’s name refers to the 41 non-Kikuyu communities in Kenya - a sort of “us versus them”.

Okumu said the People’s Liberation Army’s agenda was reported to be “liberating” land owned by Kikuyus in the region.

According to ICG, the young men behind the violence in Eldoret “usually took orders from the elders of their settlements, who still wield considerable influence over some sectors of rural communities”.

The weapons of choice for the Kalenjin warriors are spears, bows and poisoned arrows, machetes and clubs. 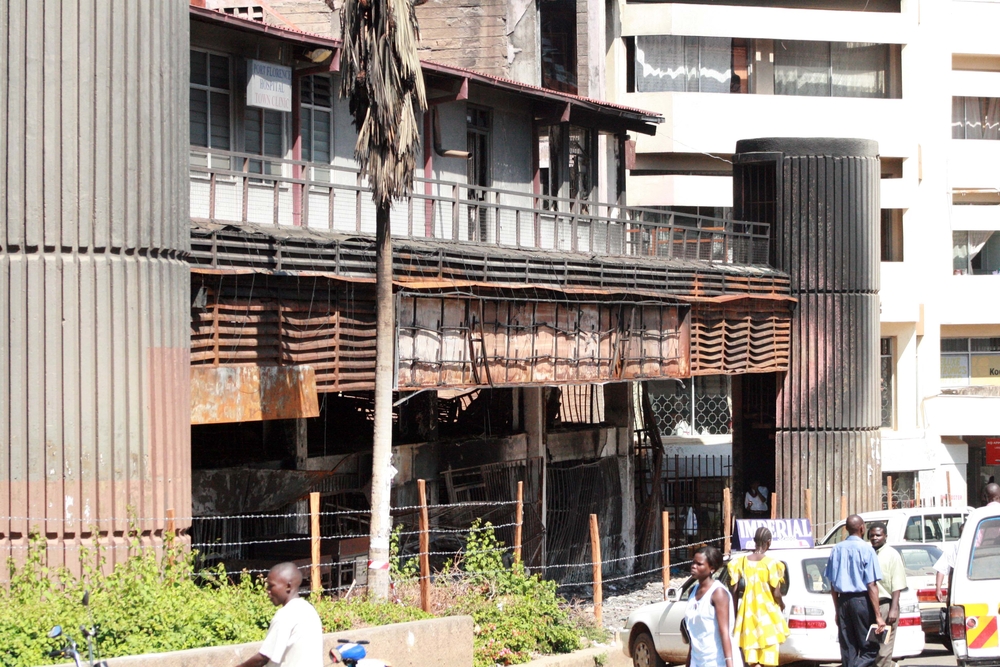 Julius Mwelu/IRIN
A building burnt by arsonists during the post-election violence in Kisumu city, Kenya.

The Sabaot Land Defence Force has been blamed for most of the violence that has rocked the western district of Mt Elgon in the past two years. It was formed after claims of injustice over land allocation in a settlement scheme in the district.

The Mt Elgon conflict involves two main clans of the dominant Sabaot community - the majority Soy clan and the minority Ndorobo clan - and revolves around disputed government allocation of land to squatters in a settlement scheme known as Chebyuk. The district has an estimated population of 150,000; government officials estimate 45,000 people have been displaced and 132 killed since 2006.

"The SLDF is now the most powerful and best-armed militia group operating in the west," ICG said. "Its hit-and-run attacks from the Mt Elgon forest are a major challenge for the authorities, who appear incapable of quelling the rebellion.

"The group is officially headed by a man called Wycliffe Matakwei Kirui Komon, but there is speculation the real leader is a newly elected ODM parliamentarian from the region, though he has denied any links," ICG reported.

The SLDF is one of the few non-state groups in Kenya that possesses firearms. Unconfirmed reports suggest the group’s arsenal includes automatic rifles and rocket-propelled grenade launchers.

Chinkororo, outlawed in the 1990s, is the Kisii equivalent of Kalenjin warriors, and represents the armed wing of the Abagusii community, which is found in several districts in the western ethnic Luo-dominated Nyanza Province.

Traditionally, Chinkororo was a community defence force, guarding territory against cattle rustlers and other perceived "enemies". The Chinkororo also undertook retaliatory attacks whenever there were raids in Kisii areas. Since the post-election violence, elements of the Chinkororo have engaged in clashes with Kalenjin youths from the neighbouring Sotik district in the Rift Valley Province.

Weapons used by the Chinkororo include machetes, spears, clubs, bows and arrows.

This little-known group is said to be based in the coastal district of Kwale. In June 2007, police launched a manhunt in the region for suspected members of an illegal group calling itself the Mombasa Republican Council. Days later, the police ambushed and arrested several suspects in the Mulungunipa Forest as they trained with the alleged intent of causing “chaos” at the coast. However, charges against the group were dropped after they had been held in remand prison for several months.

The youths arrested were armed with machetes and knives. The police later said they were looking for the brother of a then cabinet minister, who was the alleged ringleader of the youth in Mulungunipa forest. The suspect was described as a former soldier who had been sacked from the armed forces on disciplinary grounds.

Members communicate and identify themselves via a system of secret hand signals. Like Mungiki, the group runs extortion rackets, notably on public transport operators.

"Taliban has no membership oath or cells throughout the country, but it does have squads in various slum locations," ICG stated. "Its leader was jailed in 2002, after skirmishes with Mungiki over control of these illegal activities, especially levies on matatus [minibus taxis] using Juja Road."

The weapons of the Taliban include slingshots and machetes.

Vigilantes active in Kibera, Kenya's largest slum, whose members are drawn mostly from the Luo community, and use slingshots and knives.

Another vigilante group based in Kibera, including members from the Luo and Luhya communities, using slingshots and knives

Other groups that have been referenced in recent years but details are scant include Kebago (Kisii) and Sungu Sungu (Nyanza Province).