Along with his wife and eight children, Fuad Essa al-Azzawi has been made homeless three times, by war and by weather.

The family fled their hometown of Mansouria, northeast of Baghdad, when the so-called Islamic State (IS) took over in June 2014. When the Iraqi army chased IS out, the Azzawis returned, only to find their newly built house in ruins. They moved into a hut made mostly of mud.

But the modest shelter was washed away by the heavy rains that have inundated much of the country since late last month, affecting an estimated 84,000 already displaced people and forcing Prime Minister Haider al-Abadi to declare a state of emergency in the worst-affected areas.

"We were happy when the town was liberated from IS, and we thought we would be happy from then on,” the 41-year-old farmer told IRIN. “But … the flooding was worse than IS.”

The mud ceiling collapsed on Azzawi’s pregnant wife. She miscarried, and the family was left homeless and desperate yet again.

"I have no home anymore,” said Azzawi. “I don't know what to do or where to go."

Iraq is the world’s second most dangerous country, according to the Global Peace Index. Only Syria ranks higher. The UN counts 559 civilians killed by terrorism and armed conflict in Iraq in October alone.

What is less well known is that its harsh climate, heavy rain as well as extremes in temperature, can also prove fatal. At least 58 people have died in the recent floods, most killed by electrocution in the capital. Another death was reported in Kalar, a town in the semi-autonomous Kurdistan region, where flooding caused a man’s house to collapse on top of him.

Roads across the country were cut by the waters and sewage backed up. The government hastily assembled rescue teams.

The downpours were particularly devastating in Baghdad, where crumbling infrastructure, weakened by 30 years of war and endemic corruption, played its part too.

This pattern of weather-related mass dispossession is repeated every few years.

This year’s rains also hit northern Iraq, causing flash floods in the Kurdistan cities of Erbil and Sulaymaniyah. Aid workers said water levels reached up 1.5 metres inside some houses. In Kalar, local authorities reportedly alerted civilians about the rising waters by firing off rounds of bullets.

Some 3.2 million Iraqis have been displaced by the violence since January 2014.

One in five (some 21 percent) live in what the International Organization for Migration calls “critical shelter,” including unfinished buildings and informal settlements, leaving them especially vulnerable to harsh weather.

A particularly stark example can be found near Kalar, where Oxfam reports that some 1,500 internally displaced people (IDPs) live in mud huts intended for livestock. The British charity managed to deliver plastic sheets for rudimentary coverage to most of those families before the most intense rains hit, but 360 people were left exposed when Oxfam couldn’t reach them in time.

In the provinces of Baghdad and Anbar, the International Committee of the Red Cross said it helped 22,500 IDPs who had been moved to schools, mosques, and other public buildings when their temporary places of refuge were filled with water. 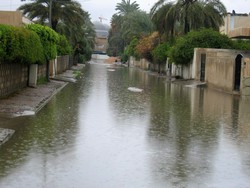 But the aid was delayed by several days because the charity’s Baghdad offices and residences were not spared from the deluge. “We had to pump water out for three consecutive days,” ICRC spokesperson Ralph al-Hage told IRIN.

Other humanitarian efforts were obstructed too. “The flooding… created a problem of access,” Fabio Forgione, head of mission for Médecins Sans Frontières, told IRIN. “We could hardly work in the districts located between Baghdad and Anbar, in Abu Ghraib.”

MSF can now get around again, but remains on guard as the wet season has only just begun.

To make matters worse, Iraq is also grappling with a cholera outbreak – more than 2,200 people have been infected -- which the flooding could exacerbate. UNICEF has expressed concern that “the disease could spread further due to recent torrential rains and ongoing insecurity.”

Others played down the threat. “[W]e don’t really think that this [flooding] will have huge consequences on the spreading of the cholera,” said Forgione. “I’m not saying the situation is under control, but the work that has been done so far has been quite effective.” MSF, the Word Health Organization and UNICEF are working alongside the Ministry of Health to curb the outbreak.

Forgione described these stark weather highs and lows as a “huge concern” for MSF. “This has a huge impact on the condition of the IDPs… infections [and] cases of diarrhoea can be quite frequent because of exposure to extreme temperatures.”

It’s already bitterly cold in the north. Freezing weather and snow are around the corner in Kurdistan, where around 250,000 Syrian refugees and close to one million displaced Iraqis have sought refuge.

The mountainous Kurdish province of Duhok, which has particularly bad winters, hosts approximately 427,000 displaced Iraqis. Although they’re not all living in tents, thousands are sleeping in unfinished buildings, without windows or doors to protect them from the icy conditions.

As one aid worker put it: “Iraqis have suffered an extremely difficult summer… As for winter, this is just the beginning.”