After living under the rule of the so-called Islamic State for more than a year, Khalil al-Abbassi knew he had to get out. But he was also well aware that leaving his home in Mosul in northern Iraq wouldn't be easy or cheap.

This August, 25-year-old Abbassi coughed up $1,000 in kickbacks and another $800 for a taxi to Baghdad, becoming one of the 3.2 million Iraqis displaced by the violence in their country, some of whom are paying extortionate sums of money just to leave home and escape IS occupation.

“We couldn't take life under IS anymore,” Abbassi, a Sunni former businessman told IRIN. “I knew how impossible it was to leave Mosul, but I found a loophole and bribed people who collaborate with IS to get out.”

See: The Tragedy of Iraq’s Sunnis

In June 2014, IS declared a caliphate in the territories it already controlled in Iraq and Syria and swiftly seized the Iraqi cities of Tikrit and Mosul, leaving a wave of displacement in its wake. It has since lost Tikrit to the Iraqi government, but retains Mosul and much of western Anbar province, including the provincial capital Ramadi.

Those living under IS control often do so as de facto prisoners and need to give over much of their wealth as a kind of departure tax if they want to leave.

There is no set system and the stories of those paying for their freedom vary: some slip cash to smugglers, others hand it over to militants of various stripes at checkpoints. Many gave their hard-earned money directly to IS for official or unofficial exit permission.

Abbassi’s $1,000 went towards a document confirming his mother’s chronic illness, allowing the family leave for treatment. He attempted to obtain this proof by legitimate means, but found currency more convincing.

“It was hard to persuade IS with my mum’s [medical] reports,” he said. “That’s why we agreed to a bribe.”

Others pay smugglers who specialise in these types of covert and complex operations. Hasan al-Najmawi, for example, paid $2,500 for a five-leg car journey away from what he called the “nightmare” of Mosul.

There was a cheaper option, the 34-year-old former electoral commission employee told IRIN. “A friend of mine introduced me to a smuggler who offered to hide me inside the goods in his truck for $1,000.”

But the pricier smuggler was known to work with IS, so Najmawi dug deeper into his pockets for what he deemed a safer choice. He was still afraid as he was smuggled out. “I took a deep breath and looked at the sky whenever we approached an IS checkpoint,” he said.

IDPs feeling Ramadi in Anbar receiving aid from NRC at Bzeibiz bridge border point outside of Baghdad. May 20, 2015 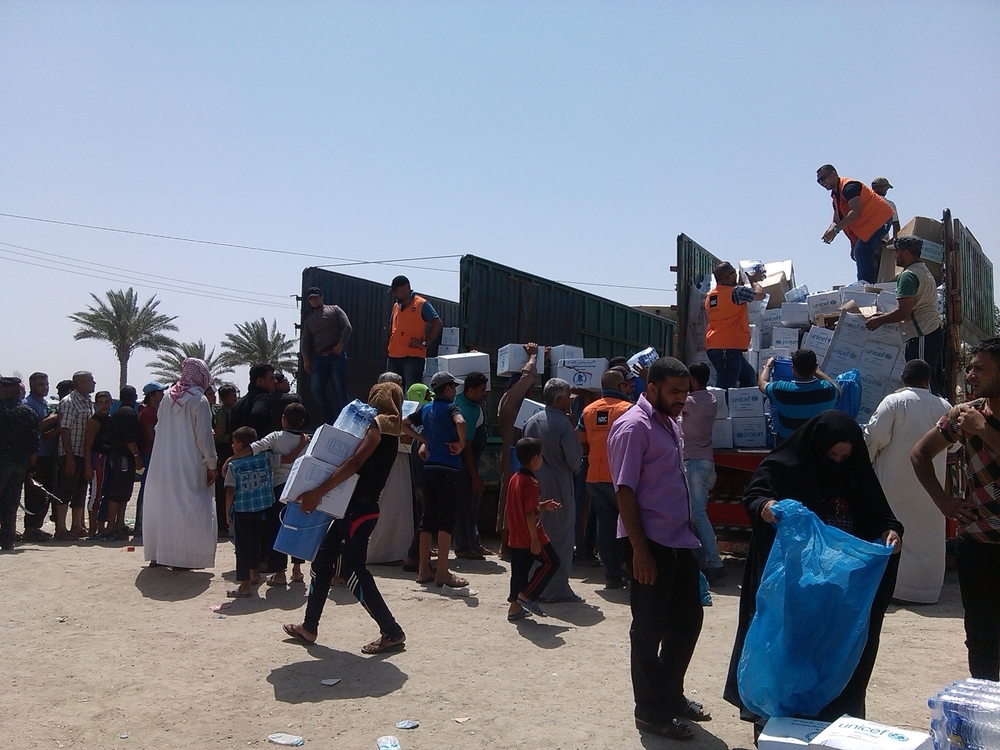 Ali Bibi, a spokesman for the UNHCR, said the UN’s refugee agency is well aware of the pay-to-go phenomenon and receives such reports on a weekly basis.

UNHCR can’t confirm how widespread it is but “has a general picture that this is going on, and it’s going on frequently,” he told IRIN.

Local charities are also concerned. Sheikh Ismael al-Hadidi, a former member of Iraq’s parliament now heads Baytuna (“our home”), an organisation that aids those displaced in the northern city of Kirkuk.

“Unfortunately people have to bribe security personnel to let them cross the checkpoints,” Hadidi told IRIN. “Otherwise you might get stuck in the desert.”

But it’s not just the cost of leaving that is worrisome, Hadidi pointed out. “[Life as an IDP] is expensive for people who have been sitting at home without jobs or salaries.”

A recent survey found that 17 percent of internally displaced Iraqis who aren’t living in camps have no form of income whatsoever, and another 44 percent rely on unstable seasonable labour. The majority said finding enough food is a major concern.

“If they [IDPs] are able to get out [of ISIS territory], they come with depleted resources,” said UNCHR’s Bibi. “As the conflict continues, the strain on all IDPs is becoming more and more severe as savings and resources are depleted and they have to rely more on humanitarian assistance and help from the government.”

Bibi said more IDPs are asking to move from rented accommodations into camps because they simply can’t pay rent anymore.

The $1,800 Abbassi paid to leave Mosul represents more than a quarter (or three months) of the average Iraqi’s annual salary of $6,320.

While he’s glad to be living in the relative physical safety of Baghdad, Abbassi is now jobless.

“It is hard to afford a decent life for your family without financial resources,” he said. “Money is running out.”

“We don’t know what do to,” he continued, complaining about a lack of government aid – the distribution of which has been plagued by reports of corruption. “Our future is just unknown.”

Despite the hardships, all of the escapees from IS said they would do it again. Arkan al-Jubori, a 34-year-old government employee escaped Moqdadiya in eastern Iraq after IS blew through his town in July 2014.

When his brother was arrested as an alleged spy, Jubori recalled paying $3,000 to an IS collaborator for his release, as well as another $3,000 “for a person to help us escape the town.”

He borrowed money and sold his wife’s gold to afford the journey.

“I lost everything: job, home, friends, and childhood memories.”

His hometown is no longer under IS control, but Jubori won’t go home. “I still have the fear inside me,” he said.