Most of the 1,750 migrants to have drowned in the Mediterranean this year were sub-Saharan Africans who boarded smugglers’ boats in Libya. We will never know all their individual stories, but it is possible to retrace their steps through the deserts of Sudan, Chad and Niger to Libya’s porous southern borders, and north to its coastal cities and the beaches where the boats were launched.

Each stage of that journey is facilitated by smugglers, who have thrived amidst the conflict and turmoil that have gripped Libya since dictator Muammar Gaddafi was toppled in 2011.

Stéphane, 28, from Cameroon, looked surprised when asked how he entered from Niger: “How did we cross the border? We were four Africans. (The smugglers) asked us to jump in the trunk of the pick-up car and we drove from Madama (a border post in Niger) to Libya without any officials asking us for IDs. That's it.”

Libya’s southern border is largely controlled by the Tubu ethnic group (also known as Toubou or Tebu) who live in northern Chad and northeastern Niger as well as southern Libya. Tubu border guards receive a cut for each migrant convoy they admit.

The route through Niger is the main one used by West Africans, although many Malians also enter via Algeria, where the smuggling trade is controlled by the Tuaregs, another ethnic group.

The fee to be smuggled from West Africa to Libya via Niger is usually about $1,600, plus another $400 in payment to the Tubu at the border, according to several migrants IRIN spoke to.

Saving for the next stage

After crossing, the migrants are dropped off outside towns in Libya’s southwestern Fezzan region. “The cars never stop downtown, but a dozen kilometres away. We have to walk to the cities through the desert with no water or food in most cases,” said Stéphane.

After reaching towns, the exhausted and disoriented travellers find shared rooms to rent and spend their days at roundabouts and main roads trying to get casual labour jobs. Libyans often employ them to do low-paid work such as collecting rubbish and cooking.

The majority of the migrants only spend a few weeks or months in Sebha, Fezzan’s capital, or other cities in the region, in order to save enough money to continue to the northwestern coastal cities of Tripoli or Misrata. Transport north is usually organised by local Arab tribes, mainly the Ouled Slimane.

Stéphane insisted he would never do this, describing it as “foolishness.”

“If they go to the north, it is to take the boat (to Europe) and they will die in the sea,” he explained. “For myself, I just want to earn enough money and go back home to Cameroon. And Sebha is the best place. There are, perhaps, less job opportunities than in Tripoli, but Libyans from the south have a better behaviour with black people.”

At Al-Jaraba Street roundabout in downtown Tripoli, migrants have plenty of stories of mistreatment by employers.

“I was hired with another man to put tiles in the villa of a rich Libyan in the south of the city,” said Peter, a Ghanaian who has been living in the capital for more than a year. “He agreed to pay us 50 dinars (about $36) each. We finally got only half of it.”

For female migrants, working conditions are even more precarious. They are usually employed to do domestic work and stay in their employers’ homes.

Erina, a 25-year-old Cameroonian, was brought to a police station when the family she was working for decided they wanted to get rid of her. She spoke to IRIN from a dorm room in a detention centre for female migrants in Surnam, 70 kilometres west of Tripoli, where she has spent the last five months. The room smelt of a mixture of old food, urine and dirty blankets. “I can’t bear it anymore, I want to leave. I want them to send me home,” she begged.

Lieutenant Khaled Attumi, director of a detention centre for male migrants in Zawyia, 17 kilometres from Surman, admitted conditions were unsanitary and that detainees were suffering. He blamed the Tripoli-based government. “If it goes on like this, I will release all of the migrants,” he said.

Migrants who manage to avoid detention save their earnings until they have the roughly $2,000 needed to complete the final stage of their journey – taking a boat to Europe.

Khoms, Garabouli and Sabratha beaches, all on the northwest coast, are popular places for smugglers to launch boats, but Zuwara, where the smuggling trade is controlled by the long-marginalised Amazigh minority, is the most used.

When the weather is calm and the wind blows from the south, young migrant smugglers drive the 120-kilometre trip from Zuwara to Tripoli to collect their “shipment.”

“To avoid detection, they wait until the last moment to bring the migrants in taxis or mini-buses. The smugglers call their contacts in Tripoli to gather the migrants, at the most three days before the boat leaves,” said an Amazigh official from Zuwara who did not wish to be named.

"When the Italian coast guards pick up the migrants, they usually leave the boat. A few hours later, smugglers come in speedboats and collect it."

“For these young men, they just see it as easy money,” he said. “They bring the wooden boats from Egypt or Tunisia where they are built. It costs between $11,000 and $15,000 for each boat and it can be used again. When the Italian coast guards pick up the migrants, they usually leave the boat. A few hours later, smugglers come in speedboats and collect it.”

EU leaders at an emergency summit on migration in Brussels on Thursday discussed plans to capture and destroy smugglers’ boats. Italy, which is shouldering much of the burden of migrant arrivals, would like to go further and is pushing for a military operation to take out smuggling networks.

But the human smuggling trade in Libya does not have a hierarchical structure with one Mafia-style boss at the top who can be targeted. From the southern border to the beaches in the north, each smuggler has his own network. When migrants complete one stage of the journey, they are given phone numbers of partners in the network who can help them with the next stage.

Armed groups across North Africa and the Sahel are profiting from the increasingly lucrative migrant smuggling trade, but neither Libya Dawn, an alliance of militias controlling most of the western coastal cities, nor Islamic State, the other major force in the area, are involved in the business as they are unable to control the entire chain from south to north.

Jamal Zubia, a spokesperson for the group controlling Tripoli, the rival to Libya’s internationally-recognised government, expressed a willingness to work with Europe to deal with the migration crisis if the Europeans are actually prepared to help.

"The EU wants to sit on a sofa and watch Libyans work to secure Europe from the flood of illegal migration,” he told IRIN. “They need to sit with us and make a strategy to tackle it together. We cannot afford it ourselves."

A migrant boat captured by Tripoli's Maritime Force in Libya 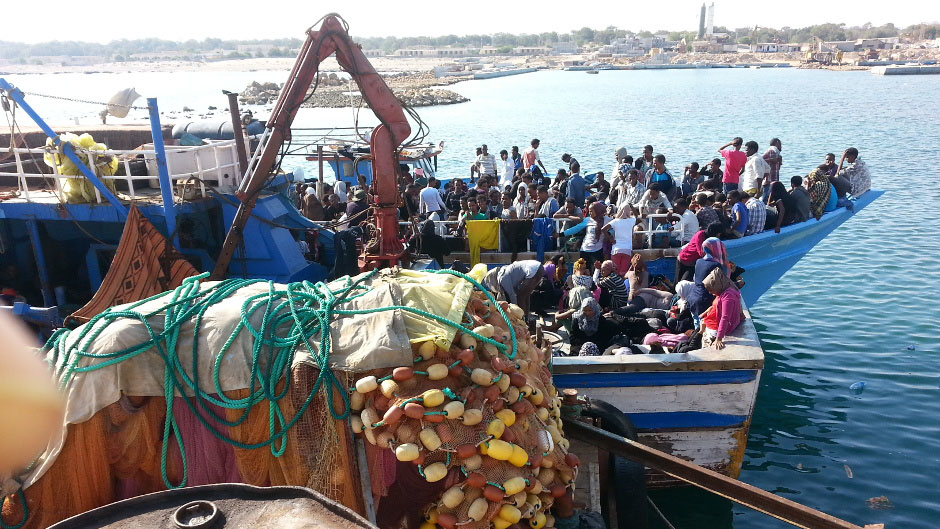 Bishr's team has been unable to patrol since 18 January because its largest boat – a mere 10 metres long – is broken.

In order to stop what Bishr calls “the death trips,” the unit needs at least three patrol boats as well as spares to fix them when required.

“I asked the government but they don't take the issue seriously, so we need help from the international community.”