On a crisp Ramallah evening, much of the city appears to be tucked inside the city’s cafes sipping hot tea. But 20 runners are shaking off the chill and loosening up for one of their last jaunts before the third annual Palestine Marathon.

On Friday, the Ramallah team and this writer will join some 3,000 others at Jesus’ birthplace, Manger Square in Bethlehem. We’ll make our way through two refugee camps, past a checkpoint and alongside part of the imposing concrete wall that separates Israel from the West Bank, in a 42-kilometer test of both physical and mental resilience in the Occupied Palestinian Territory.

The Palestine Marathon and its founding organization, Right to Movement, have their humble beginnings with George Zeidan, a resident of Jerusalem’s Old City. The 25-year-old began hitting the streets four years ago to stay in shape and got hooked.

A friend thought she’d like to run too, but wasn’t sure how her parents would feel about her setting off alone. So they formed a group, and it sprouted quickly.

“People were asking to join us because it was a relief,” Zeidan told IRIN. “It’s something they look forward to because they are so restricted in terms of the occupation. How many places do we have to run? It’s kind of a little jail, a prison.”

And so the Right to Movement organization was born: its slogan: “we run to tell a different story.” Groups of runners of varying abilities, religions, and political opinions popped up in Jerusalem, Ramallah, and overseas. Eventually, Zeidan and some Danish colleagues set up the inaugural Palestine Marathon in 2013. 700 people took part.

I happened upon the race a few months ago. My own running career began and ended with an elementary school 5km, plus mandatory attendance as a cheerleader at my mother’s four marathons. I remember finish lines as bloody toes, space blankets, carbohydrate-filled bagels and exhaustion.

But in a flight of what has since often seemed to be foolishness, I thought it best to see for myself. So I signed up for the 10km. That’s the shortest distance the race offers. 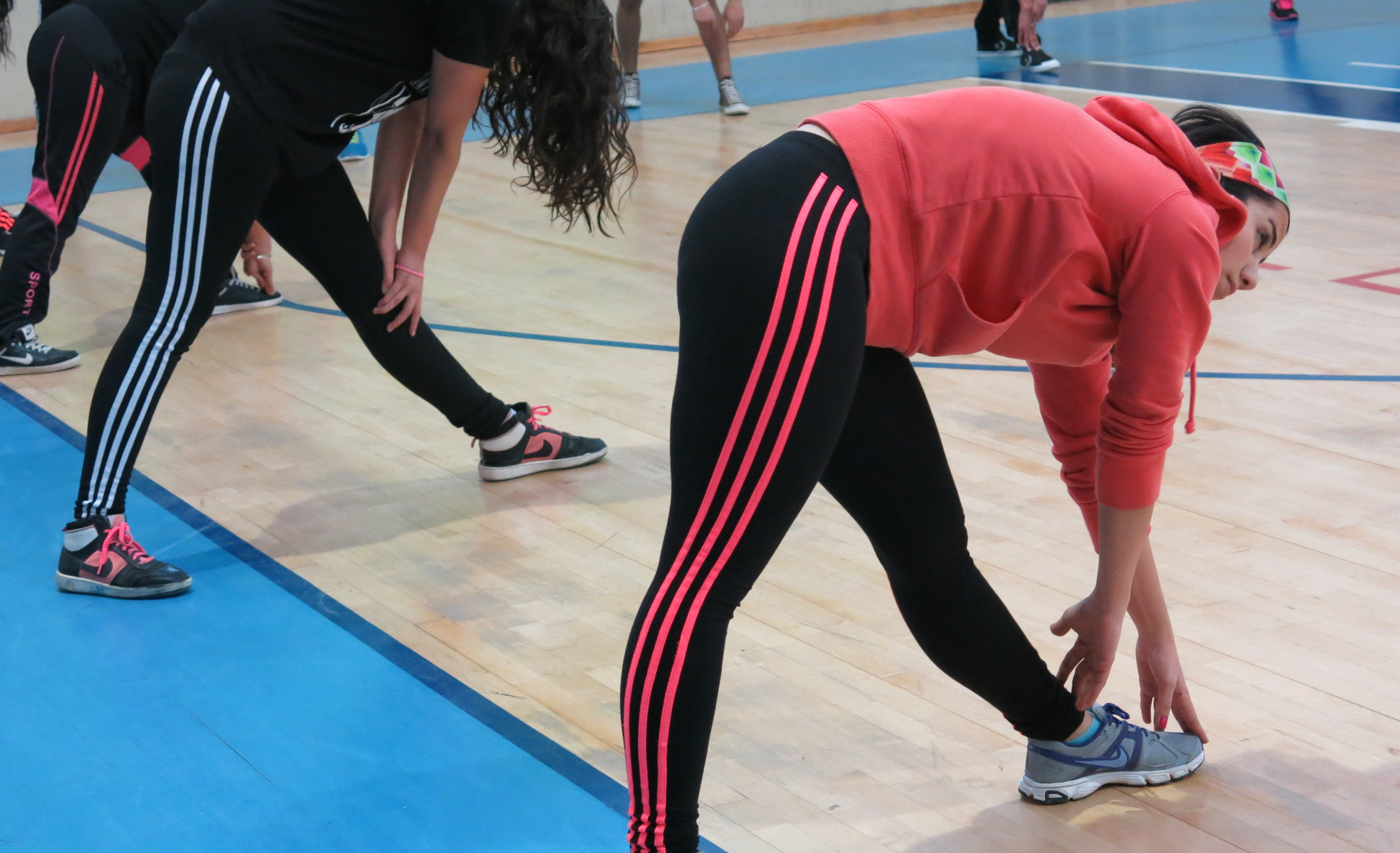 To ensure I didn’t back out, I informed my mother. She’ll turn 60 in the spring, and is training to run the full distance once again. She was thrilled until I quietly mentioned the race is inside Occupied Palestinian Territory, at which point I was subjected to a heavy dose of maternal concern.

Tarek Salfity, the marathon’s 25-year-old dentist-cum-volunteer director, says countering this type of skepticism about the safety of life in a Palestinian city is part of the race’s mission.

Prepping for a race in Bethlehem has its challenges. The course will come close to a military checkpoint, so the Israeli Defence Forces have to be informed. Certain parts of the course have been prone to clashes between Palestinians and Israeli security forces in the past, so there’s that to worry about too. Yet Salfity is keen to project a different image.

“Our message is we can have an internationally recognized event here,” he explained recently, unruffled after an early morning Jerusalem run. “The idea is that when people think of this part of the world they think of war,” says Salfity. “But the idea of the marathon is to show it is safe…there will be a sense of normalcy.”

But the situation in the West Bank and Gaza, which Israel seized in the 1967 Arab-Israeli War, is anything but normal.

Entry and exit to Israel from the territories is administered by COGAT (Coordinator of Government Activities in the Territories), a unit of the Israeli Army.  The territories are only connected by Israeli soil.

Most Palestinians from the West Bank, like Diala Isid, head of the Ramallah Right to Movement group, can live and move freely in some 40 percent of the territory.  The rest is under Israeli control. They need special permission to work inside Israel, or to enter Jerusalem.

Palestinians with East Jerusalem identity documents, like Salfity, can travel back and forth between the West Bank, Jerusalem, and Israel proper, but they aren’t Israeli citizens.

And those from Gaza, like Palestinian Olympian Nadr al-Masri, can almost never leave the 360 square kilometre strip. According to Eitan Diamond, executive director of Gisha, an Israeli organization that advocates for Palestinian freedom of movement, “the rule basically, is that there is no movement.”

With a few exceptions – including humanitarian emergencies, some sports teams and some businessmen –“you can’t cross” from Gaza into Israel, he says.

Last year, Israel denied al-Masri a permit to visit Bethlehem for the race. But Gisha, which represents him legally, expects he will be allowed to attend Friday.

Even if he is allowed out, Diamond thinks Israel is “solving the illustration of the problem but not the problem it illustrates.”

The split has both economic and personal consequences – Gisha estimates that some 25 percent of Gazans have relatives in the West Bank.

Diamond sees the marathon as a tool to raise awareness of the division. “The restriction is part of a policy that is a separation policy, and one of the objectives is to create a separation between Gaza and the West Bank, and cut the ties between the two parts of the Palestinian territory, undermining economic ties but also social, cultural and family ties.”

A map of the Ramallah marathon 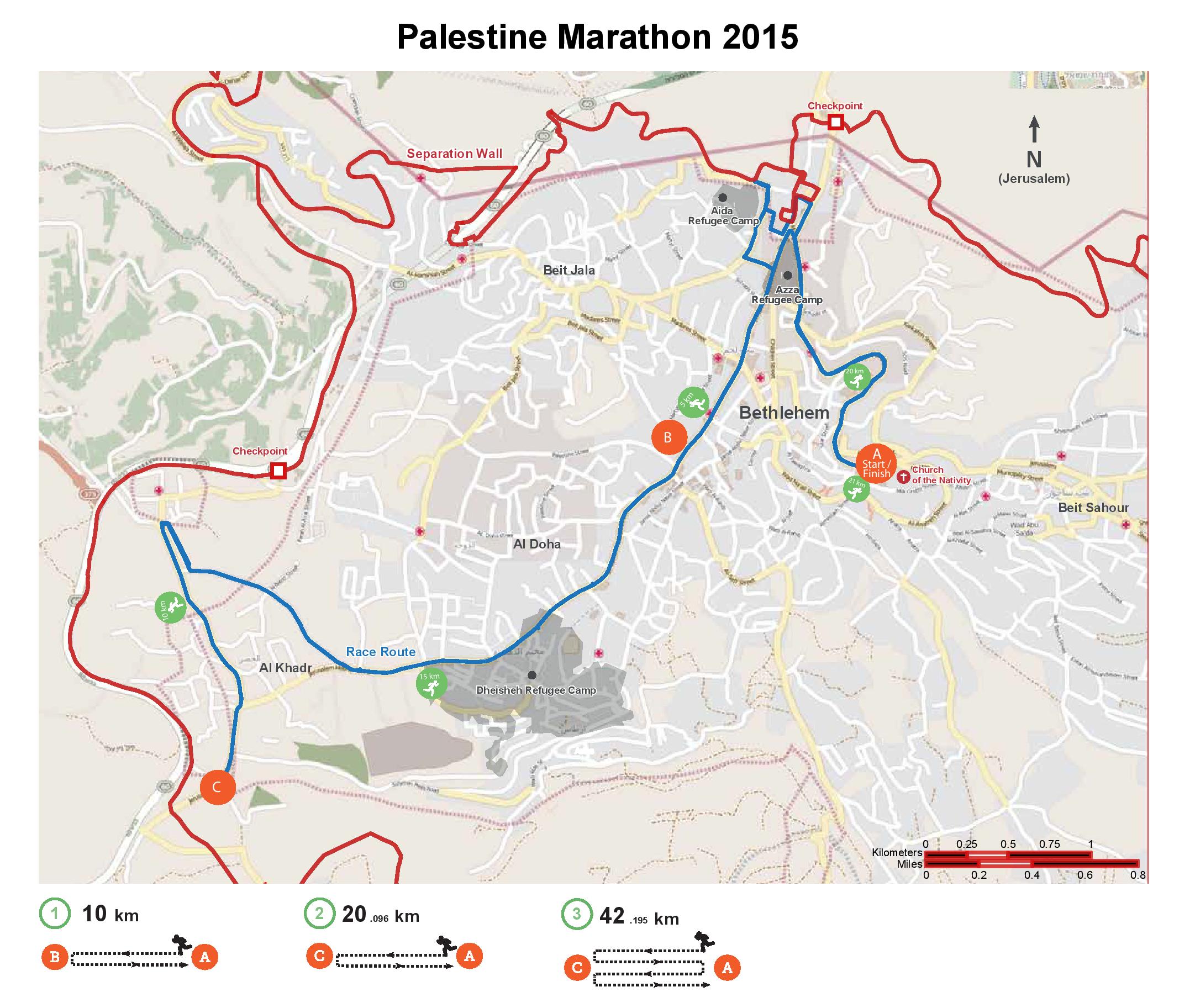 The concrete wall that splits the West Bank and East Jerusalem from Israel has for many come to exemplify the restrictions on Palestinian movement, as well as the Israeli-Palestinian conflict and the diminishing prospects for peace.

Israeli officials say the barrier, which runs some 250 km, has done its job – saying attacks within Israel from West Bank residents have declined by ninety percent since construction began on the wall in 2003.

Critics say it is a land grab, weaving inside Palestinian land.

There’s no doubt it is imposing, 8 meters high in some places, and impossible to miss on my way from Jerusalem to join the Ramallah runners. On the way back through the checkpoint – little more than an annoyance for someone with an American passport but far more for my fellow travellers – I notice that fruit sellers have set up shop before the turnstiles and metal detectors.

Out of the norm

I learned to run slowly. In the winter I developed a hatred of the treadmill, in the spring a hatred of running outdoors - until finally I conquered my first non-stop 5 kilometres. Still, I confessed my skepticism about the running project to Nadine Abu Rmeileh, who runs in Jerusalem.

“I’m a newbie,” the 23-year-old nutritionist from Beit Hanina promised, although she’s been at it for a year.  I chose the right confidante: “Sometimes I ask why I am doing this to myself?” she said. “But what keeps me going is after the run I feel accomplished when I see progress."

And she and other women athletes are busting stereotypes about religious women. "I do not wear the hijab inside [the gym]," she tells me. "When I finally put it on [after her workout - she favours zumba and yoga] they say: 'Oh, we didn't expect you to wear the hijab.'"

“I do get some looks while I’m running,” she continued. “I guess they are thinking ‘what is she doing, is she serious?’ But I keep running nevertheless.” Last year 30 percent of the racers were women.

In Ramallah, during training, it is cold and my ears ache every time I move. I don't know the city, the terrain or the runners. But the warm-up is rousing so I head off with the regulars, lucky that Diala Isid, the organizer, has an ankle injury so I had some slower company, at least as long as I can keep up.

An architect, she used to work in Jerusalem until the authorities failed to renew her permit to enter the city.

We run in the streets, past olive trees and up far too many slopes for my taste – Ramallah lives up to its Aramaic origins as “God’s Hill.” I shiver and sweat at the same time, my knee hurts, and the faster runners passed me multiple times. I think I am enjoying myself.

I send my mum a picture on a walking break. Since I’ve started running, we’re talking less about her safety concerns and more about mileage. She even mentioned – albeit briefly – that she’d like to run the race with me.

On the top of a particularly painful incline, Diala points out some lights. “From here you can see Jaffa.” I’ve been there multiple times. She can’t go.

But on Friday, through the refugee camps, under the wall and what’s forecasted to be a hot sun, we’ll both run, and I might walk a little. Even Zeidan, the founder who is busy with last-minute organization, will forget his worries and go for his fifth marathon. “I’m just going to put my shoes on and run.”