The needs of stricken communities are becoming evident in northern Mozambique and the Comoros islands in the wake of Cyclone Kenneth, with at least 45,000 homes destroyed and residents in remote rural areas urgently requiring food, water, shelter, and electricity.

At least 38 people died in Mozambique where many rural communities in Cabo Delgado province remain cut off after roads and bridges were washed away, according to the government.

The UN’s World Food Programme flew some supplies to Mozambique’s Ibo island on Monday, but aid efforts were being hampered by continuing rains. The island and the mainland area of Quissanga were in urgent need of assistance, according to the Mozambican government. Nearly 24,000 people have been forced into temporary shelters across eight hardest-hit districts.

Boreholes in Ibo island have also been contaminated, heightening concerns for waterborne diseases. Electricity and phone communications were still down for many, while at least five health facilities were damaged, and crops destroyed ahead of the harvest.

Most of the Comoros, where at least four people have died, have been without power since the storm damaged the island group’s electricity grid on Thursday, according to the UN’s emergency aid coordination body, OCHA. Crops, schools, and water tanks have been ruined, with more than 14,500 people displaced.

“The situation is desperate,” said Matthew Carter, a spokesman for the International Federation of Red Cross and Red Crescent Societies. “Mozambique risks a major humanitarian catastrophe if the floodwaters continue to rise. People are wading through waist-high water. Many have arrived in accommodation shelters with the very few belongings they could carry.”

Kenneth came ashore with 220 kilometre-per-hour winds – the strength of a Category 4 hurricane.

It hit just six weeks after central parts of Mozambique were devastated by Cyclone Idai, which killed an estimated 1,000 people in the region and left hundreds of thousands homeless. Crops were also destroyed, creating food shortages in rural farming areas. The World Bank estimated that Mozambique, Malawi, and Zimbabwe would need some $2 billion to recover from Idai alone.

Tommy Trenchard, a journalist and photographer based in South Africa, has been in Mozambique for three weeks covering the destruction from the storms and talking to those affected.

In the town of Macomia, about 40 kilometres inland from the coast in the Cabo Delgado region of northern Mozambique, he found houses ripped apart by Cyclone Kenneth and scenes of chaos. Residents were trying to salvage what they could from the wreckage, some fashioning improvised shelters from sheets of twisted roofing panels.

“Nothing can prepare you for witnessing something like this. And there are no words to express it,” said Ajira Abu Jade, a 45-year-old farmer whose house was crushed by falling palm trees as the storm passed through.

After making landfall, the cyclone was downgraded to a tropical depression, but it then stalled around the region of Pemba, leading to torrential rainfall.

On Sunday, residents of Pemba woke to find streets turned to rivers, with some parts submerged by up to five feet of water. The area is set to receive several more days of heavy rain, posing the danger that rivers could burst their banks, causing major new floods. 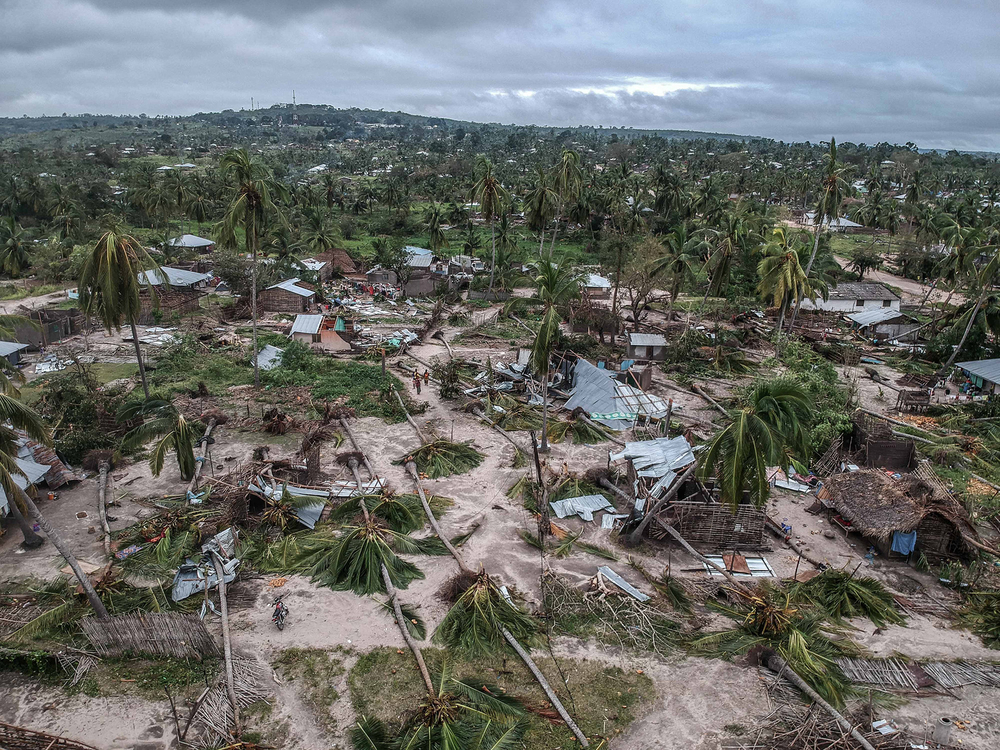 Fallen palm trees and destroyed homes dot the landscape in the village of Macomia, which was hit hard by Cyclone Kenneth. Hundreds of homes have been damaged or reduced to rubble.

“I don’t even know how long it will take to recover from this,” said one resident, a 47-year-old teaching assistant whose house was badly damaged in the storm. “Just rebuilding the house will take years.” 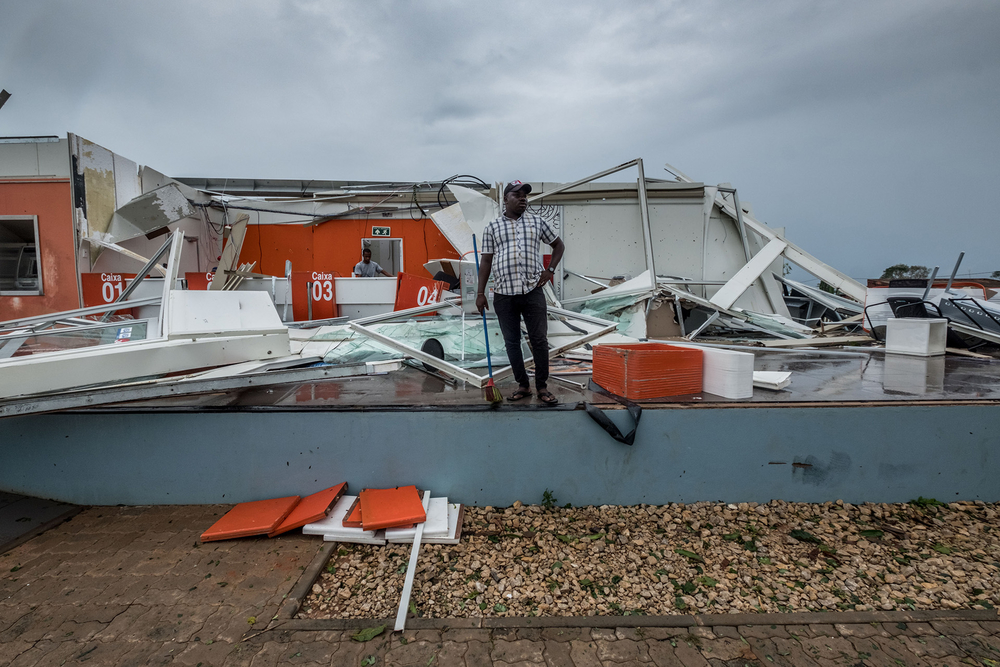 A man holds a broom as he stands in the remains of a wrecked bank in Macomia. It is too early to estimate the economic impact of the storm on the local economy. Cabo Delgado province is among the poorest in the country, with most families living below the poverty line. Cyclone Idai is estimated to have cost Mozambique close to $1 billion in damage – almost 10 percent of the country’s GDP. 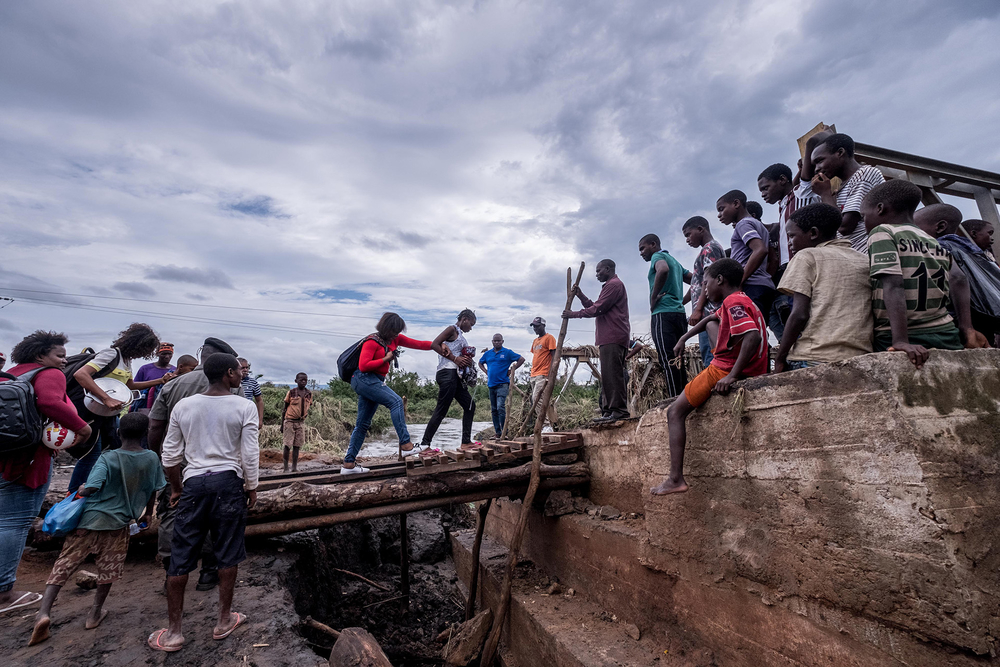 People use a makeshift wooden bridge to cross a river after the main highway bridge was knocked out by flooding. One of the biggest challenges facing the emergency response is the difficulty of accessing the worst-hit areas. Ibo island and the coastal town of Quissanga, which were directly in the path of the storm, are still only accessible by air, though air transport has also been difficult due to the extreme weather conditions. 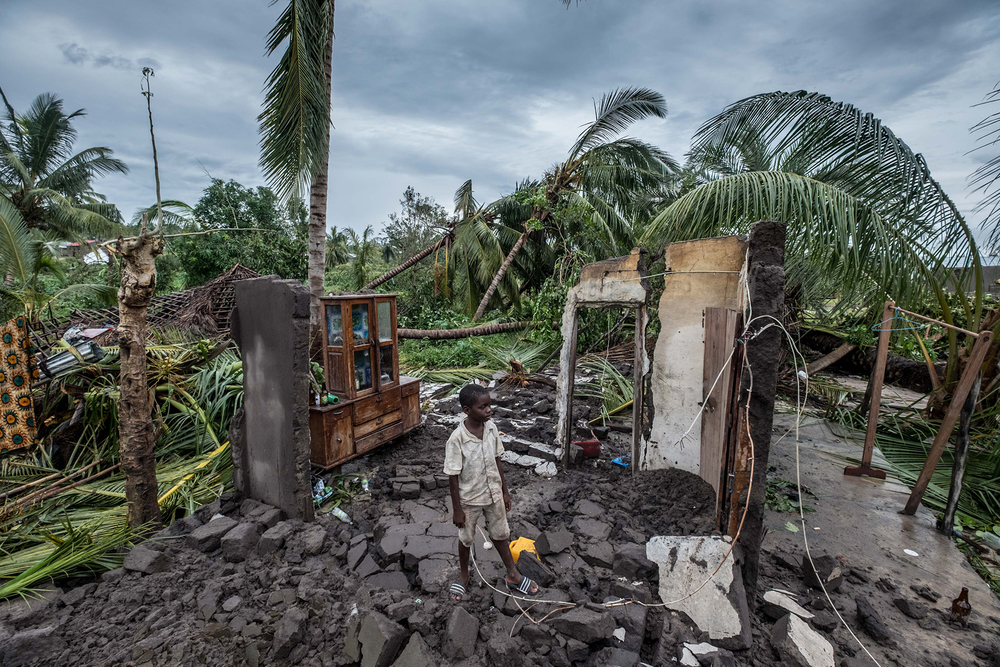 A boy looks out from inside a ruined house in Macomia, where many are sleeping rough with little shelter from the elements. Thousands more have been moved to temporary shelters by the government, where they are also receiving food and water. 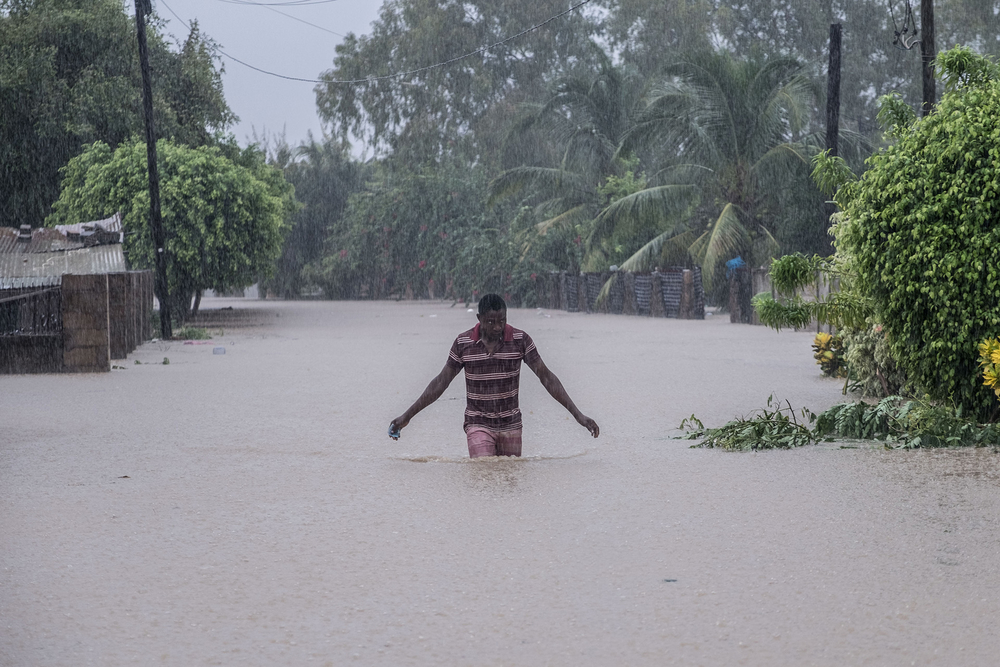 A man walks along an inundated street in the Wimbi neighbourhood of Pemba. Residents paddled boats from house to house, rescuing possessions from the rising waters. The flooding has revived concerns about the possibility of an outbreak of waterborne diseases, such as the cholera outbreak that followed Cyclone Idai in March. 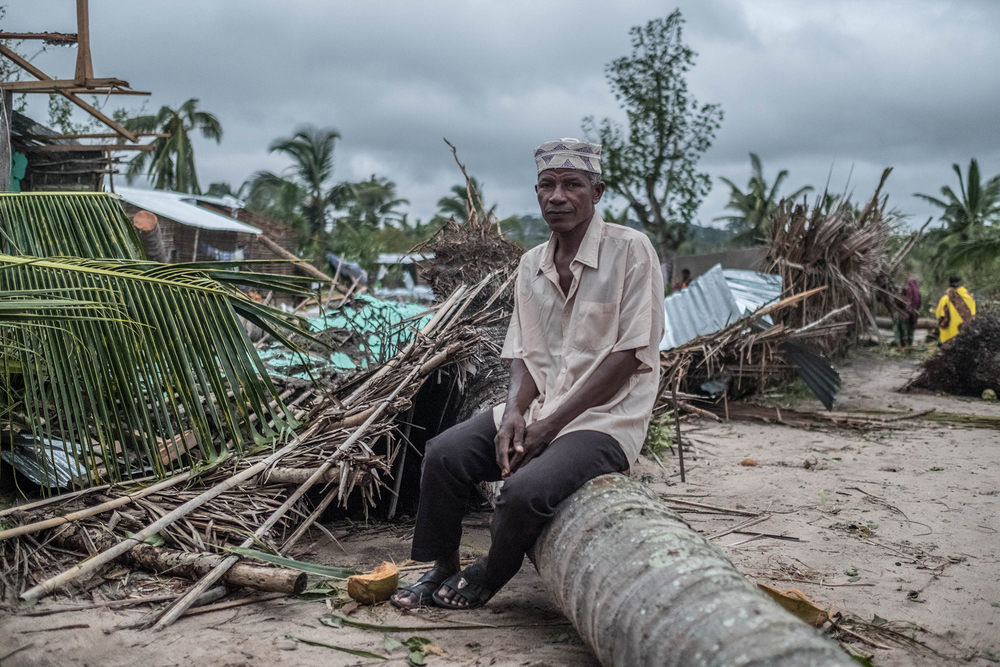 Ajira Abu Jade, pictured outside the remains of his family’s house in Macomia. Jade, a subsistence farmer who grows maize and cassava in his fields, said his crops have been wiped out.

“My fields were all destroyed by the storm. It will be very difficult to recover from this,” he said. “I have a family of 10 people to support and we have nothing to eat. It's going to be a very difficult time.” 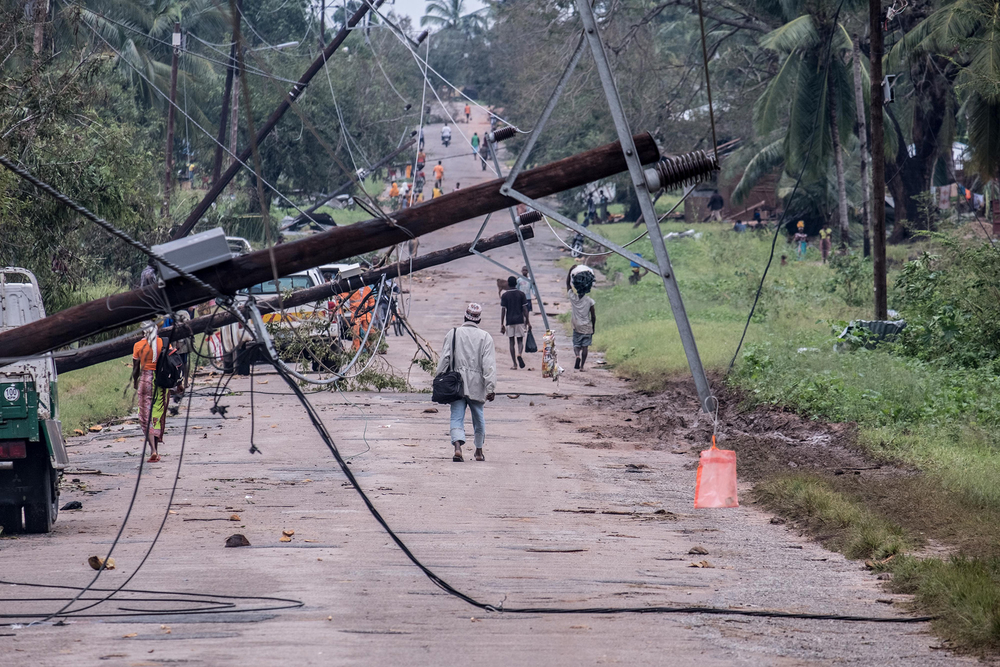 People walk along a road beneath fallen power lines in Macomia. The damage to infrastructure has been severe across Cabo Delgado province, further hampering relief efforts.

(TOP PHOTO: A girl walks across a bridge over a swollen river near Pemba. The government has warned communities living near certain waterways to evacuate to higher ground.)