Among the casualties of Cyclone Idai are the livelihoods of people such as Ernesto Ameral, a 26-year-old farmer in the small Mozambican town of Dombe, near the Mussapa River and not far from Zimbabwe.

Like many farmers in the region, Ameral was anxiously awaiting his harvest of onions, tomatoes and beans before the cyclone struck last month. Before the storm, he was able to provide enough food for his family. Now, his crops are still soggy with water and mud.

“I have never seen anything like that before,” he told photojournalist Brecht De Vleeschauwer, who travelled to Dombe, which was cut off from the outside world for a week after the storm. “Now, we will have to rely on aid.”

It will take months before his crops recover, he says. He’s dependent on aid from the World Food Programme and is living amid more than 1,000 people squeezed into tents erected by the Mozambican government.

Government figures estimate that some 715,000 hectares of crops were flooded or destroyed in all of Mozambique. More than 75,000 people in the Sofala province and Manica will soon receive agricultural kits containing mature seeds and equipment. Farmers in these two provinces alone produce approximately 25 percent of the national cereal output.

While more than 4,000 cases of cholera and seven deaths have been reported from the disease, health officials are also concerned about a rise in malaria due to the standing water. Health officials in the Dombe area say malaria cases are already climbing. 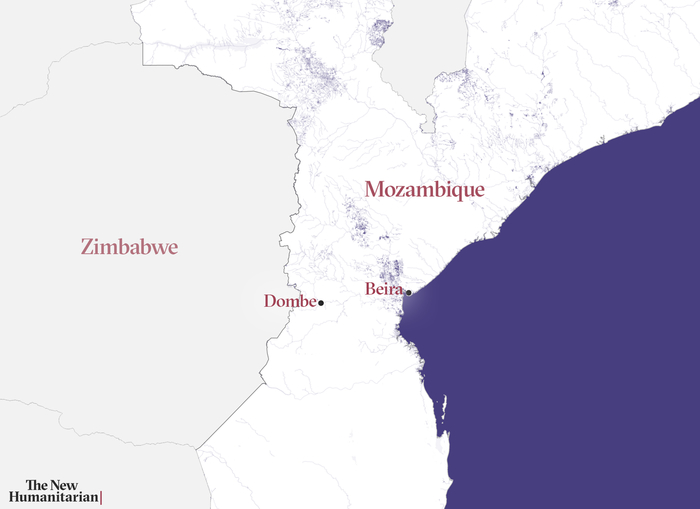 Ameral also worries about how he and his family will manage in temporary accommodation; he and other residents of flooded low-lying areas have been banned from returning home. More than 25,000 have been displaced in the Manica province. The area was hard hit because of flash flooding from the nearby rivers.

“We have been offered a small piece of land and a piece of plastic,” he said of the government assistance. “But we are (a family of) eight. There is no way we can all fit under this roof.”

Despite the government ban on returning to low-lying areas, she has gone back to her fields and house – both destroyed by the flood waters.

“In the camp there was nothing,” she said. “That's why we decided to return. Although most of our crops are rotten, we try to save what is possible. My husband is working in South Africa and I need to provide food for the family.”

Mozambique was the hardest hit country in the cyclone, with the port city of Beira to the east suffering considerable damage. In Dombe alone, some 165 people were killed and 50 are still missing. Some 1,000 people were killed regionally in Mozambique, Malawi and Zimbabwe.

The UN is seeking $282 million to fund emergency assistance over the next three months in Mozambique.

For now, Ameral is doing what he can: scouring the land searching for seeds to plant fresh crops. 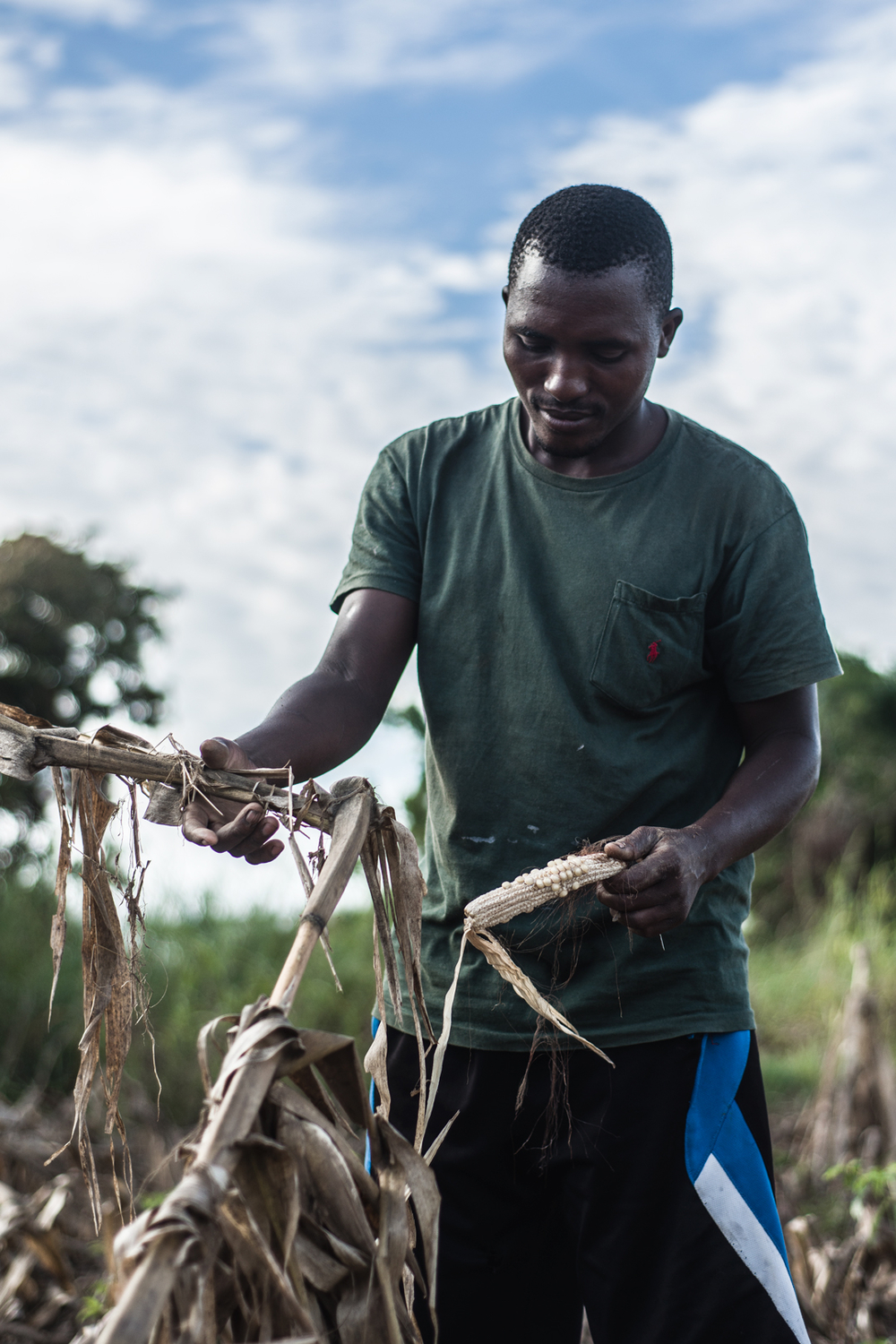 Ernesto Ameral, a 26-year-old farmer in Dombe, assesses his crops destroyed by Cyclone Idai. Before, he had enough food to feed his six children and wife, but now he relies on aid hand-outs. What little savings he had was also washed away in the raging flood waters, and he worries how his family will cope in the squeezed temporary accommodation at camps set up by the Mozambican government. The World Food Programme has been delivering food to the area that was cut off from the rest of the country for about a week after the storm, but farmers fear it will take months for crops to fully recover. 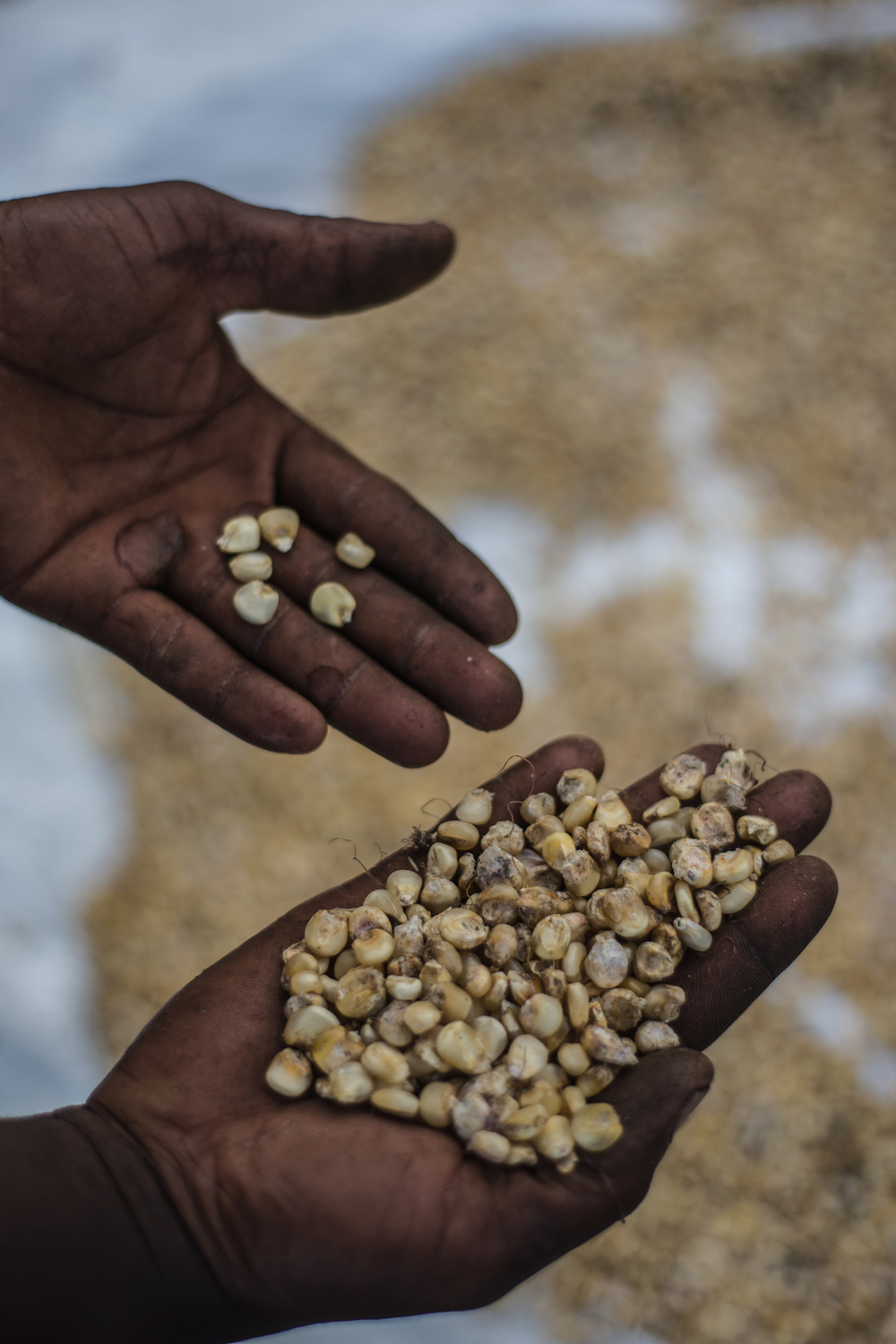 With flood waters receding, Ameral scours the land looking for seeds and kernels that he may use to plant fresh crops. If he can’t salvage enough from his own crops, he will turn to government help for fresh seeds. At the moment, he, his wife, and their six children are surviving on one meal of corn porridge a day. The United Nations has described Cyclone Idai as “one of the deadliest storms on record in the southern hemisphere.” More food aid is expected to reach the region in the coming week. 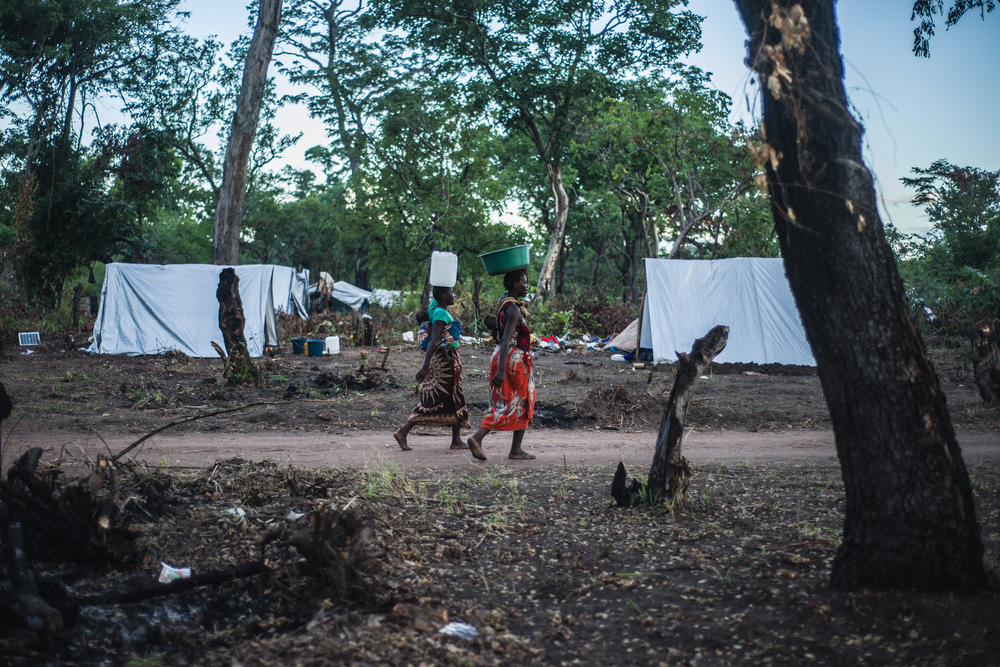 Two women make their way to tents and carry water from the distribution point. More than 1,000 people are living in temporary accommodation centres in the Dombe area. In Mozambique alone, more than 146,000 have been displaced and are in temporary shelters at 155 sites across four provinces. Some residents have turned to the government and relatives for money to rebuild their homes but fear help isn’t coming quick enough. An estimated 99,300 homes were destroyed. The government says nearly 2 million people are in need of aid. 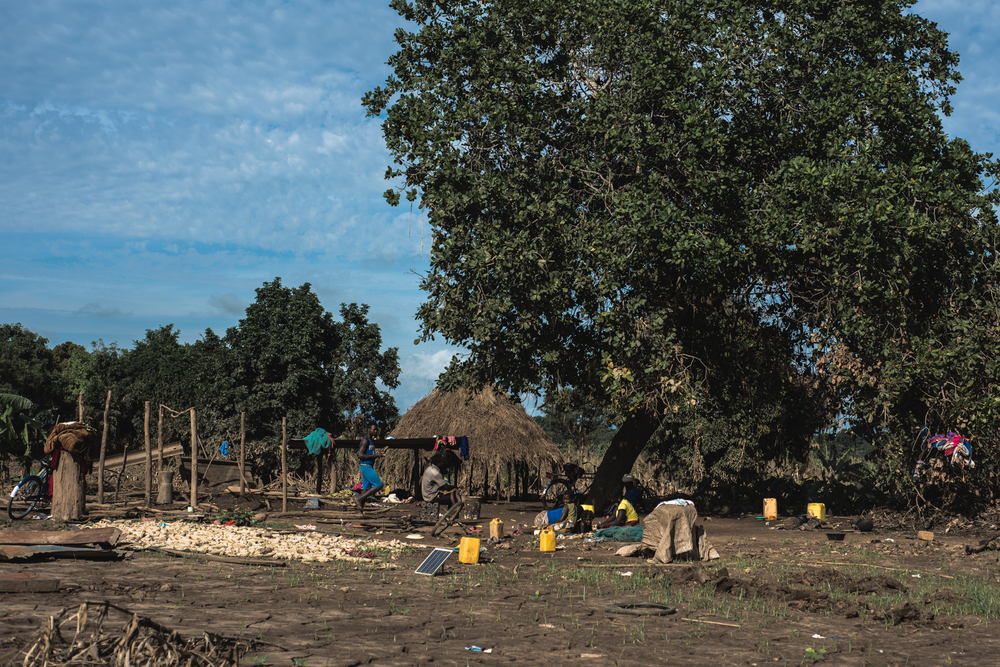 With many crowding into temporary shelters, health officials fear the spread of diseases. There have been more than 4,000 cases of cholera and seven reported deaths from the disease, mostly in the Beira area. In Dombe, meanwhile, standing water from the storm is increasing the chances for malaria, already prevalent in Mozambique. The damage to the country’s health infrastructure has challenged health officials in delivering life-saving medications for chronic diseases. 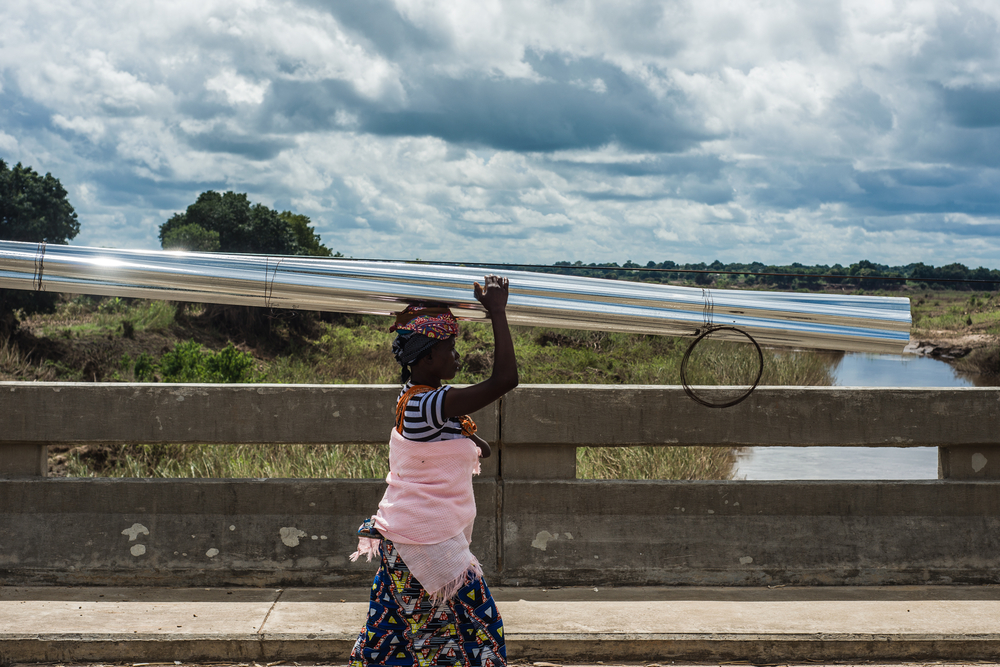 The government has banned residents of low-lying areas from returning home, but Roda Ernesto and her family chose to leave the camp anyway and return to their farmland. Now back at home, they are trying to save what is left of their corn crops. Her husband works in South Africa and she is responsible for providing food for the family. Some 165 people were killed in Dombe and another 50 are still missing. 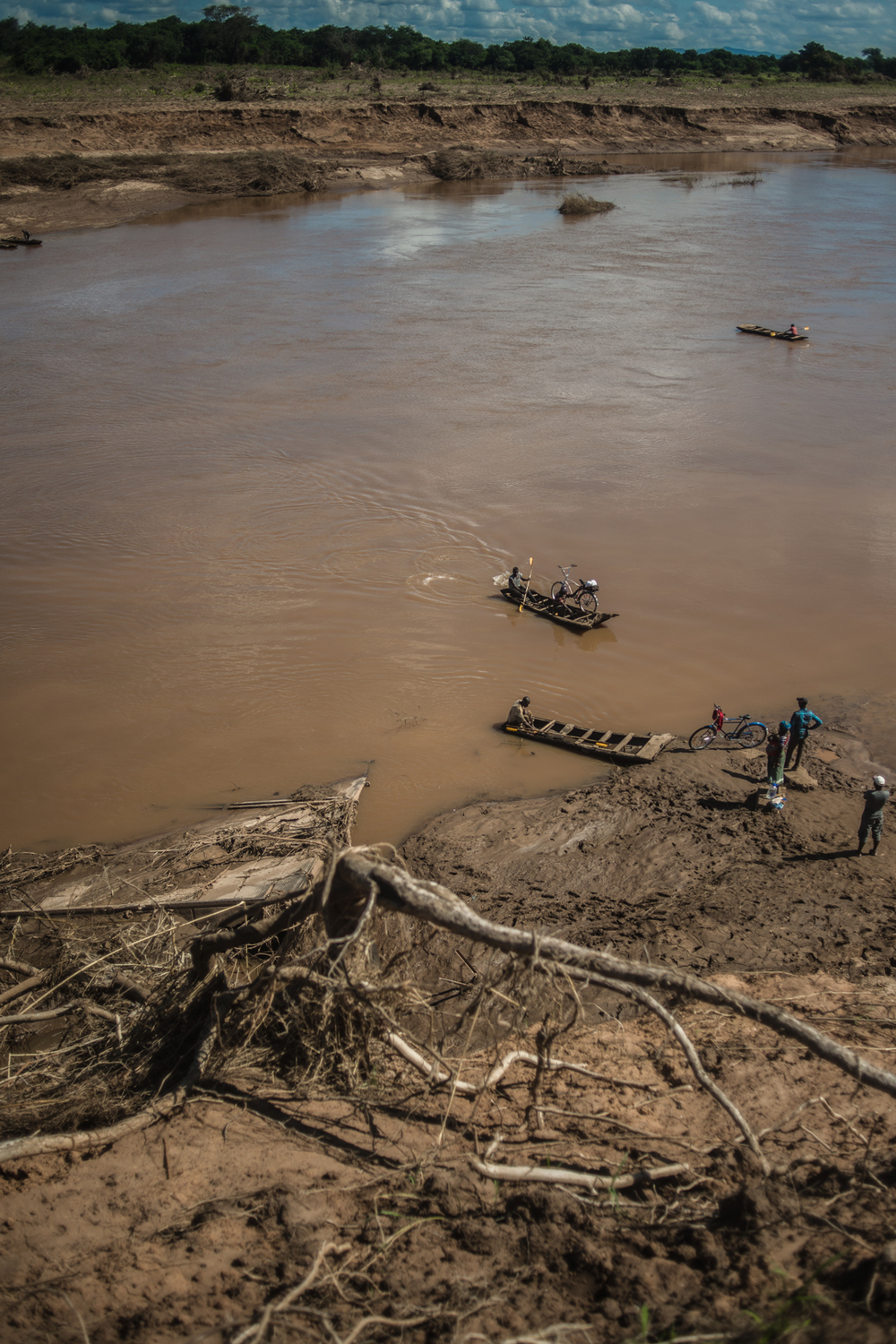 The farming area of Dombe was especially hard-hit because of the many waterways nearby, including the Mussapa River. The Buzi and the Pungue rivers burst their banks during the storm, Ameral recalled, adding that flood waters rose quickly and sent a torrent of water into the town. Some residents, he said, tried to take shelter in trees but many were swept away.