Donate
Second in two-part series on the 16 and 17 December massacre in Yumbi. The accompanying briefing looks in more detail at humanitarian needs.
YUMBI, Democratic Republic of Congo

For 48 hours in mid-December, the remote fishing and farming region of Yumbi some 400 kilometres north of Kinshasa on the banks of the Congo River became the scene of a massacre.

According to the UN Human Rights Office in the Democratic Republic of Congo, at least 535 people were killed in the town of Yumbi and surrounding villages when members of the Batende community attacked the Banunu, a different ethnic group.

More than two months later, entire villages are still deserted. Nearly 30,000 people remain displaced, many on islands along the Congo River, as well as in neighbouring Congo-Brazzaville.

The humanitarian needs are dire, and aid groups warn things could get worse.

Read more: Months after a massacre in Congo, little aid but plenty of fear

In January, photojournalist Alexis Huguet visited Yumbi to document the aftermath of the massacre, and found that tensions remain high between the two communities. Despite ongoing investigations into the massacre by the military prosecutor's office and the UN Human Rights Office, the attackers are still at large.

For the survivors, the trauma and violence of those 48 hours in December remain with them. As a result, many continue to live displaced, in difficult conditions, rather than return to destroyed homes. 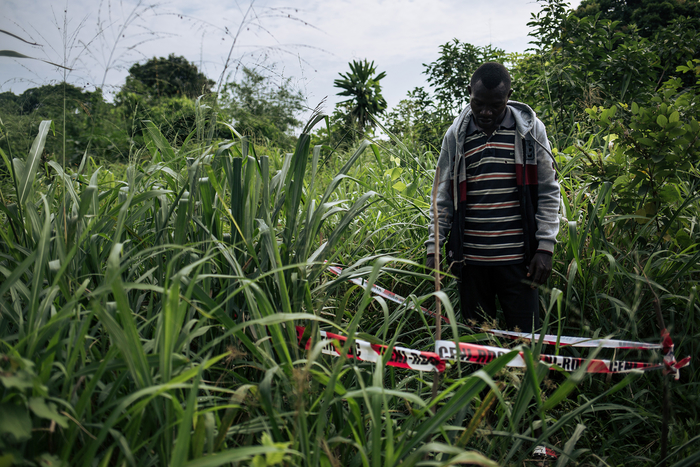 "We were both trying to escape,” said Lanjy Nguta (above), a survivor from the village of Bongende, standing beside the spot where his friend's body now lies, simply covered with dirt. “Instead of following the same path as me, my friend turned. In the meantime, the Batende arrived; they caught him and killed him.”

The UN says at least 339 people are confirmed to have been killed in Bongende on Monday, 17 December. Hundreds of bodies – burned, mutilated – littered the alleyways of the town. After 10 days, Congolese Red Cross teams finally arrived on the scene. For several days they dug mass graves to bury the bodies.

The UN Human Rights Office in Congo, which conducted an investigation in Yumbi territory in January, reported that it had found "more than 50 mass graves and individual graves", many of them in Bongende. 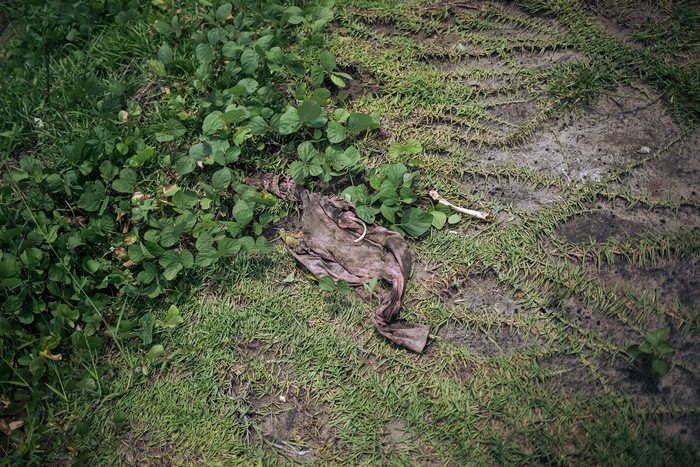 On 16 January, one month after the attacks, the Office of the United Nations High Commissioner for Human Rights in Geneva issued a press release reporting that 890 people were killed in Yumbi territory during two days in December. At the beginning of February, they returned to a figure of 535 documented cases of people killed.

But according to the testimonies of survivors recorded by IRIN, the bodies of a large number of people killed were thrown into the river. These are unlikely ever to be recovered and not included in the official count.

In Bongende and the town of Yumbi, there are still skeletons and human remains that have not been buried. In the photo above, you can see the clothes and bones of a child lying in the courtyard of a house in Bongende.

Two months after the killings, Bongende is still deserted. The inhabitants do not want to return, as their assailants are still at large, living in the surrounding villages. 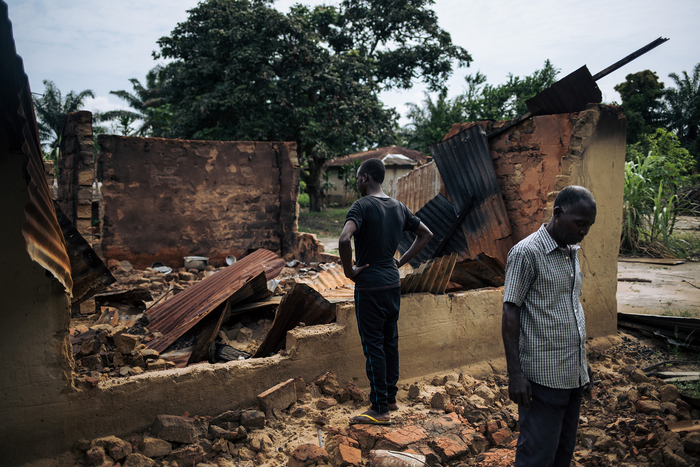 In Bongende, almost nothing is left, as the two returning Banunu survivors found above: destroyed houses, mass graves, human remains, a few naval soldiers guarding the port, and a deafening silence.

"It is important that the return of the population is not forced,” Nicholas Tessier, a psychologist who worked for Médecins Sans Frontières with both communities in Yumbi, told IRIN.

“If people return too quickly to their destroyed homes, or to the place where they have seen loved ones killed, it can really have an impact on their mental health,” he said. “They will have to face the consequences of recent violence and this will generate quite strong emotions, perhaps even a re-emergence of trauma symptoms.”

Surviving in the middle of the Congo River 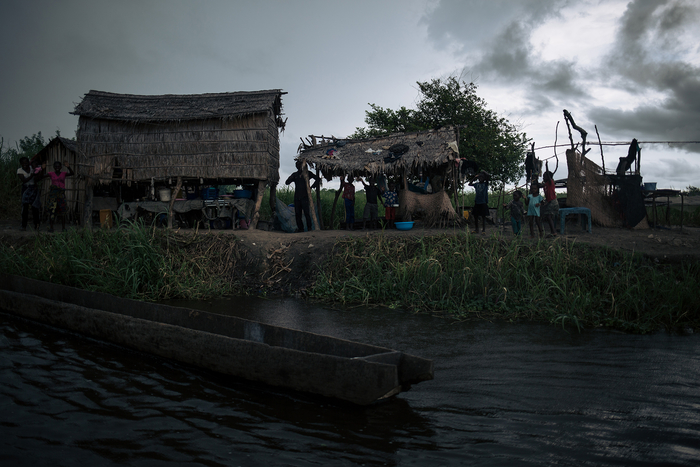 Opposite Yumbi, the Congo River is nearly 10 kilometres wide. From Yumbi, it takes almost an hour-and-a-half in a motorised canoe to get to this spot (above) on Moniende islet.

To escape the attacks in Yumbi, Bongende, and another village, Nkolo, thousands of Banunu made the journey to Moniende and other islets on canoes. Some paddled with their hands.

MSF said living conditions on the islets – which the villagers only usually inhabit during the fishing season when the river level drops – are particularly precarious.

They said their partially built huts do little to protect them from rain, the coldness of the night, or the wind, with malaria in the coming rainy season a particular concern. 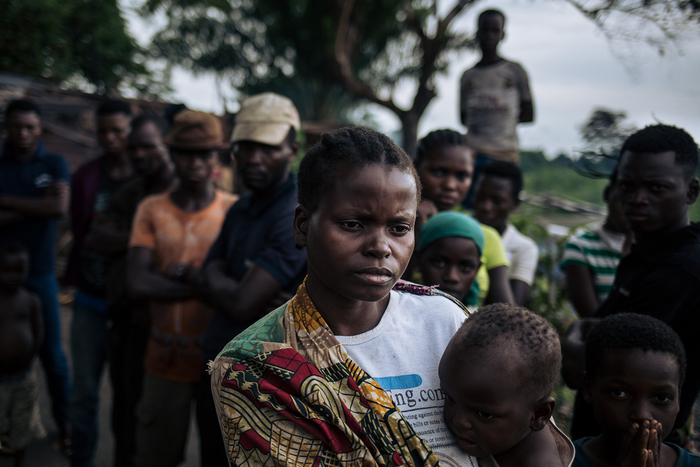 "I came across the attackers on my way home [in Yumbi town]. They shot me and hit me with arrows. I fell, and then they beat me up," said Abyssine Miniunga Bonkita, holding her child in her arms (above) on Moniende islet.

"One of the assailants wanted to leave, but the other wanted to shoot me again to finish me off once and for all,” Bonkita said. “Finally they gave up to save their ammunition and because they thought I was already dead. They also burned down my house. I dragged myself to where I found my relatives. When the clashes stopped, I was taken to the hospital."

Bonkita and her family then took refuge on Moniende islet, where they sleep piled up together in a hut made of plastic sheeting and wooden sticks.

Safety across the river 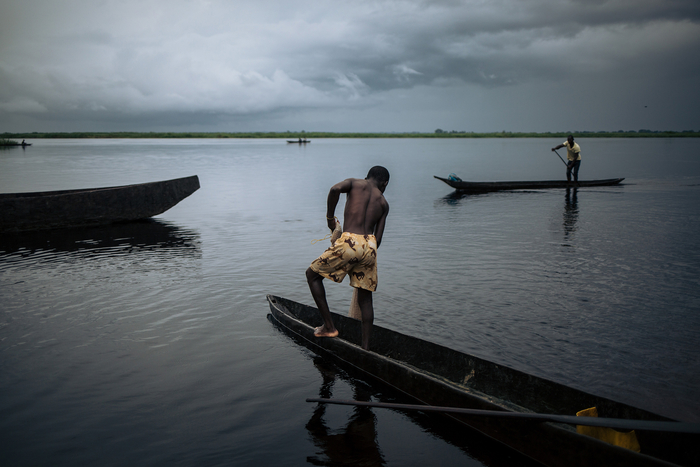 While many of the tens of thousands of displaced people took refuge on river islets around Yumbi, 16,000 of them crossed the river into Congo-Brazzaville. Most continue to live as refugees, largely in the Makotimpoko (pictured above) and Gamboma districts.

At the time of the massacre, the rest of the country was focused on preparations for Congo’s long-delayed general elections, which finally took place on 30 December. Not many knew what was happening in Yumbi.

After the first groups fled, bits of information began trickling in from Congo-Brazzaville: news of inter-communal clashes, dozens of people wounded, and thousands fleeing in canoes. 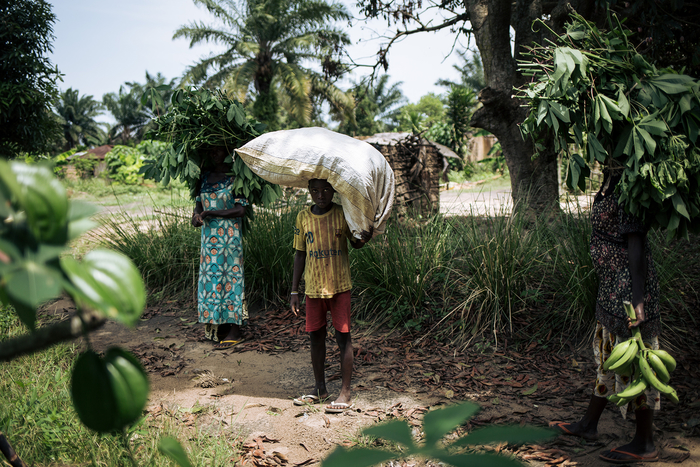 Young Limbanda Bompinda (centre) is one of the thousands who managed to escape the attack on Bongende for the safety of Congo-Brazzaville.

For those who took refuge across the river, local authorities say the needs are tremendous, including healthcare, shelter, food, and psychological support. But the area many fled to is landlocked, difficult to access, and the humanitarian response has therefore been slow.

Some refugees, like Bompinda and her mother, take the risk of crossing the river by canoe to collect food – including manioc leaves, plantain bananas, and safou fruits – before returning to Congo-Brazzaville. 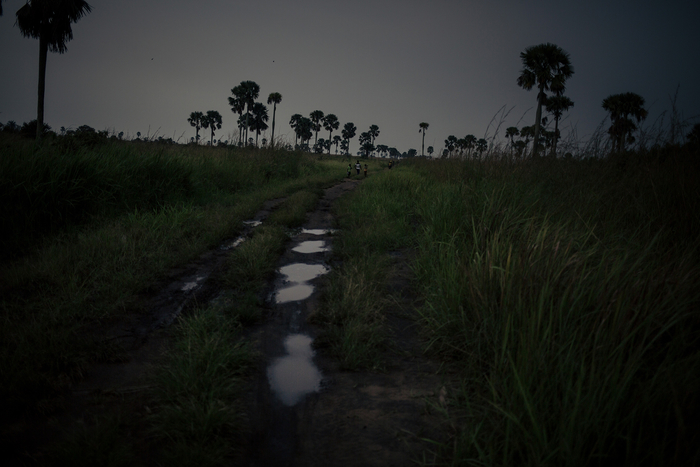 While almost all the casualties of the massacre were Banunu, the humanitarian crisis that has followed the attacks is affecting both communities.

Hundreds of Batende families – who, according to several witnesses, fled their homes in Yumbi in apparent anticipation of the killings – have also taken refuge in the surrounding forests and fields, leaving them vulnerable to disease.

(TOP PHOTO: A member of the Congolese naval forces walks along the deck of a boat on the Congo River weeks after the massacre in Yumbi. CREDIT: Alexis Huguet)