Over the past three years, around 200,000 Yemenis have fled their country, displaced by a continuing conflict that has led to more than 6,100 civilian deaths and left 22.2 million people in need of humanitarian assistance or protection.

Yet for tens of thousands of migrants escaping economic or political distress in Somalia and Ethiopia, Yemen remains a destination of choice, or at least a key transit point en route to the Gulf states.

Whether fleeing to or from Yemen via the Horn of Africa – more than 37,000 Yemenis travelled to Djibouti in 2017 – Yemenis and African migrants make similar treks. The Africans, though, rely on a smuggling network that takes them across some of the harshest terrain on the planet.

Journalist and photographer Benedict Moran visited Djibouti in February, meeting migrants travelling to Yemen – and often beyond – via the Red Sea, the Arabian Sea, and the Gulf of Aden. 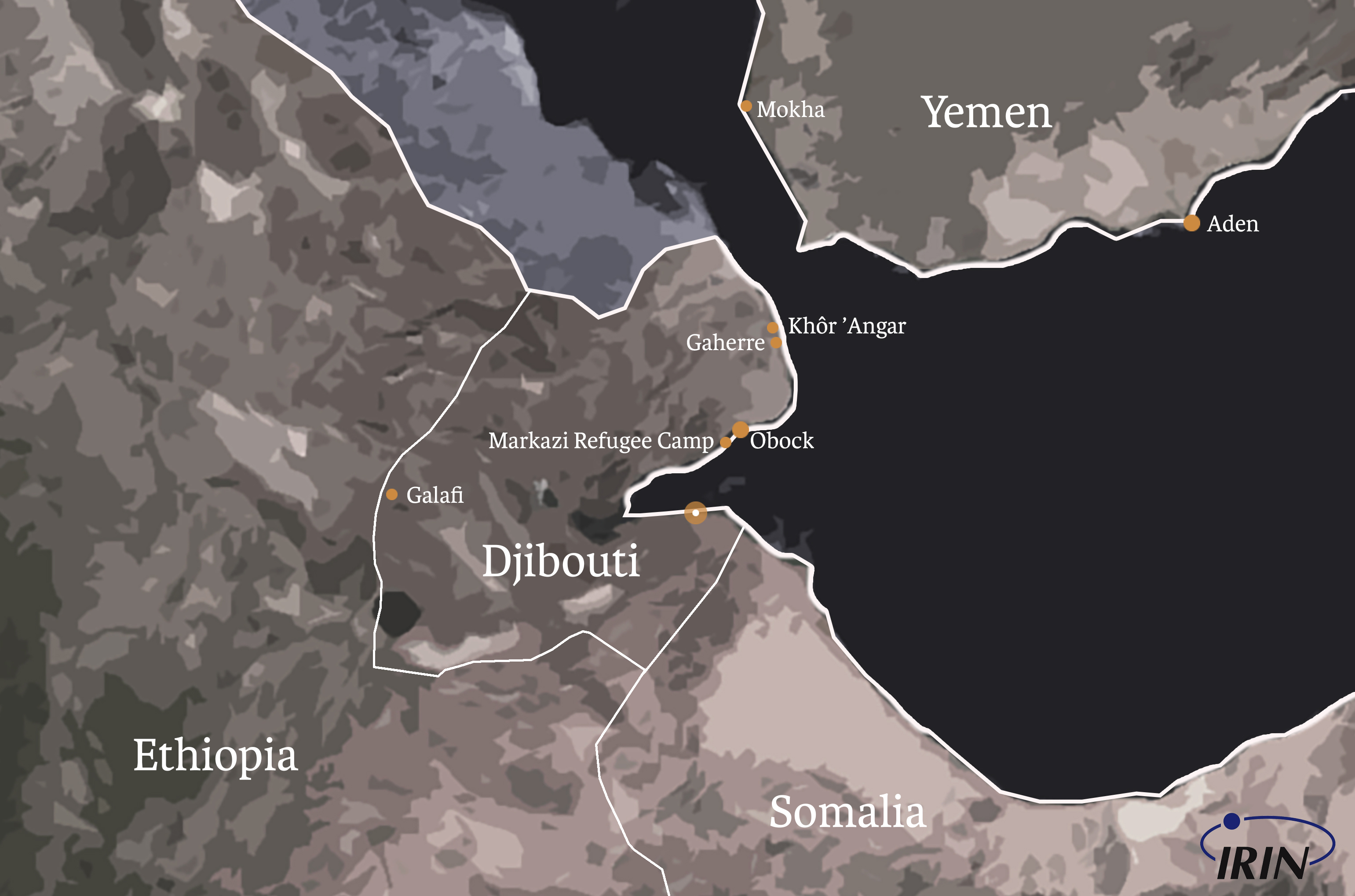 “This route is particularly dangerous; migrants on this route face human rights abuses (including sexual and physical abuse), and a high risk of being trafficked, kidnapped, and sent for ransom,”  Danielle Botti of the Regional Mixed Migration Secretariat told IRIN by email.

From Ethiopia, many cross into Djibouti via the border town of Galafi, then walk for days across lava fields and arid zones where temperatures can reach 50 degrees Celsius.

Once they reach Obock, migrants make a last push north across the desert to a series of beaches located just south of Khôr ‘Angar, a small town that hosts a coast guard station and tourist bungalows.

Under cover of night, the migrants wait for motorised boats that take them about 30 kilometres to various landing points across the Bab al-Mandab Strait. On a busy night, hundreds of people make the journey, according to the International Organisation for Migration (IOM).

In a cycle of migration, deportation, and migration once again, many are deported en route or once in Saudi Arabia, only to repeat the journey after they get home or back in Djibouti.

Here is a photographic snapshot of the journeys they take: 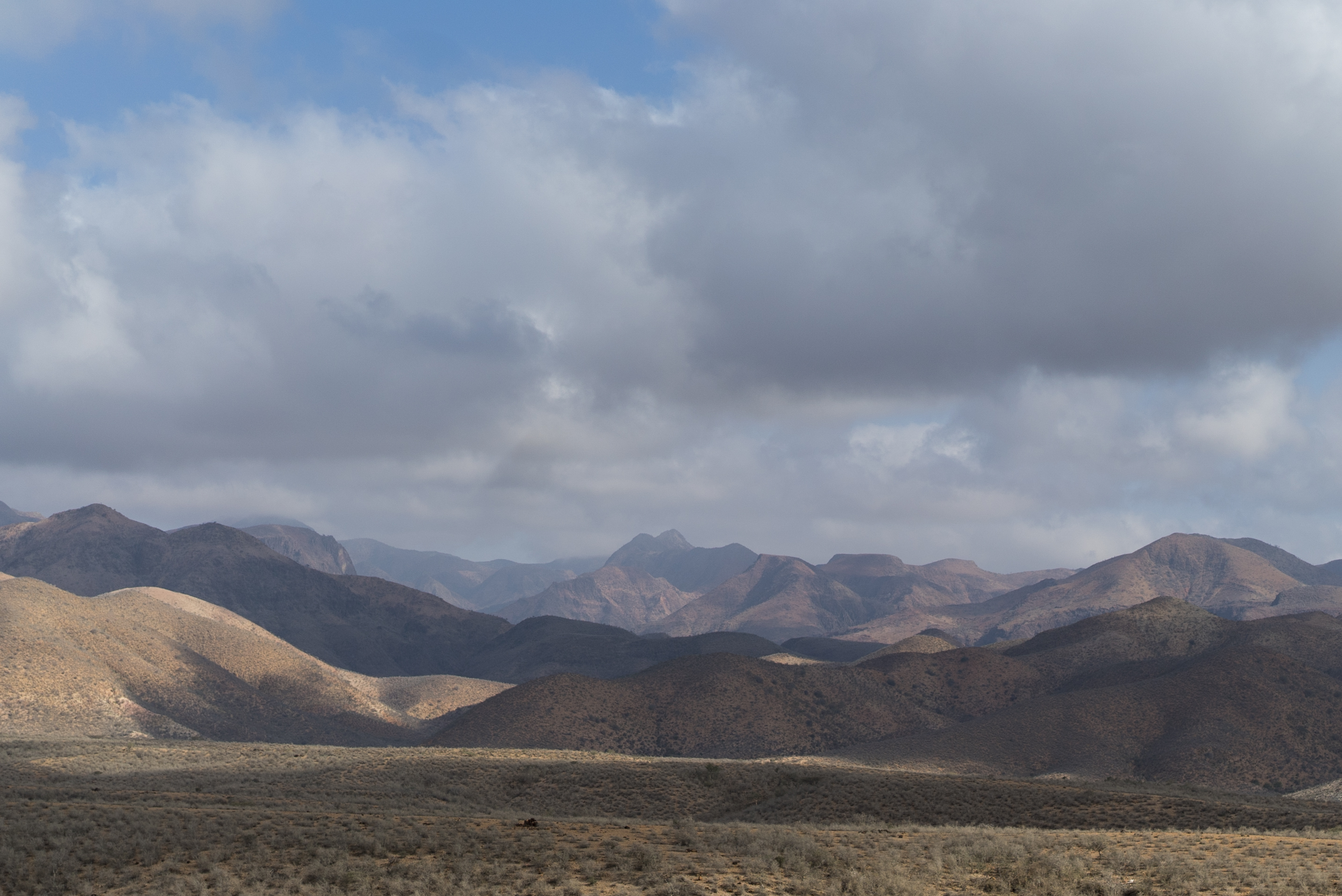 NEAR TADJOURA, DJIBOUTI – Tens of thousands of migrants travel across Djibouti to Yemen every year, through arid landscapes like these. The journey from the Horn of Africa to or through Yemen can take as little as a couple weeks or as long as two months. Many who make it take years to raise the necessary funds – $130-$1,500, depending on the length of the trip. 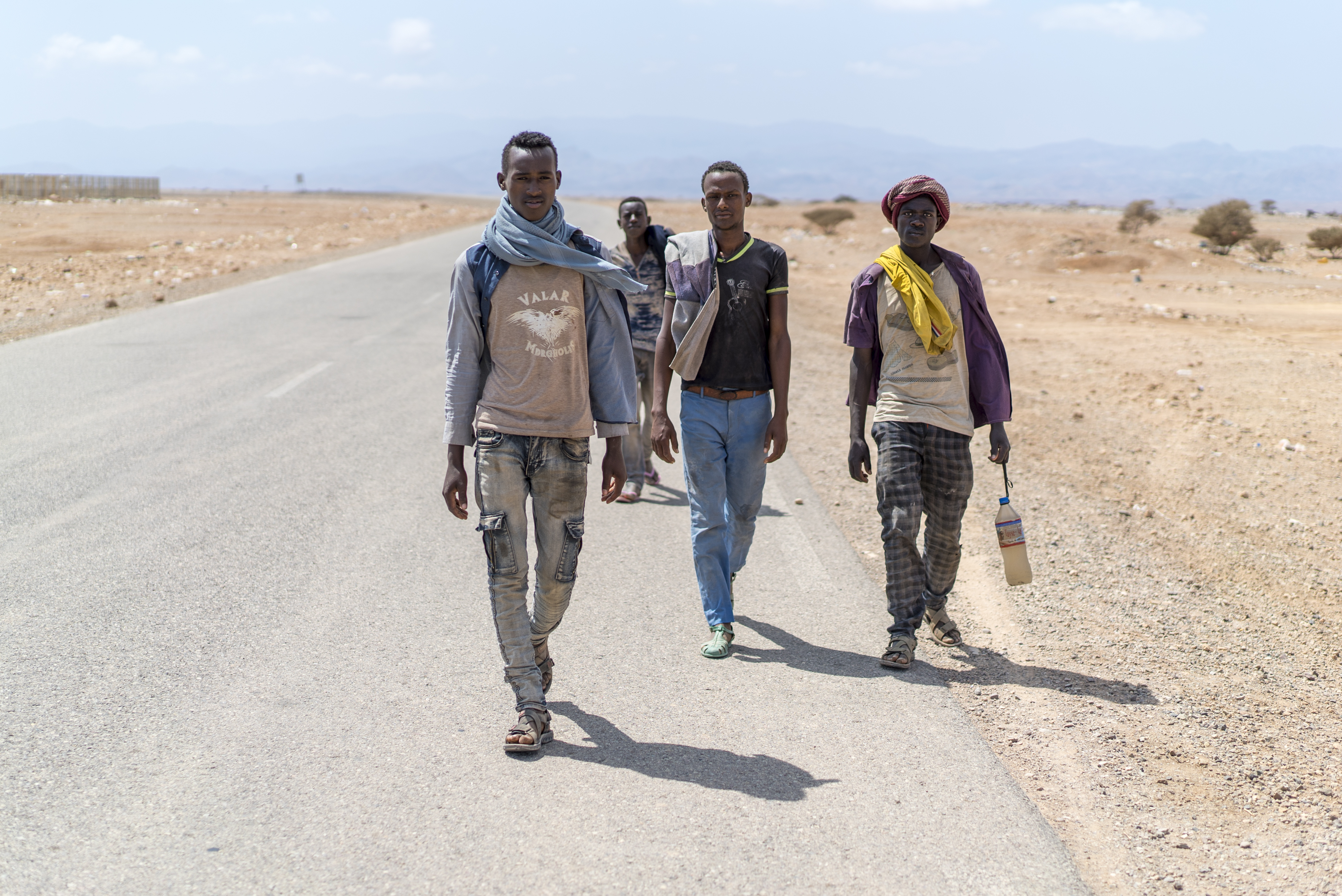 OBOCK, DJIBOUTI – After walking for two months, these men arrived in Obock from Ethiopia in late February.

Many Ethiopians travelling to Yemen and Saudi Arabia through Djibouti come from the Oromia region, site of frequent clashes between anti-government protesters and the police.

‘WE CONTINUED SEVEN DAYS WITHOUT SHOES’

OBOCK, DJIBOUTI – Ibrahim Mohamad Abdulaye, 18, walked for 20 days to reach Obock from his village outside of Harar, Ethiopia. "Our shoes ripped and we continued seven days without shoes," he said. "The ground was hot, so around noon we had to stop and wait until the sun went down a bit before we continued." Only after he arrived did he realise that the Red Sea divided Djibouti from Yemen. Exhausted by his overland trek, he decided not to risk the  dangerous sea voyage. He planned to return to Ethiopia with the assistance of IOM. 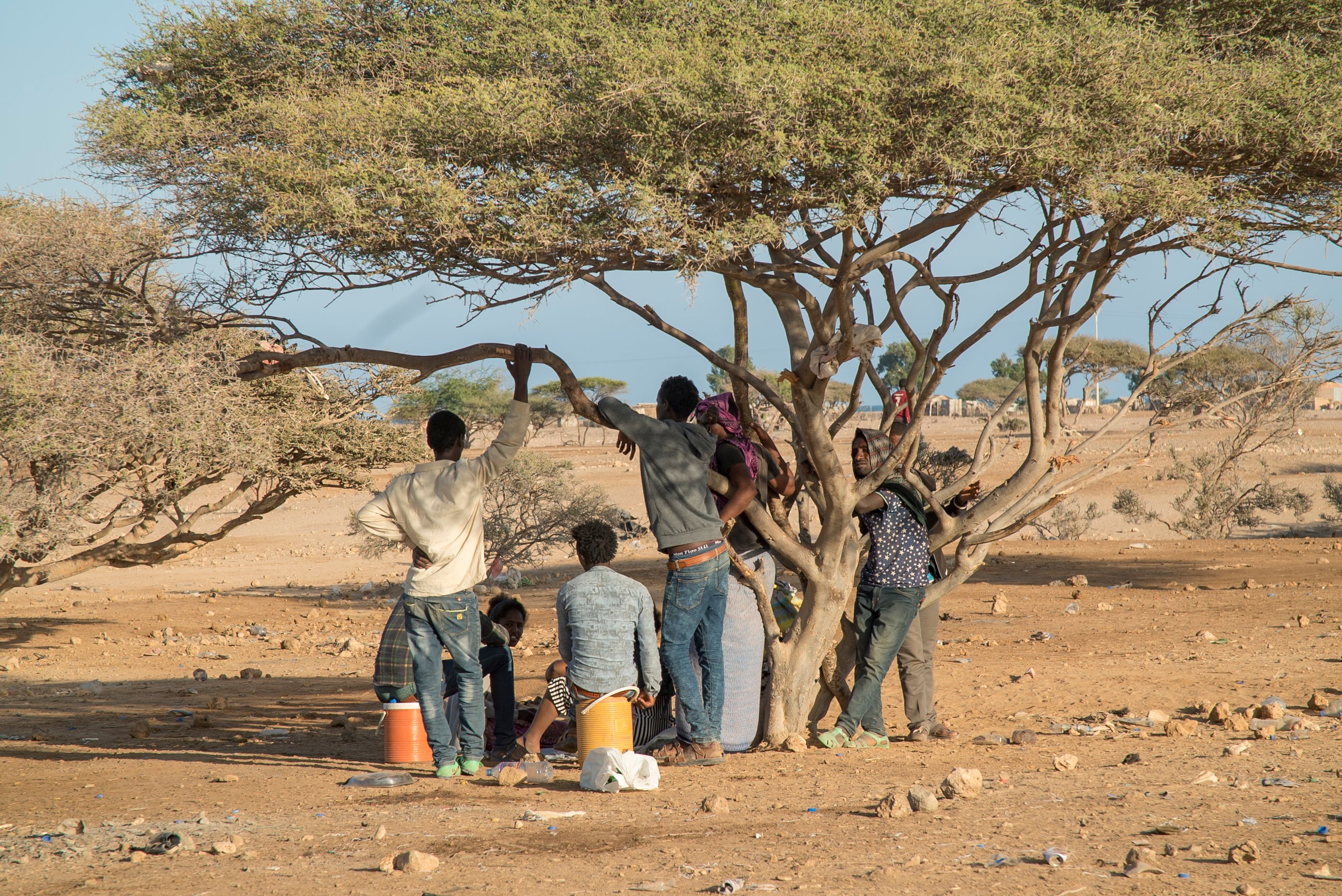 FANTAHERO, DJIBOUTI – Fantahero, a hamlet just outside of the port town of Obock, is a gathering point for many migrants, a place of rest before the gruelling journey to the Red Sea coast and onwards to Yemen. An average of 800 migrants per day wait there in the shade of sparse acacia trees, according to NGOs that track migrant movements. 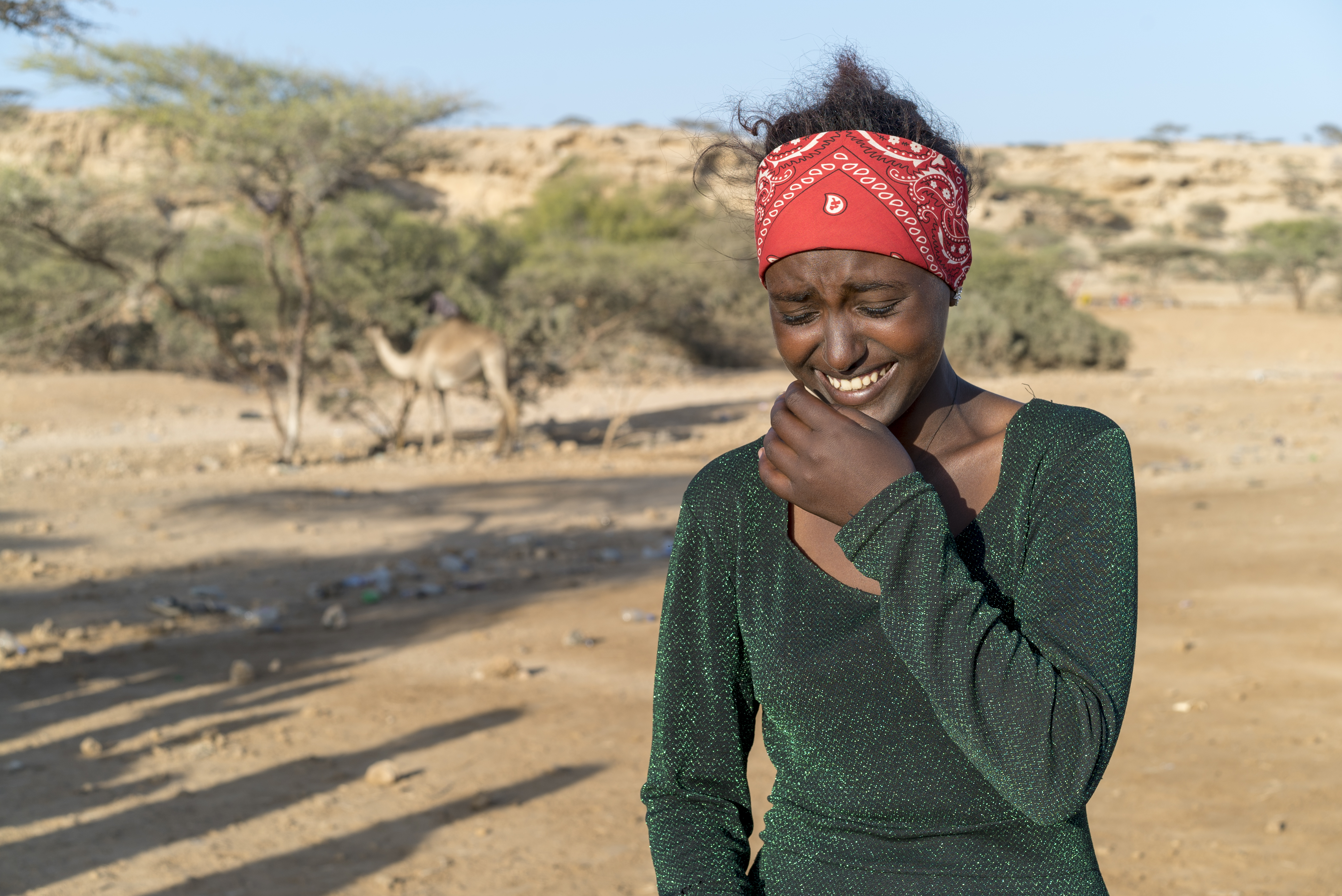 FANTAHERO, DJIBOUTI – The vast majority of economic migrants travelling between Ethiopia and the Gulf are men. But a handful of women also make the journey every day. Alam Haile, 20, was trying to return to Saudi Arabia, where she had cleaned houses for two years before she was deported back to Ethiopia. The long journey doesn't scare her, although some 39 percent of male and 23 percent of female respondents reported being kidnapped or held against their will along the migration corridor. “We are like males. We can’t be afraid," she said. For this photo, she couldn't stop giggling. 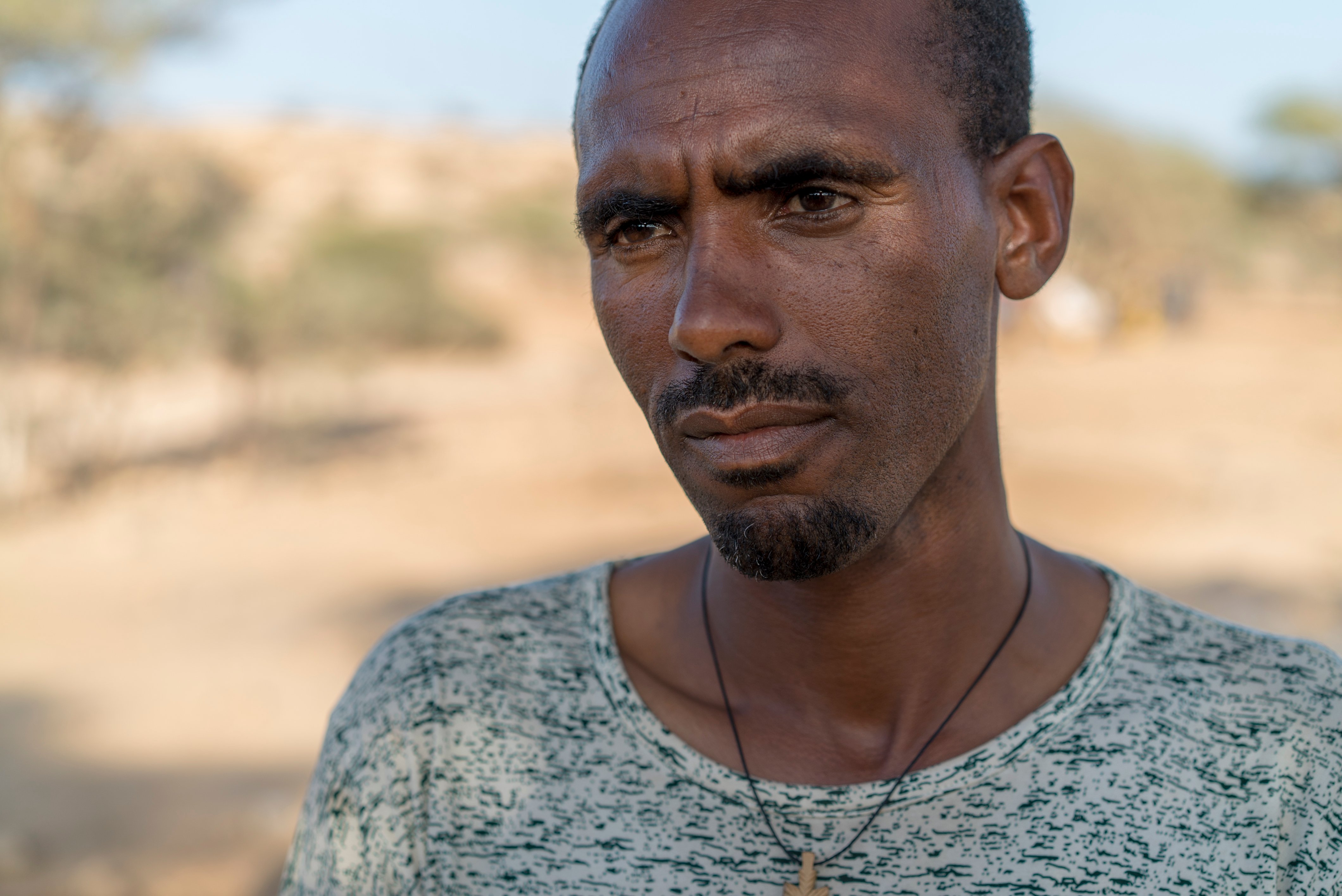 FANTAHERO, DJIBOUTI – In a back-and-forth cycle of deportation and migration, many migrants journey through the Horn of Africa to Yemen and beyond over and over again. Alafom Gebre Sadik, 30, reached Saudi Arabia several times and found work there as a labourer. Each time, he was deported back to Ethiopia after two years. In February, he was attempting his fourth crossing into Yemen, with plans to continue to Saudi Arabia. 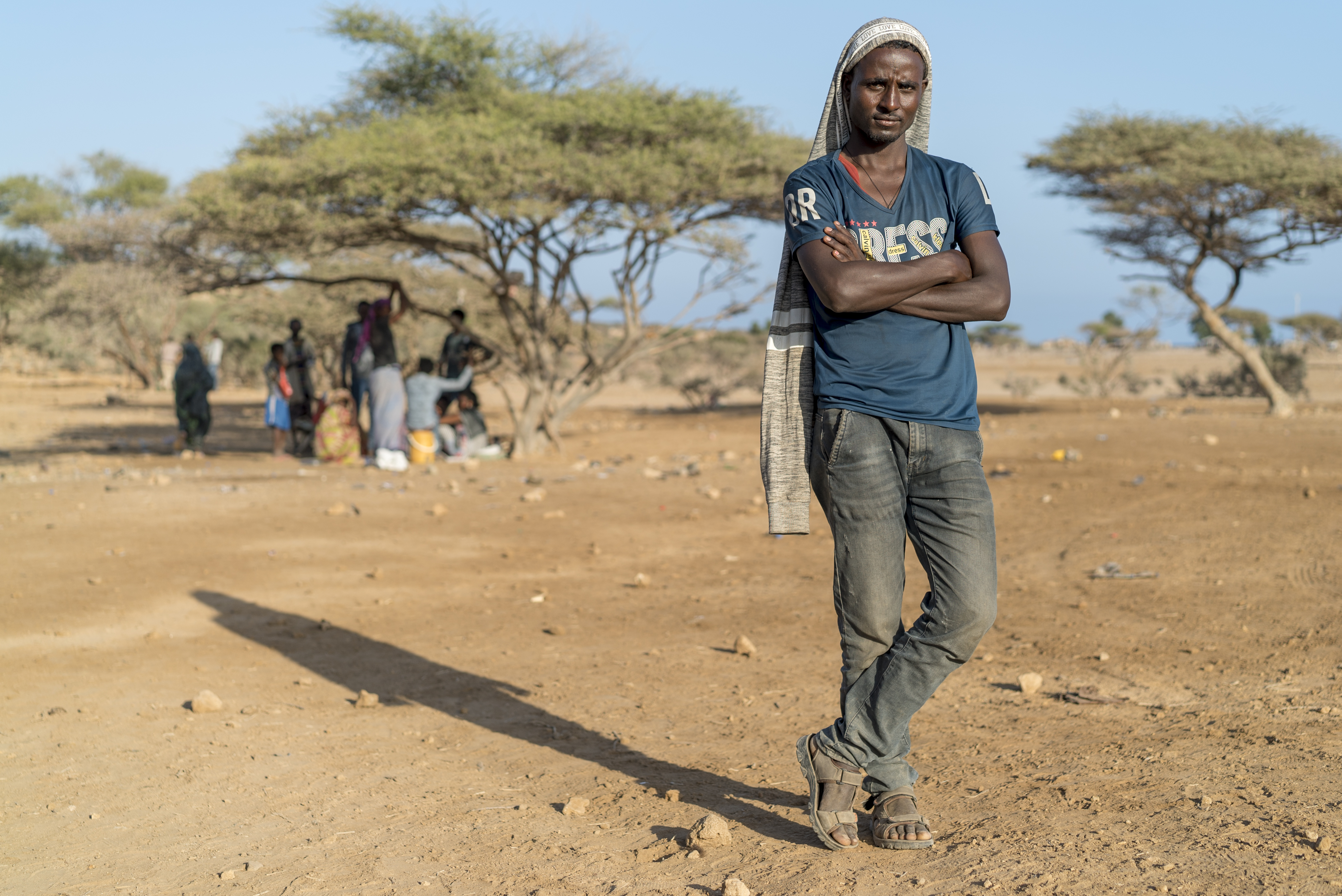 ‘I WAS VERY SCARED’

FANTAHERO, DJIBOUTI – Deste Berhe, 25, says he saw a car explode after it was hit by an aerial bomb shortly after arriving in Mokha, the coastal town in Yemen that he first travelled to in 2015. "I was very scared," he said. So why is he returning again to Yemen, and onwards to Saudi Arabia? "Because in my country, there are no jobs." 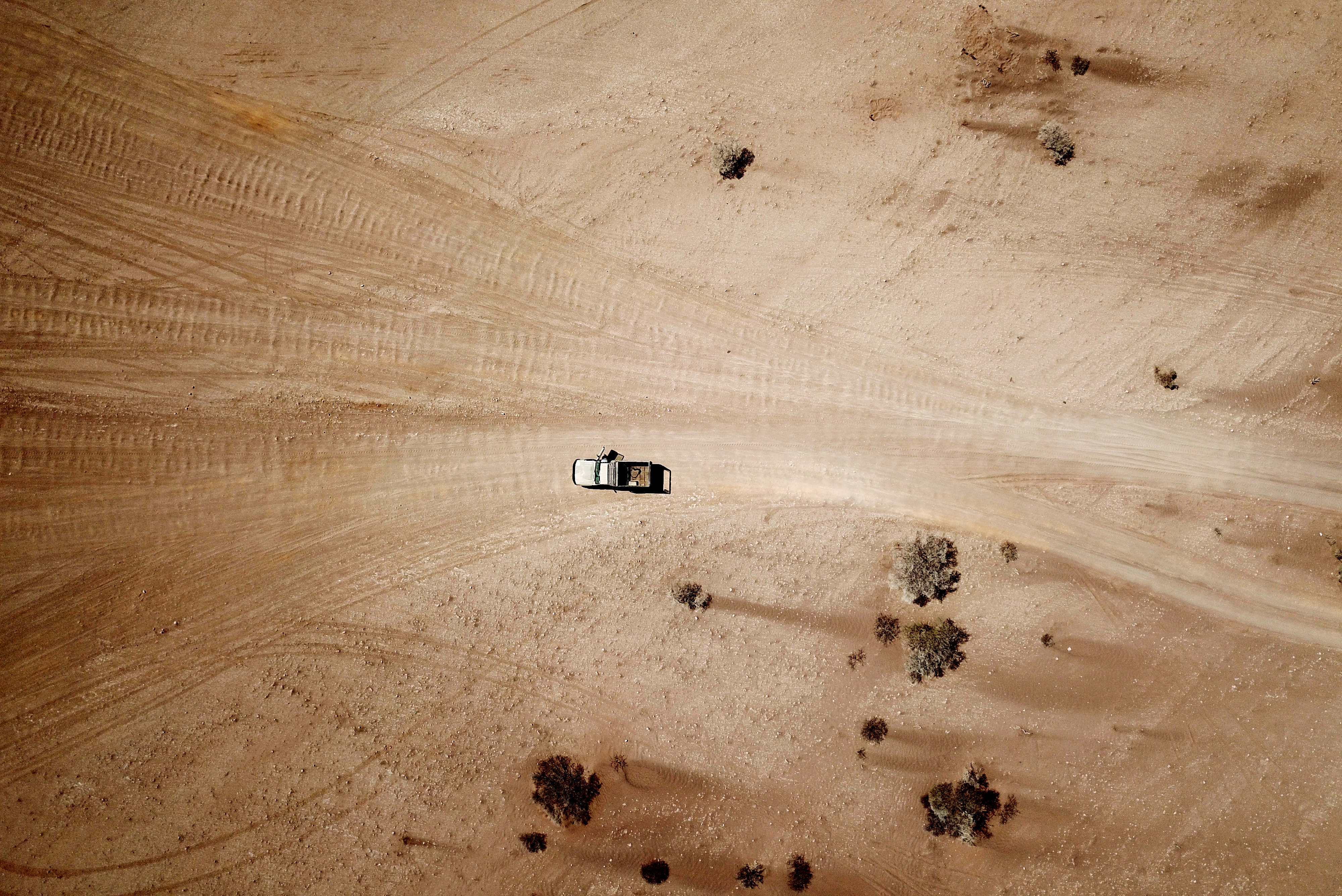 APP. 20 KILOMETRES FROM OBOCK, DJIBOUTI – An aerial view of the road from Obock to Gahere beach, where migrants depart for Yemen. Obock marks the beginning of the last leg of the trip, to various beaches about 40 kilometres north of the town. 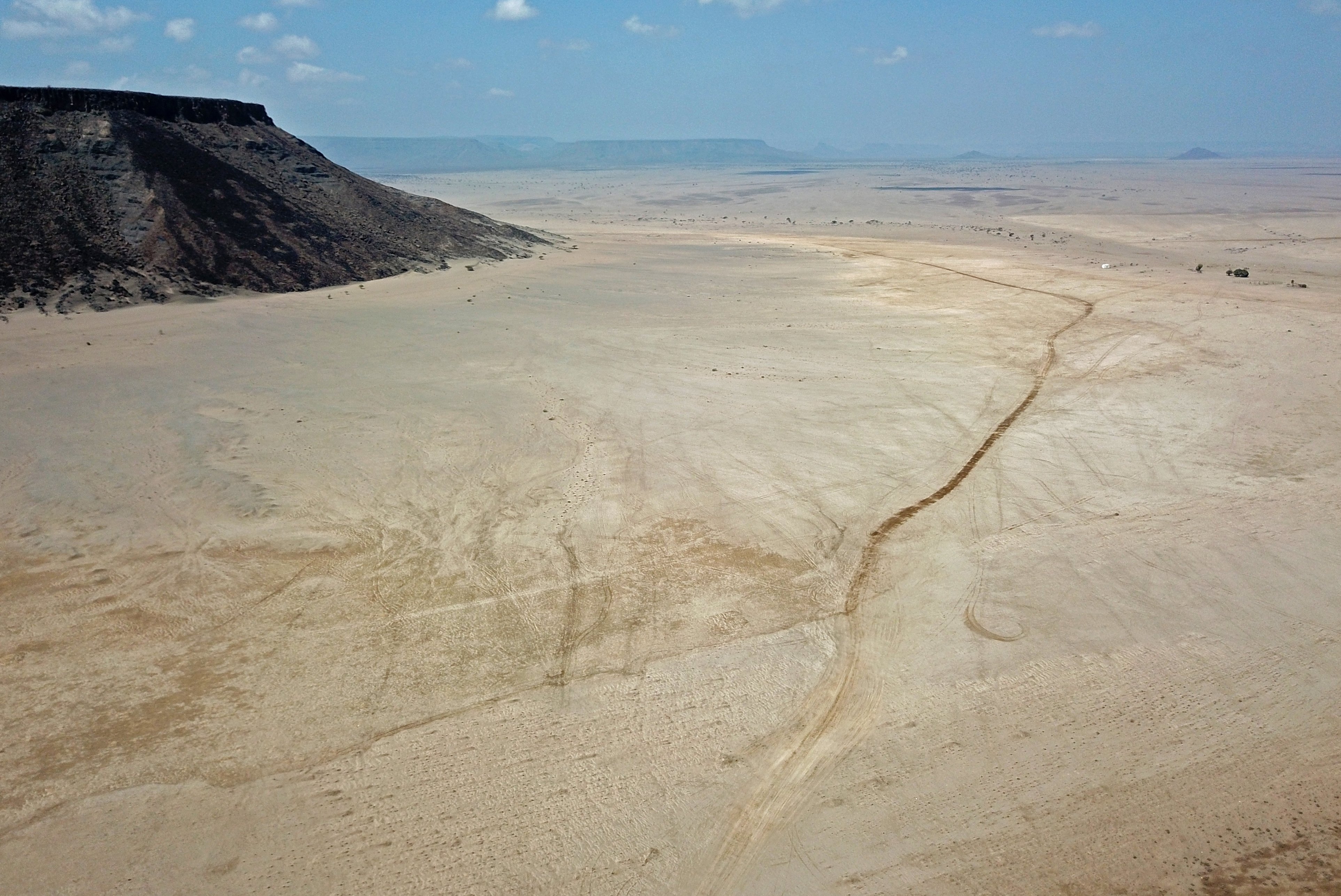 NEAR GAHERRE BEACH, DJIBOUTI – The look back at the route from Obock towards the Red Sea coast, where migrants then travel by boat to Yemen and, often, onward to Saudi Arabia in search of work. 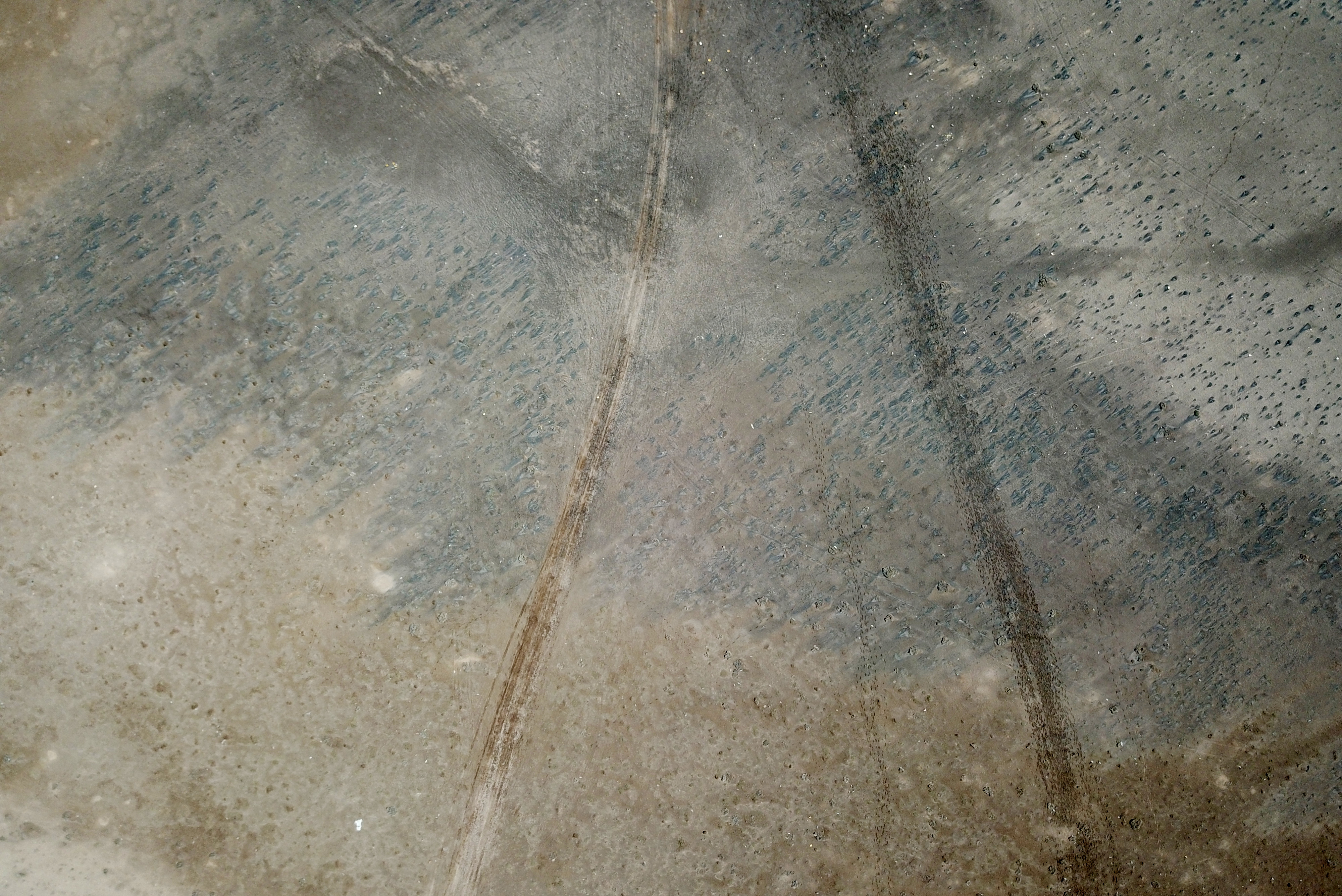 BY FOOT OR BY VEHICLE

NEAR GAHERE BEACH, DJIBOUTI – On the left, tyre tracks left from vehicles that carry migrants who have enough money to pay for the nearly two-hour drive. On the right, footprints marking the path that migrants took on the approximately 40-km walk from Obock to the Red Sea departure point. 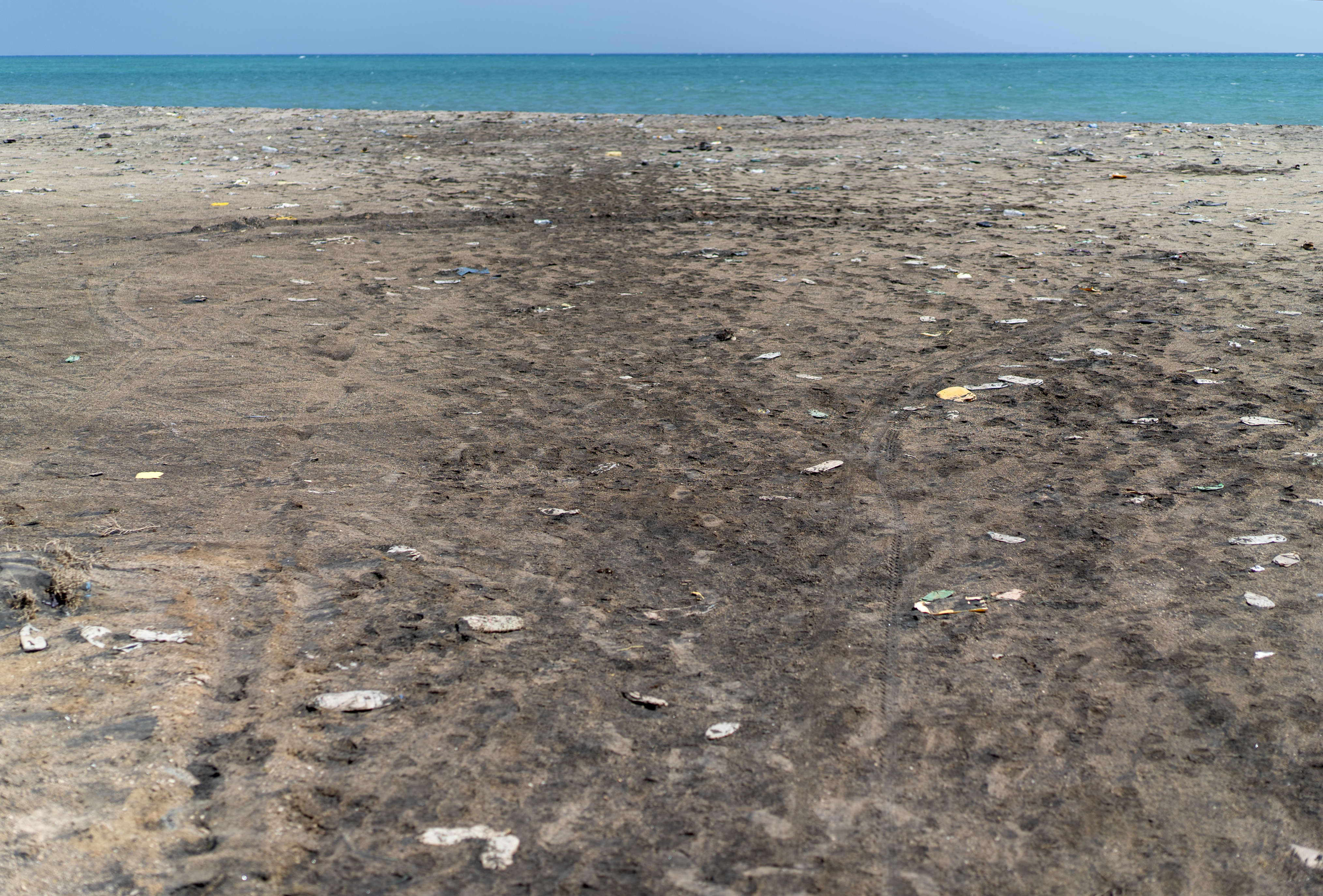 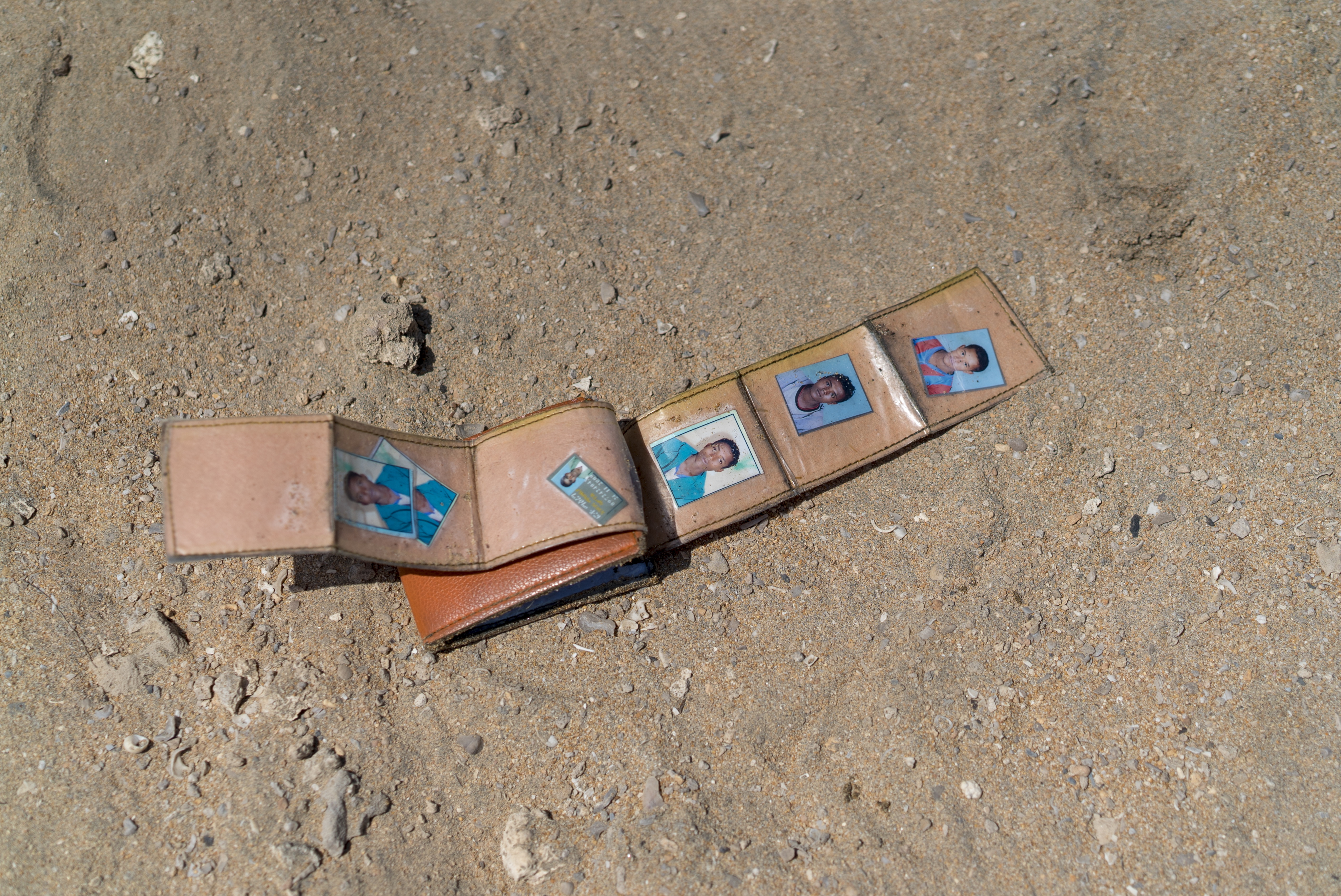 TIIR BEACH, DJIBOUTI – This wallet was left behind at Tiir, another beach approximately 10 kilometres south of Gaherre from which migrants depart on the sea-crossing to Yemen. The area has historically been used for military exercises. 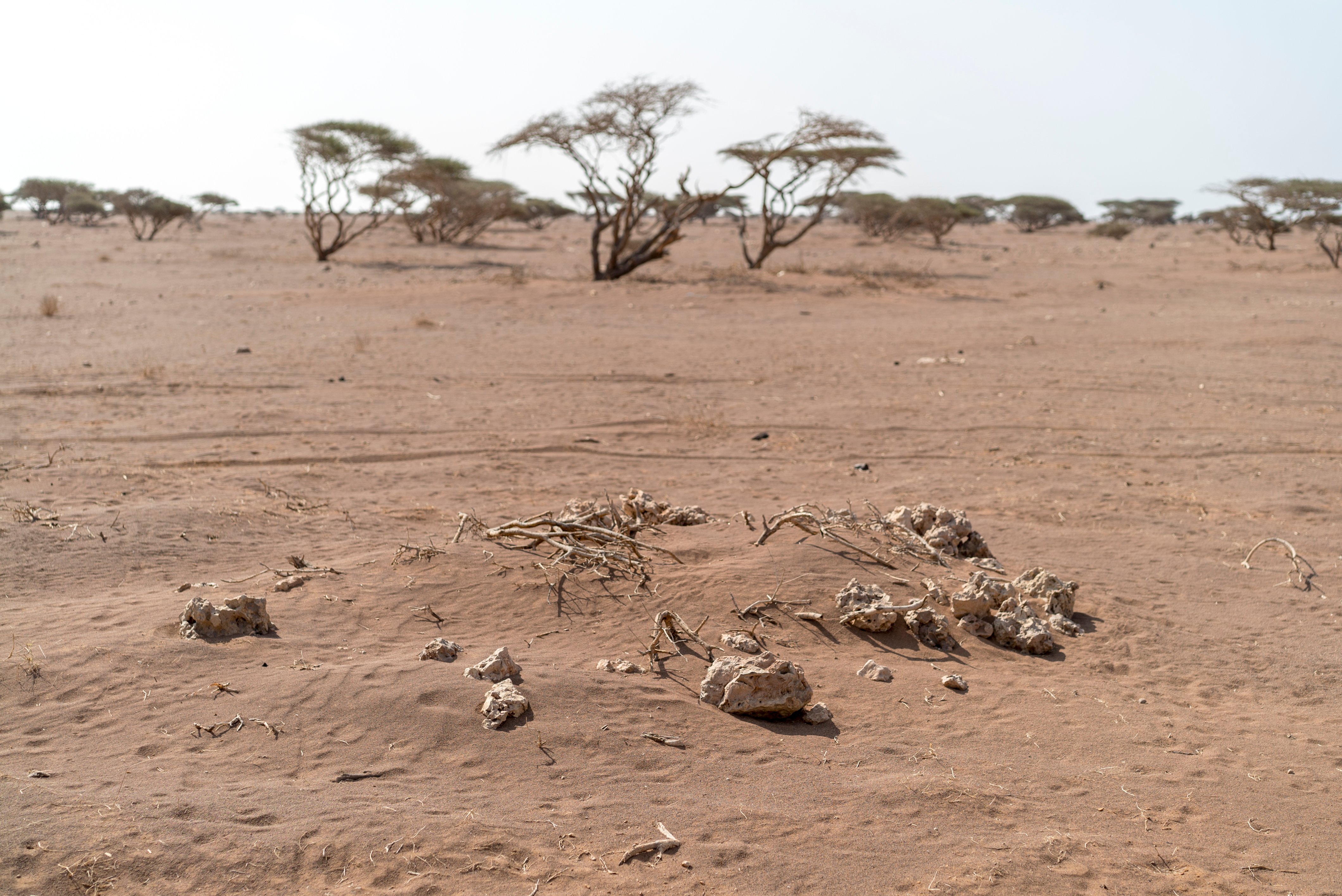 APP. 15 KMS FROM OBOCK, DJIBOUTI – Many economic migrants cannot afford to pay for the two-hour drive from Fantahero to Gahere Beach. Instead, they walk. Here, an unmarked grave remains on the site where a migrant perished of thirst while making the journey in 2015, according to a local driver, who wished to remain anonymous. The driver added that a government crackdown on smugglers has made the trip even more dangerous. Until five years ago “there were no difficulties," the driver said. "Now they have to make the journey at midnight, secretly." 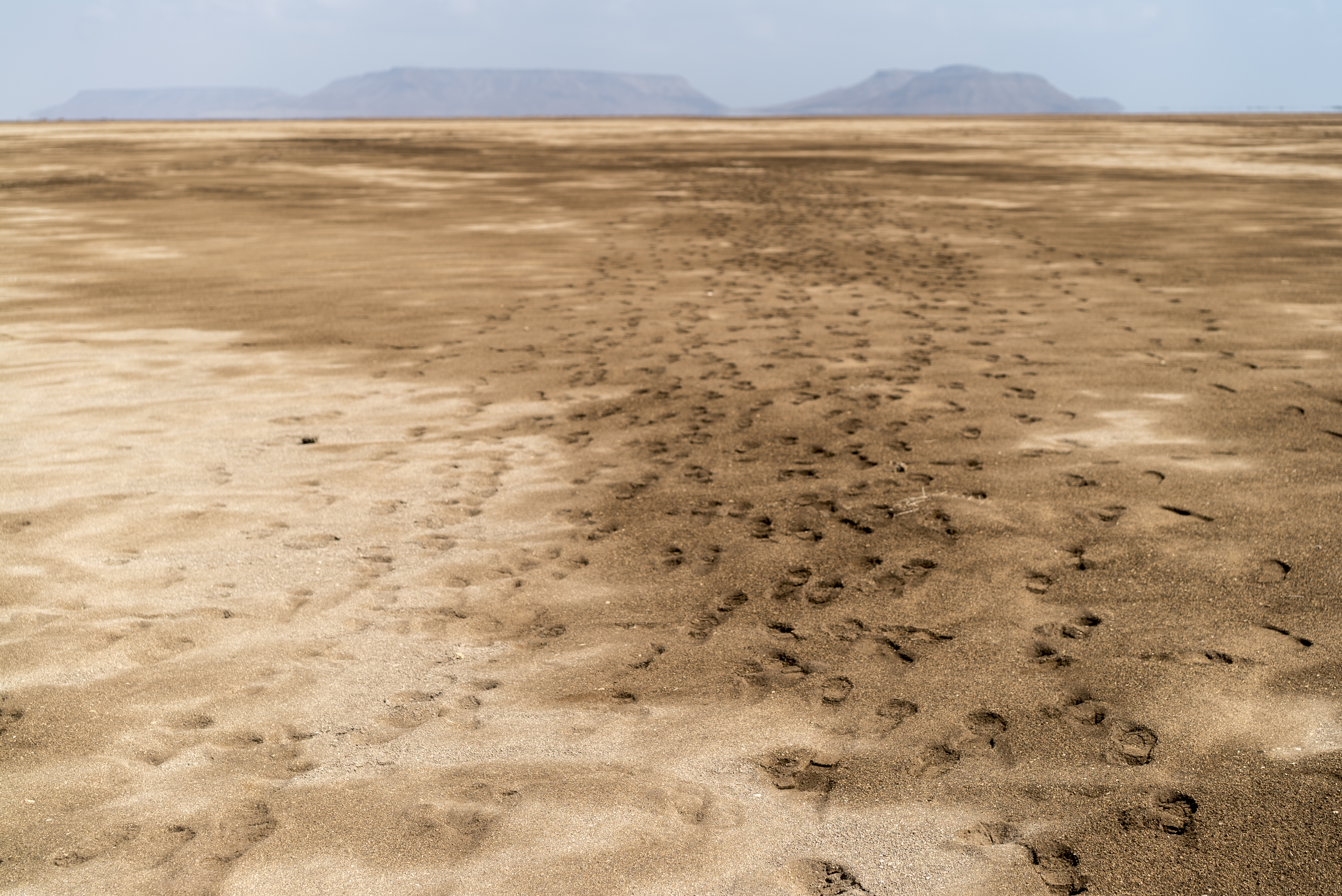 A MIDNIGHT WALK, A TRAIL OF FOOTPRINTS

APP. 30 KMS NORTH OF OBOCK, DJIBOUTI – Hundreds of migrants have walked across these dry desert plains from Obock to Gahere Beach. Here, a trail of footprints indicates where migrants passed through in the middle of the night. 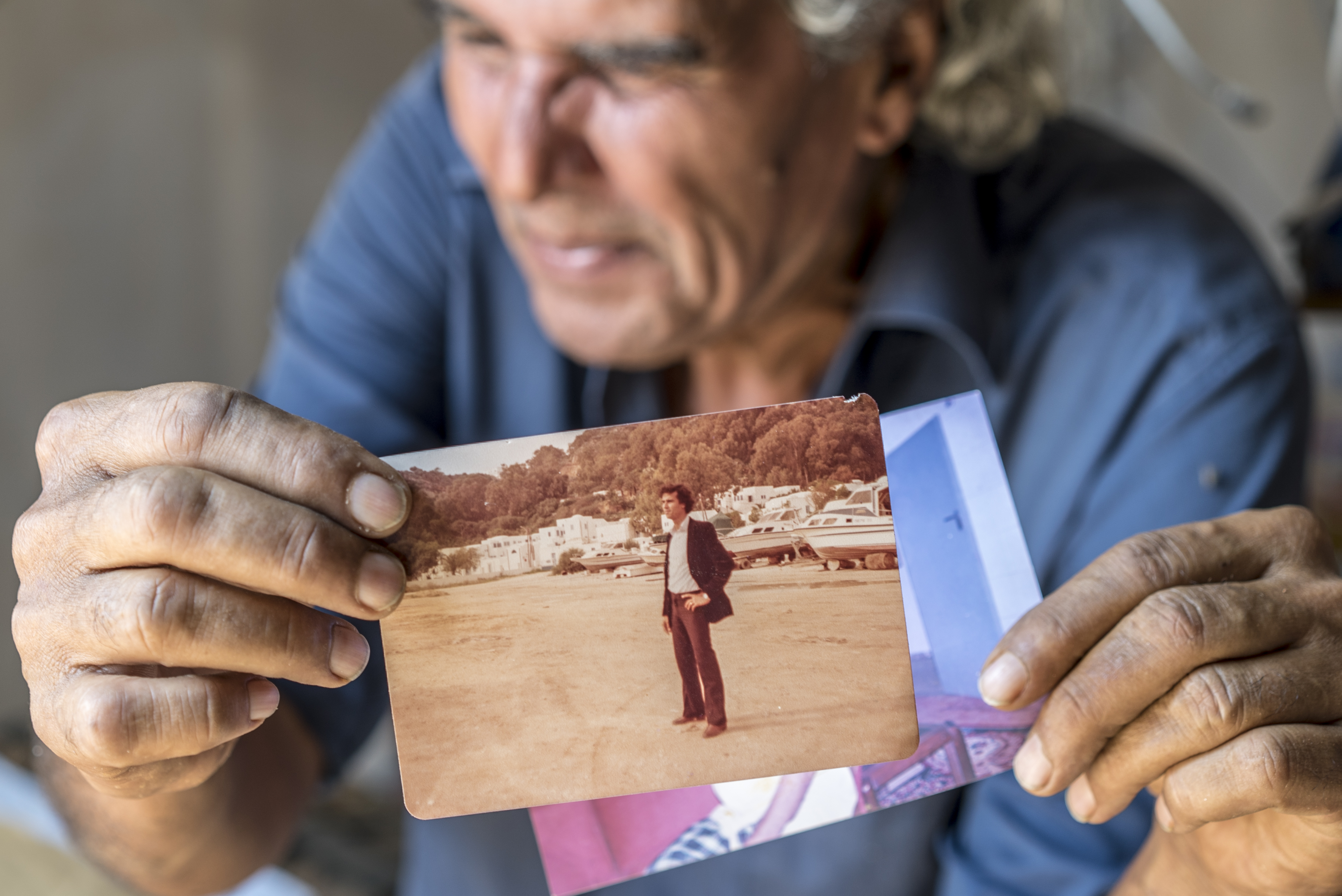 NOTHING LEFT IN YEMEN

MARKAZI REFUGEE CAMP, DJIBOUTI – Ali Aman, 65, has been waiting for nearly three years with the hope of being resettled elsewhere. An urban planner and architect, he fled Yemen after his house and car were bombed. “I lost my job, I lost my car, I lost my house: that’s all I had," he said, displaying photos of his life in Aden long before the war. 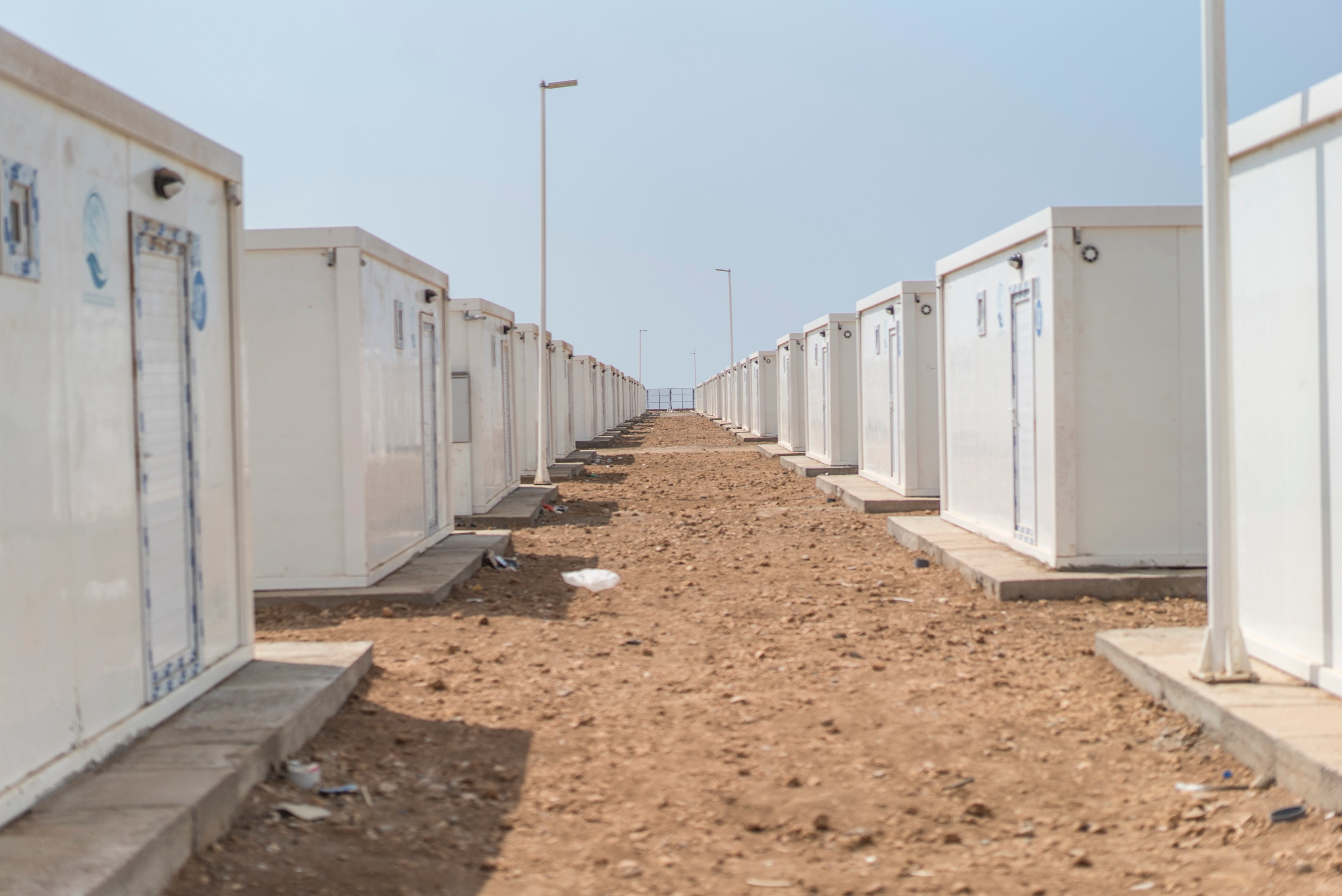 MARKAZI REFUGEE CAMP,  DJIBOUTI – For Yemenis who reach Djibouti (recent arrivals in February said they had paid $200 each for the trip), the Markazi refugee camp is often home. It now houses 1,300 people but is preparing for a possible influx of many thousands more if the humanitarian situation in Yemen deteriorates further. The King Solomon Foundation of Saudi Arabia recently donated 300 of these prefabricated shelters, all outfitted with air conditioning. In late February, the shelters had not yet been connected to electricity and remained unoccupied. 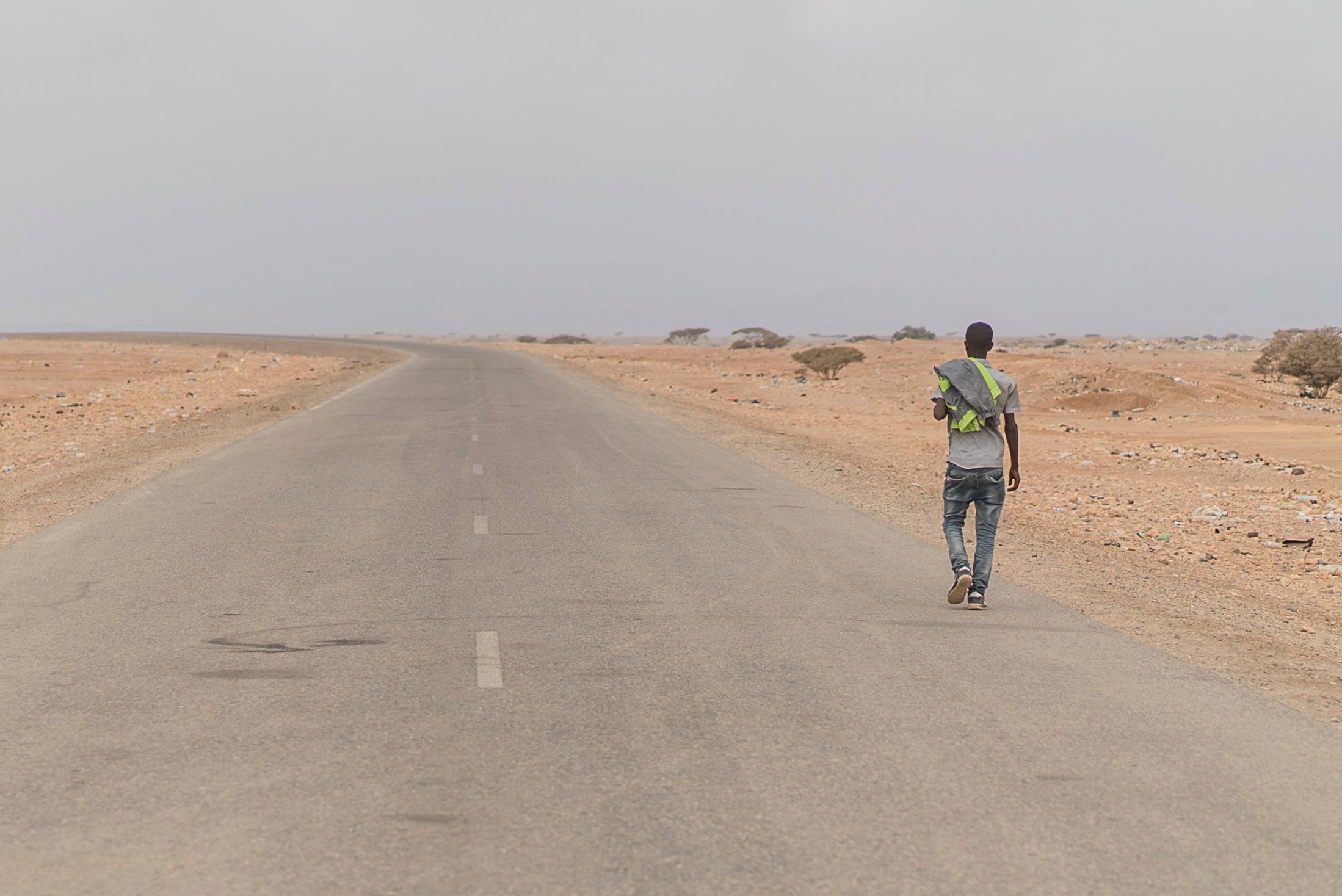 A CHANGE OF PLANS

OBOCK, DJIBOUTI – Zaro Hailyu, 28, walked for 15 days from his home in eastern Ethiopia to Obock, with plans to cross into Yemen and then enter Saudi Arabia, where he hoped to find work as a labourer. He paid about 4000 biir (approximately $150) for the trip to Obock but then ran out of money. While some assistance is available in Obock to those who decide to turn back, as well as to those who end up stranded in Yemen, most migrants receive little help on their journey through Djibouti. Realising that he couldn't pay for the trip across the Red Sea, Hailyu decided to return home, again by foot.