Aisha woke up bruised and disoriented in a hospital bed in Kinshasa. Her husband, a driver for a prominent opposition politician in the Democratic Republic of the Congo, was dead. Her five children were missing. One thing was clear: She had to leave her home.

On a cold November morning last year, Aisha set foot in an airport half a world away. Unable to understand the local language, she walked through immigration on a tourist visa, picked up her bags, and began her new life as an asylum seeker in Mexico.

As the administration of US President Donald Trump tightens immigration policies and refugees crossing the Mediterranean face a backlash in Europe, a growing number of people like Aisha are looking elsewhere for safe haven.

Mexico, traditionally an origin country for migrants or a transit stop on the treacherous Central American route to the United States, now finds itself as a destination for people fleeing violence and persecution in their homelands.

But the swelling numbers have caught Mexico by surprise – and authorities are struggling to deal with the influx. 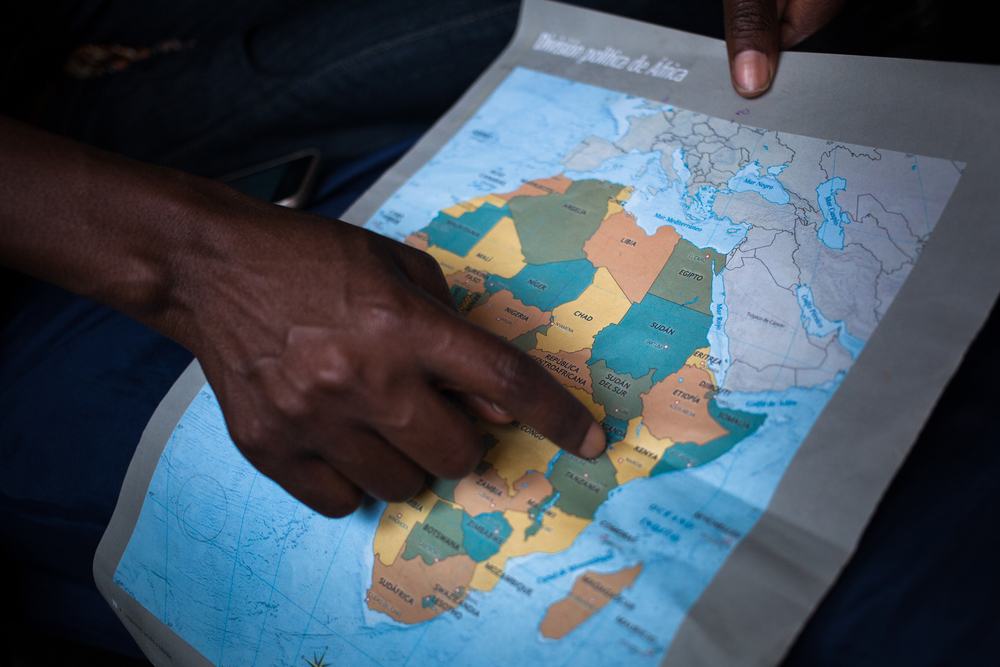 Erika Piñeros/IRIN
With the help of a map of Africa, Aisha explains the situation in Congo and the reason why she fled. She says she witnessed her husband’s killing and was then tortured and left for dead.

“I chose Mexico because human rights are respected here,” Aisha told IRIN. “It’s a country of migrants, and it doesn’t have political ties with my country.”

Aisha is just one face of the shifting refugee trend in Mexico. According to the Mexican Commission for Refugee Assistance, or COMAR, which processes asylum applications, the country has seen a nearly 600 percent rise in asylum petitions over the last four years.

In 2013, COMAR received about 1,300 requests for asylum. That jumped to almost 8,800 last year. Groups that work closely with asylum seekers in Mexico predict there could be 18,000 applications this year.

The majority of applicants come from Central or South American nations. But many, like Aisha, are making the long journey from origin countries in Africa and the Middle East.

Aaron Rodriguez works for the Scalabrinian Mission for Migrants and Refugees. His organisation used to mainly help migrants pushing north in search of better opportunities, but the last year has seen it take in asylum seekers from four continents, including people fleeing violence in countries like Congo, and Syria, even Ukraine.

Rodriguez told IRIN that Mexico suddenly finds itself facing an unexpected problem: large numbers of migrants wanting to stay. “This new reality is taking us all by surprise,” he said.

With traditional settlement nations in Europe and the United States building up barriers, more and more people are looking to Mexico as a destination.

“When the great borders close… Mexico, every day, is recognised more as a destination country,” explained Rodriguez. 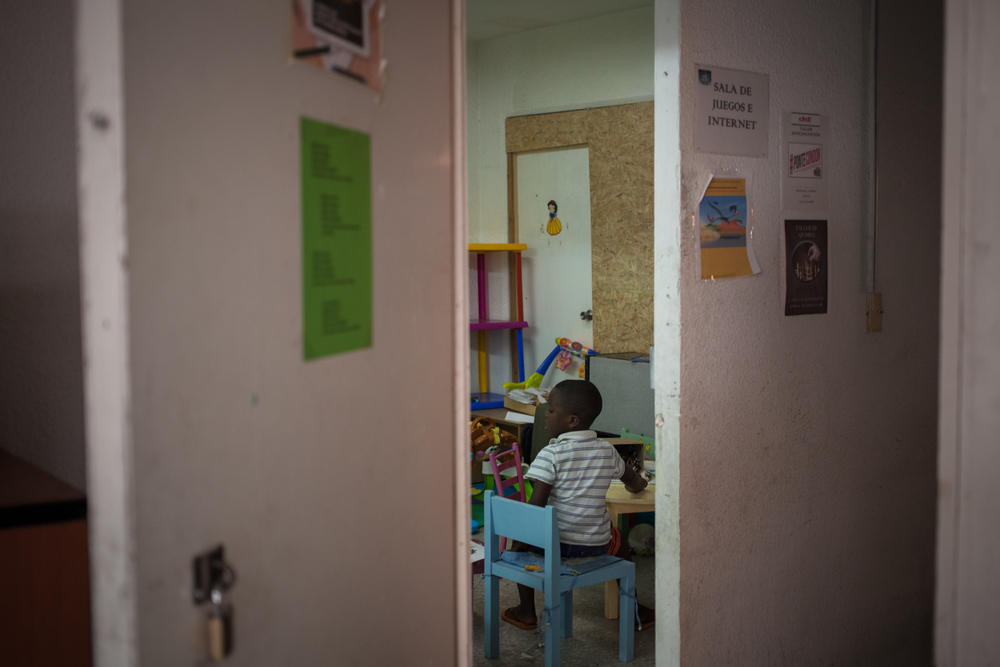 Erika Piñeros/IRIN
A young boy from Congo plays at a shelter for migrants and refugees in Mexico City. Some refugee lawyers claim Mexican authorities systematically reject asylum petitions from people from Africa.

A report by US-based Human Rights First warned that COMAR was “exceedingly understaffed”. As protection applications surge, an asylum process that is meant to take 45 days now stretches on for months.

Critics say its decisions can be flawed, unfair, and wildly inconsistent – the report cites the case of a Haitian man who was granted refugee status while his wife and children were denied.

“Mexico,” the report concluded, “is far from a safe third country for refugees.”

A lawyer who represents some 50 rejected applicants told IRIN there is a general consensus among refugee lawyers in Mexico that COMAR is systematically denying asylum claims made by African applicants.

“It’s a constant negative response,” said the lawyer, who asked not to be named in order not to impact the cases of current clients. “No one has had a case [from Africa] that had been accepted right away.” 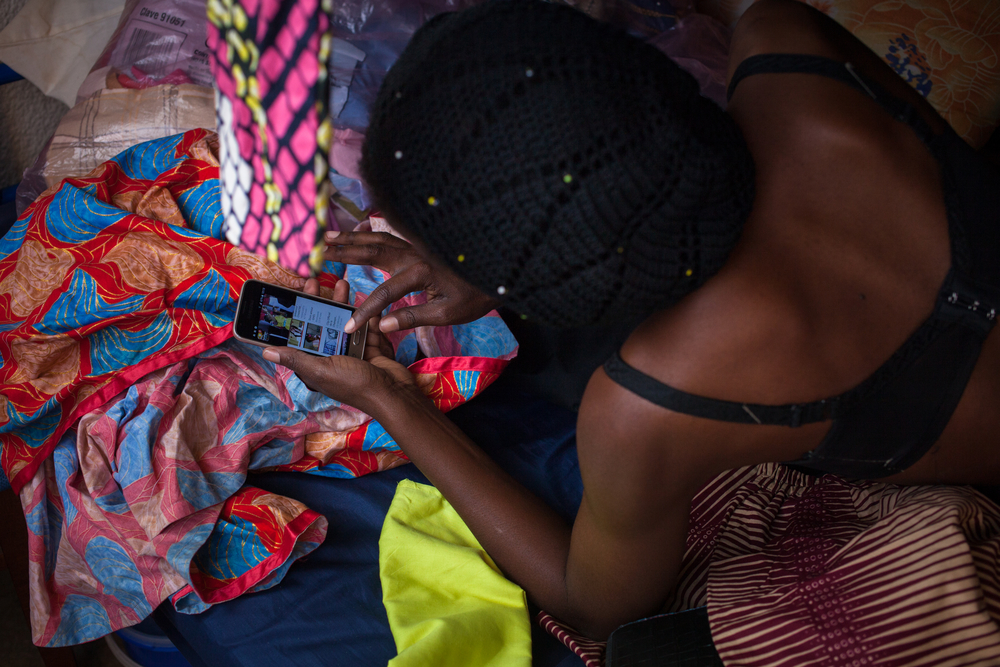 Erika Piñeros/IRIN
Aisha, 38, plays music on her phone. Her asylum petition was denied by COMAR, which she claims treated her like a criminal. She says the process was emotionally draining: “if I’m asking for their protection, how could they treat me in that way?”

Aisha’s own application was rejected earlier this year. She told the Mexican authorities that she witnessed presidential guards in Congo murder her husband before they attacked her and left her for dead.

Despite the scars Aisha bears as proof of the torture she endured, COMAR argued it was her husband who was a target, not her.

“They interviewed me in the dark as if I were a criminal,” she remembered with frustration. She said the Mexican officials and interpreters didn’t understand her; they didn’t write down dates or relevant details; and she feels they laughed at her as she told her story.

Thanks to her lawyer, Aisha’s case has been annulled and will be reopened. But the process has left her drained. Her morale is low.

“They don’t realise my loss,” she said.

A COMAR representative declined IRIN’s interview request. In a written response to questions, the agency said that keeping up with the “exponential” surge in asylum requests was “a constant challenge”, but noted that asylum recognition rates have climbed, from 37 percent in 2013 to 62 percent of decisions rendered last year.

“Considerable efforts have been made in favour of extending the right for all people arriving in Mexico to request asylum,” the statement read.

Some new asylum seekers are choosing Mexico because it’s seen as a safer alternative to the perilous Mediterranean route to Europe, where more than 7,700 people have died over the last two years.

Victor, a 26-year-old student from Cameroon’s anglophone region, fled to Mexico after he began giving statements to international media about the growing oppression in his home. He said his family paid a smuggler to take him to Mexico, fearing the government would punish his outspokenness. 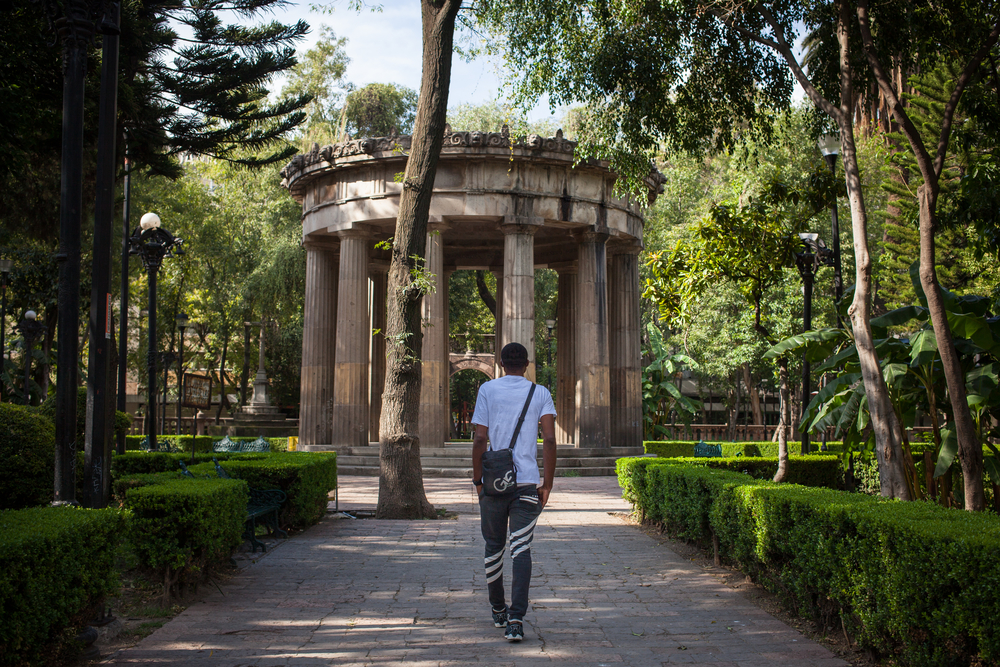 Erika Piñeros/IRIN
Victor walks through a park near the shelter where he has stayed since his arrival in Mexico City. He says he wants to stay in Mexico, learn Spanish, and study.

But his 20-year-old brother chose a riskier route. The last time they spoke online, he was in Libya, attempting to reach Europe via the Mediterranean.

“I worry about him. I know that one is not an easy way; it’s rough,” Victor said. “I pray for him every day. My mum prays for all of us.”

Victor’s asylum case is still pending after seven months. He told IRIN he’s treated differently in Mexico because of the colour of his skin but still feels fortunate to be here. “It is better than Africa,” he said. 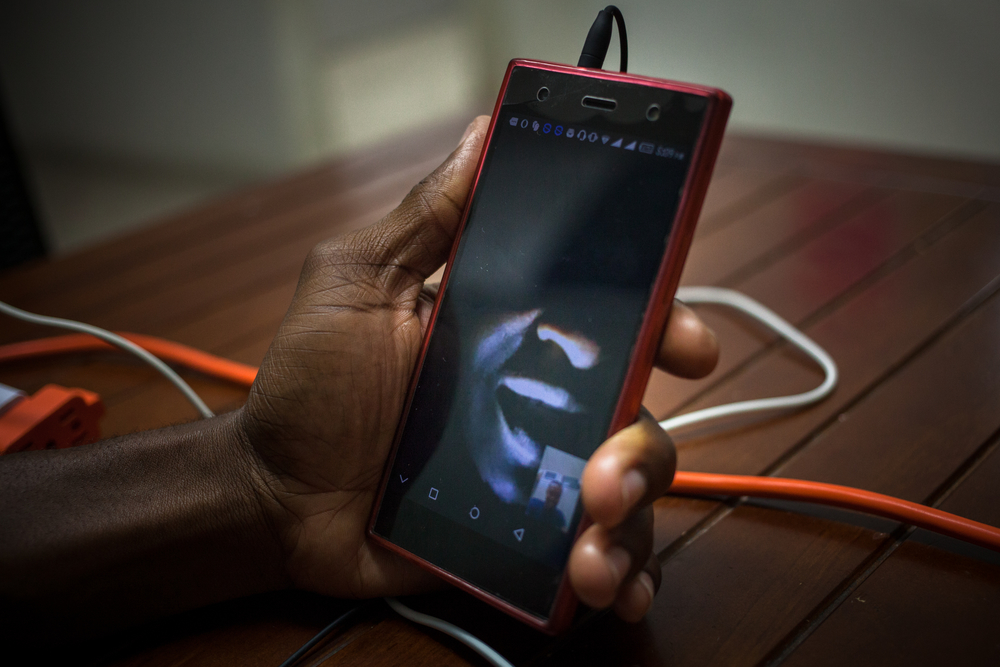 Erika Piñeros/IRIN
Victor, 26, talks to his sister. “Every time they call me, I tell them I’m fine. But if I told them I’m not, they would be sad”.

(TOP PHOTO: Aisha poses for a photo in one of the dresses she brought with her when she fled Congo. Erika Piñeros/IRIN)