Ten years after the Great East Japan Earthquake (GEJE), I have come to understand that the success of the country's risk approach has as much to do with community readiness and human connection as it does with visible feats of structural engineering.

Sitting in my small office in Haiti in March 2011, I read with concern the news coming from the northeast coast of Japan. A massive earthquake had struck offshore, triggering a tsunami of such force that it toppled seawalls and other defenses, washed away entire towns and villages, killed up to 20,000 people, and set off one of the worst nuclear meltdowns in history.

What stood out to me, though, was the minimal damage as a result of the earthquake itself – a 9.0 shake so powerful that it shifted the Earth off its axis by about 6.5 inches and could be felt 230 miles away in Tokyo – a testament to Japan’s long investment in advanced seismic engineering and its strict and rigourously enforced building codes.

At the time, I was working for an international NGO, as part of the relief effort for the far less powerful but far more destructive earthquake that struck Haiti and killed an estimated 200,000 people the year before. Piles of rubble still lined the streets of Port-au-Prince, and people were displaced in makeshift camps all over downtown. Everywhere you turned was a reminder of how poorly prepared the country had been, and how few mitigation investments had been made prior to the disaster – measures that could have saved thousands of lives, and spared immeasurable suffering.

Japan’s experience stayed with me long after I left Haiti and went on to respond to other humanitarian disasters. I’d meet Pakistani families in 2011 who had lost their homes in the country’s worst floods in history, and Filipino fishermen in 2013 who were trying to restore their livelihoods after Typhoon Haiyan washed away their boats and fishing gear.

These disasters were often recurrent and thus predictable, but preparing for what was to come was, for many countries, the exception rather than the rule. The humanitarian system also tended to stay in a cycle of respond and repair, rather than prepare and prevent. Still, I was curious what of Japan’s good practice could be replicated in the countries where I normally worked. These were fragile states – many weakened by years of conflict, frequent disasters, or failed development. They had limited resources, but also little will to invest those resources in the what-ifs.

However, as I would discover after moving to Japan eight years later for a research fellowship, some of the most important parts of the country’s disaster risk strategy don’t require billion-dollar investments at all. They come down to human behaviour and community ties – areas where poorer countries can also excel.

Clearly a rich country like Japan has far more resources to invest in measures to prepare for and mitigate the impact of disasters than a place like Haiti. Its innovations are out of necessity – Japan ranks among the top 10 countries exposed to natural hazards. Located on the so-called Pacific Ring of Fire, it is highly susceptible to earthquakes and tsunamis and has over 100 active volcanoes. Its climate and location in the Pacific Ocean bring regular, intense typhoons and torrential rains that often result in flooding and landslides.

Within days of my arrival in Japan in 2019, I understood that its approach to risk was not just technological, but philosophical, embedded into people’s everyday lives. Part of what made Japan unique was this mindset – instead of viewing disaster risk reduction measures as an expenditure, something that took money away from other needs, it was considered an investment – a way to prevent the arrival of future needs and costs altogether. 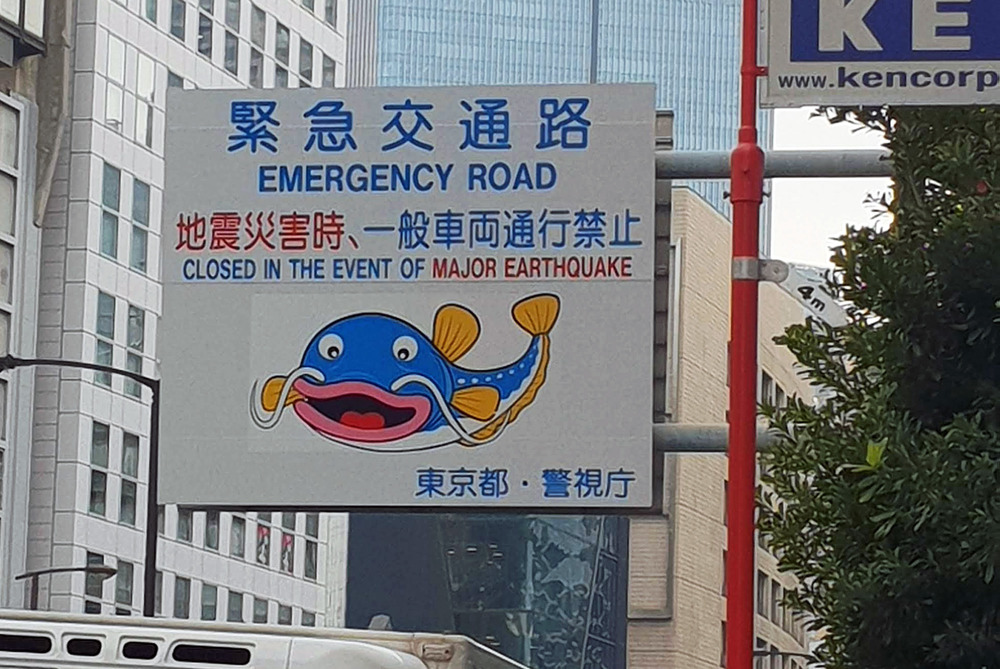 Jessica Alexander/TNH
The Namazu – a Japanese mythological creature thought to cause earthquakes – is used to designate the street as an emergency access road in Tokyo.

An easy walk around my new neighbourhood was an education in what constituted Japan’s “risk society”. The road across from our apartment was marked with a blue catfish, the Namazu – a mythological creature thought to cause earthquakes – designating it as a place exclusively for the passage of rescue vehicles in the event of a disaster. A soothing melody chimed at 5 PM each evening from a nearby loudspeaker, one of hundreds in parks and schools throughout the city. My children were disappointed to learn it was not an ice cream truck, but a way both to mark the end of the day and test the emergency broadcasting system.

When we registered our visas at the municipal office, among the pile of leaflets about our new neighbourhood was an evacuation map indicating where we should go in case of a disaster. A thick manual called “Let’s Get Prepared!” was placed in front of me, featuring an adorable hard-hat-wearing Bosai the Rhino (bosai means “preparedness” in Japanese), who explained everything from how to secure furniture to walls, to how to make a portable emergency toilet. I was impressed.

The investments in structural prevention measures were also unmistakable. The Tokyo skyline seemed to defy the city’s frequent earthquakes, but they were built with seismic activity in mind – some with large reinforcing exoskeletons, others resting on huge ball bearings or with shock absorbers in their foundations, physically isolating them from the ground. Tsunami walls cast long shadows over stretches of coastline, deep concrete embankments lined the many rivers traversing the country, and a sophisticated dam system regulated the fierce rainfall.

While these measures went a long way towards saving lives and protecting assets, they were not infallible. And when they couldn’t hold back nature’s fury, survival came down to human behaviour. Exclusive reliance on structural measures wasn’t enough. Building this “softer side” of prevention – community level awareness about how to avoid risks and take action when those risks turn to real threats – was just as important as any of these engineering feats. 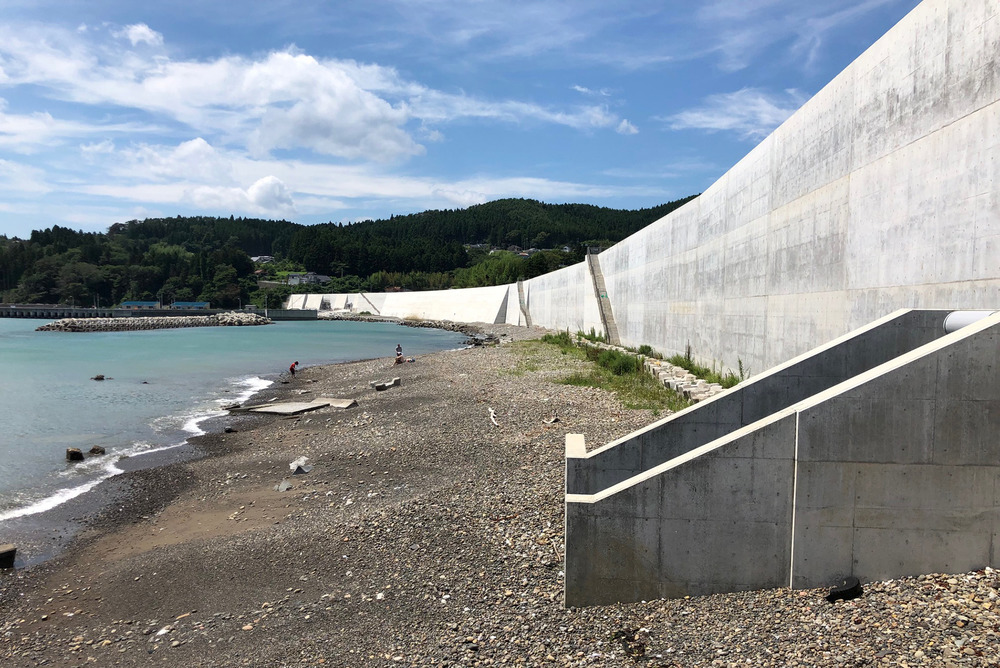 Jessica Alexander/TNH
A tsunami wall in Ofunato, a city along Japan's northeast coast, built after the 2011 Great East Japan Earthquake.

This became clear to me on a trip that summer to a town called Mabi, a lush community situated alongside two rivers in western Japan. The summer before, more than 50 people had died in their homes after days of relentless rain. Embankments meant to prevent flooding around the rivers – the hardware to protect people – had been overwhelmed and breached in eight places, the flood waters rising as high as five metres. I discovered that while people in Mabi may have had hazard maps – like the one I was handed on my first week in Tokyo – many had never taken the time to read them. And while early warnings were sent, they were mainly sent by SMS, and most of the casualties were people over the age of 70 who didn’t own cell phones.

Some residents and aid workers there wondered whether all that engineering and hardware gave people a false sense of safety. With their guard down, people hadn’t felt the urgency to take disaster risk seriously, to study those maps, to make sure people in their towns could evacuate in time should the structural protections fail. Studies from both Mabi and communities hit by the 2011 GEJE found that many people delayed evacuation because they assumed the structures would protect them.

Build on what exists

It seems unfeasible to think a country like Haiti could apply Japan’s level of structural rigour anytime soon. Seismic safety, for example, requires expertise that may not exist, and adds expenses that many homeowners and businesses may not be able to meet. I saw countless people haphazardly slapping concrete over deep cracks in their severely damaged homes in downtown Port-au-Prince after the earthquake. They couldn’t afford to rebuild, so perhaps they convinced themselves that if they couldn’t see the damage, it wasn’t really there.

But while Haiti struggles when it comes to structural outlays, it and other poorer countries can excel at some of the softer areas of prevention. I have seen first-hand the power of community bonds and civic spirit in many of the places I have worked as a humanitarian responder. After the Haiti earthquake, I witnessed an outpouring of initiative and intuition coming directly from affected communities – groups who spontaneously organised to get food and water, medical supplies, and shelter to their neighbours. 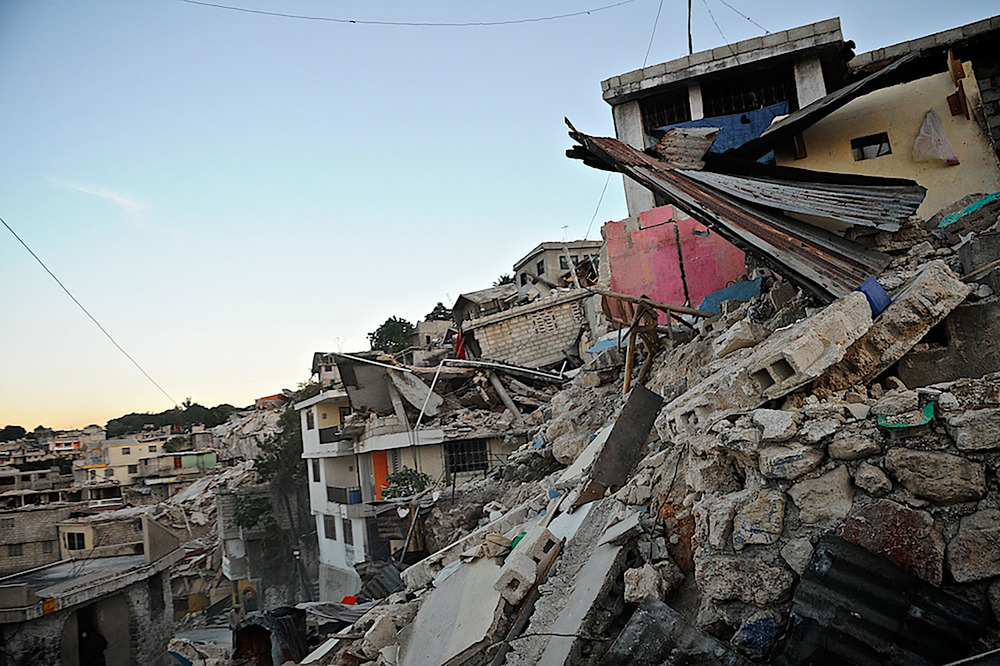 Six years later, when Hurricane Matthew struck, the same was true – Haitians relied on family networks and local forms of solidarity to attend to their basic needs. And it wasn’t just Haiti – after Typhoon Haiyan tore through the Philippines, community members came to the rescue of neighbours and were in many cases the first responders, bringing support more quickly than the government or the international community. In other countries, such as India and Bangladesh, community-based initiatives – from locally managed networks of shelters to search and rescue training to awareness-raising about evacuation – have been credited with saving lives in recent cyclones, along with advances in early warning systems.

And I saw this in Japan too.

Disaster awareness is hardwired into the population from an early age. Built into school curricula since kindergarten, many adults told me that their children were the most risk-informed of all of their family members. September 1 is designated as Disaster Prevention Day – a memorial to the 140,000 estimated victims of the 1923 Great Kanto Earthquake. Along with countrywide emergency drills, survivors of past disasters answered the question, “If you could go back to the day before the disaster, what would you do?”, helping to bring urgency to what otherwise might seem like theoretical preparations.

I met numerous non-profit organisations throughout Japan tackling these softer sides of risk reduction. One was busy organising training sessions across the country, using coloured markers and post-it notes to map hazards and the homes of the elderly and disabled, and learning how to rescue people from buildings using everyday appliances. Others organised exchanges between people recently affected by crisis and those in other communities facing similar risks, helping to turn what might be an abstract threat into a real one. To build the social cohesion exhibited during the GEJE – where neighbours, volunteer firefighters, and family members went door to door warning and rescuing people – some groups set up dialogues and events, laying the groundwork for stronger community connections when they’d be needed most.

After my year in Japan, I could see that it would take years for many countries to replicate some of the technological advances and expensive, visible outlays it had implemented for much of its modern existence. But what surprised me was the power of these local, community-driven networks. And in this realisation, I could see an opportunity for poorer countries. Rather than emphasising what these countries lack, governments and the aid sector would serve them better by recognising and supporting the capacities inherent within their own communities – efforts that could be made at little cost.