Some restrictions of a 21-day lockdown that began last month to contain the spread of coronavirus in Zimbabwe are being eased, as the government tries to offset the impact of its stay-at-home order on a struggling economy and a deepening food crisis.

The lockdown, ordered on 30 March, restricted movement to visits to supermarkets and pharmacies within a five-kilometre radius of people’s homes and closed cheaper public markets – key for traders and most consumers alike.

President Emmerson Mnangagwa this week allowed the reopening of markets, relieving some of the hardship felt by small-scale traders and farmers. The move followed an outcry after footage of police officers seizing and destroying vegetables circulated on social media.

The government also announced on Monday that money transfer agencies, previously closed, would be allowed to open three times a week – a belated acknowledgement of the vital role remittances play in keeping families afloat. The Reserve Bank of Zimbabwe had earlier suspended a ban on the use of the US dollar for general transactions.

Zimbabwe has so far recorded 11 confirmed cases of coronavirus and three deaths – although there has been very little testing.

In enforcing coronavirus restrictions on movement and gatherings, the security forces had by last week arrested more than 485 people. Human rights groups have condemned what they described as police brutality, but also questioned the rationale of keeping people they had picked up in crowded detention centres.

COVID-19 could not have come at a worse time for Zimbabwe. Its health system is barely functioning, its economy is in turmoil, and food shortages are affecting 7.7 million people – more than half the population – aid workers warn.

On top of general shortages there are 18-hour power cuts and taps that have been dry for years as a result of drought and the lack of maintenance of the water system.

This week, three residents’ associations in the cities of Harare, Masvingo, and Chitungwiza went to court to demand that the authorities provide clean water. Residents are spending hours in queues at boreholes when they are supposed to be home observing social distancing.

“The conditions for rapid spread of COVID-19, certainly in townships in urban centres, are all there,” warned Zimbabwe-watcher Ian Scoones at the Institute of Development Studies.

“For pandemic preparedness planners, this is a recipe for a major disaster,” he added.

Successive drought-related poor harvests and hyperinflation at more than 540 percent have combined to push the price of food beyond the reach of most families. 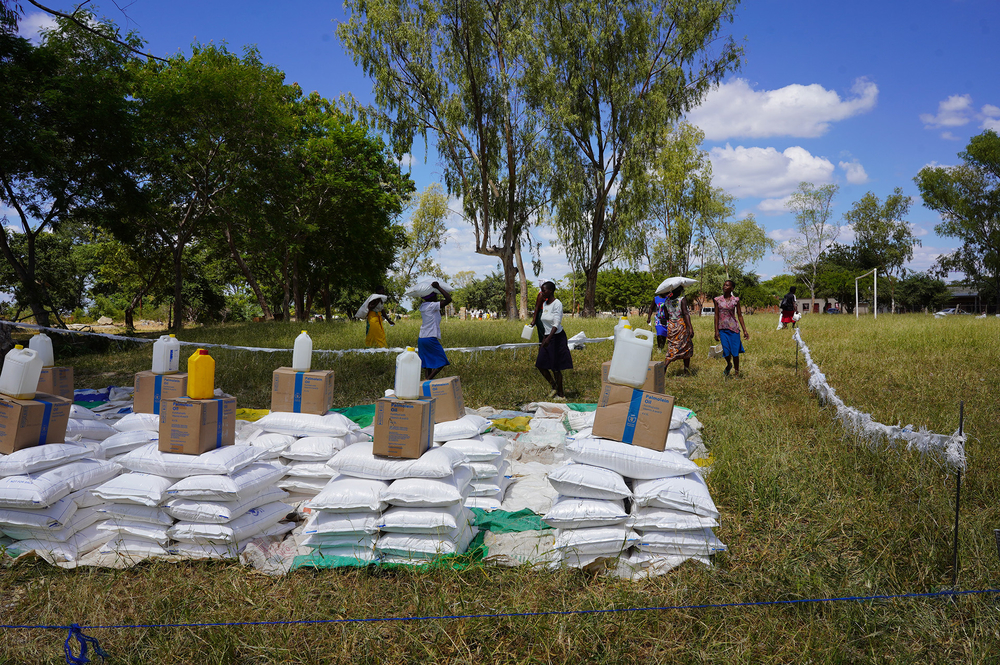 Cereal production last year was half that of 2018, and less than half the national requirement. The 2020 harvest “will be even poorer”, the World Food Programme said in a press release this week.

“With most Zimbabweans already struggling to put food on the table, the COVID pandemic risks even wider and deeper desperation,” noted Eddie Rowe, WFP’s country director. “We must all do our utmost to prevent this tragedy turning into a catastrophe.”

Coronavirus has also exposed the weakness of Zimbabwe’s healthcare system after years of underfunding. Junior doctors and nurses went on strike last month as the country recorded its first COVID-19 case in protest over the lack of protective gear – and they have not returned to work.

“With most Zimbabweans already struggling to put food on the table, the COVID pandemic risks even wider and deeper desperation.”

“Doctors have simply taken the social responsibility measure of minimising contact and practicing safe distancing as they have not yet been equipped,” Zimbabwe Hospital Doctors Association Vice President, Masimba Dean Ndoro, told The New Humanitarian.

The doctors had only returned to duties in January after a four-month strike over pay and the lack then of even basic supplies like syringes and bandages. It ended when telecommunications tycoon Strive Masiyiwa stepped in to provide 2,000 doctors with a monthly subsistence allowance of $300 to help with transport and living costs.

Zimbabwe, like other African countries, has received 20,000 test kits, 100,000 face masks, and 1,000 protective suits from the Jack Ma Foundation. It is not clear how quickly they can be distributed.

“I understand that donations have started to come [including from the Foundation] but stocks remain inadequate,” said Adrian Nyaguse, spokesperson for the Zimbabwe Senior Hospital Doctors Association.

In the meantime, universities with engineering and technology expertise have been called on to help manufacture hand sanitisers, masks, and gloves.

The government has been sharply criticised domestically for its lack of coronavirus preparedness. Although it has identified hospitals that can serve as isolation centres, and they are being renovated with the help of the Chinese government and Zimbabwe’s private sector, the country is short of testing capacity.

Patients requiring critical care are being referred to Zimbabwe’s main hospitals. But the country’s two largest public hospitals, Parirenyatwa and Harare Central Hospital, have a combined total of 19 ICU beds – and that figure reportedly fell to just five at the end of last year as a result of equipment shortages.

The health emergency is an indication of a deeper crisis. The economy shrunk by eight percent last year, and the IMF is predicting essentially no growth this year, with rising inflation and a devaluing currency – a forecast made before COVID-19 hit.

The IMF’s latest report outlines the dilemma: efforts to contain and treat coronavirus will require urgent health-related social spending, but that will delay the budget-cutting reforms donors are demanding before they provide much-needed financial support.

Finance minister Mthuli Ncube said Zimbabwe will spend a total of $24 million on cash transfers to one million vulnerable households over the next three months. That translates to $8 per month per household.

Over 90 percent of employment is generated by the informal sector. With next to no prospects of formal work, it is a lifeline for Zimbabweans – from retrenched professionals to retirees, and youths entering the job market for the first time.

But it is a precarious living. A poverty assessment by the government and aid agencies in August found that 77 percent of urban families could not meet their food needs.