Loveness January lost her three cattle and half her crop to last year’s drought, and fears another poor season will mean ruin for her family farming a small plot of land in Seke, 40 kilometres southeast of the Zimbabwean capital, Harare.

“If the rains don’t come we will suffer,” she said simply. “There is nothing more we can do – we need help.”

Drought and an economic meltdown have combined to push Zimbabwe to the brink of humanitarian catastrophe, aid workers warn, with levels of hunger rarely seen outside of war zones.

By early next year, some eight million people – half the population – will be short of food.

A series of interviews and visits to urban and rural parts of Zimbabwe this month by The New Humanitarian confirms the grim mood of official reports and warnings from aid agencies and local media.

In the countryside, after a season of poor rains, 5.5 million farmers – some of whom suffered total crop failure – will struggle to find food. In urban areas, where an inflation rate of 300 percent is forcing the poorest to survive on just one meal a day, 2.2 million people are affected.

“The numbers in need could easily climb well beyond six million in the rural areas by next year, and we could also see an increase in the urban areas,” World Food Programme country director, Eddie Rowe, told TNH.

The crisis is exacerbated by a formal employment rate of just 10 percent, an indebted government that is struggling to provide basic services, perennial shortages of fuel and foreign exchange, and regular 18 hour power cuts.

This briefing looks at the shortages of food, water, medical care and other services faced by Zimbabweans, and the challenges the government and aid agencies will face in the new year and beyond.

Watch for our in-depth coverage from Zimbabwe in early 2020.

How bad was the drought?

The 2018/19 rainy season was the driest in 40 years. The maize harvest was more than 50 percent down on 2018, and large-scale livestock losses mean households, like January’s in Seke, are deprived of key assets.

WFP estimates that 4.1 million people will be in urgent need of food aid by January. That includes 1.2 million mainly in northern districts bordering Zambia and Mozambique who have a food security classification of IPC 4 – emergency levels more often associated with conflict.

Consecutive droughts have sapped people’s ability to bounce back. In 2015, poor rains left 30 percent of rural people food insecure; in 2016 the number hit 42 percent; in 2018 it rose to 51 percent; and this year it has reached 59 percent – a sign of the growing impact of climate change.

Then there was the shock of Cyclone Idai, which tore through eastern Zimbabwe in March, directly affecting 270,000 people.

Next season is expected to be dry again, with forecasts predicting below average rainfall through to March.

How will the food shortages be addressed?

WFP had originally planned to reach 2.7 million people from January to April 2020. That was predicated on a government commitment that it would feed an additional three million people.

But doubts over the government’s ability to meet that pledge have led WFP to expand its intervention to 4.1 million people, aid workers told TNH.

Scaling up so rapidly will be a challenge, Rowe acknowledged. “Reaching 4.1 million by the end of January is going to be tough,” he said. “We’ve bought in additional staff to help us get to that target.”

There is also a logistical problem. Zimbabwe’s banning of US dollar transactions and soaring inflation means that cash as aid is no longer viable. So, assistance must take the form of traditional in-kind aid – sacks of maize and bottles of cooking oil.

But after the drought there is little spare maize in the region. Zambia, the usual go-to country for food aid, has banned exports. Shipments from Mexico, another regular supplier, are months away in terms of transport time. 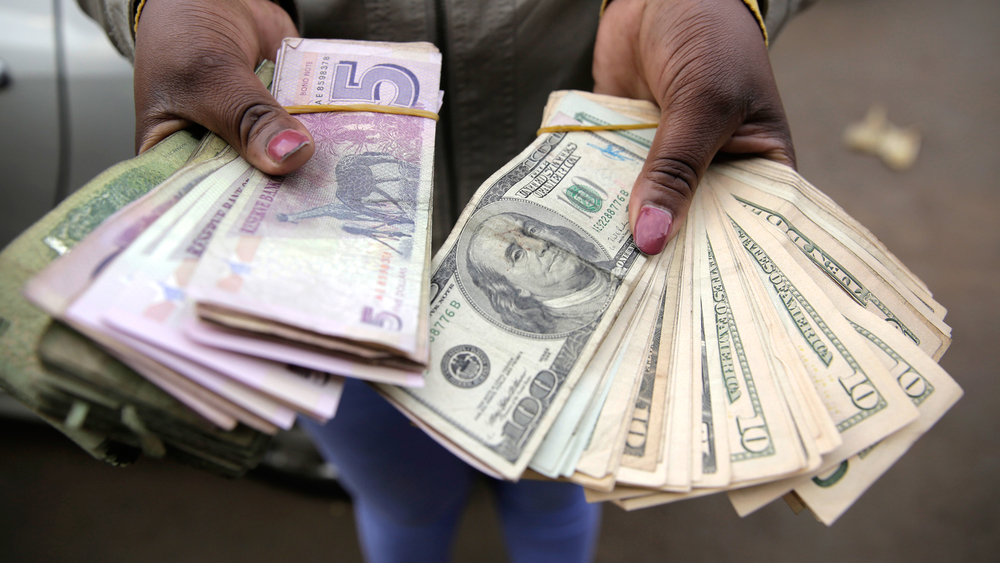 Aaron Ufumeli/TNH
Zimbabwe banned the use of the US dollar in June with the launch of a new local currency - but that is depreciating and the country is unofficially "redollarising".

A further complication is that Zimbabwe will not accept genetically-modified maize. An alternative under consideration is GM maize from South Africa that has been milled and cannot propagate.

Zimbabwe is negotiating the purchase of 17,000 tons of maize from Tanzania, with the transport of the first tranche of 7,000 tons underway. But “questions around the government’s ability to import sufficient grains to fill the gap” remain, the WFP noted in a recent briefing.

What’s happening in towns and cities?

An urban poverty assessment by the government and aid agencies in August surveyed close to 11,000 households and found that 77 percent could not meet their food needs.

In all but one of Zimbabwe’s nine provinces, incomes were less than the poverty line, and 38 percent of all families were in debt. Typically, money was owed on rates to city councils and rents, with the resultant threat of evictions.

GDP growth in Zimbabwe contracted by 7.5 percent in 2019, which has had a knock-on effect on a cash-strapped government’s ability to provide social services – from health, to education.

To win international backing, the government has instituted belt-tightening reforms. In June, Finance Minister Mthuli Ncube abruptly ended a multicurrency regime in place for over a decade and decreed the new Zimbabwe dollar as the country's sole legal tender – which began to depreciate almost immediately, further pushing up inflation.

As a consequence of deepening poverty, aid agencies are warning of a potential rise in child trafficking, early marriage and transactional sex, and fear a rebound of HIV. School-aged girls are particularly at risk of being pulled out of school to help support their families.

A reversal of internal migration patterns is also underway, with people leaving towns and cities for the rural areas where life is cheaper.

Are drought and the lack of food the only elements to the crisis?

No, this is more than a food emergency. Junior doctors in Harare’s public hospitals have been on strike since September, demanding their salaries be pegged to the equivalent of $1,500 a month – a walkout that shows no sign of ending and is impacting people’s access to health care.

The government can solve the salary issue, a senior doctor at one of the main hospitals explained, “but it fears the ripple effect – if it adjusts for one class of worker it will cascade down and will mean a much bigger civil service budget.”

Senior doctors and consultants are providing a skeleton service – usually one doctor for each specialised unit – and respond to acute emergencies. Nurses, although not officially on strike, do not always show up for work. 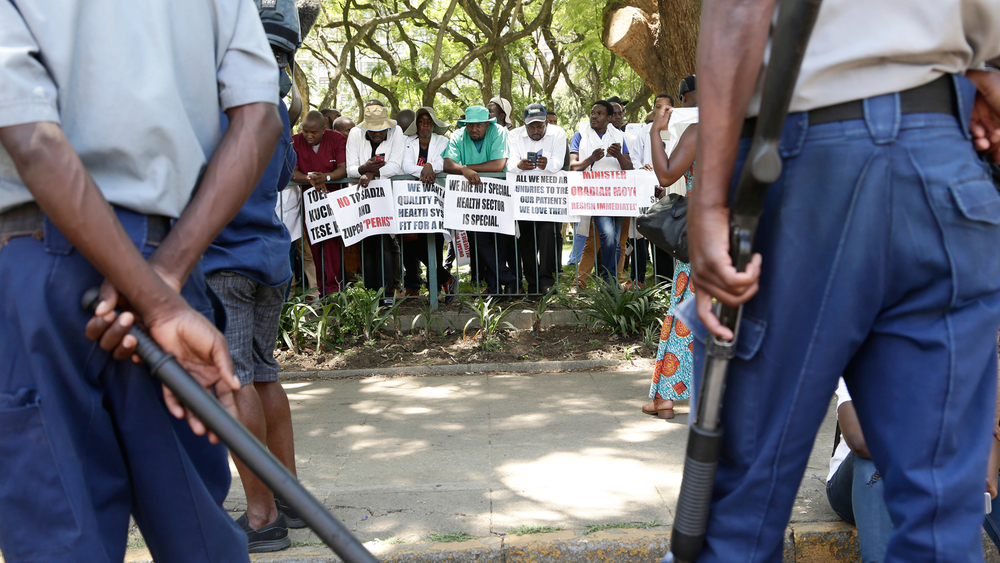 Aaron Ufumeli/TNH
Junior doctors have been on strike for three months demanding better pay and conditions - a walk out that has virtually closed public hospitals.

The problem goes beyond salary. “It’s also about equipment,” one junior doctor protesting outside parliament told TNH. “There is nothing to use to help the patients – nothing is working. It’s almost as if they were staying at home, there is no medicine, no equipment.”

Water and sanitation services are also crisis areas. Harare citizens don’t have clean water because the city can not afford the chemicals needed to treat it — though taps also regularly run dry. People have resorted to digging shallow wells on their property and are increasingly turning to open defecation as there is no water to flush toilets.

As leaking sewer pipes go unrepaired, fear of a cholera outbreak is growing. Last year, there were more than 10,400 cases and 59 deaths before the epidemic was brought under control.

Is there help for the poorest?

A pilot urban social safety net programme funded by the UK government is an exception to in-kind aid, using mobile money transfers. It aims to reach 100,000 people “at-risk” and could be extended to 200,000 if more financing is found.

Epworth, a once informal settlement 12 kilometres from Harare, is one of eight communities where the programme is being rolled out. Poverty levels there are among the worst in the country, with roughly half the population “cereal insecure” – meaning they can’t afford even plain maize. Some 4,000 households will receive the equivalent of $9 per family member a month, via a mobile money platform.

But even here, there are hurdles. One problem is the high transaction fees charged by retailers to convert the digital cash. The premium is at least 25 percent, and to purchase some demand-heavy commodities like maize meal, it can be as high as 40 percent.

Yet the small payments make a difference. Naume Tawawa’s husband works as a market porter in central Harare, and the family could hardly afford to feed their five children and keep the three youngest in primary school. The $64 she gets “helps substantially”. She can now afford more and better food, and sanitary products for her older daughters.

But “Epworth is no longer an isolated slice of poverty,” said Amnesty International country director, Jessica Pwiti. “There are Epworths all over Zimbabwe.”