Efforts to aid nearly 900,000 people who have fled recent violence in northwest Syria are “overwhelmed”, as many newly displaced people from Idlib province sleep out in the open or shelter from frigid temperatures in muddied tents and unfinished buildings.

UN displacement numbers have been rising steadily towards 900,000 since 1 December, when the Syrian government and its Russian allies escalated their campaign to take back Idlib and the surrounding areas from rebels.

In total, the UN says more than one million people have been displaced within the northwest since the fighting began in May, although exact statistics are hard to come by. Prevented from entering the heavily guarded border with Turkey, many are fearful of returning to parts of the country either under bombardment or now controlled by forces loyal to President Bashar al-Assad.

Aid is coming in through the border with Turkey, and a UN spokesperson told The New Humanitarian that the UN and its partners are “working around the clock to address the increasing needs”. But hundreds of thousands of people are not in formal camps – taking shelter wherever they can find it – and may not be getting the help they need.

Both aid workers and newly uprooted people told TNH that many of those fleeing in the northwest had not yet received assistance, and are huddling together in overcrowded tents, with some burning garbage or their own belongings to stay warm. 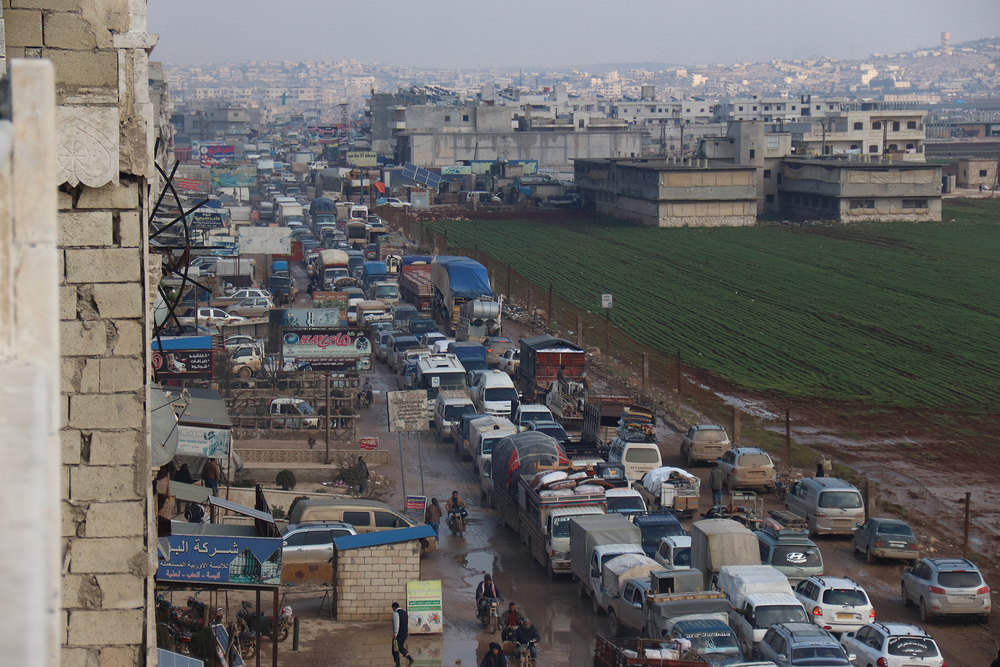 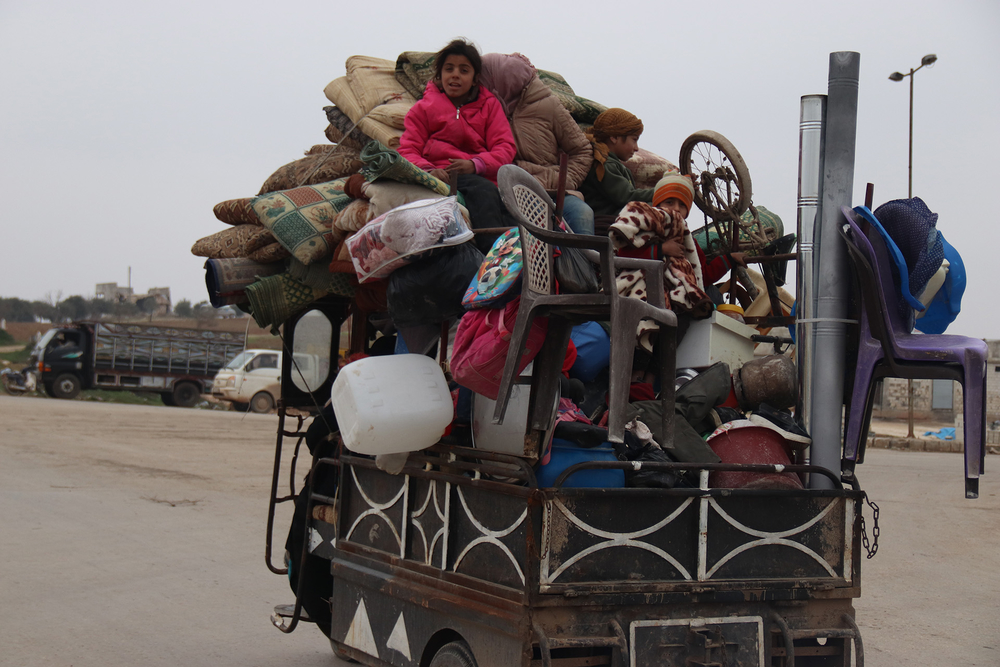 Muhammad Al Hosse/TNH
Many of the displaced are taking everything they can with them, unsure if they will ever be able to return home.

Speaking to the UN Security Council on Wednesday, UN relief chief Mark Lowcock said “the aid effort is overwhelmed”, and announced that he would soon ask for an additional $500 million to respond to what he called a “humanitarian catastrophe”.

This money is unlikely to come soon enough to help people like Abu Yusuf, who fled his home in rural southern Idlib for a makeshift camp near the Turkish border a few weeks ago, with no income or provisions.

His family of 10 are crammed into one tent along with around 100 other people from the same town. He sent TNH photos of himself in a muddy stretch of tarp-covered tents strewn with the belongings the group could carry with them: plastic shelves, clothing, stacks of pots and pans.

Speaking by phone, Abu Yusuf said residents of the camp were still waiting on deliveries of food or water, and he described conditions as catastrophic. “The campground is just mud. The streets are mud,” he said. “We are waiting for death.”

Despite repeated calls from the UN’s envoy to Syria and others for a ceasefire, there is no sign that the offensive is coming to an end.

Last week saw al-Assad’s government retake control of the strategic M5 highway that runs through Idlib and links Damascus to Aleppo, marking the first time since 2012 that Syrian government forces have held the vital route.

Government troops and rebels – now dominated by the hardline Islamist group Hayat Tahir al-Sham – had been kept apart by a ceasefire and “buffer zone”, but those collapsed in late April. More than 1,700 people – including some 500 children – have been killed since then, according to the UN.

Many people in Idlib fled other parts of Syria as they were retaken by the government during the country’s nearly nine years of war, finding shelter in rental homes and in the displacement camps that dot the northern border areas. Some also attempted the dangerous and expensive smuggling route into Turkey, in a failed bid to escape. 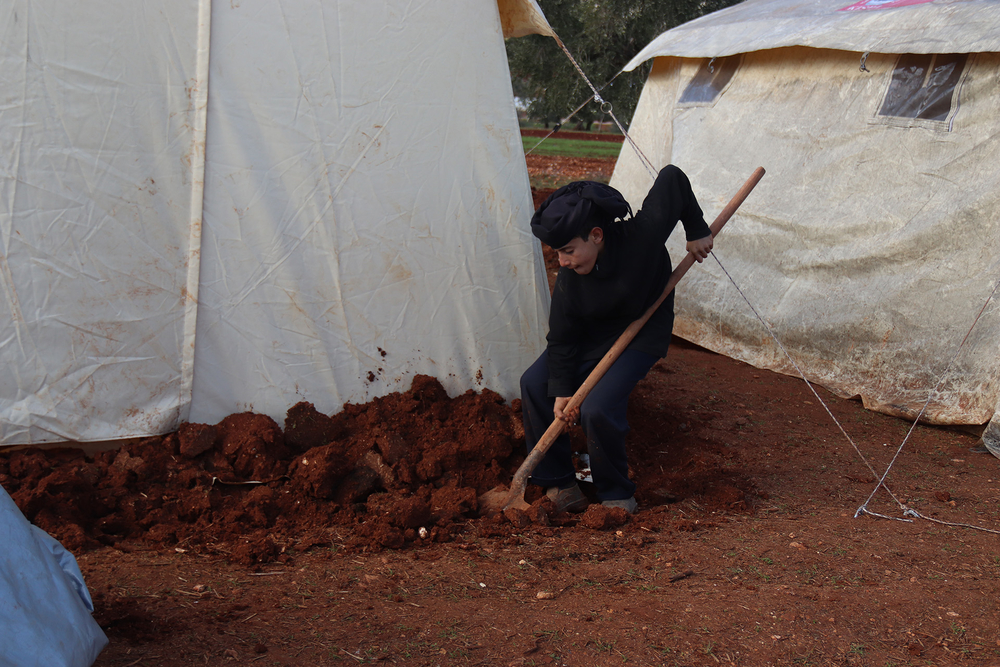 Muhammad Al Hosse/TNH
While hundreds of thousands of people have taken shelter in official camps or rented accommodation, others are staying at smaller makeshift camps like this one at Sarmada, near the border with Turkey.

But now there appears to be nowhere else for them to run, and aid can’t keep up with the sheer numbers of people who need it.

David Swanson, the UN’s regional spokesperson for the Syria crisis, told TNH that “a massive humanitarian operation is underway”, including trucks of aid from Turkey carrying food, shelter, water, sanitation and hygiene materials, and other assistance.

But not everyone has been reached.

UN statistics show that, as of last week, 174,000 people were living with host families, 140,000 in official camps, and 128,000 in rented accommodation. That leaves hundreds of thousands of people in unfinished buildings, individual tents, out in the open, or in makeshift camps without any real infrastructure. Some of these camps, like the one where Abu Yusuf is staying, were hastily built with the help of whatever funds local communities could provide, and are likely to have a limited NGO presence.

UK-based aid organisation Save the Children reported this week that seven children had died due to “horrific” living conditions in makeshift camps set up for those fleeing recent bombs. The youngest was just seven months old. They were reportedly killed by asphyxiation and fires in tents improperly protected against the rain and cold, and by freezing to death. In one photo shared widely across social media last week (that TNH could not independently verify), a grandfather and his family lay dead in a tent, reportedly asphyxiated by a fire they lit to keep themselves warm.

“People are dying in these camps.”

“These are new camps, where people who just recently fled are taking shelter,” said Ahmad Arafat, a local director for the Syrian aid group Hurras Network, which operates on the ground in Idlib and coordinates with Save the Children. He had visited the camps last week.

They “aren’t prepared to take people in”, Arafat told TNH by phone. “Some of them were simply set up by local residents themselves. They are makeshift camps, unorganised.” Fuel for heating is in short supply, he said. Even when it is available, it is often sold for high prices that most residents who have recently fled their homes cannot afford.

“People are dying in these camps,” Arafat said.

The situation is made worse by the fact that local aid workers are among those in danger and displaced, making relief efforts even more difficult, according to Kutaiba Sayd Issa, general manager of Violet, a Turkey-based aid organisation that operates in northern Syria.

“We don’t know if they can help provide for the [displaced] people in general or just for their families,” Issa said.

The UN’s Swanson said the relief operation is saving lives but is “overwhelmed by the sheer gravity of the crisis”, reiterating the impact that the displacement of local aid workers was having on the response. At least three Syrian aid workers were killed this week, including one in Idlib. 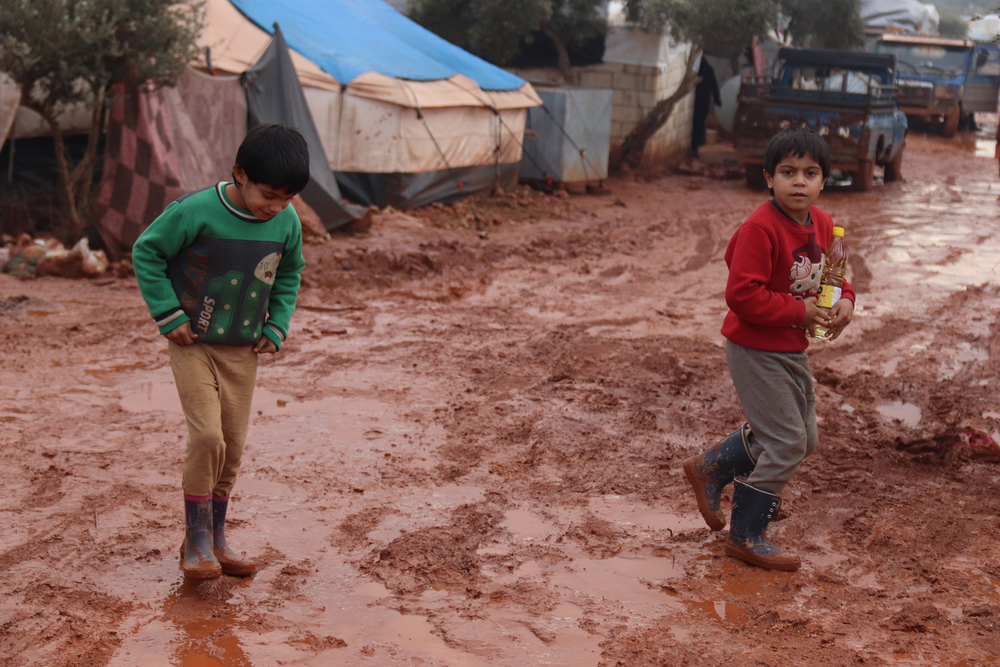 Muhammad Al Hosse/TNH
Some makeshift settlements are not able to sufficiently protect residents against the wet and cold winter weather, and several children are already reported to have died due to what Save the Children called "horrific" conditions.

While the UN asks for more money, and trucks continue to cross the border with supplies, citizens have become aid workers but are left waiting.

Ibrahim Abu Ahmad, a father of five from southern Idlib who fled with his family earlier this month, described “tragic” living conditions in the informal displacement camp 20 kilometres from the closed Turkish border where he and his family have taken shelter.

The other residents elected him camp director, but he said his attempts to reach out to aid organisations for support had yielded little.

“Yesterday, a team of aid workers came and gave some winter coats to the children,” Ahmad told TNH by phone. But the supplies weren’t enough for all of the children in the camp.

“Life here is very difficult. I can’t find any [paying] work. There is very little food and water; no other clothing [donations]. There aren’t proper toilets. There is no schooling; no mosque; no aid supplies.

“There are children crying for a biscuit, for a bit of food, and their parents have nothing.”