On 7 May 2018, Niger deported 135 Sudanese from the migration hub of Agadez back across the border to Libya in a move denounced by critics as a violation of international law.

A year on, 10 of those sent back are reported to have died trying to cross the Mediterranean, the fates of the others are unknown, while 1,500 Sudanese migrants and asylum seekers remaining in Niger are living in a desert camp with no clear view of their future.

At the time of the deportation – the first of its kind from Agadez – Niger said the Sudanese it returned were “criminals” who had been fighting with militias in southern Libya. They were among 1,900 Sudanese in Agadez who said they had travelled to Niger to escape enslavement, torture, extortion, and violence in Libya.

But they received a cold reception due to suspicion from their Nigerien hosts and fear that their arrival was the first sign of an impending exodus of vulnerable people from Libya.

Now, as conflict worsens in Libya there are fresh concerns that more people will spill over the border, creating further problems for a country that has seen an uptick in militant attacks and tens of thousands of its own people forced to flee their homes by violence in the last year.

Rights groups decried last year’s deportation as a violation of non-refoulement – the international law that prohibits states from sending refugees and asylum seekers back to countries where they may be unsafe. The UN’s refugee agency, UNHCR, has flown more than 2,780 people in the opposite direction – from Libya to Niger – to get them out of harm’s way since 2017.

According to several Sudanese still in Agadez and Jérôme Tubiana, a migration adviser with Médecins Sans Frontières, at least 10 of the deportees died in a January migrant shipwreck off the coast of Libya in January, although UNHCR said it has not been able to confirm this account.

Some 1,500 Sudanese now remain in Agadez. Since the deportation, several hundred left of their own accord, 31 were transferred to Italy as part of a humanitarian evacuation, and the government of Niger has decided to allow those still in the city to apply for asylum.

But so far only six unaccompanied Sudanese children have been granted refugee status in Niger. According to UNHCR, the slow pace of the process is due to time-consuming security screenings and the high level of displacement from militant activity along Niger’s borders with Mali and Nigeria.

Asylum seekers say the long wait in austere conditions, uncertainty about the future, and effects of past traumas – many have been through multiple countries and dangerous journeys  – have led to severe psychological strain, with UNHCR confirming that at least three people in the desert camp have attempted suicide since last September.

“A year and a half we’ve been waiting,” said Adam, a 33-year-old Sudanese asylum seeker in Agadez whose name has been changed because he did not want to harm his application. “This situation isn’t humane.” 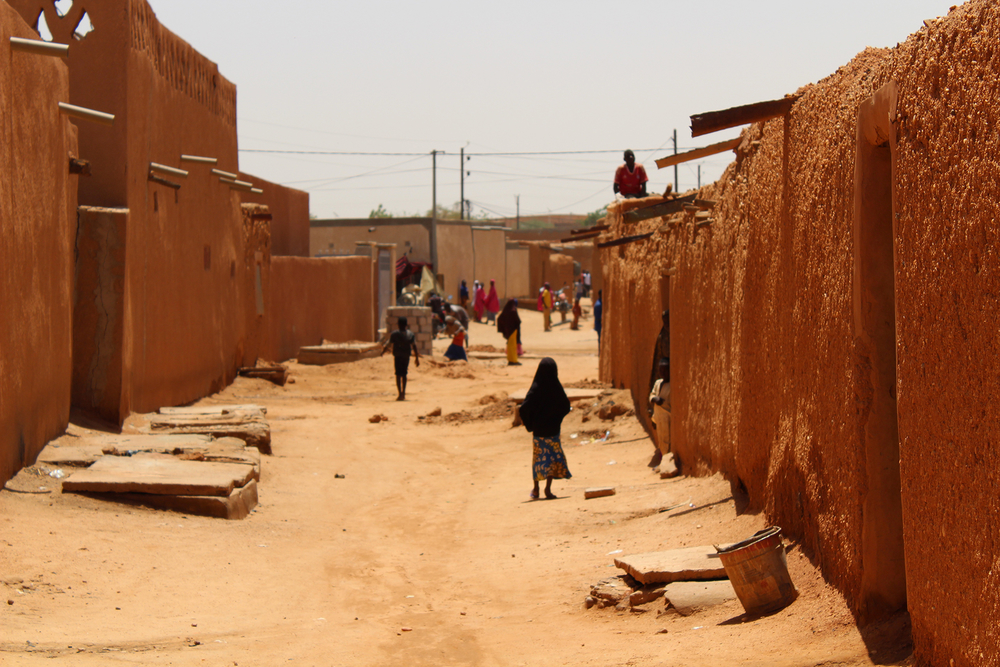 Louise Donovan/UNHCR
Located in central Niger, Agadez has long been a staging point for migrants and refugees traveling within Africa and onwards to Europe.

Sudanese initially began trickling into Agadez in late 2017. Their unexpected arrival marked the first time since the fall of Libyan dictator Muammar Gaddafi in 2011 that people were moving south from Libya in search of protection, instead of north to cross the sea to Europe.

Caught off guard, UNHCR initially didn’t have enough resources to accommodate them or a plan in place about how to manage the situation. When housing in the city centre filled up, asylum seekers began sleeping in the streets.

Tensions arose with locals who accused the Sudanese of committing petty crimes, polluting the streets, and intimidating local women. The Nigerien government also accused the asylum seekers of belonging to armed groups from Darfur and viewed them as a security threat.

“We know that these people are fighters,” Mohamed Bazoum, Niger’s minister of interior, said last year.

However, the Sudanese themselves say they are asylum seekers who were displaced years ago by the conflict in Darfur. They say have been forced to travel far and wide in search of safety and economic opportunity, as conditions in camps for internally displaced people in Darfur remain unstable and aid has dried up in neighbouring countries.

After ending up in Niger, they found their path across the Mediterranean largely closed off by European efforts to curb migration – including deals to prevent departures from the Libyan coast. Many complained of abuse and discrimination in Libya and said conflict in the country had made their stay there increasingly dangerous.

As for the Nigerien government’s claims that they are fighters, Tubiana said these are baseless: “These people came to Niger as civilians without weapons.”

The situation in Agadez came to a head on 2 May last year with the arrest of around 160 asylum seekers. Five days later, 135 were deported.

The long wait for asylum

After the deportation, UNHCR worked to prevent anyone else from being sent back across the border to Libya, launching a project to defuse tensions with the local population and opening a camp in the desert 15 kilometres from Agadez that it called a “humanitarian centre”, where most of the Sudanese now live. It also persuaded the Nigerien government to start accepting asylum requests from the Sudanese, starting last July.

But despite these changes, the vast majority of Sudanese asylum seekers in Niger have seen no progress in their asylum processes and are uncertain what the future holds.

People living in the humanitarian centre described it as a collection of prefabricated buildings in the sand with little protection from the harsh environment, and complained of a lack of adequate medical care, poor food quality, and no opportunity to work.

“Yesterday one of the refugees tried to commit suicide.”

Mohammad, a 37-year-old asylum seeker, wrote in February that “the situation in the camp is not good. Many of the young men became sick with various mental illnesses.”

“Yesterday one of the refugees tried to commit suicide… One of the [other Sudanese] young men saved him,” he added a week later.

UNHCR said it is setting up programmes through two non-governmental organisations to address the psychological needs of asylum seekers in Agadez.

While they wait for their asylum requests to be processed, hundreds of Sudanese have opted to leave the country on their own. But Niger’s neighbours offer few good options: Algeria has deported more than 25,000 sub-Saharan Africans to Niger in the past year; many of the Sudanese already have first-hand experience of hardship in Libya, where migrants and asylum seekers have been severely affected by the latest flare-up of conflict; and it is still unsafe for Darfurian refugees to return to Sudan.

“A lot of the people are very stressed out because they aren’t getting refugee status,” Hassan, a 31-year-old Sudanese asylum seeker, said over the phone, preferring to only give his first name. “That’s why people are deciding to leave… The young men are leaving this place – this hell we’re living in.”

“The fear of a ‘pull factor’ triggering massive flows should definitely not be the alpha and omega of all refugee and asylum policies in the region.”

According to MSF’s Tubiana, the absence of a long-term solution for the Sudanese is a deliberate strategy on the part of Nigerien authorities and UNHCR to avoid attracting more people to Agadez.

“The fear of a ‘pull factor’ triggering massive flows should definitely not be the alpha and omega of all refugee and asylum policies in the region,” Tubiana said. “Playing time in the hope discouraged people would leave by themselves should not be an option.”

In response to this claim, a UNHCR spokesperson said that Niger is “accepting asylum claims from all asylum seekers, and has consistently maintained open borders to those fleeing conflict,” adding that, given mass internal displacement, evacuations from Libya, and violence in Mali and Nigeria, “the processing of asylum seekers can take time”.