Niger has deported at least 132 Sudanese refugees and asylum seekers back to Libya, drawing criticism that it is flouting international law by sending them back to dangerous and inhumane conditions from which they recently escaped.

The deportation, the first of asylum seekers from Niger’s migrant hub of Agadez, was confirmed by a high-ranking UN refugee agency (UNHCR) official, and later by an informed source in the Nigerien interior ministry who insisted those sent back were “criminals” fighting for militias in southern Libya. UNHCR put the number at 135, but the interior ministry said three people had escaped.

UNHCR said those deported were part of a group of around 160 Sudanese refugees and asylum seekers arrested in Agadez on 2 May. The majority fled to Niger to escape harsh conditions and treatment in Libya and were receiving assistance from UNHCR. 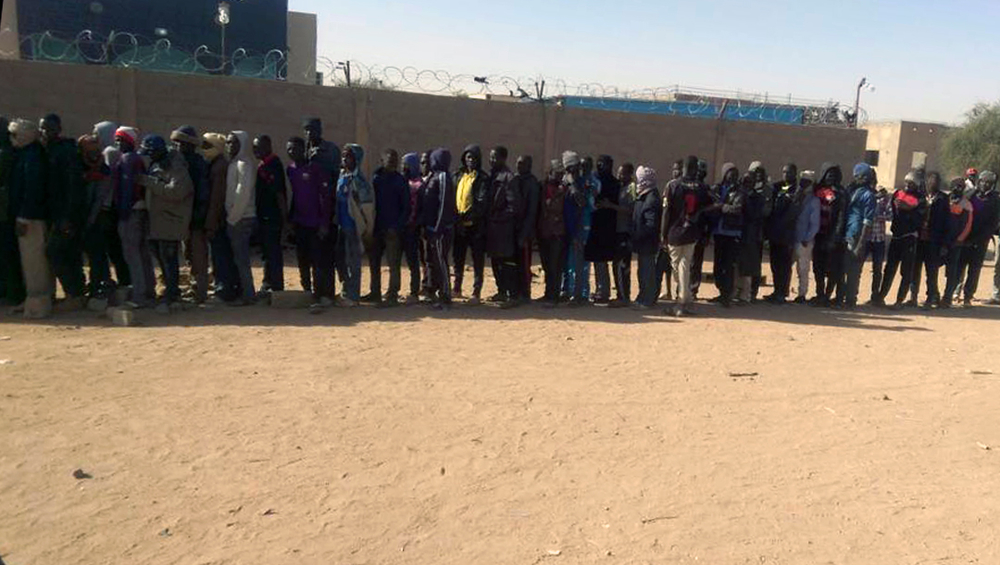 Sudanese refugees waiting to be loaded into trucks to be deported to Libya.

The Sudanese men were deported across the land border into the south of Libya on Wednesday or Thursday, and their current whereabouts are unknown, according to the UNHCR official. Prior to the deportation, UNHCR secured the release of women and children, and several other people escaped.

One of those arrested on 2 May was a 58-year-old Sudanese asylum seeker whom IRIN met during a visit to Agadez in March. His current whereabouts are unknown, but communicating from prison before the deportation via text message, the man, who asked for his identity to be withheld due to the ongoing risks, said those arrested were held for several days without food.

On 7 May, several large trucks entered the prison. When the Sudanese resisted orders to board the trucks, the police beat them, according to people who escaped who communicated with IRIN via text message. Three men were taken to the hospital due to the severity of their injuries.

The trucks departed in the direction of Madama, a desert outpost close to the Libyan border and some 900 kilometres, or two to three days of gruelling travel, from Agadez.

On 9 May, IRIN received confirmation from the senior UNHCR official that the 135 Sudanese who were in the trucks had been deported to Libya.

“We deported a group of criminals who had been part of the militias fighting in southern Libya for security reasons,” the Niger interior ministry source told IRIN. “They had no status as political or humanitarian refugees.” 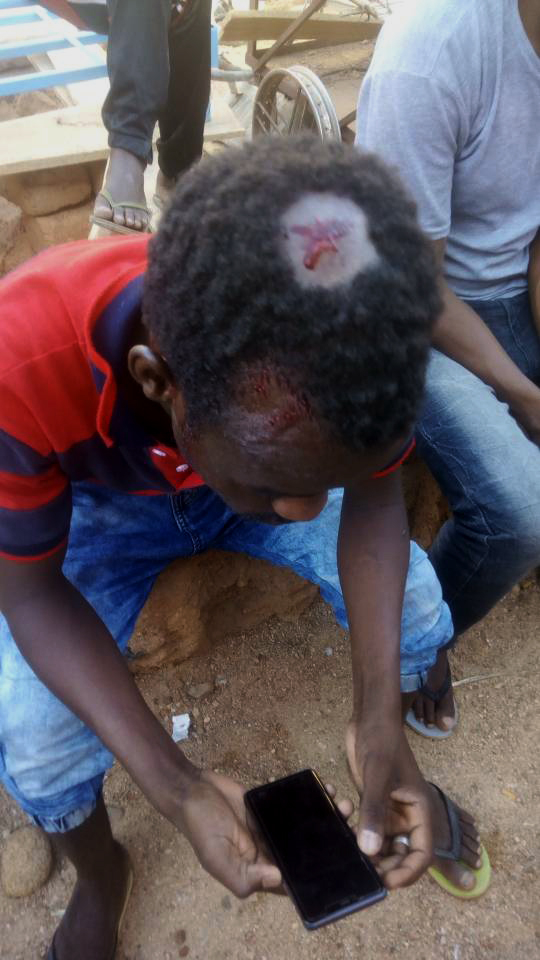 Human rights advocates expressed alarm at what they said was a violation of non-refoulement, the international law that prohibits states from sending refugees and asylum seekers back to countries where they may be in harm’s way.

The deportations are seen as setting a worrying precedent for hundreds of thousands of migrants and asylum seekers who are increasingly trapped in Libya with no route of exit to safety.

“It is inhuman and unlawful to send migrants and refugees back to Libya, where they face shocking levels of torture, sexual violence, and forced labour,” Judith Sunderland, Human Rights Watch’s associate director for Europe and Central Asia, said in an email.

“This violates the absolute prohibition under international law… against sending people to a place where they face a serious risk of threats to their lives and freedoms.”

Agadez is a major transit hub for migrants travelling from West Africa to Libya en route to Europe. But since last December, more than 1,700 Sudanese refugees and asylum seekers have fled from Libya to Niger, according to the latest UNHCR figures. This is a significant reversal of the trend of people travelling north from east and west Africa to the Libyan coast, to cross the sea and seek protection in Europe.

Since 2013, more than 600,000 asylum seekers and migrants have taken that route to Italy. The number of arrivals has decreased significantly since mid-July, when the Italian government allegedly co-opted Libyan militias to fight people smuggling.

The European Union and Italy have also been providing funding, training, and equipment to the Libyan Coast Guard, which has stepped up efforts to intercept boats carrying refugees and migrants across the sea.

Since the beginning of 2017, the Libyan Coast Guard says it has returned almost 19,000 people to Libya. A recent lawsuit filed with the European Court of Human Rights alleges that these people were returned against their will and subjected to inhumane treatment, including beatings, rape, and torture.

Clandestine migration is criminalised in Libya, and people who enter the country illegally are routinely detained for indefinite periods and suffer abuse from authorities and smugglers.

During a week-long visit by IRIN to Agadez in March, Sudanese refugees said they had fled dismal conditions in Libya. “People were being imprisoned and killed; there was looting; when someone works, they don’t get paid their salary,” said IRIN’s 58-year-old Sudanese contact, who is from the Darfur region of Sudan.

“Anywhere [UNHCR] says I can go, I’ll go – except for Libya or Sudan.”

The majority of the Sudanese who have come to Agadez are from Darfur, which has been embroiled in conflict since 2003. Many had previously been registered with the UNHCR in camps for Internally Displaced Persons (IDPs) in Sudan, or in refugee camps in Chad. They travelled to Libya in recent years in search of economic opportunity, or with the intention of crossing the sea to Europe, but got caught in the lawlessness and violence that has characterised the country since the 2011 revolution.

Many of the Sudanese “fell prey to human traffickers and ended up in slavery situations – being forced to work, beaten, not paid,” explained Vincent Cochetel, UNHCR’s special envoy for the Central Mediterranean.

As the route from Libya to Europe was constricted, Sudanese in Libya had few options of where to go. “Is there any corridor out of southern Libya that can offer… safety? No other corridor than Niger,” said Alessandra Morelli, UNHCR’s head of office in Niger.

News reports have suggested that the presence in Niger of a UNHCR programme evacuating asylum seekers from Libyan detention centres and resettling them to Europe has attracted the Sudanese to Agadez. But it is still unclear if, and to what extent, the programme is acting as a pull factor.

“I heard that in Niger there are laws and security,” the 58-year-old Sudanese man told IRIN in March about his decision to come to Agadez. Other Sudanese interviewed then said that they had heard about the presence of UNHCR and came with the hope of receiving support they had not received elsewhere. No one IRIN spoke to, even when asked directly, specifically mentioned the resettlement programme as a factor in their decision.

The Nigerien government has been wary of the presence of the Sudanese since they began to arrive in December, and has characterised many of them as mercenaries in Libyan militias.

“We understood that there was a real danger because you have some people who were fighters in [the] south of Libya,” Mohamed Bazoum, Niger’s interior minister, told IRIN in March. “They came here because now they expect to go to Europe.”

The arrests on 2 May were precipitated by strained relations between the local community in Agadez and the Sudanese, according to news reports and the UNHCR source.

Nigeriens in the neighbourhood where the Sudanese were being housed by UNHCR expressed frustration over public sanitation issues and fear over the proximity of Sudanese men to Nigerien women and girls.

UNHCR has entered mediations with local authorities and residents to reduce tensions and prevent further deportations.

Several Sudanese still in Agadez who remain in contact with IRIN via phone and text message say people there are afraid they will also be arrested and deported to Libya or back to Sudan.

When IRIN met the 58-year-old Sudanese man in March, he said he was hoping to find somewhere to stay where he wouldn’t have to face the same problems and difficulties he endured in Darfur and Libya. “Anywhere [UNHCR] says I can go, I’ll go – except for Libya or Sudan,” he said.