Burundians “at the highest level of the state” and in its security services should face trial at the International Criminal Court for crimes against humanity, a UN panel investigating more than two years of human rights abuses in the central African state said today.

The three-member Commission of Enquiry said it had “reasonable grounds to believe that crimes against humanity have been committed and continue to be committed in Burundi since April 2015.”

The violent political crisis, sparked when President Pierre Nkurunziza announced he would run for a third term in office, has been marked by a heavy-handed crackdown by security forces on street protests. It has all but extinguished hopes that Burundi will embrace a peaceful democratic transition in the wake of a civil war that cost some 300,000 lives between 1993 and 2006.

“These crimes are taking place in a context of serious human rights violations, including extrajudicial executions, arbitrary arrests and detention, torture, sexual violence, cruel, inhuman or degrading treatment, and enforced disappearances,” the commission, created by the Human Rights Council, said in a statement accompanying its final report.

The report said rights to association, freedom of movement, as well as an independent media had been stifled: Opposition parties could not meet or act freely, their members were under constant pressure, and a large number had been arrested tortured or killed.

The result of three months of investigations and 500 interviews, the report did not name names, but the commission has drawn up a confidential list of suspects.

The abuses are attributed to the government’s army, the police and the security services, as well as the paramilitary youth wing of the ruling party, known as the Imbonerakure.

Burundi’s national intelligence service (SNR) and the Burundian National Police were cited in a large number of the witness statements as the principle perpetrators.

“[The SNR agents] accused me of being a rebel,” one witness said. “Behind me, an [SNR agent] was interrogating another detainee…. He received a bullet in the leg and was bleeding. The [SNR] agents beat him as if he was a snake while he was bleeding… [The SNR agent] who was interrogating me said: ‘You see, you do not have enough strength to resist that. You are going to die if you do not admit what you know.”

The commission also documented several cases of sexual violence, including rapes, sometimes of women in front of their loved ones. Men were also victims of rape; others tortured sexually. 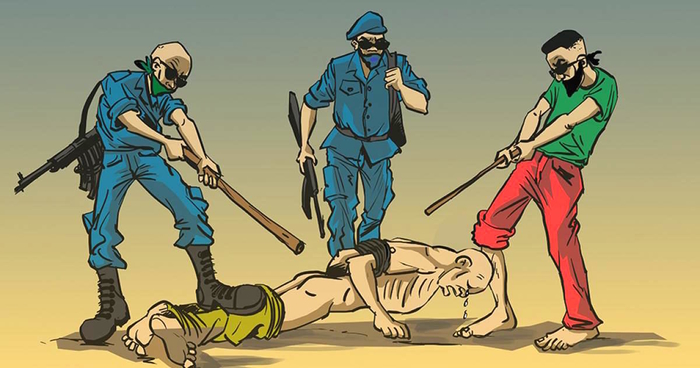 Anonymous/Human Rights Watch
A Burundian artist’s drawing of a fictional case of policemen and an intelligence agent torturing a detainee.
“They beat me many times in the genitals,” one man said. “They told me to bend over, arms level with my knees, and kicked me in the genitals. Because of the blows inflicted, I haven’t been able to have sexual relations since… It’s like I’ve become impotent.”

The commission’s president, Fatsah Ouguergouz, said: “We were struck by the scale and the brutality of the violations. We also noted a lack of will on the part of the Burundian authorities to fight against impunity and guarantee the independence of the judiciary. As a result, there is a strong likelihood that the perpetrators of these crimes will remain unpunished.”

Role of the ICC

In April 2016, the ICC announced it had launched a “preliminary examination” of the situation in Burundi – at the time more than 430 people had reportedly been killed.  This ongoing step, which under ICC procedures determines whether a full investigation should take place, focuses on “killing, imprisonment, torture, rape and other forms of sexual violence, as well as cases of enforced disappearances that have been allegedly committed since April 2015.”

In October 2016, Nkurunziza signed legislation calling for Burundi’s withdrawal from the ICC, notification of which was later that month sent to the UN secretary general. Under the Rome Statute, actual withdrawal takes place a year after such notification.

But under the statute, specifically article 127, a state’s withdrawal does not end its obligation to cooperate with the ICC on issues that were under the court’s consideration before that withdrawal, nor does it oblige the ICC to stop its work on that country.

The Burundian government rejects the commission and did not allow members to visit the country. Interviews were conducted in neighbouring countries, to where hundreds of thousands of Burundians have fled since 2015.

On 1 September, Burundi’s parliament announced it would set up its own commission, made up of 12 lawmakers, to look into the UN commission’s findings.

The UN commission’s call for ICC prosecutions comes days after an armed rebel group, the Burundi Popular Forces (an offshoot of FOREBU), warned it would step up attacks to pressure Nkurunziza to join inclusive mediated talks with the opposition in neighbouring Tanzania.

“Renewed talks had been envisioned for the end of July, but that time has come and gone without any progress,” commented Dominique Fraser, a research analyst at the Global Centre for the Responsibility to Protect.

“It's unclear how much power and influence [FOREBU] actually wield, but an escalation of violence would likely spell trouble for Burundi and could heighten the risk of mass atrocities,” Fraser told IRIN.

Thijs Van Laer, programme manager at the International Refugee Rights Initiative, agreed, warning that any renewed violence “could be followed by repression by the Burundian government.

"Real regional pressure on the Burundian government is the preferred option, as it could prevent such renewed open violence and repression, potentially followed by a new increase in ongoing refugee flows,” he added.

“Currently, Uganda, Kenya and Tanzania are putting all their eggs in the basked of mediation by former Tanzanian president Benjamin Mkapa, without really pressuring Nkurunziza to participate in it,” Van Laer said.

“They should increase pressure on government and opposition, not just to participate in talks, but also to halt abuses against political opponents and common citizens, and to support real accountability for crimes.”

According to Alex Fielding, a risk and crisis management consultant with 4C Strategies and a freelance analyst on African affairs, “violence hasn't forced the government into negotiations in the past.

“Only serious UN-backed, regional pressure led by countries like South Africa, with a credible military threat, will force Nkurunziza's hand, something that looks unlikely at the moment.”

(TOP PHOTO: A Burundian refugee queues at Lake Tanganyika Stadium in Kigoma, Tanzania, for the bus taking refugees to a permanent refugee camp in May of 2015. Jessica Hatcher/IRIN)