This article is part of our in-depth coverage. Read more like this...
KUTUPALONG CAMP, Bangladesh

Mohammad Selim disappeared the night in May that Cyclone Mora tore through the Rohingya refugee camps on Bangladesh’s west coast. But it wasn’t the storm that killed him – his was one of a handful of recent murders blamed on gangs vying for power over the camps.

Selim was snatched while walking home from his father-in-law’s hut. He had been examining the wreckage after the storm ripped through shelters housing hundreds of thousands of Rohingya who have fled persecution and violence in neighbouring Myanmar.

A few days later, the family got a call. His mother, Jamila Begum, told IRIN what happened next.

“It’s me. It’s Selim,” said the voice on the line. He said he was being held by men who had killed another refugee.

“I’m going to die!” he said. “Please forgive me! Forgive me for everything!”

After several days, children found a body in the river.

“I was thinking, ‘It’s my son. It’s my son,’” said Begum, her heavy-lidded eyes filling with tears. The body was decomposed, but she could tell it was Selim. His hair and penis had been hacked off.

Days later, the body of Mohammad Ayub, another resident of Kutupalong camp, was found with his throat slit and his hands tied behind his back. A third man, Mohammad Shafi, known as “Boli", was also killed. The violence is said to have continued, with kidnappings reported as recently as this month.

A July report by the Inter Sector Coordination Group, a multi-agency body formed to coordinate aid efforts in the camps and chaired by the International Organization for Migration, warned of the “deteriorating security situation”, citing a “surge” of incidents.

"This is a crisis zone. You really don’t have a rigorous monitoring system"

Refugees and aid workers have told IRIN that there’s a struggle for control over the camps, and the humanitarian supplies flowing into them, following an influx of refugees fleeing Myanmar.

Some suggest the victims, several of whom were community leaders, were targeted by gangs that have developed a mafia-like hold in the camps. Some say the victims were resisting demands. Others say they were murdered by vigilantes angry about corruption in the aid supply. Still others believe the gangs are fostering panic to enforce their control.

“I think it is more or less because of money,” said one senior Cox’s Bazar-based aid worker, who asked not to be named because he was not authorised to speak to media.

Whatever the reasons behind the killings, the effects are obvious: a climate of fear and confusion. Kutupalong is awash with rumours about masked men terrorising residents after dusk.

“At night, sometimes we hear the sound of gunfire,” said an elderly woman, Reyhana, who like many Rohingya goes by one name.

Home to almost 80,000 people, Kutupalong is a vast maze of dark, sweaty shelters patched together from bamboo and tarpaulin. Naked children clamber across planks balanced over raw sewage. Recent arrivals carve out space beside people who fled Myanmar in the 1990s. Generation is heaped on generation, the legacy of decades of persecution in Myanmar.

There were an estimated 300,000 Rohingya already living in Bangladesh before a wave of violence in late 2016 drove tens of thousands of new refugees across the border. Myanmar’s military is accused of killing civilians, raping women, and burning homes during a counterinsurgency offensive launched last October after a new Rohingya militant group carried out deadly attacks on border police posts. As of the end of July, at least 87,000 people had crossed the border since those operations began, according to the UN.

Now, a new round of violence threatens to push even more Rohingya to seek refuge in Bangladesh’s ramshackle camps. The same militant group behind the October attacks staged strikes on police and border posts on 25 August, in what observers are calling a "a very serious escalation" in the Rakhine conflict. Thousands of Rohingya have sought to flee, with some turned back by Bangladesh border police.

Even before the most recent violence, aid agencies were scrambling to respond to the post-October arrivals by ramping up food distribution and other services. In July alone, more than 270 children were treated for life-threatening severe acute malnutrition, according to the Inter Sector Coordination Group report, while more than 1,900 other children were admitted for treatment for moderate acute malnutrition. New refugees in Kutupalong told IRIN they were lucky to eat two meals a day, which often consisted only of rice.

Bangladesh has only allowed about 33,000 Rohingya to register as official refugees; they live in two camps administered by the UN refugee agency, UNHCR. The majority of Rohingya live in “makeshift” extensions of camps like Kutupalong. Resources have always been scarce, and the recent influx of refugees drove up the demand for aid, which was subsequently increased. Both factors are thought to have created opportunities for illicit profit for gangs, as well as corrupt community leaders who help administer aid.

Aid workers say the nascent Rohingya militancy has a presence in the camps, and threats have been made in its name. A member contacted by IRIN denied the group was involved in the killings.

Some of the targeted refugees, including Mohammad Ayub, were said to be camp leaders tasked with delivering food. These middlemen, who exist in refugee camps across the world, are influential figures in the community, often with power over who gets on food distribution lists. For some, it’s a bribe-seeking opportunity. Allegations of corruption in the system have long plagued the Cox’s Bazar camps, according to the Inter Sector Coordination Group report. “Elections of leaders in all makeshifts are recommended to tackle alleged corruption among current leaders,” it suggested.

The aid worker who spoke anonymously said gangs have been extorting money from various people in the camps, including camp leaders and refugees who make money. After aid distribution, residents are compelled to sell or give up part of their rations, he said.

“[The gangs] want control over the camp and select businesses so they can collect ransoms,” said the aid worker.

“If anyone goes against them, they target them,” he said, adding that certain refugees might be trying to “oust” the current community leadership.

One of the victims of the recent violence, Mohammad Ayub, who ran a shop, had been charged with handing out IOM rations, according to another refugee leader who spoke anonymously. But there were rumours that he was skimming profits for himself. Others said he had been seen arguing with someone who he did business with.

Selim’s mother said her son had sold spare rations to make extra money. “We got some rations from WFP or another [agency] like that,” she said. “After saving something, he is selling to someone else to have some money.” She couldn’t think of anyone who would want him dead. 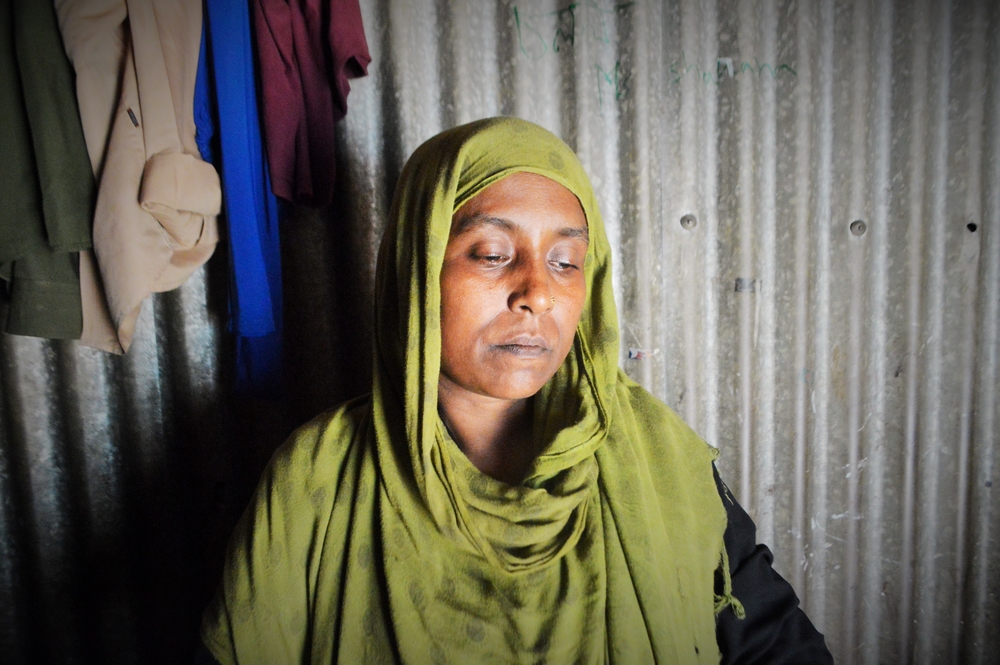 Poppy McPherson/IRIN
Jamila Begum, whose son, Mohammad Selim, was abducted and murdered, poses for a portrait in Kutupalong camp, Bangladesh.

IOM did not respond to requests for comment. Line Sofie Adser, a spokeswoman for WFP in Bangladesh, said there was no evidence violence was related to its food assistance. “WFP takes any reports of misuse of food assistance or irregularities in distributions extremely seriously,” she said, adding that WFP staff go door to door twice per month to verify beneficiary lists.

“WFP has recently been tasked with coordinating food assistance activities among local actors to ensure smoother, efficient, and safe processes for everyone involved,” she said.

But corruption is hard to shake in an emergency situation, said Shahab Enam Khan, a Dhaka-based security analyst.

The end result is that some refugees go hungry. “So, for example, they’re entitled to 10 kilos of rice but, at the end of the day, in many cases they do not receive the 10 kilos of rice,” said Khan.

A “gang culture” has grown alongside desperation in the camps, he added.

The roots and risks of Myanmar’s new Rohingya insurgency

Police in Cox’s Bazar have accused Rohingya refugees of involvement in drug trafficking syndicates smuggling methamphetamines across the border from Bangladesh.

Afruezul Haque Tutal, a senior police officer in Cox’s Bazar, blamed the violence on turmoil within the camps but said the exact motives were still unclear. “Personal interests, internal conflicts, and economic matters are behind these murders,” he said.

The deteriorating security situation means that people are fearful of leaving their huts, including pregnant women in labour who have trouble accessing health facilities, according to the Inter Sector Coordination Group report.

In addition to the murders, people say that refugees are being abducted. An aid worker and a camp leader both told IRIN that refugees have been held for ransom as recently as this month. Another camp leader, Abu Siddique, was stabbed during an attempted kidnapping and is recovering in hospital, according to the refugee. Other newcomers to the camps were taken and later released, he said.

Selim’s mother now lives in fear that those who killed him may come back and harm her or her family. “I need to go,” said Begum. “I have a daughter at home who is afraid.”