An already overstretched and poorly functioning reception system for asylum seekers stranded on the Greek islands is at risk as many of the NGOs providing health, legal, and other services prepare to pull out or have already left.

From 1 August, the majority of EU funding that has been going directly to the NGOs will start to be channelled through the Greek government. But the government has yet to release a plan detailing how it will manage the handover and there are growing concerns the transition will result in the disruption of services and a further deterioration of living conditions for the 14,000 migrants and refugees trapped on the islands.

At the height of the so-called refugee crisis in 2015, refugees spent no more than three or four days at camps like Souda on the island of Chios before moving to the mainland and then north along the Balkan route. But the camp is now home to an estimated 950 people, about 30 percent of whom have been there for more than six months, according to municipal estimates. Some have been there since the EU’s agreement with Turkey went into effect in March 2016, when Greece began detaining all new arrivals to the islands until their asylum claims were processed.

Under the agreement, Turkey was deemed a safe, third country that the majority of asylum seekers could be returned to. But in practice, a backlog of claims and a lengthy appeals process has meant only about 1,000 migrants have so far been deported back to Turkey, while a total of 9,500 refugees and migrants have arrived in the islands so far this year, according to the UN’s refugee agency, UNHCR. New arrivals continue to outnumber transfers to the mainland. During May and June, for example, 1,149 people arrived to Chios, while only 719 departed for the mainland.

The overcrowding at Souda camp meant that until recently newer arrivals were accommodated in tents on the nearby beach. According to camp manager Theodoris Konstantinidis, two weeks ago there were “orders from above” to move the asylum seekers back inside the camp, where residents complain of rat infestations, outbreaks of scabies, and a shortage of shelters. 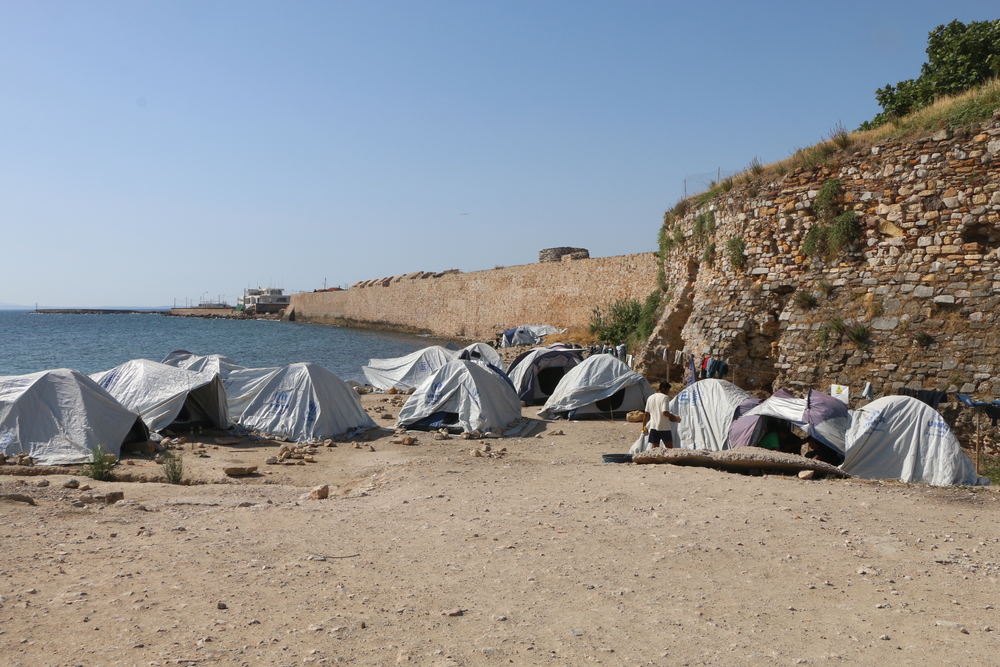 Talal Hedifah, a 37-year-old marine engineer from Tartous in Syria, was among those told to dismantle his tent on the beach and move back into the camp. He arrived on Chios six months ago and says he came fleeing conscription to President Bashar al-Assad’s army. His initial asylum application was rejected and he's now appealing the decision and hoping to avoid deportation to Turkey.

“They want us to be here, but they don't want us to be here,” he told IRIN, wiping sweat from his forehead in the sweltering tent he shares with four other men. “I just want to go, anywhere, I don't care where. If they want me to stay in Greece, I will stay. Anywhere I can have a normal life.”

On Wednesday, Human Rights Watch released a report documenting the deteriorating mental health of asylum seekers trapped on the islands in a state of prolonged uncertainty. Rates of anxiety, depression, self-harm, and suicide attempts are high, and humanitarian workers fear that a poorly planned shift in service provision could worsen the situation.

While the government is keen to show the Greek public – widely sceptical of the presence of international NGOs in the country – it is taking back control, planning for the transition to government-run services has been anything but smooth. Some NGOs have already left and others are due to withdraw services for which no replacement has been planned. Those hoping to remain are scrambling to find alternative sources of funding to continue their work.

“It is the government's attempt to take on more responsibility and directly control the flow of resources,” said Gianmaria Pinto, country director of the Norwegian Refugee Council, which is winding down its operations on the islands at the end of July. “It's definitely a more sustainable approach… On the other hand, it should come with a plan.”

Since the government announced the change in February, “we haven't heard a word,” he added. A joint letter from several international NGOs to Greece's migration minister, Yiannis Mouzalas, as well as several requests for meetings, have gone unanswered.

IRIN also made several attempts to contact the Ministry of Migration but received no response.

The EU has spent hundreds of millions of euros on managing the refugee crisis in Greece since 2015. An investigation published by Refugees Deeply in March estimated that $803 million had come into the country, the bulk of it ($654 million) from the European Commission, making it per capita “the most expensive humanitarian response in history”. With the Greek government unable to absorb a significant portion of those funds, much of it was channelled to large NGOs and UN agencies via ECHO, the EU’s humanitarian aid arm. Under the new system, the government will receive funding from the EU’s Asylum, Migration and Integration Fund and its Internal Security Fund to run reception facilities on the islands.

A statement jointly released by seven NGOs on Tuesday welcomed the transition as a positive step “if implemented transparently, promptly and in close collaboration with the organisations currently providing services”, but warned that information about how the transition would be implemented was severely lacking.

“Without a transition plan, gaps in services will likely occur, and men, women and children may be put at greater risk.”

In fact, gaps have already opened up. Research by the Refugee Rights Data Project found that nearly two thirds of asylum seekers surveyed in Chios in May had been unable to access basic services there.

When IRIN visited Souda, just one doctor, one nurse, and a volunteer with the NGO Médecins du Monde were working shifts at the camp following the withdrawal of another organisation that had been providing medical services.

The Red Cross is still providing healthcare services at Vial, the army-run “hotspot” where new arrivals are identified and asylum applications processed, but other NGOs that had been providing medical services there departed at the end of April. New arrivals now have to wait up to three weeks for their medical vulnerability assessment, which is done by one doctor from the Greek army. Similar delays have been reported at the Moria hotspot on the island of Lesvos, where 10 doctors providing vulnerability assessments to the camp’s more than 2,700 residents were recently replaced by just three.

Pressure on Chios eased slightly in June but shifted to Lesvos, which has received 1,150 people in the past six weeks, according to UNHCR. Moria camp is strewn with uncollected rubbish rotting in the summer heat. Refugees living there told IRIN that the company contracted to do rubbish collection had left three months ago and that a new contractor only collects the rubbish every 10 days.

A lawyer who has provided legal aid to refugees on the islands for several Greek organisations over the past 18 months (and didn’t want to be named) told IRIN he had recently lost his job due to a lack of funding.

“There used to be 14 lawyers in the project I was working for [with a Greek organisation], and that was not enough. Now there are only four left,” he told IRIN.

“The government has not been hiring enough people and has not been giving enough money to organisations to do their job,” he said. “They are ending the collaboration with most NGOs, and they are not organising themselves to provide the services well.”

(TOP PHOTO: Souda camp in the centre of Chios, next to the ruins of a castle, is home to 950 people. Many of them have been on the island for more than six months. Ylenia Gostoli/IRIN)