The Democratic Republic of Congo has accused neighbouring Uganda of allowing former M23 rebels to cross the common border, sparking fears of a new armed rebellion and yet more humanitarian suffering in a region long used to violence.

Government spokesman Lambert Mende Omalanga said hundreds of armed ex-M23 fighters, supposedly exiled in Uganda, had re-emerged in North Kivu Province in eastern Congo, from where they waged a 19-month war against the Congolese government in 2012-2013.

“We are disappointed with our Ugandan colleagues for letting these criminals out, moreover armed,” said Mende. “We can’t allow this [destabilisation] to happen. We engaged these criminals in confrontations and flushed them out.”

The clash he refers to took place in the border town of Ishasha on 14 January, but it’s unclear how many ex-M23 or Congolese government troops were killed.

The M23 (March 23 Movement), a largely Tutsi rebel group, began as a mutiny but rapidly gained ground in North Kivu, taking control of the provincial capital, Goma, in November 2012. It was finally defeated by the Congolese army and the UN’s Force Intervention Brigade in November 2013.

A UN group of experts’ report in December 2013 concluded that the M23 fighters were backed by Rwanda and Uganda, a charge both countries’ governments have denied.

Under the terms of the Nairobi Declarations that ended the hostilities, the M23 renounced the rebellion in return for the Congolese government’s commitment to a disarmament, demobilisation, and reintegration (DDR) programme, and a limited offer of amnesty.

Almost 1,400 M23 fighters were initially cantoned in the Bihanga Military Training School in western Uganda after surrendering nearby, awaiting eventual return to Congo. Fewer than 300 remain.

Last week, Ugandan government spokesman Ofwono Opondo admitted that some ex-M23 rebels had escaped from Bihanga. They have “lately and quietly been escaping in small groups of about five into the general public, and some to unknown places,” he told IRIN.

On 18 January, the Ugandan military apprehended a group of 101 former M23 rebels in Uganda’s western towns of Mbarara and Kabale. They were disguised as civilians en route to Congo. More arrests of former fighters have since been made.

"There was always a danger of M23 returning to the DRC."

“We caught them trying to escape back to DRC under unclear circumstances,” said Ugandan army deputy spokesman Major Henry Obbo. Some 40 to 50 former combatants had also escaped a week earlier.

But, according to a 19 January Ugandan government statement, just 270 of the original 1,377 ex-M23 fighters cantoned in Bihanga actually remain there. Subtracting those and the roughly 200 former fighters who have returned home to Congo under the DDR programme suggests around 900 have fled the camp.

“With the M23 leadership and much of its rank and file still intact, there was always a danger of M23 returning to the DRC,” Phil Clark, a Great Lakes expert at SOAS, University of London, told IRIN.

Uganda insists it was not involved in the escape of the rebels and is in no way backing another rebellion.

“These are individuals who are escaping on their own,” said Opondo. “Uganda will not and does not support any armed activities to destabilise the DRC.”

Nicaise Kibel Bel’Oka, director of the Centre for Geopolitical Study and Research of Eastern Congo, believes Ugandan President Yoweri Museveni has no appetite for backing a new rebellion as he is more concerned about shoring up the support of his own generals.

Bel’Oka told IRIN it was “an open secret” that there were now divisions within the Ugandan military, adding: “If Kampala takes the risk of arming ex-M23 elements and sending them to fight in Congo, it runs the serious risk of seeing them turn against the [Museveni] regime.”

Uganda has called repeatedly on Kinshasa to honour its DDR commitments, which were plagued by a lack of trust between the former M23 rebels and the Congolese government.

“We can’t be blamed for the failed repatriation of these people,” said Opondo, the Ugandan government spokesman. “We want them out. We have always asked the DRC government to take them back. But they [authorities] seem unwilling and failed to convince them.”

A senior M23 official, who asked not to be identified, told IRIN the mass escape was a direct result of the Congolese government dragging its feet over the DDR programme and failing to provide the necessary security guarantees to convince the ex-rebels to return.

“These combatants have been in Bihanga for over three years without knowing their next fate. [President Joseph] Kabila has failed to honour the implementation of the Nairobi Declarations and Addis Ababa Agreements for their return and reintegration,” the M23 source said.

“As Congolese citizens, they have a right to go back home without informing anybody,” the source added, denying however that they had returned armed.

In January 2014, violence flared in Bihanga when the former rebels protested against their return home, fearing ill-treatment.

“The main sticking point was the government's refusal to offer an amnesty to the M23 leadership,” said Clark.

M23 fighters loyal to Bosco Ntaganda move along the road towards Goma as Peacekeepers observed gathering of armed people North of the city, the 1st of March 2013 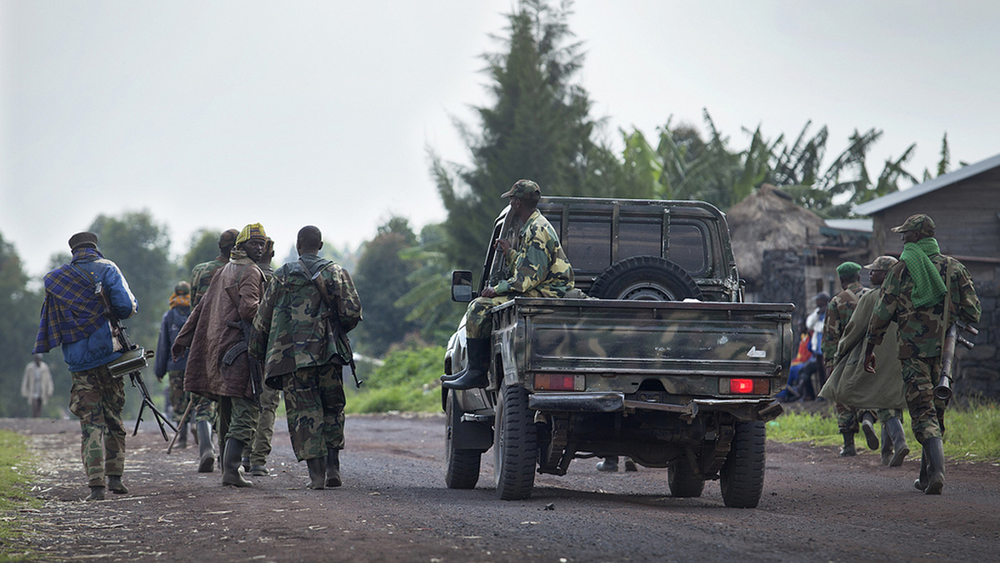 The M23 fighters are arriving back in Congo at a particularly tense time.

“The whole region is worried about Kabila's refusal to rule out running for a third term, and the ongoing uncertainty over when the Congolese elections will be held,” said Clark. “The *situation in Congo potentially destabilises all of its neighbours. So, it isn't surprising that some armed actors may intervene militarily, either to try to resolve the political situation by force or to capitalise on the general uncertainty.”

Kabila was constitutionally due to step down in December last year, at the end of his two-term limit. But he has managed to cling on to power even in the face of a united and furious opposition.

According to a deal mediated by the Catholic Church on New Year’s Eve, he is supposed to stand down after elections at the end of 2017. But no one seems convinced that Kabila – who came to power in 2001 after the assassination of his predecessor and father (former rebel leader Laurent-Désiré Kabila) – will stick to the agreement.

“Even if the former M23 rebels do not seem to have any clear objective in reforming their group, the fact that Kabila has outstayed his welcome can make it easier for them to recruit new members in the Congo and legitimise their existence,” said Nina Wilén, a postdoctoral research fellow at Université Libre de Bruxelles.

The New Year’s Eve accord calls for the reform of the electoral commission, new voter registration, a new prime minister nominated by the opposition, and a follow-up committee to oversee implementation of the agreement.

But the deal does not include a detailed calendar for implementation, nor is it even clear how the follow-up committee will be structured.

Thierry Vircoulon, a lecturer on security issues at Sciences Po in Paris, told IRIN that Kabila has a habit of “playing for time” when pressed.

“The Congolese political class as a whole likes the long negotiation,” he said. “But the December accord is an emergency accord. The timeline for the elections is only 12 months, so very short. Given all these tasks and the 12 months’ timeframe, we are already late.”

“Credible elections can't be organised when opposition leaders and activists are thrown in prison and beaten, and convicted on trumped-up charges, when independent media outlets are shut down or blocked, and when security forces fire live rounds on peaceful protesters,” she wrote.

“They should support the organisation of credible, timely elections and signal that they stand ready to impose additional targeted sanctions and other punitive measures should the repression continue, if those responsible for past abuses are not held to account, or if efforts are made to prevent or delay the organisation of elections," she said.

Bel’Oka believes the M23 are a symptom of a broader problem of governance in Congo and said that part of the solution involves facilitating their proper return.

“Today, these former fighters cantoned in Uganda feel abandoned,” he explained. “So they become easy to manipulate and are ready to conclude that, no matter what, they will be considered the enemy, especially by Kinshasa.”

(Additional reporting by Claude Sengenya, a freelance journalist and regular IRIN contributor based in Beni in the Democratic Republic of Congo)

*(An earlier version of this story wrongly attributed this quote to Ida Sawyer of Human Rights Watch. Sawyer is quoted lower in the story)