Read about what we achieved.
HARARE

The focus of Zimbabwe’s growing civil disobedience campaign shifted to a court building in Harare on Wednesday, where pastor Evans Mawarire, a leader of the protest movement, was appearing on the charge of subversion.

Mawarire, who heads the reformist #ThisFlag campaign, was arrested on Tuesday ahead of “stay at home” protests planned for today and Thursday.

But in a dramatic move late on Wednesday, magistrate Vakayi Chikwekwe freed Mawarire, ruling that his rights had been violated. He had orginally been charged with inciting violence, but before his court appearance it was was changed by prosecutors to the more serious charge of attempting to overthrow a constitutionally elected government.

Mawarire’s lawyer argued that the change was unconstitutional and Chikwekwe agreed.

Interior Minister Ignatius Chombo had said in a statement on Tuesday: "Let me warn the instigators behind the intended protests that they will face the full wrath of the law."

That hard line approach appeared to have had the desired effect. It was business as usual in Harare on Wednesday, aside from a large crowd of Mawarire supporters gathered outside the magistrate’s court where he was due to appear.

However, academic and political commentator Ibbo Mandaza predicted that Mawarire’s arrest will “worsen the situation” and was a “terrible shame”.

The disobedience campaign, organised through a vibrant social media, is protesting government corruption and economic mismanagement. It is the most serious challenge the ruling party, led by President Robert Mugabe, has faced in a decade.

Last week a one-day stay away led to a complete shutdown of schools, businesses and shops across the country. Opposition MP Thokozani Khupe has called for women to take to the streets of the second city of Bulawayo in a #BeatThePot campaign on Saturday to protest deteriorating standards of living.

Taking on the police

More than 300 people have been arrested across the country since the beginning of the month, according to Zimbabwe Lawyers for Human Rights. Demonstrators have been beaten by police, mauled by police dogs, and some have been refused medical attention while in detention, the NGO said.

The unrest began in the border town of Beitbridge, with residents protesting the banning of imports from South Africa on which the economy of the bustling trading centre depends.

Tonderai Mashavakure has for the past 10 years made a living from buying goods from South Africa for resale in Zimbabwe. “Through thick and thin my kids have been able to go to school and have food on the table,” he told IRIN.

The import ban, imposed by the government to conserve scarce foreign exchange, threatens to put him out of business. “This shows a government that is distanced from the realities of its citizens,” said Mashavakure.

Daily hardships extend to the bribes demanded by the police. On 4 July, bus operators took to the streets to protest the proliferation of roadblocks, some merely an excuse for extortion.

“Every day we pay more than US$30 as spot fines to the police, and we are expected by our employers to produce $80 to $100 at the end of the day,” said bus driver Alois Cheza.  “The roadblocks are too many and a breeding ground for corruption.”

Last week’s protests were triggered by the news that civil servants were to receive their June salaries only in the middle of July. 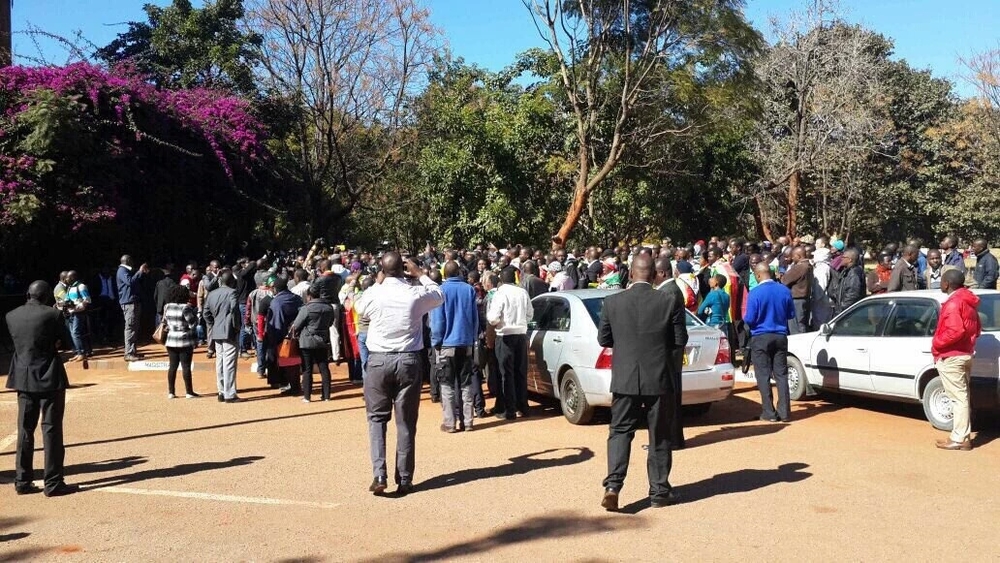 “I have rentals to pay and [I need to] service my loan at the bank,” said one public service worker who asked not to be named.

For months now there has been a crippling cash shortage, an indication of the economy’s deep distress. A daily withdrawal limit of $50 has been imposed by most banks, and long queues form outside ATM machines each day, snaking around bank buildings.

Zimbabwe runs a hand-to-mouth budget, with 82 percent of its revenue spent on wages and salaries leaving little or nothing for developmental projects. It was this balance of payments crisis that forced the government to try and delay paying public sector wages.

"Clearly there is an intersection of national grievances across the board, economic and political,” said Mandaza. “We are in a new phase of politics.”

The formal job market is not only small but shrinking. According to the Zimbabwe Congress of Trade Unions, 226 companies shut down during the first half of the year. Hwange Colliery and the National Railways of Zimbabwe are the latest major companies to announce the shedding of jobs.

Nearly half of foreign inflows – around $1 billion – comes from remittances. Most of that is generated by Zimbabweans working in South Africa. The downturn in South Africa’s economy has affected not only household incomes, but the foreign currency available in Zimbabwe’s dollarised economy. The country has not had its own currency since the hyperinflation days of 2009.

The government blames its economic woes on western “sanctions”, and the current protest movement on its enemies who are bent on regime change. But it is also trying to arrange a loan from western donors to cover its arears to the International Monetary Fund and the World Bank. Paying off the debt would make it eligible for fresh lending, after years of isolation.

Economist Luxson Zembe said the mass action, despite the government’s known intolerance for protest, is an indication of public anger and desperation.

“People are saying something drastic has to be done to correct the situation. [It's] a clear statement from the general public that they need solutions from the leadership,” said Zembe.

There has been as much insult as injury. Mugabe recently admitted that over the past eight years, revenue worth $13 billion from the Marange diamond fields in eastern Zimbabwe had gone missing. As the diamond region is under the control of the army, it is unlikely that heads will roll.

Last week demonstrators broke into the hotel of Vice-President Phelekezela Mpoko to protest his stay there for more than a year at taxpayer’s expense.

The government is hoping that a deal on its arrears will provide the money that could allow it to limp on. But demonstrators see the government itself as bankrupt and are demanding far more radical change, after 36 years of rule by Mugabe.