“Yesterday, we received 203 new migrants, today it was 585, and tomorrow there will be more, and the next day, and the day after.”

Khalid al-Tumi runs the Zawiya migrant detention centre, 23 kilometres east of Sabrata in northwestern Libya. The coast around Sabrata has become one of the main departure points used by people-smugglers following a crackdown on their former hub of Zuwarah. All of the migrants he is referring to have been apprehended from boats and returned.

Zawiya houses 1,727 detainees, far above its official maximum capacity of 1,200. Food and water supplies are already inadequate and al-Tumi said he has no additional resources for the new arrivals.

“Next week, we will face a really major problem and I don’t know how I will manage. We have no more blankets or mattresses,” he told IRIN. “Everything I have is already being used.”

Libyan authorities have apprehended some 3,500 migrants trying to take boats to Europe just in the last week, according to the International Organization for Migration (another 880 migrants are thought to have died in a string of shipwrecks).

Ayoub Ghassem, a spokesman for the Libyan Navy, claimed that more migrants are attempting the crossing to Europe than in previous years. He blamed the increase on Operation Sophia: the European Union’s naval mission launched last May to counter migrant smuggling in the Mediterranean.

“Since the start of Operation Sophia, we have had much greater numbers of migrants trying to go to Europe because they know that the boats are operating in the sea, so they don’t have to make it all the way to Italy,” Ghassem explained. “All migrants’ boats have satellite phones and GPS. Before, they had to wait until they reached Italian waters to make a distress call, but now they start making SOS calls as soon as they leave Libyan territorial waters.” 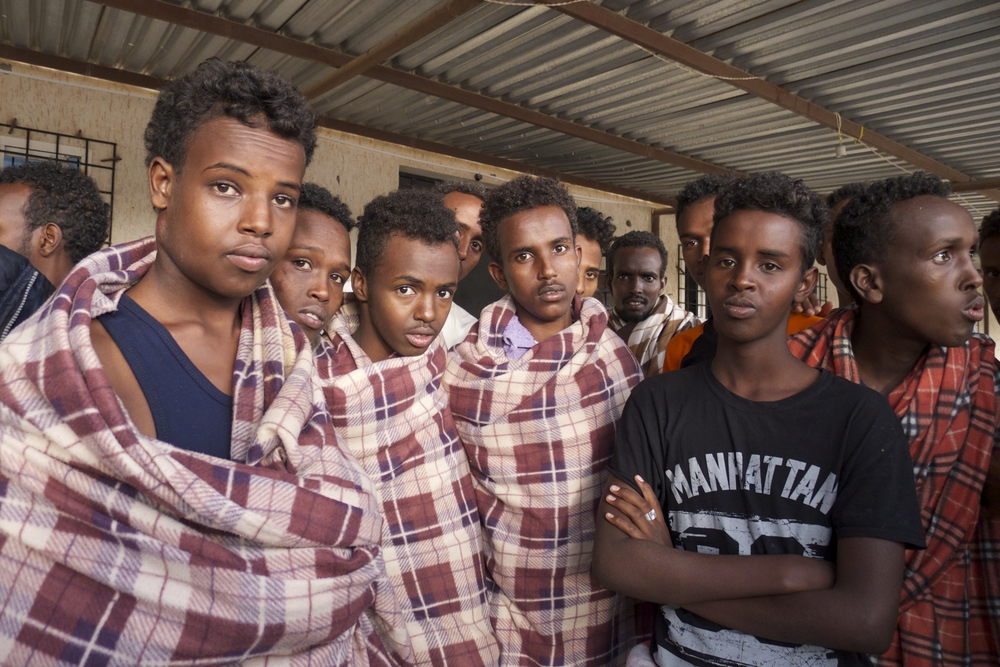 According to the IOM, migrant arrivals to Italy during the first five months of this year are in fact at similar levels to last year. However, the number of boats being intercepted in Libyan waters could soon increase if the EU makes good on its recent promise to provide training and equipment to Libya’s coastguard as part of plans “to enhance the capacity of Operation Sophia to disrupt the business model of human smugglers and trafficking networks”.

The EU announcement last week was greeted with derision by Ghassem, who described it as little more than a publicity stunt. “We have enough experience and we can train ourselves,” he said. “We need logistics support and equipment. We are working with almost nothing, and we need everything you can think of: boats, radar, radios, uniforms – literally everything.”

Patrol boats to monitor the coastline are in particularly short supply. The coastguard often relies on local fishermen to tell them when they spot overcrowded dinghies or decrepit wooden fishing boats. The few vessels the coastguard has are smaller and less powerful than some of the smugglers’ boats, making pursuit difficult and rescue operations even harder, Ghassem said.

The EU’s offer of support also fails to address the issue of what happens to the migrants after they are caught and returned to Libya, where they face incarceration in one of the country’s 30 functioning migrant detention centres, many of which are under the control of militias.

Up until 2014, when Libya started its descent into civil war, the EU and Italy were providing funding to the detention centres, according to the Global Detention Project. But last year, the deputy head of the Department for Combatting Illegal Immigration (DCII), Colonel Mohamed Abu Breda, told IRIN that since 2011 the EU had basically left Libya to deal with the migrant problem alone. “The EU and Italians made a lot of visits and pledged assistance to Libya but unfortunately all we have received is empty promises and words, and no actions,” he said. “We can’t be sure that assistance was not given but it never reached us. This administration has not received any assistance."

The formation of a UN-backed government at the end of March (now one of three rival governments) has prompted speculation that the EU will seek to partner with the fledgling administration to stem the flow of migrants to Europe. Der Spiegel reported recently that a leaked internal EU document revealed a proposal to work with Prime Minister Fayez al-Sarraj’s new government to build “temporary detention centres for migrants and refugees”.

The DCII has remained one of Libya’s better-functioning institutions as the country has descended into chaos. But, for its overworked staff, some of whom have not been paid for over a year, the situation is at breaking point.

“We have [returned] 1,097 people so far this year, but more are coming all the time and we make new arrests every day,” said Tripoli’s DCII manager for migrant repatriation, Mohammed al-Bougar. “We desperately need help because we need to look after these people and feed them. Our prisons are too small for the numbers and we have shortages of everything, including food.”

Martin Kobler, Head of the UN Support Mission in Libya, visited Tripoli’s Abu Sleem migrant detention centre earlier this month and talked to painfully thin detainees. He said he was horrified by their living conditions.

“There are two toilets for 100 people, and this is by far not enough,” he told IRIN. “The medical situation is substandard. So it is really important that these people are not here, but that they are going back to their countries where they are taken care of.”

IOM has organised voluntary repatriation for several hundred detained migrants from Senegal, Niger, Mali, and Nigeria since the beginning of the year, but many of the migrants are likely to reattempt the journey to Europe.

It took 35-year-old Kalu from Nigeria two years to reach Italy, during which time he was incarcerated three times, abducted twice and repeatedly beaten, both in detention and whilst trying to find work in Libya’s main cities. He was deported back to Nigeria after just three weeks in Italy, and immediately started borrowing money to make the journey again. “There is nothing in my country, no future at all, so I have to try again,” he told IRIN, shortly after arriving back in Tripoli. 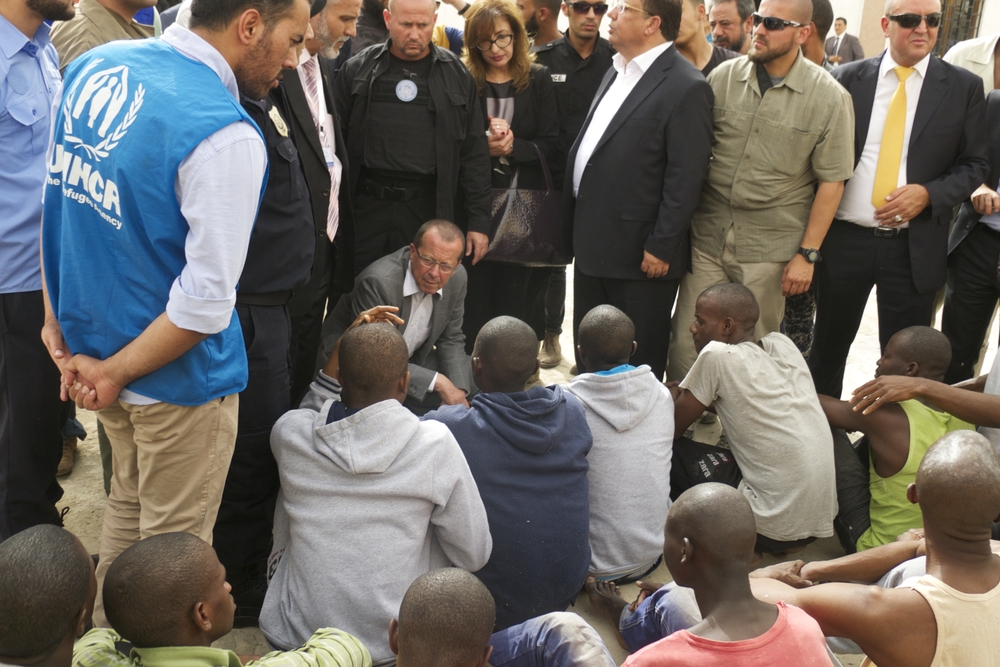 During Kobler’s visit, journalists were forbidden to talk to the migrant detainees. One young Sudanese man whispered a plea for help, saying the situation at the centre was “very, very bad” and many of the detainees were unwell, until a guard silenced him.

Before being ushered away in an armoured vehicle, Kobler said the UN was strongly opposed to human trafficking and that reaching a political settlement in Libya was the only way to prevent it. “These crimes can flourish only if there is a political vacuum and I’m working on filling the political vacuum - to have police, to have army, who are putting an end to human trafficking and to these crimes happening in this country.”

People-smugglers who spoke to IRIN estimate that as many as 2,000 migrants from sub-Saharan African countries cross into Libya each week via the Tumo border crossing with Niger, just one of three main entry points.

Prostituted, beaten and held for ransom

Dealing with the migrant dead

Al-Bougar said that arresting the smugglers was much more difficult than arresting the migrants. “Many times we have tried to intervene in smuggling operations, but they shoot at us. It has become a very dangerous job,” he said. “Last week we tried to catch one smuggler, but my men only have old rusty guns and these were no match for the smugglers’ weapons. When they opened fire on us, we had to withdraw.”

Another DCII official, who works in Sabrata, and who spoke to IRIN on condition of anonymity, estimated that as many as 30,000 migrants were being housed by smugglers in warehouses and rural properties near the town, waiting to set sail. “Every year we have seen this problem increasing but this is the worst year yet,” he said. “Sometimes I watch them at night loading the people onto boats  – five or six boats at a time – but I can do nothing. If I try to intervene, the smugglers will kill me, and probably my family too.”