Alejandro Labarte, a 32-year-old X-ray operator from Cuba, has been stuck for the last 20 days in a warehouse in Turbo, a chaotic port in northern Colombia near the Panamanian border. His journey north towards the United States was interrupted earlier this month when Panama closed the border in an attempt to halt the flow of mainly Cuban migrants.

Labarte and around 200 other Cubans, including several pregnant women, are now staying in the warehouse, which a group of local store owners offered for use as a shelter, while local volunteers have been providing food and water.

“Me, and all of us in the shelter, have the same stance: we are not going to move anywhere that is not the US,” said Labarte, speaking to IRIN over the phone. “Only when I’m dead can they take me out of here.”

He told IRIN that two of his travelling companions left the shelter on Tuesday morning to buy detergent and never came back. The other occupants of the shelter fear the two men were picked up by Colombian authorities and that it’s only a matter of time before the same happens to them.

Three hundred migrants arrested in Turbo have already been deported, according to Colombia´s migration authority, while 120 more are awaiting return to the last country they passed through before entering Colombia.

Panama’s decision to close its border was the result of a domino chain of closures from north to south in response to the growing popularity of routes through South and Central America towards the US. There are Cuban migrants, but also migrants from Haiti, Somalia, Pakistan, Ghana, Senegal and the Democratic Republic of the Congo.

The chain began with Nicaragua, which in November 2015 closed its border with Costa Rica to Cubans and other transiting migrants. Costa Rica responded by closing its border with Panama in late March, prompting Panama to do the same at its southern border with Colombia. Panama later airlifted some 3,500 stranded Cubans to northern Mexico.

For its part, Colombia has dealt with the growing arrival of Cubans by issuing them with eight-day transit permits, which encourage them to quickly move north or face arrest.

In 2015, the total number of irregular migrants detected in Turbo and Capurganá, a neighbouring port, was 2,942, compared to just 502 in 2014. So far this year, migration authorities have already recorded 3,830 migrants making their way north, almost all of them transiting through Turbo – a few hours away from Panama by boat.

“The route became successful, and what is successful becomes appealing.”

Last year Colombia’s southern neighbour, Ecuador, received some 50,000 Cubans. Authorities suspect that the majority of them then transited through Colombia and Central America to reach the US, which received 43,159 Cubans in 2015, a 78 percent increase from the previous year, according to government figures.

The surge in the number of Cubans heading north is likely based on fears that warming relations between Washington and Havana could mean an end to a preferential policy, known widely as “wet-foot, dry-foot” that allows Cuban asylum seekers who make it to US soil special access to permanent residency and citizenship (those caught at sea are usually returned).

For decades, the majority of Cubans reached the US by using self-constructed vessels to cross the 90-mile stretch of the Caribbean that separates the island from the southern tip of Florida.

The new land route involves either flying to Ecuador or Guyana, which following Ecuador’s introduction of visa requirements for Cubans in December 2015, became the only South American country that doesn’t require a visa for Cubans. From there, the migrants travel overland through Venezuela to reach Colombia.

Labarte is among a group of Cubans who came to Colombia directly from Venezuela. He and 20,000 other Cubans moved to Venezuela 11 years ago as part of an official medical mission sent to support the socialist administration of former Venezuelan president Hugo Chavez.

The current political and economic turmoil in Venezuela, characterised by sky-rocketting inflation and chronic food, medicine and electricity shortages, has pushed many Cubans to leave and they’re not eager to return home to a still-repressive regime.

“We know that some of the Cubans that pass through Turbo are doctors, engineers and architects,” said Turbo Mayor Alejandro Abuchar, who estimates that another 300 Cuban migrants are stranded in Sapzurro, a tiny fishing village on the Colombian side of the border. He has asked international NGOs to start providing assistance. Currently, the migrants are only being helped by local people.

The closure of the Panama border has not stopped the movement of all migrants. Many have simply diverted away from official – and now strongly enforced – checkpoints, to informal crossing points along the 266-kilometre border of dense jungle known as the Darien Gap.

“Migrants keep arriving, but many of them, especially the Haitians and Africans, continue their journey,” said the manager of a hotel in Turbo where the migrants stay. “Who is passing them and how? That I don´t know.” 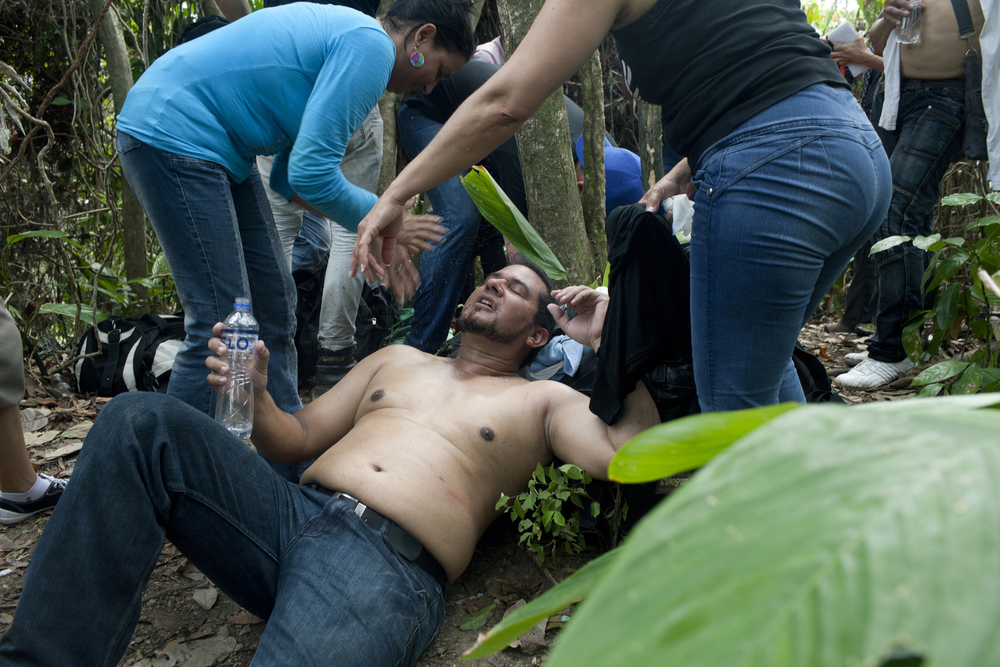 The lack of a government presence in the area has made the Darien Gap a long-time haven for drug traffickers. Now, migrant smuggling routes are overlapping with the cocaine and arms trafficking routes that have fuelled Colombia´s half-century of armed conflict.

“It is a very risky journey,” said Fernando Calado, head of programmes at the International Organization for Migration in Bogota. “It is a zone of thick jungle and a very dangerous sea, managed by criminal gangs.”

Police report that the drug traffickers are using the migrants as “mules” to smuggle cocaine into Panama. Migrants agree to transport the drugs in lieu of paying “coyotes” a $2,000 charge to cross the border.

But other reports suggest the recent attention on the humanitarian situation at the border has affected the drug trade. According to unconfirmed reports, two "coyotes" have been killed by druglords in recent weeks.

“The border closure elevates the risk of abuses and exploitation,” said Calado, referring not only to the smugglers and drug traffickers, but also to the border guards who accept bribes to let the migrants pass.

Labarte, like many of the Cubans who have remained in Turbo, is unwilling to risk a journey through the jungle with smugglers who may rob and abandon him.

“Right now, we are simply asking for a humanitarian visa that allows us to leave Colombia and reach Panama or Mexico,” he said.