Search-and-rescue teams continued to pull survivors from the rubble left by the 7.8-magnitude earthquake that struck Ecuador on Saturday evening, but some remoter coastal communities remained out of their reach with roads collapsed or blocked by landslides.

Karla Morales, a human rights lawyer from Ecuador’s second city of Guayaquil, volunteers with the local NGO Kahre. She told IRIN that her organisation had been among the first to reach some of the smaller towns in the hard-hit province of Manabi on Monday. 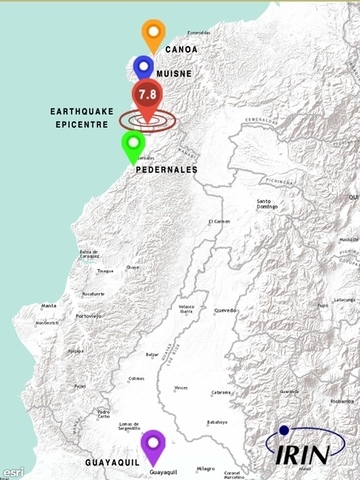 "Canoa is devastated, totally destroyed,” she said, referring to a fishing village between Manta and Pedernales.

“We pulled one survivor from the wreckage. Bodies are being taken to the local park as nobody knows what else to do.”

She added that other small towns such as Jama had yet to be reached. Pictures on social media showed the school in Calceta, further to the south, totally flattened.

The need to reach such places and carry out search and rescue was “very urgent,” Pablo Torrealba, a technical assistant with the EU’s Humanitarian Aid and Civil Protection department, ECHO, told IRIN. “We have to do this within 72 hours after the quake. So until Wednesday we’re still hopefully going to find people alive.”

The official death toll of 413 is expected to rise as rescue teams reach more remote communities.

Diego Castellanos of the Ecuadorian Red Cross said that helicopters were being used to get to some hard-to-reach places.

Four hundred national Red Cross volunteers were among the first to respond in Pedernales, where as much as 80 percent of the town of 50,000 has been reduced to rubble, according to Castellanos.

“We have some indications that people tried to run, but their homes and buildings collapsed very quickly,” he told IRIN.

National Red Cross staff were joined on Sunday by Red Cross teams from neighbouring Colombia as well as Mexico. As part of the EU’s Civil Protection Mechanism, a team from Spain also arrived on Monday to help with search-and-rescue efforts.

A search-and-rescue team from Venezuela was also rushing to the disaster zone, as was a large medical deployment from Cuba.

ECHO, along with a team from the UN’s Disaster Assessment and Coordination facility, has begun coordinating with national authorities to carry out an assessment of the most urgent needs in the six provinces affected by the earthquake.

“All of us are still waiting for more information from the field,” said Torrealba, adding that the emphasis would be on coordinating with and supporting national authorities.

Bárbara Helbling, a doctor based near El Carmen, said the situation is most desperate between Pedernales and Muisne, where many small towns and villages are still without aid.

In addition to the need for many more paramedics and people to do search-and-rescue, she said there was an urgent need for water. "Besides that, pots and stoves to cook the food people are sending, as well as basic medicine and trained or emotionally strong persons."

“There are many independent people who are organising supply caravans, but it's poorly organised,” Helbling told IRIN. “There are places where there are things in excess, others where nothing has arrived.”

She added that problems were emerging with untrained volunteers who have been struggling to cope with the devastation and numbers of dead bodies being pulled from the rubble. "Many of those who've come are now another burden" to rescuers, she said.

The government has started imposing a system of safe conduct passes to control travel in the area, but volunteers like Morales said the restrictions were creating problems for the passage of trucks carrying aid.

"It's unacceptable that donations be held back and that victims' access to them are delayed,” she said.

"Local mayors are doing what they can, but they're completely overwhelmed. We're coordinating aid deliveries with them. Our trucks depart Guayaquil in the afternoon, and return around dawn to be reloaded."

Helbling said there was a need for more materials to build emergency shelters. "The risk for dengue, zika, and chikungunya to increase is rising because people are [sleeping] outdoors without any protection."

She noted that the bamboo cane houses inhabited by many of the poorest had fared comparatively well. "They look like they could be pushed over by a breeze, but they largely survived. It's the cement block houses that collapsed."

The government has activated some $300 million in emergency funds, but Ecuador’s president Rafael Correa told Reuters that reconstruction would cost billions of dollars.

Ecuador is already suffering from low oil prices which have helped propel the economy into recession. Last week, the International Monetary Fund predicted that the country would see a 4.5 percent drop in GDP in 2016 and a further 4.3 percent fall next year.