A US airstrike in September obliterating a hospital in Afghanistan renewed concerns about accountability in conflict. However, a proposal to strengthen compliance with the rules of war is meeting significant resistance at a conference this week of the states party to the Geneva Conventions.

A resolution, drafted by Switzerland and the International Committee of the Red Cross, proposes an annual meeting of states to review thematic and technical issues of international humanitarian law as well as voluntary self-reporting on compliance to it.

But of the 196 countries that have ratified the Conventions, 169 of whom are currently meeting at the International Conference of the Red Cross and Red Crescent in Geneva, several have strongly opposed the proposal – so much so that on the second afternoon of the conference, diplomats were gritting their teeth and preparing for an all-night negotiating session.

The International Conference, held once every four years, brings together national Red Cross and Red Crescent societies, the International Federation of the Red Cross (IFRC), the ICRC, states party to the Geneva Convention, and observers.

A counter-proposal from Russia and eight other states, including India, Cuba, North Korea and Belarus, seems to be the main obstacle to the resolution – the product of four years of global consultations and preparations. The Russian alternative emphasises the importance of compliance, but establishes no specific mechanism through which to enforce it. Instead, it suggests that confidential bilateral contact between the ICRC and warring parties remains the best approach.

But the ICRC has been reluctant to water down the text, which, in its view, already represents a compromise.

“Further diluting the text in front of us will erode the current support base for the resolution, while further strengthening the resolution will alienate those who still remain to be convinced,” ICRC President Peter Maurer said during the opening of the three-day meeting.

According to one Western diplomat, key drafter Switzerland knew Russia remained opposed to the resolution heading into the deliberations, but hoped that wide consensus and pressure during the negotiations would isolate Russia, particularly at a time when it is accusing other states of violating IHL in ongoing crises.

Instead, Russia appears to have mobilised many of the Arab states and members of the Organisation of Islamic Cooperation.

The adoption of resolutions at the Red Cross/Red Crescent conference is traditionally achieved through consensus. Rumour has it that only once since the first International Conference in 1867 has a resolution gone to a vote.

“If this gets pushed through in a vote, this conference will be historic,” a Western aid official said.

To make matters more complicated, delegations of Red Cross and Red Crescent societies – who outnumber governments at the meeting and largely support the resolution – have an equal vote.

'Blatant disrespect' for the law

In a separate public session on contemporary challenges to IHL, several states including New Zealand and Australia said they saw compliance to the law as the major obstacle.

The ICRC calls the proposal the “missing piece” of the Conventions, warning that those engaged in today’s conflicts are displaying a “continued and blatant disrespect for international humanitarian law”.

The recent airstrike on a Médecins Sans Frontières hospital in Kunduz, Afghanistan, is only the latest example of the repeated attacks on civilian and medical facilities, sieges of civilian areas, execution of detainees, and destruction of cultural property that have become commonplace in war.

While many other international treaties have review processes, there is no mechanism through which to review compliance with the Geneva Conventions.

Some states already voluntarily report on their implementation of IHL. Costa Rica, for example, has established a national committee for International Humanitarian Law.

So if the process is voluntary anyway, what’s the big deal?

But the proposal comes in a climate in which – if asked today – many states would not sign on to the Geneva Conventions. Many countries oppose public review processes, even if they are non-binding and voluntary. They fear they could lead to the kind of country-specific ‘naming and shaming’ that they have always argued is counter-productive within the UN human rights system.

At the start of the conference, Swiss President Simonetta Sommaruga tried to alleviate such concerns, saying the proposed forum “is not so that we can hold states up to criticism or scorn. It is so that we can contribute to making international humanitarian law more effective.”

But according to the Western aid official, some of those opposed worry a voluntary reporting mechanism would only be the beginning. “Some of them are looking to the Human Rights Council and wondering, ‘Is this the embryo of an IHL Council’?”

Some diplomats suggest the expected nightlong haggling may lead nowhere, and that negotiations will be forced into a “hard stop” tomorrow, when the conference is due to wrap up. Others believe some form of compromise will have to be found: neither the ICRC nor Switzerland, who have spent years working on the plan, want to leave the conference empty-handed.

But, in anticipation of some opposition, the proposal had already been weakened significantly over the course of those four years. Watering it down even further may, some diplomats fear, create a resolution that gets consensus but is completely meaningless in terms of strengthening respect for the rules of war.

On the flipside, many states, including members of the OIC and the United States, have argued that a resolution pushed through without consensus will be weak and will not be respected anyway.

Past 11pm the day before a deadline for agreement, states party to the Geneva Convention negotiate a 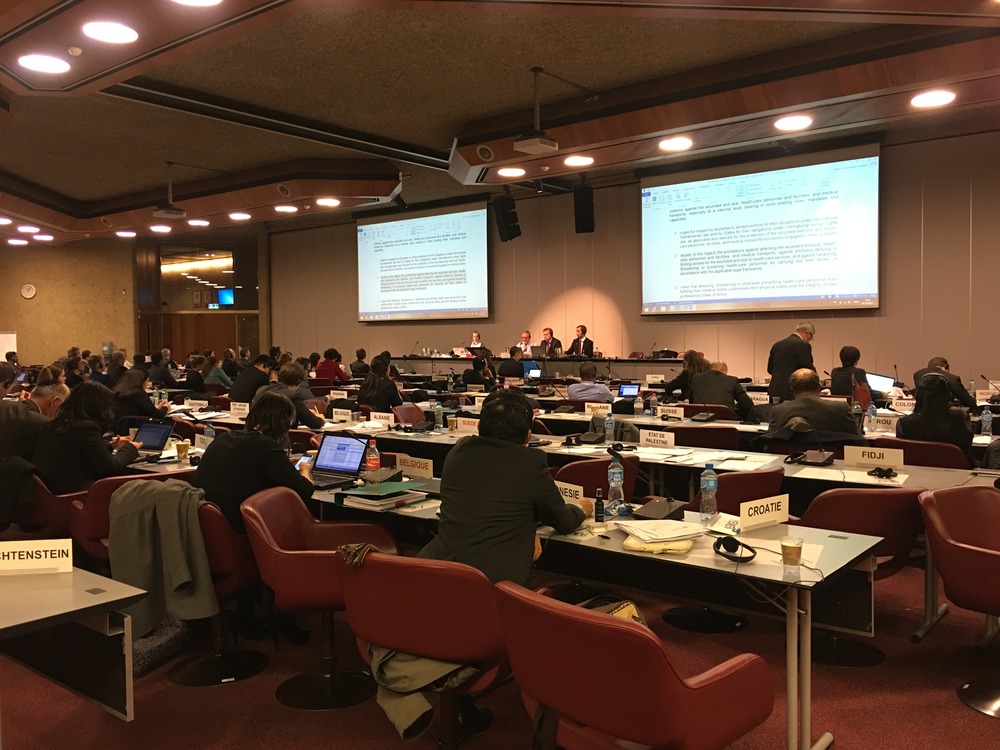 While the IHL compliance mechanism has been the most controversial proposal, a resolution calling for stricter safeguards for detainees has reportedly faced resistance from the US, and another on toughening responses to sexual and gender-based violence is facing opposition from those who do not want to see gender issues legislated.

Resolutions will be adopted Thursday afternoon. With the exception of the drafting committee responsible for the deliberation of resolutions, the conference is open to the media for the first time in its history.