The signing of a ceasefire between Myanmar’s government and ethnic armed groups unfolded with pomp and ceremony today, following a week of clashes that displaced about 1,000 people in northern Shan State.

The quasi-civilian government that took power in 2011 after 49 years of military rule made the Nationwide Ceasefire Agreement a key plank in its reform programme. It is aimed at ending ethnic wars that have raged since independence from Britain in 1948. But in the end, only eight of the 15 ethnic armed groups invited to sign on have done so.

One of those groups was the Shan State Army-South, which like many ethnic armies also has a previous bilateral ceasefire with the government that has not prevented continued clashes. There is scepticism that the new ceasefire agreement will change much, especially since the SSA-S accused the military of launching attacks on the eve of its signing.

Sai Oo, a colonel in the SSA-S, said the military had assaulted its positions in the township of Kyaukme on Saturday, which followed a series of attacks in September. Myanmar’s military does not have a spokesperson and access to conflict zones is restricted, making it hard to independently verify incidents.

Clashes have been ongoing since 6 October between the military and a separate ethnic armed group, the Shan State Army-North, which has not agreed to sign the NCA. The fighting has forced about 1,000 people to flee their villages in Mong Hsu township, according to local media reports and local sources.

More than 100 families fled to the northern Shan State city of Lashio, and another 200 took shelter in a monastery in the capital of Mong Hsu township, according to Sai Sein Myint. He is the Mong Hsu chapter chairman of the Shan Literary and Cultural Association, a civil society group, and he had just left the township to travel to the state capital, Taunggyi, where he spoke to IRIN.

“Even though they signed a ceasefire, the Burmese army sends in more soldiers than before,” said Sai Sein Myint, referring to Myanmar by its former name, Burma.

A sign in the Shan State capital of Taunggyi proclaims a motto of the Myanmar military, which is kno 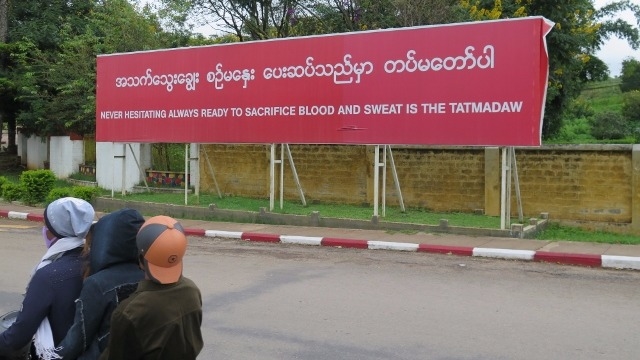 Other civil society activists are equally suspicious of the NCA, which many have pointed out is not truly “nationwide” since it includes only a minority of the scores of ethnic armed groups in the country, and follows the signing of previous accords that have been violated frequently.

“They already signed again and again, but they don’t keep the agreement, so it is not important for me,” said Mork Kham Hseng, a member of the Tai Youth Organisation.

In addition to those displaced by fighting over the past week, about 100,000 people live in displacement camps in northern Shan and neighbouring Kachin State, according to the United Nations.

SEE: Hunger in the jungle as Myanmar blocks aid

The government has touted the NCA as a big step towards peace. At the ceremony today in the capital, Naypyitaw, President Thein Sein called it a “historic gift” to future generations. The state-backed Global New Light of Myanmar newspaper trumpeted the accord this morning with a front page headline reading, “Peace starts now” in capital letters.

Sai Oo of the SSA-S is not so sure.

Even though the SSA-S will sign the agreement, which it hopes will pave the way for political dialogue to advance ethnic minority rights, he said expectations are low. Instead, the main reason the group decided to join the accord was due to what it perceives as pressure from the international community.

Since hanging up their uniforms and forming a civilian political party, which holds a majority in parliament and is bolstered by support from the 25 percent of seats constitutionally reserved for military officers, members of Myanmar’s former junta have achieved a remarkable make-over. They have transformed themselves from international pariahs into donor darlings.

And there have been real changes. Myanmar has released political prisoners, and lifted restrictions on freedoms of the press, speech and civil society. The government has allowed new political parties to form and freed Nobel Laureate Aung San Suu Kyi from house arrest, where she had been relegated for her role as a leader in the pro-democracy struggle. She won a parliamentary seat in a by-election in 2012 and her National League for Democracy party will contest next month’s national elections.

In response, the United States suspended most of its economic sanctions, while European Union and countries including Australia and Canada have lifted them entirely. Aid money has poured into the country and the international community has backed the government’s attempts to negotiate peace. The European Union provides funding to the Myanmar Peace Centre, which the government set up to handle negotiations.

Ethnic armed groups have received no such funding, and Sai Oo said the international community is today less likely to see groups like his as freedom fighters.

“If we don’t sign, the foreign community will blame us and say we are rebels, no better than ISIS,” he said.