Blanca María Riobó, 60, is sitting on the side of a dusty road on the outskirts of Villa del Rosario near Colombia’s border with Venezuela. It is one of dozens of well-trodden paths known as “trocha” used to cross this historically porous border.

She has been waiting for hours in the shade of a bush, near the Tachira River, which she traversed at low-tide this morning. Volunteers and the Colombian police helped to pass her stuff across the river during one of the few moments Venezuela’s Guardia Nacional left the area unguarded. Many others also took advantage of the opportunity, forming a line as they passed bricks, bicycles, cribs, sofas and TVs across the water.

Riobó’s belongings – a small fridge, a gas stove, her bed and mattress, a shelf and a set of aluminium pots – are now piled on the ground like rubble.

"I am waiting for a truck to take my stuff,” she says.

Riobó is among thousands of Colombians who have abruptly returned to their country following a crackdown by Venezuelan authorities. Venezuela accuses Colombian migrants of smuggling government-subsidised petrol and other goods across the border.

On 22 August, Venezuelan President Nicolas Maduro ordered the closure of a section of the border and declared a state of emergency in several border provinces after a scuffle between smugglers and security forces left three Venezuelan soldiers and a civilian dead. Since then, more than 1,000 Colombians have been deported. At least 10,000 more have returned of their own volition, either fearing deportation or because their homes were set to be demolished.

Until last week, no real attempt was made to impose controls on the movement of people and goods across this border. Families often straddle both sides. Many people also live on one side and work on the other, their children crossing the Simón Bolivar Bridge to attend school. 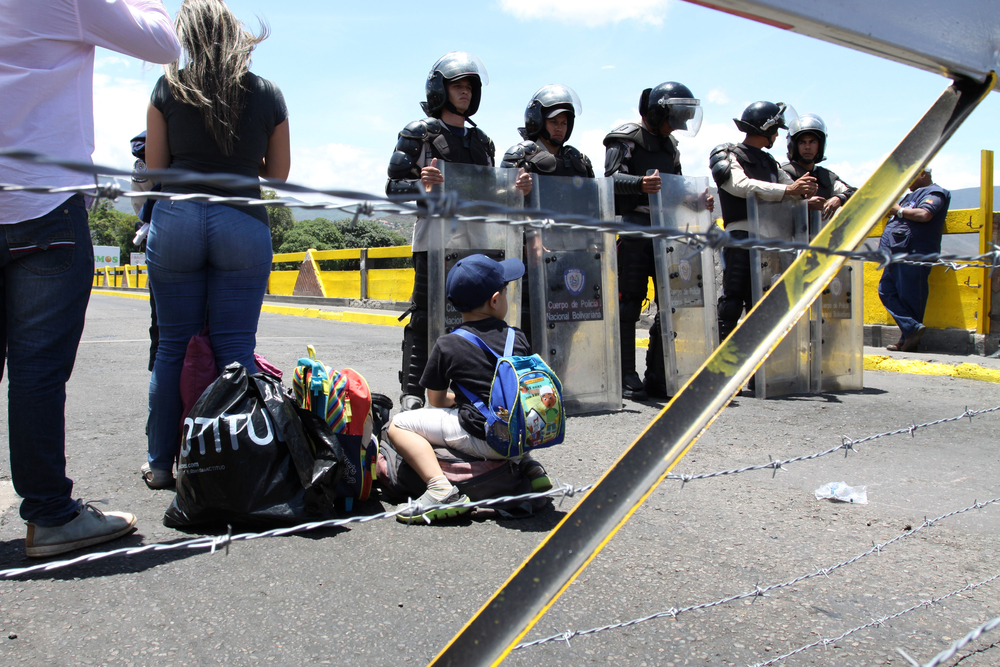 Riobó moved to Venezuela from Colombia 12 years ago and was working there as a cook when the Venezuelan military came and sprayed a “D” on her door last Friday.

The D was for “destruir” and meant her home in the invasiones (shanty town) of San Antonio, Villa del Rosario's twin town, was scheduled for destruction.

"The house was mine," she says, unsure where she will take its contents. She is a widow and her two sons live far away. Her only hope is that a friend in the nearby city of Cúcuta will take her in.

The sudden arrival of so many displaced people has unleashed a humanitarian crisis in the small town of Villa del Rosario and in larger Cúcuta, the capital of Norte de Santander state. So far, nine shelters have been established at schools, nursing homes and sport centres, hosting more than 3,000 people, according to the UN’s emergency aid coordination body OCHA.

"Every night we open a new shelter for 300 people, and it fills immediately," Diego García, a field worker with OCHA based in Cúcuta, told IRIN.

Despite the arrival of food, water and medicines from the government, NGOs and donations by locals, authorities are overwhelmed and coordination is proving a major challenge. On Saturday night, IRIN witnessed how 150 returnees were driven around in three different buses for four hours before being found space at a shelter at 3am.

"We are bewildered," said Daniel Pérez, who has been sent by the International Committee of the Red Cross from Bogotá, the capital, to evaluate the situation. "Nothing like this has ever happened on this border."

Pérez said that people were fleeing the threat of deportation, detention and abuse from not only San Antonio, but places in Venezuela some distance from the border, such as Barinas, Maracaibo and Merida.

By Monday, the Colombian Ombudsman Office (Defensoría del Pueblo) had received more than 1,200 complaints of human rights abuses from deportees and returnees and 1,000 cases of children being separated from parents or siblings.

Maduro has justified the deportations and the border closure by arguing that Colombian smuggling networks are responsible for the severe shortages of basic goods that have hit his country. Combined with a 200-percent inflation rate and worsening crime, the shortages are undermining popular support for Maduro’s United Socialist Party ahead of elections in December.

An illegal economy has long thrived on the Colombia-Venezuela border. "Trochas" are used not only by Colombians travelling back and forth to Venezuela for work and school, but are also the main corridors for smuggling cheap gasoline from Venezuela and narcotics – mainly cocaine – from Colombia. Both trades are largely controlled by Colombian paramilitary groups and corrupt Venezuelan Guardia Nacional officials.

Leidy Katerine Gómez, 20, is sharing a tent with her young son and her husband at a sports centre in Colegio Municipal in Cúcuta. "We sleep by turns to fan the child with a piece of cardboard. At night we are not allowed to keep the tent open," she says. 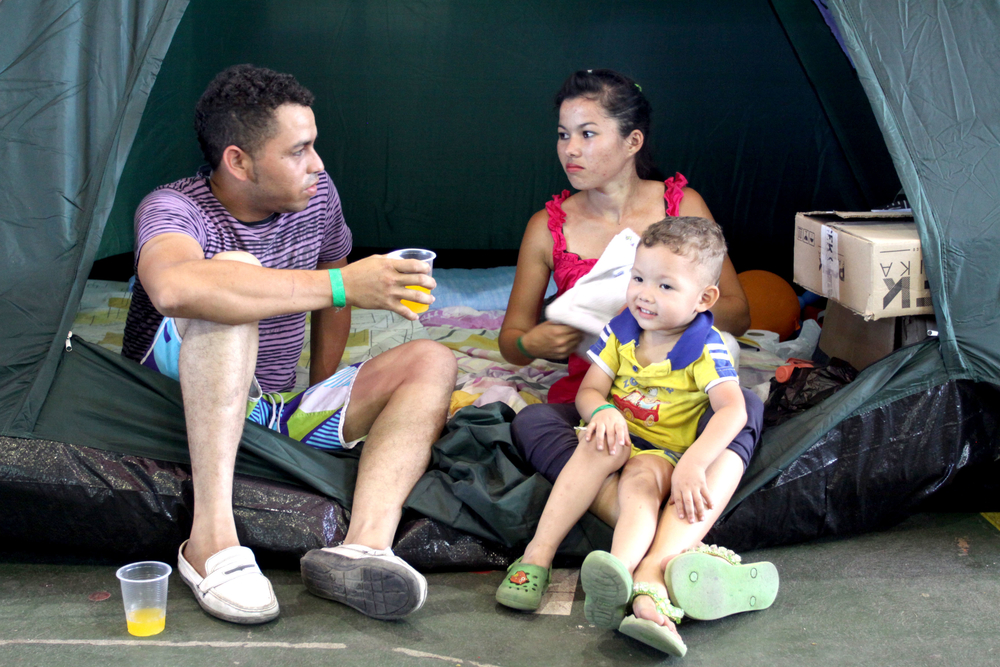 When Gómez was 13, she and her family were displaced from their farm in Abrego, a war-torn municipality in Colombia, and fled to Venezuela. They were granted refugee status there in 2010 and Gómez found a job making shoes in San Antonio.

Gómez told IRIN that she and her son, who was born in Venezuela, were arrested on Saturday while walking in the street near her home in the Cristo Rey neighbourhood, up in the hills of San Antonio. Her husband, who is Colombian and lacks refugee status, had fled across the border the day before. Gómez thought her refugee status would protect her from deportation. However, she was not allowed to go home to pack or collect her refugee documents but was moved to a military base, where she and her son stayed for more than 12 hours without food. The Guardia Nacional then dumped them at the Simón Bolivar Bridge where Colombian authorities picked them up.

Among the deportees and returnees, the authorities have identified at least 100 with refugee status.

Currently neither Gómez nor her son has any documents. She says the Venezuelan immigration police took their ID's and never returned them.

Gómez, like nearly all the returnees IRIN spoke to, said she would not go back to Venezuela and could not return to Abrego, where her family had been threatened by guerrilla groups. She said she and her husband would look for a way of staying in Cúcuta. “We can manage if we get at least a bit of help (from the government),” she told IRIN.

On Friday, President Maduro extended the state of emergency to four other municipalities in Tachira and deployed 3,000 soldiers to the border. With no diplomatic solution in sight, a source told IRIN that the Venezuelan government intends to extend its deportation operation all along the northern section of the border.

"So far, the Colombian government has responded," said Perez from ICRC. "What we don't know is how long it can sustain the effort."