Looking across the skyline of Mercedes in Argentina’s Buenos Aires province, the first thing to strike your eye is the number of tents perched on people’s roofs. After the worst flooding to hit the city in decades, the tents aren’t just a refuge from the murky water below, they’re also a good idea if you want to ensure no one helps themselves to your belongings.

The sun is shining again in the Pampas. The Luján, Salado and Arrecifes river basins are finally receding after weeks of torrential rain filled them three or four times above their normal levels. More than 10,000 evacuees from around the province are returning home. They will not be able to simply resume their lives as before. If not lost entirely, their properties will be severely damaged, and they face the added challenge of keeping their families healthy in far from sanitary conditions.

Guillermo has pitched his tent on the mud a few metres away from his inundated house, on higher ground next to the railroad. He is living in it with his two oldest children while they wait for his wife and little baby to return. They are staying at a shelter “until it dries up and it’s safe for them to come back,” he explains.

He smiles bitterly as he tells IRIN how his television was washed away. “What the water doesn’t steal, stray hands will,” goes the oft-heard expression during these floods. Guillermo, like many others, is leaving nothing to chance and is staying put so nothing else is lost.

The government and NGOs are hard at work trying to get people’s lives back on track. Local official Andrea Bozzini tells IRIN that every family has been given a special kit to help them start the clean-up process. The government will also continue to distribute meals, drinking water, blankets and other basic necessities in the coming days, she says.

By Sunday morning only 68 of the 500 or so evacuees remain in the two official shelters in Mercedes. They are all women and children planning to return after lunch to celebrate the end of Argentina’s Children’s Day in their own homes.

The next weeks and months will not be easy for many, especially in the poorer neighbourhoods that suffered the most damage. Here, people with limited means will struggle to recover any time soon. “I cannot afford another week off work,” says Hernán. The construction worker is forlorn. He had been about to build a new more robust house for his family, but all his materials, like his home, were washed away in the flood.

The government has announced an increase in pensions and welfare payments for those affected, as well as extra tax credits and exemptions. This is something at least, but for those who have lost everything, it is little recompense.

When the rains came

In early August, more rain fell in just two days in the provinces of Buenos Aires and Santa Fe than normally falls in an entire month. Worst-hit were the cities of Luján, Mercedes, Salto, Lobos, Areco and Arrecifes. Floodwaters in the middle of town reached a height of 1.8 metres in some cases. At least three people died, more than 10,000 were evacuated and 20,000 affected.

Flooded house in Mercedes, in Buonos Aires province of Argentina 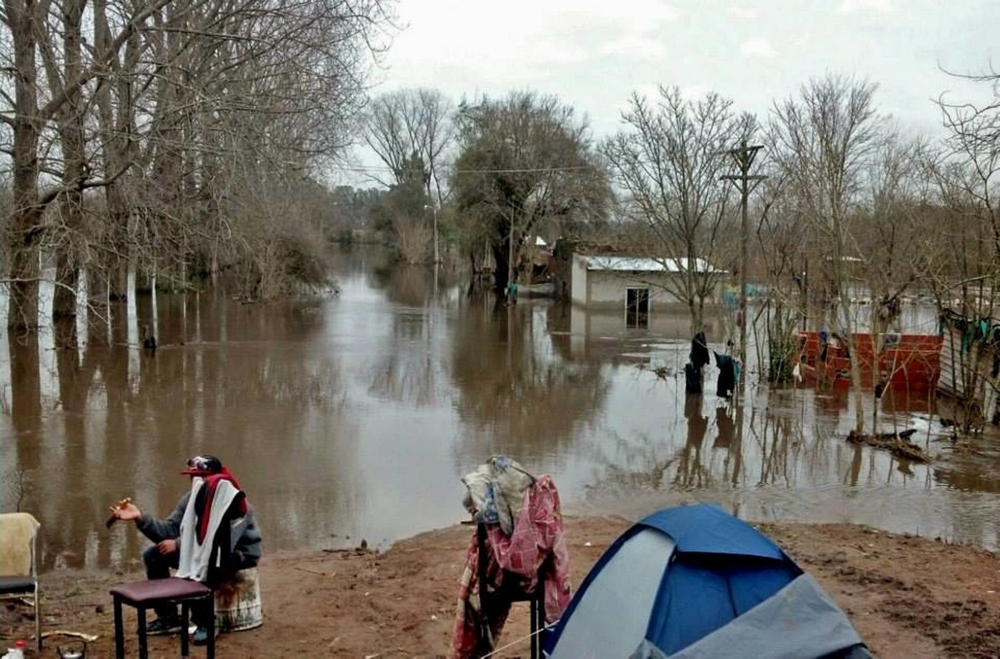 Mercedes suffered its worst flooding since 1985. The civil defense authority received its first emergency calls as dawn broke on 10 August. By eight o’clock in the morning, there had been more than 100 requests for assistance. It was left to volunteer firefighters to rescue those trapped by the rapidly rising water. Strong currents made it impossible to use anything else but motorised boats. “People know what to do when we arrive. They have learnt from previous catastrophes,” Alfredo Gutiérrez, the deputy head of the firefighters, tells IRIN ironically.

Another firefighter, Sebastián Cossi, recalls how difficult it was to reach those who had actually dialled in for help because the rescue teams kept finding other people in need along the way. After 15 hours, the teams had rescued some 200 people.

A sense of solidarity among “dry citizens” developed quickly after the emergency became publicly known. NGOs, scout groups and national football clubs joined forces to collect and distribute donations in an amazing logistical effort. One group worthy of mention calls itself “Friends of the Belgrano Railway.” They use carts on the rail system to access isolated areas, transporting both people and supplies around the stricken region.

An important role is also being played by so-called “organised individuals,” a campaign led by social media that sees ordinary Argentinians lend a hand in any way they can. Examples are countless. “We couldn’t just watch it on TV,” says Inés, a young professional from Mercedes who lives in the capital Buenos Aires. She and a group of friends arrived in Mercedes on Sunday morning with a lorry full of donated supplies.

Although nature is obviously largely to blame, there is anger here too at what people percieve as official incompetence and corruption. The anger is particularly acute as this disaster comes just two years after more than 80 people died in similar flooding – communities are left wondering why the lessons of past tragedy haven’t been learnt.

Back in April 2013, the last time disaster struck, the region’s infrastructure, including drainage systems, was found wanting and yet little has been done to improve it. The risks of deforestation and urban development on floodplains without necessary environmental controls are equally well known and yet such practices have continued unabated.

And, just as was the case a little more than two years ago, the politicians didn’t even wait for the floodwaters to recede before they started blaming each other for the disaster.

To add a little extra spice this time around, the Governor of Buenos Aires province – who rushed back from a trip to Italy after the scale of the crisis became clear – is Daniel Scioli, frontrunner to succeed Cristina Fernández de Kirchner as Argentina’s president after elections in October.

The people of these fertile lowlands will be disappointed but not entirely surprised if the politicians’ promises of investment and reform – as well as the payoffs to the disaster victims – dry up not long after the elections.