Hundreds of migrants sit in the underpasses in front of Budapest’s Keleti station on a balmy Sunday morning. Every couple of hours, a few dozen rouse themselves and look up at the departures board, waiting for the platform number for the Vienna train to appear above.

The stakes are high.

Last Monday, more than 200 undocumented migrants, mainly from Syria and Afghanistan, were ordered off the train at the Austrian border. Some of the group, which included 27 children, subsequently applied for asylum. Others were charged with staying in Austria illegally and given written orders to leave.

The first challenge is to get on the train.

Police at Keleti Railway Station in Budapest, Hungary, on the look out for undocumented migrants trying to board trains. 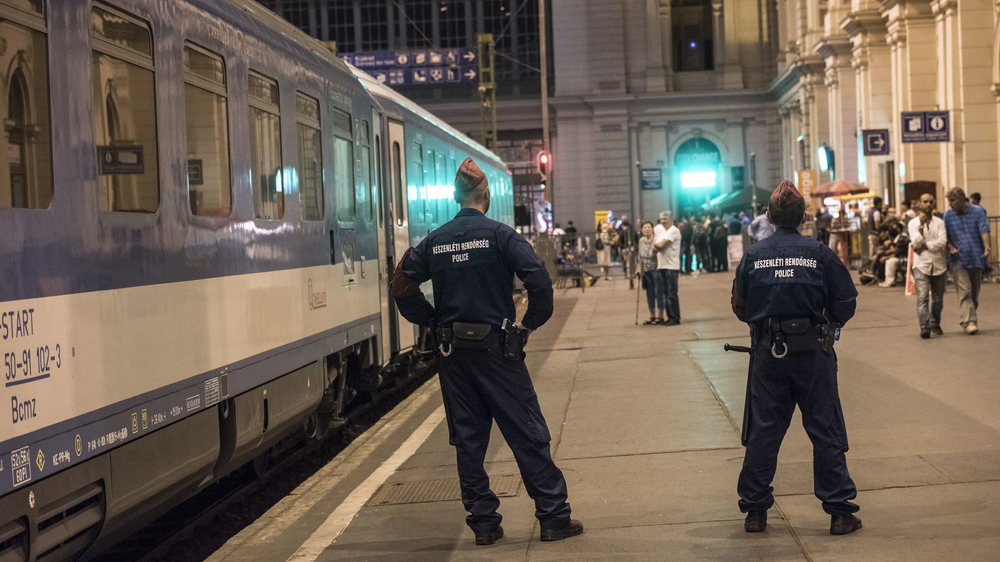 The Hungarian police have stopped thousands of migrants at Keleti station in the last month alone. Policing is sporadic, however, and it is still possible to evade capture in the rush that follows a train pulling in. On this occasion, the police play cat and mouse with some of the migrants. A young African man is prevented from boarding and marched off.

The train is crowded and the migrants sit tensely in the intersections between carriages, rubbing shoulders with relaxed backpackers. The train stops for five minutes at Hegyeshalom, at the Austrian border. Three policemen amble up and down the platform. They don’t board. The train continues on to Vienna without incident. This group has been lucky.

Fazal, a young man of around 20 travelling with a group of five other Pakistanis, shows IRIN his ticket. The destination reads Traiskirchen, the location of one of Austria’s two initial reception centres for asylum seekers, 15 miles south of Vienna.

Fazal clearly has other plans: “How many hours until Munich?” – the city in southern Germany that is the ultimate destination of the train - he asks. “We don’t talk now. Only off the train,” an older member of his party says, pulling him away.

Relations between Austria and Hungary have been tense in recent months. Hungary has been overloaded by an influx of asylum seekers crossing its border with Serbia along the so-called Western Balkan route from Greece. In June, Hungary threatened to stop accepting migrants returned to the country under the Dublin Regulation, which stipulates that asylum seekers must be processed by the first country that registers them. It was widely reported that the Hungarian ambassador to Vienna was then summoned to the Austrian interior ministry. The following day Hungary withdrew the threat.

In a public show of solidarity two weeks later, the Austrian, Serbian and Hungarian interior ministries announced plans for a joint border force to stem the flow of migrants into the European Union from the Balkans. Karl-Heinz Grundboeck, a spokesperson from Austria’s interior ministry told IRIN that the cooperation was going well. “We have 80 police officers from Austria supporting the border authorities,” he said.

Ruth Schoeffl, a spokeswoman for the UN’s refugee agency, UNHCR, in Austria, said that the increasing popularity of the Balkans route had inevitably increased arrivals to Austria, which unlike Hungary is not a transit country, but a preferred destination for many.

More than 4,000 migrants are crammed into the reception centre in Traiskirchen, which has beds for just 2,300 and is accommodating others in tents. The overcrowding is apparent even from outside the camp complex, where hundreds of Afghans and Syrians line the pavement. “The conditions here are very bad,” says a Syrian man. “Everyone who arrives now is sleeping outside. Some don’t even get tents and have to sleep under trees. When I came to Europe, I thought it would be better.”

Journalists are not generally allowed inside the camp. “They say it’s because they don't want the refugees to be photographed,” Anna Radl, a spokesperson with the charity Caritas, which provides support to migrants and refugees, tells IRIN. “But we’re not allowed to go into the camp to talk to them either.”

An asylum seeker family rest under a makeshift shelter at Traiskirchen reception centre near Vienna. Some 4,300 are currently registered at the camp, and more than 1,000 do not even have use of a tent. 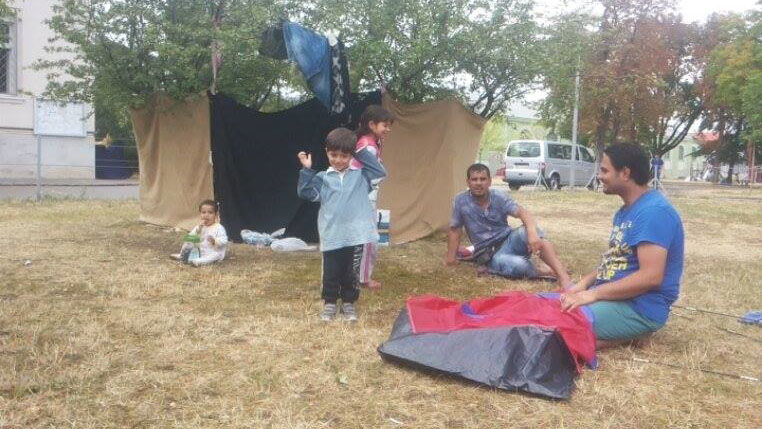 Such is the severity of the overcrowding at Traiskirchen that the town’s mayor Andreas Babler organised a protest march to the interior ministry building in June. He has urged the Austrian government to reduce the number of asylum seekers at the centre and called the interior ministry’s tent solution “unlawful”.

While many locals are resentful that the town has to house the camp – some pelted residents and activists recently with eggs – others have been donating clothes and toiletries to Caritas for distribution to the asylum seekers.

"People in Traiskirchen are really open, and especially want to help now that there is such a difficult situation there," says Radl.

Austria’s system of shared responsibility for asylum seekers requires the federal government to register initial applications and then leaves it up to the regional authorities to find accommodation for them while their cases are processed. But many regional authorities have been reluctant to do so, leaving more and more asylum seekers to languish at the initial reception centres at Traiskirchen and Thalham in Upper Austria.

“To be very frank, it is not the federal government that is to blame for the lack of places,” said Grundboeck. “What is not working is the transfer [to regional accommodation].”

To relieve the pressure on Traiskirchen in particular, the Austrian government has negotiated a deal with neighbouring Slovakia to accommodate 500 asylum seekers at a former university building in Gabcikovo until their applications are processed. The first 50 asylum seekers arrived in Slovakia in July, with 200 more to follow in August and the remaining 250 in September. Austrian Interior Minister Johanna Mikl-Leitner has spoken of trying to extend this existing two-year plan.

“[We] need temporary solutions (right away) while we work on long-term ones,” said Schoeffl of UNHCR. “But we hope that the government of Austria, which is a wealthy country, will look at using hotels or other buildings. We would rather have people in proper buildings.”