Read about what we achieved.
AMMAN/DUBAI

The conflict in Yemen is worsening the country's food insecurity, according to a new report, which predicts that the parts of Arab state may enter an emergency phase by the end of the year.

The Famine Early Warning Systems Network (FEWS NET) is forecasting that Yemen will be at “PHASE 4: Emergency” by November, meaning “at least one in five households face extreme food consumption gaps resulting in very high acute malnutrition or excess mortality.”

“The ongoing conflict and naval blockade are restricting imports of food and fuel, driving up prices,” noted the FEWS NET report, published on Wednesday.

“Concurrently, most key household income sources are believed to be affected, including formal salaries, agricultural wage labor, petty trade, and livestock sales, with some disruptions to remittance flows reported.”

Christopher Hillbruner, of FEWS NET, told IRIN there was an expectation that Yemen could reach PHASE 4 before November.

Even before this latest round of conflict, nearly half of Yemen’s population of 26 million was ranked food insecure. A small oil producer with weak infrastructure and limited water and electricity supplies, the country imports 90 percent of its food and the majority of its fuel.

Conflict in 2010 drove up malnutrition in parts of Yemen to crisis levels, and rising poverty since the Arab Spring protests of 2011 means millions simply do not have enough money to feed themselves.

Smoke after an airstrike in Sanaa, Yemen, on morning of Tuesday 12 May.

Airstrikes by a Saudi Arabian-led coalition on Houthi rebels – which it claims are proxies of regional foe Iran – have compounded the situation, as have the coalition warships preventing supply boats from docking at ports

According to a report published on Wednesday by the International Federation of Red Cross and Red Crescent Societies (IFRC), the conflict has killed 1,820 people and wounded 7,330, while more than half a million have been displaced.

The UN’s office for co-ordination, OCHA, reports widespread destruction to civilian infrastructure and according to the UN's Children's Fund, UNICEF, dozens of schools have been affected by the conflict, either hit by shells or taken over as emergency refuge by displaced families.

In the northern city of Sadah, preliminary satellite imagery analysis indicates more than 1,000 structures have been affected, damaged or destroyed by the recent conflict, and 35 large impact craters are visible, many close to the city’s airport runway.

As fuel imports and distribution have been curtailed, shortages have grown more acute and companies have struggled to transport the food already in the country to market places and communities. Agriculture has also been disrupted by the violence and displacement.

Last week, a five-day humanitarian pause allowed some food and fuel in. But this came mostly from aid agencies, whose goods only make up a tiny proportion of the normal supply chain.

During the truce, which ended on Sunday evening, the UN’s World Food Programme says it distributed food for more than 400,000 people in Aden, Lahj, Abyan, Al-Dhale'e, Shabwa, Hajja and northern parts of Sa’ada, although this fell short of the 738,000 people it had hoped to reach.

A number of other UN agencies and NGOs also carried out distributions of food, water, fuel, and supplies, but were unanimous in saying five days was not long enough to reach everyone in need.

Save the Children teams in Yemen assist newly displaced families in Amran City. May 2015 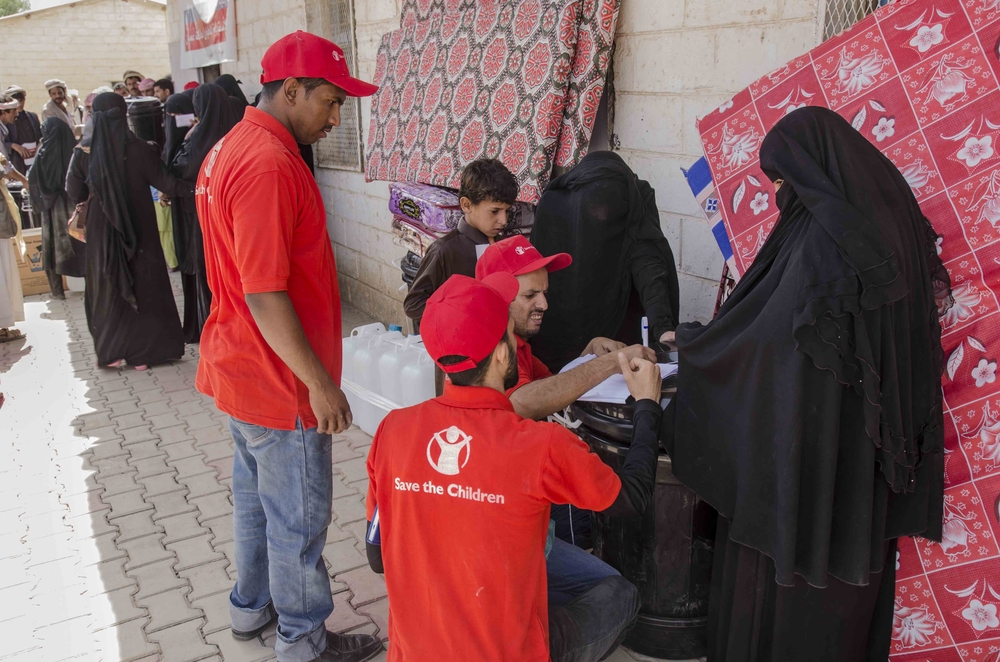 Access to affected communities has been significantly curtailed since the start of the conflict, due to a number of targeted attacks on health workers. On Thursday an airstrike hit an office of an aid organisation in Sana'a, killing at least five people, including some Ethiopian refugees.

The reliance on imports makes the effects of the ongoing conflict especially crippling – commercial deliveries in addition to aid supplies have been blocked from entering port, and the lack of fuel for generators has meant some hospitals have had to close, despite a surge in people needing treatment after being hit by bombs or gunfire.

“This crisis won’t be over even if people stop shooting”

Many businesses in the capital Sana’a have shut down as residents flee both the Houthis and the airstrikes. Likewise, most foreign companies and embassies have shuttered their operations due to security fears, and those that have remained open are barely functioning due to fuel shortages.

“The government has run out of money, the Central Bank has few dollars to pay for imports and is not giving other banks dollars, people have no money to spend, and we don’t have the fuel to run our factories even if they did,” one Yemeni business owner told IRIN.

“Even if we get a peace process and fighting stops, which looks unlikely, that is going to be a problem. The government will need many billions of dollars just to be able to pay for the cost of importing fuel and to pay for basic wages and get electricity and fuel up and running again. This crisis won’t be over even if people stop shooting.”

In a survey conducted in April by the Small and Micro Enterprise Promotion Service (SMEPS), 93 percent of respondents said the business environment had descended to unprecedented lows, with 70 percent of large- and medium-sized businesses saying they were pessimistic about seeing any improvement.

The UN has announced plans to begin “inclusive consultations” next week aimed at restoring momentum in Yemen’s political transition. But there is little optimism that a longer-term ceasefire is imminent.

“This is still very much in the early stages”

“This is still very much in the early stages. We’re not even talking about negotiations, rather a consultation about how to reach an agreement between the key parties about how to move forward,” explained Adam Baron, a visiting fellow at the European Council on Foreign Relations (ECFR).

Given the “intractable nature of the conflict,” Baron said a quick resolution was unlikely, but he agreed that “the fact that there is a tentative agreement for everyone to come to the table” was a “positive sign”.

“You are basically facing two choices in Yemen right now,” he added. “There can be a political solution, or we can look at an extended war of attrition that will end in the entire country being destroyed.”