More than 2,000 Zimbabweans displaced by xenophobic attacks in South Africa have packed their bags for home. But Zimbabwe, a country teetering on the verge of economic collapse, is unlikely to offer them the means to restart their lives.

The attacks on foreigners - mainly Zimbabweans, Somalis, Malawians, Mozambicans and Nigerians - started in Durban more than two weeks ago following comments by Zulu King Goodwill Zwelithini, suggesting that African migrants in South Africa were criminals who should go back to their countries and stop stealing jobs and opportunities from locals.

Machete- and gun-wielding South Africans burned foreigners’ businesses and homes, looting goods, and forcing their inhabitants to flee. Six foreign nationals died in the attacks, which spread from Durban to other parts of the country, including Johannesburg. The worst of the violence has, for the most part, subsided, but African migrants are well aware that they could re-surface at any time.

Several countries, including Malawi, Mozambique and Nigeria, have tried to evacuate their citizens from affected areas, but Zimbabwe, which has by far the largest number of nationals living in South Africa, is faced with the biggest challenge. Over years of political and economic upheaval in Zimbabwe, some 1.5 million Zimbabweans are thought to have made the trek south in search of safety and better opportunities. Zimbabwe has set up an inter-ministerial rescue taskforce to repatriate several thousand of them.

Labour and Social Welfare Secretary Ngoni Masoka told IRIN that the Zimbabwean government expected to receive some 2,400 returnees who had opted to return home following the attacks, but added the actual numbers returning could be higher.

“We are getting constant updates from our embassy in South Africa. There could be Zimbabweans who might have decided not to approach us for help for various reasons, so it is difficult to know how many are coming back exactly,” he said.

The first batch of 433 returnees arrived last week in government-provided buses at Beitbridge border post from a Durban transit camp where they were being housed following the attacks. According to Masoka, the taskforce is determining their needs, qualifications and destinations so they can be referred to provincial and district welfare officers for help with reintegration. The Zimbabwe Red Cross Society and the International Organization for Migration (IOM) are providing returnees with food and other essentials, while specialists are offering counselling and medical attention.

Masoka declined to say whether the government had set aside a budget for the returnees.

Jairos Mangwanya, 36, is under no illusions that life back at home will be easy. He was among the first batch of returnees last week, but decided to hitchhike to Harare, the capital, after becoming impatient with delays getting on a government bus. He left his pregnant wife and two other children to follow on the government-provided transport and went ahead to organise them some temporary accommodation.

Mangwanya had worked in Durban as a teacher for the past eight years. He fled with his family when Zimbabweans at a neighbouring house were attacked and their belongings looted.

“We didn’t have the time to pack our belongings because the attackers were coming to our house. We only took some blankets and clothes and fled to the police station. We left our passports, educational certificates, money and other vital belongings behind,” Mangwanya told IRIN.

“That means we have virtually nowhere to start from. I can’t look for another job without my certificates and I know it will be a long time before the examinations authorities and birth registration officials here can replace my documents.”

Finding a place for him and his family to stay in Harare will be tough. Space at his two brothers’ homes is already limited.

“My brothers say my wife and the two children will go to one of the houses and I to the other. That must be for a short period, though, because they also have large families and dependants from the extended family,” said Mangwanya.

The other option is to take the family to their rural home in Mount Darwin, some 200km away from Harare. But going there will greatly reduce his chances of being able to provide for his family or of his two children being able to attend school.

Mangwanya left South Africa before receiving his April salary and is likely to forfeit his pension and other employment benefits. 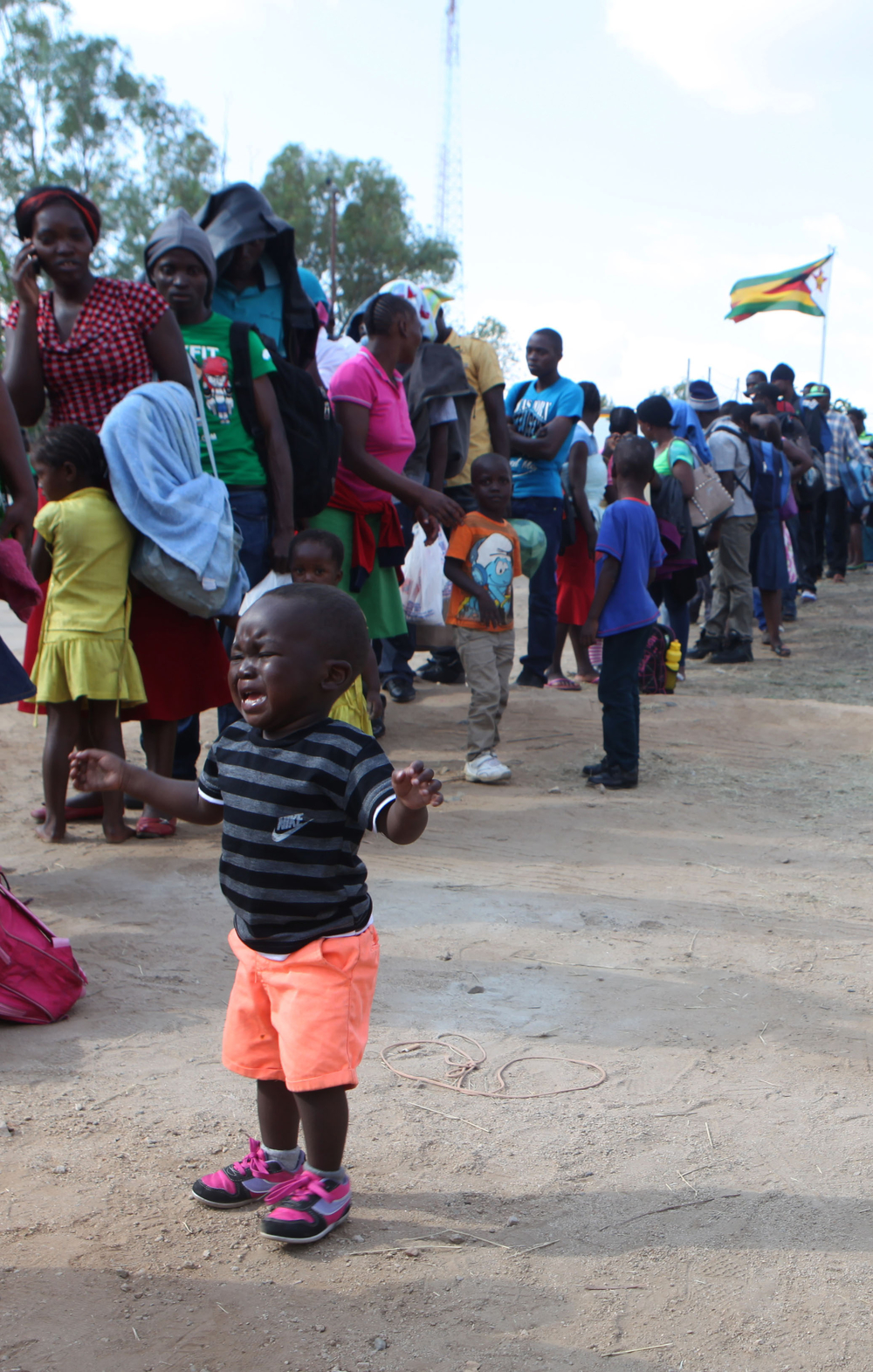 Trynos Musumba, 41, who was travelling from Beitbridge with Mangwanda, had been working as a plumber in Durban and sending part of his earnings to his 70-year-old mother and unemployed sisters in Zimbabwe. He left his South African wife and four-year-old child behind in Durban.

“With my return, it means no one will be able to fend for my family here. My wife is not employed and she will find life tough. I might have to look at ways of going back to a safe city in South Africa and looking for another job,” he told IRIN.

His mother, who is diabetic, and the rest of the family live in rural Mhondoro, some 50km west of Harare. The area is one of many in the country to have suffered crop failure this year following poor rains.

They fled Zimbabwe to look for better opportunities and are returning home to the very economic crisis they tried to run away from.

“This is a very bad situation being made worse for the migrants,” said John Robertson, an independent economic analyst. “They fled Zimbabwe to look for better opportunities and are returning home to the very economic crisis they tried to run away from. The situation could actually be worse than when these people went away.”

He added that unofficially, unemployment in Zimbabwe is close to 80 percent, despite official figures putting it at 11 percent.

Japhet Moyo, secretary general of the Zimbabwe Congress of Trade Unions (ZCTU), told IRIN: “Most of the companies have closed down and the few that remain are struggling. Worse still, government cannot absorb [those being laid off] because it doesn’t have the money to employ more people.”

Robertson said it was unlikely that the social welfare department would help the returnees in any meaningful way. “Our government has never had an unemployment benefit scheme or social security policy and is too broke to fund any intervention to help the returning Zimbabweans re-integrate. It will thus leave everything to the extended family, hoping that relatives will cushion the returnees.”

Musumba said that on the bus he took home with other returnees “many said they will never return to South Africa to look for jobs, but I know as soon as there is peace, they will go back because the situation in our country is so bad.”

Gabriel Shumba, a South Africa-based human rights lawyer who heads the Zimbabwe Exiles Forum (ZEF), said some 2,000 Zimbabweans remained in camps near Durban. Although churches, NGOs and the South African government are providing some aid, many are still in need of food, clothing, counselling and medical attention.

“The situation remains precarious. There is need for the humanitarian community to scale up support for the people in camps,” he told IRIN.

Shumba said his organisation was working to provide legal assistance to those who had been attacked or their property looted in an effort to ensure perpetrators could be arrested and brought to justice. South African authorities have a poor record of prosecuting perpetrators of past attacks.

He added that he did not believe repatriating victims to Zimbabwe was the answer, arguing that it “would embolden the attackers and encourage more attacks”.