The risk of people being displaced by natural disasters has quadrupled in the last 40 years and, unless governments adopt national and global plans to address the main drivers of displacement, increasing numbers of people will lose their homes to floods, earthquakes and landslides in the future.

This is the main message of a report released on Thursday by the Internal Displacement Monitoring Centre (IDMC) ahead of the third World Conference on Disaster Risk Reduction due to take place in Sendai, Japan in the coming days. UN member states are expected to adopt a global plan to reduce disaster risk that will build on the Hyogo Framework for Action adopted 10 years ago.

The Hyogo Framework addressed disaster risk reduction but not the risk of being displaced by a disaster. Since then, hundreds of thousands of lives have been claimed by “mega-events” - earthquakes, tsunamis and cyclones - and there is growing awareness of the need to include disaster-related displacement in future agreements.

The IDMC report measures displacement risk by assessing how vulnerable a particular population is when exposed to a hazard. It concludes that places where rapid and unplanned urbanization has concentrated large numbers of people in areas prone to frequent and severe hazards will continue to bear the brunt of disasters.

Small, under-developed island states such as Haiti and the Philippines top the report’s risk index for future disaster displacement while south and southeast Asia are the regions where displacement risk is predicted to continue increasing.

“Haiti is one of the countries where we’ll see continuous displacement unless something drastically different is done,” IDMC’s director, Alfredo Zamudio told IRIN. “Small islands are going to be very much affected because of the frequency and intensity of the hazards, but things can be done to reduce vulnerability.”

He pointed out that around the same time Haiti experienced its devastating 2010 earthquake, his home country of Chile was much less impacted by an earthquake of even greater magnitude. “The difference was that in Chile they had a building code that started to be implemented in the early 1960s and they respected it. So when the big earthquake came, it gave people more time to get out of the buildings and made them more flexible. So that legislation saved lives.”

By contrast, there was a lack of building codes in Haiti where poor access to land and livelihoods also forced people to live in unsafe areas.

Displacement by disasters is highest in Asia 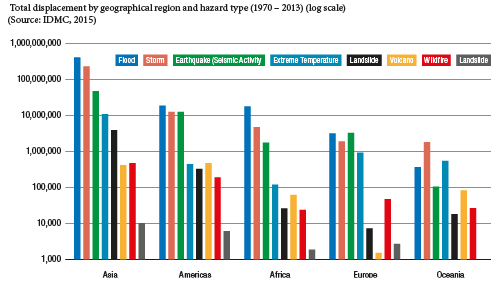 “Economic growth for a country is not sufficient [for reducing displacement risk],” added Zamudio. “It’s a question of development and governance and providing people with rights so they can themselves find better solutions.”

The study also found that nearly a third of pastoralists in northern Kenya, southern Ethiopia and south-central Somalia could be permanently displaced in the next 25 years due to drought, even without the increased risk resulting from climate change.

The report notes that although climate change is expected to contribute to more frequent and extreme hazards in the future, it has not been a significant driver of displacement up until now. The biggest driver in recent decades has been rapid, unplanned development in hazard-prone areas of poor countries where weak or corrupt governance structures encourage people to live in dangerous locations. Conflict can further undermine the ability of vulnerable communities to protect themselves from, and cope with, disasters.

Relocating at-risk communities out of harm’s way, as the government in the Philippines is attempting to do in the wake of Typhoon Haiyan, which displaced four million people in 2013, is a strategy fraught with potential pitfalls. A recent report by Refugees International found that the post-Haiyan resettlement policy had been poorly planned and implemented and had left affected populations “more, not less vulnerable”.

“Resettlement has to be well-funded and done in cooperation with the people affected,” noted Zamudio. “If resettlement is moving people to areas where they won’t have access to livelihoods and services, then it won’t be improving their lives.”

Reducing the risk of displacement from disasters will require states to address a whole range of issues, from better urban planning to improving access to land and livelihood opportunities. “One single policy won’t solve the problem,” said Zamudio.