Abdullah's wails of pain are punctuated only by his rasping cough. His arms bound to his body, he is five months old but weighs just 3.2kg, lighter than some newborns. In the next bed, three-month old Shukoria looks withered and worn, her face wrinkled and pained.

Both are suffering from malnutrition, which affects more than 40 percent of Afghan children, killing thousands every year and leaving millions with permanent disabilities.

"Malnutrition is the main reason for deaths of children under five in this province," Homayoun Zaheer, head of the Jalalabad hospital, said, pointing to the children.

A government-backed report highlighted the extent of malnutrition in the country, yet experts say efforts to tackle the problem are hampered by cultural norms, shrinking health budgets and the short-term nature of aid donations.

While Afghan malnutrition rates have long been high, until recently they had, many aid workers agree, been something of a hidden problem as there was - and still is - a lack of evidence about the scale of the problem.

The issue was therefore often neglected when aid was doled out. Since 2007 the country has been the world's leading recipient of development assistance as a percentage of its national income, with US$6.2 billion in 2012 alone. Yet that spending has focused on governance and security, and while new health infrastructure has been created, the extent of malnutrition has received little study.

Franck Abeille, country director at Action Against Hunger (known by its French acronym ACF) said that in the early years after the 2001 US-led invasion there was little focus on malnutrition. "ACF, for example, hardly worked on nutrition from 2003 up until 2006-07," he said.

The most recent National Nutrition Survey - the first in the country since 2004 - released late last year, showed that over 40 percent of Afghan children under the age of five suffered from permanent stunting as a result of malnutrition, while 9.5 percent of children suffered from wasting.

The number of children with severe acute malnutrition had more than tripled from 98,900 in 2003 to 362,317, while the estimated number of pregnant and lactating women requiring nutrition interventions had nearly doubled to 246,283. Acute malnutrition typically kills more quickly than chronic malnutrition, which is the world's leading cause of preventable mental disability.

The survey, coming alongside other new evidence, has helped prompt both the Afghan government and the UN to commit to focusing their resources on malnutrition, with the problem to be designated one of the three key priorities of the forthcoming Common Humanitarian Action Plan for 2015.

Yet the drive comes at a time when health resources are being squeezed. Under the country's Basic Package of Health Services (BPHS) healthcare system, international NGOs act as contractors to take on the basic provision of health services in a given district. As the Afghan government has faced financial cutbacks the BPHS budget has decreased, undermining malnutrition outreach programmes. In one province, the monthly budget per patient for all services dropped from 7 euros up to 2013 to 4.7 euros per patient per year in 2014, according to a report from ACF. 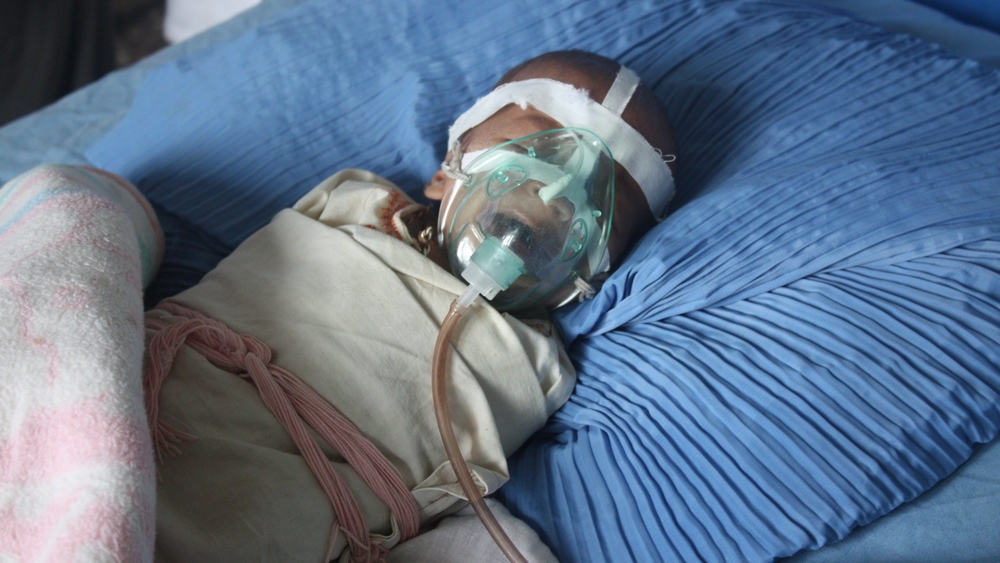 "The contract has a set amount of money per patient and the nutrition amount is too small to be useful as it doesn't allow for any outreach work to take place," Mark Bowden, the UN Secretary-General's Deputy Special Representative for Afghanistan and the Humanitarian Coordinator for the country. "So essentially nutrition has been ignored within the health system."

While all sides now agree on the severity of the malnutrition crisis, the solutions are less agreed upon.

Claude Jibidar, country director at the World Food Programme, said that one route he was pushing for is to fortify wheat - the staple of the Afghan diet - potentially with government subsidies.

"A lot of the micronutrient deficiencies would be immediately dealt with," Jibidar said. "You fortify with a pack of minerals and vitamins [dealing with] anaemia, iron, vitamin A and vitamin D deficiencies."

"To address the causes of malnutrition. the first [priority] is culture change - to change the mindset of people towards breastfeeding their children."

"People say it has an effect on the price - I am told it would cost about $4-5 dollars additionally per kilo. Even if it is 10 times that the benefit is worth it," he added.

Yet such a scheme, while potentially making older Afghans healthier, would only have a limited impact on the youngest.

Hamza Atim, Médecins Sans Frontières (MSF) medical coordinator for Boost Hospital in Lashkar Gar - in the contested Helmand Province where acute malnutrition is among the highest in the country - pointed out that many Afghan communities do not have a culture of breastfeeding their newly-born children.

Abeille pointed out that this can lead to stunting. "When a child is born, the first milk from the mother. is really the first thing the baby needs," he said.

"We treat children who are acutely malnourished in hospital - but this is only addressing the symptoms of malnutrition," Atim said. "If you need to address the causes you need to do a lot of things but the first [priority] is culture change - to change the mindset of people towards breastfeeding their children."

"Breastfeeding will stop children from getting a lot of illnesses. But this has gone on for generations, so it is a hard sell to address."

In Jalalabad, Zaheer said they had launched education schemes for the local population, including group sessions in which mothers are taught about health schemes, but admitted many women, particularly those in rural areas, cannot afford to come every week. "Poverty is the key issue here. Poverty and ignorance - it can be a vicious cycle," he said.

From humanitarian to development

A shift in attitudes on malnutrition may also help. While emergency humanitarian actors have prioritized acute malnutrition, development agencies are needed.

"You have figures for acute malnutrition that are above emergency levels - which is why we treat it as a humanitarian issue - but there are also major issues of stunting, which is largely a development issue," Bowden said.

Abeille echoed a number of other actors calling for long-term development funding to tackle the root causes of malnutrition.

"When you meet donors they say: 'one year is perfect, let's move forward.' When you suggest three or four years they say: 'I am not sure we can find the funds.' So next year we come back with the same problem."